LRT English Newsletter: Light at the end of corona tunnel? 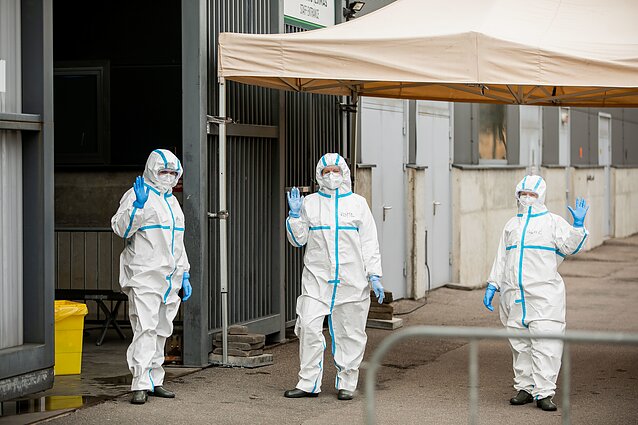 A month into Lithuania’s quarantine, the government published a document outlining a four-stage easing of restrictions plan for businesses (only). No word yet on the borders or when the actual quarantine would be lifted, though.

The first stage, approved on Wednesday, paves the way for some shops and service providers to reopen. Your hair will have to wait, however. Barbers and other services may be allowed to reopen in two weeks time as part of the second stage – providing all goes to plan.

And although the health minister previously said the spread of the coronavirus has stopped, the news from Nemenčinė, a town some 20 kilometres north of Vilnius, are worrying.

Nemenčinė became the first hotspot in Lithuania to be sealed off, with police, the Riflemen’s Union and the military blocking off entries and exits to the town of some 5,000 people.

It seems, a garment factory was the breakout point, where 19 workers became infected with the coronavirus. On Thursday, the government pledged to test every resident in the town.

It’s unclear yet whether it will derail the government’s quarantine easing plans. The health minister, as well as the PM, said earlier it would take some time to see if the movement restrictions imposed over Easter had worked. If not, a spike in coronavirus cases could mean more work at home in your PJs.

Or no work at all. Experts said that some 2,000 people were losing jobs every day, while retail workers were hit the hardest – almost every fourth newly unemployed person since March 16 had worked in the sector.

Strictly health wise, scientists at the Vytautas Magnus University in Kaunas say their analytical model calls for the quarantine (in some shape or form) to stay until July.

A previous hotspot town, meanwhile, says they have learned from their mistakes. A dispatch from Ukmergė by LRT.lt journalist Rytis Kazlauskas.

So, a month of quarantine has passed. If you were affected, here’s a timeline of then the financial instruments promised by the government come into effect.

Those holding the status of a creator – ie, actors, directors, painters, photographers, dancers, sculptors, and other artists – are also entitled to 607 euros (before tax).

If you’re a business owner or self-employed, follow these guidelines to claim government support, here.

In a more local move, Vilnius Municipality is offering its own financial support to residents of the Lithuanian capital. More info, here.

Meanwhile, the police are looking for explanations as to why MPs were able to have lunch in the parliament’s cafeteria. After all, restaurants and cafes had to close across the country during the quarantine. The police say the catering provider may face a fine.

The health minister’s suggestion that the quarantine was a good opportunity to reconsider abortion has also left several human rights NGOs asking questions. A petition, #NeMinistroReikalas (none of the minister’s business), calls for abortion services to be continued despite the lockdown. The petition has attracted around 6,000 signatured by Thursday evening.

Lithuania’s National Cyber Security Centre at the Defence Ministry published its annual review. Last year, they say, the disinformation and cyber attacks against Lithuania were growing in scale and becoming more sophisticated.

In one example, hackers nearly took down water supply in Lithuania’s second largest city, Kaunas. In other regular fake news and disinformation incidents, the goal was to “discredit Lithuania’s statehood,” as well as portray it as a “hostile state”.

Previously, the cyber security centre also warned of vulnerabilities in the videoconferencing Zoom app which has exploded in popularity since the pandemic.

On Wednesday, Lithuania’s Defence Minister Raimundas Karoblis said NATO troops also “fall victim” to coronavirus disinformation. The answer, he said, is more coordination between the EU and NATO, as well as raising the public’s resilience.

Estonia also published its yearly threat assessment earlier this week. The country’s e-residency scheme, according to the intelligence services, is prone to misuse and has seen applicants with “extremist and terrorist ties”.

Meanwhile, disinformation on TV screens as part of several Kremlin-linked media may come to an end, according to investigative journalists at Re:Baltica.

With museums closed, LRT and MO in Vilnius is kicking off a series about 20 key Lithuanian artists of the 20th century. First installment – Antanas Gudaitis. Take a look.

The pandemic has also had a curious effect on the art world. The highly mobile lot is now facing closed borders, and are forced to look closer to home. An interview with a Lithuanian curator, Neringa Stoškutė, here.

– Exactly 100 years ago, Lithuania held its first general election. With no media, campaigning had to be done in open-air markets and aboard horse-carts. Alcohol was also banned.

– In another LRT FACTS installment, we look at how the virus spreads and whether protective single-use clothing is safe to reuse. The investigation was sparked by a short-lived controversy when images of medics being forced to reuse plastic clothing sparked outrage on social media and led to a hospital director being temporarily dismissed.