Benefits for employers and workers – how to claim 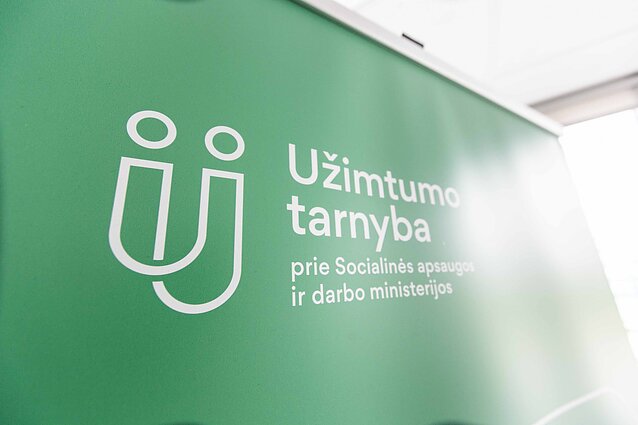 The Lithuanian Ministry of Social Security and Labour published guidelines on Friday on how to claim government support if you're an employer who had to declare downtime, a worker, or a self-employed person during the coronavirus crisis.

An employer has the right to announce downtime or partial downtime during a nationwide quarantine or a state of emergency, according to the ministry’s press release.

During downtime, an employee cannot be requested to go into work or receive less than the minimum wage, if employed under a full-time contract.

According to the ministry, employers can turn to Užimtumo Tarnyba (Employment Services) to seek support.

Here are the guidelines published by the government, edited for brevity by LRT English: 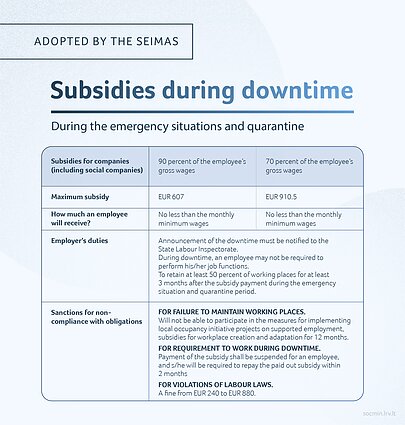 In order to get the subsidy, an employer has to submit a completed and signed claim to the Employment Services, including the copies of documents on the downtime imposed on the workers.

All forms are available on the website of the Employment Services. When applying for a subsidy the following month, supporting documents on employee wages will be required.

Obligations of the employer. When announcing downtime for the employee, the employer will have to inform the State Labour Inspectorate. It is prohibited to pay out a smaller wage to the worker during downtime, while requesting the employee to come in at work.

If it does happen, the subsidy will have to be returned by the employer within two months.

Employers who have used subsidies will also have to retain at least 50 percent of the workplaces for at least three months after the end of the subsidies.

Otherwise, the employer will not be able to participate in other economic measures.

Who may use the subsidies. During downtime, state subsidies may not be used by government-funded institutions, companies that are bankrupt or undergoing liquidation, and businesses that have received a fine from the Employment Services for illegal work, violations of foreigners' employment procedure or non-declared work, or an administrative fine for illegal work according to the Code of Administrative Violations of Law.

Businesses that have received more than one administrative fine for violations of employment legislation, legal standards on occupational safety and health, concealment of occupational accident, irregularities of the established procedure for notification and investigation, calculation of remuneration and payment, employment conditions for temporary employees, also commercial or business activity.

What to do if you’re an employer:

– Announce downtime for the employee or a group of employees.
– Inform the State Labour Inspectorate within one work day. If downtime has been announced by April 8, notification within three working days is sufficient.
– Turn to the Employment Services for a subsidy. The initial deadline is until the end of April, followed by the 15th of each subsequent month.
– The Employment Services then takes a decision within five work days.
– The subsidy is paid by the end of the current month. 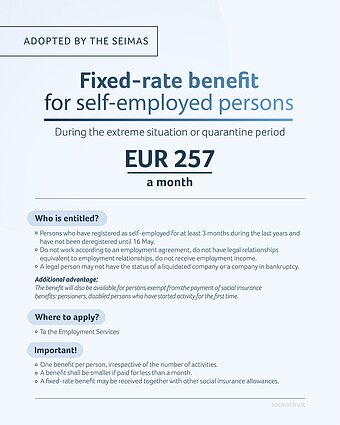 Self-employed people who have no other income can apply for a fixed monthly sum of 257 euros. The funds will not be counted towards insured income, and will not have any effect on any other benefits, including sickness, maternity, child, unemployment, or pension pay. 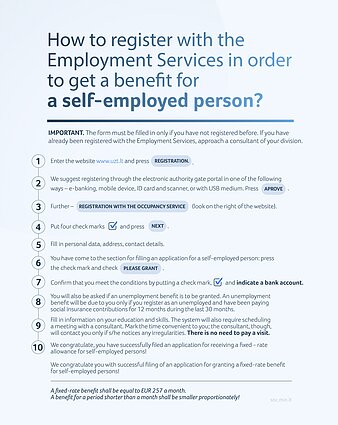 A self-employed person has to meet the following criteria:

– The person is not employed elsewhere, has no contractual employment agreements, and does not receive income from other employment.

– A legal entity may not have the status of a liquidated company or a company in bankruptcy.

– A self-employed definition includes owners of sole proprietorships, true partners of small partnerships, general partnerships and limited partnerships, persons engaged in individual activities (including on a business licence), farmers and their true partners whose farm is equal to 4 ESU or bigger, persons receiving income according to copyright agreements or income from sports and performing in artistic activities.

The allowance is also paid to people exempt from social insurance contributions – pensioners and people with disabilities who became self-employed for the first time.

If the quarantine and the state of emergency is lifted before the end of a calendar month, the monthly subsidy will be reduced proportionately. 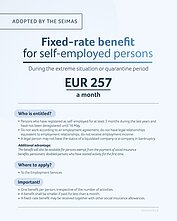 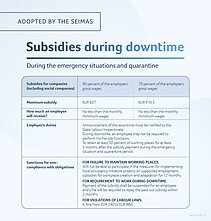 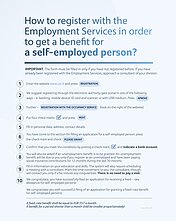