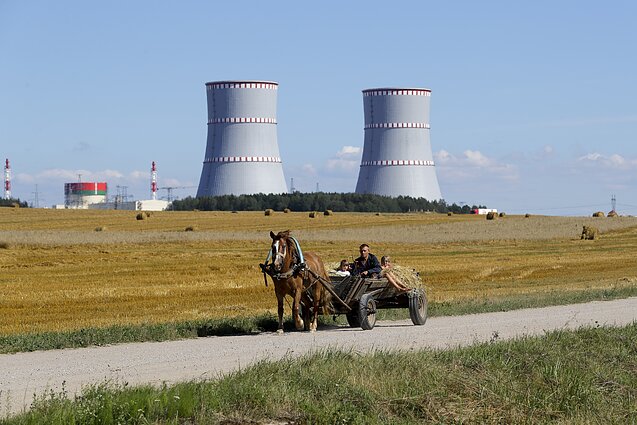 Belarus' nuclear plant – that very same one that Lithuania has been campaigning against – has seemingly suffered an incident days after beginning to produce electricity.

“The country will become a nuclear power,” lauded Alexander Lukashenko, just a day before the plant was taken offline. According to media reports, voltage-measuring transformers exploded outside the nuclear reactor.

A need to replace some equipment “arose”, the Belarusian Energy Ministry confirmed without elaborating. Vilnius has long complained about the lack of transparency over a string of other incidents during the construction phase of the plant.

Now, Lithuania has lodged calls with the European nuclear regulators to take action and has requested official information about the incident from Minsk.

But the nuclear behemoth, just 50 kilometres from Vilnius, has also driven a wedge between the Baltic states. Or, apparently, within Lithuania itself.

The country has yet to ratify a new deal that would see a pan-Baltic boycott of electricity produced at the Astravyets NPP and would also regulate energy trade with Russia.

The reasons for the delay – alleged infighting between ministries and Lithuania’s energy regulator claiming it has not been party to the decision taken at the highest political level. Here’s an explainer.

A quick fire round of coronavirus updates:
– Vaccines could reach Lithuania as early as January.
– You can now register for your Covid-19 test online.
– Don’t get your hopes up too fast, as the quarantine is likely to be extended.
– It seems Lithuanians jumped on the opportunity to visit bars and restaurants one last time.
– Hospitals across the country are sounding the alarm bells, saying the situation is becoming critical.

The two liberal and the conservative parties have now signed a coalition agreement. Although the posts have not been confirmed yet, the Liberal Movement is set to receive two ministries and the Freedom Party three.

The likely next prime minister, Ingrida Šimonytė from the conservatives, has attracted some international media coverage after claiming the country would support “those fighting for freedom” in Taiwan.

Meanwhile, the parties in Lithuania did promise to be more polite and change the country’s “political culture”. But can they really achieve their pledge to stop bickering?

Looking to the other side of the continent, Šimonytė said Lithuania hoped for less bitter relations between the European Union and the United States after Joe Biden was elected president.

The election in the US claimed a somewhat unexpected casualty in Estonia after a far-right minister resigned following his party’s claims that the election was “rigged”.

Lonely Planet, one of the leading travel publications, has named Vilnius as one of the top 10 cities for expats. Do you agree? We would love to hear your experiences in the Lithuanian capital. Drop us a line – English@lrt.lt.

The Church paedophilia scandal shaking Poland has also reverberated across the border in Lithuania. Henryk Gulbinowicz, a cardinal sanctioned by the Vatican, has streets dedicated to him in Lithuania and holds honorary titles. However, Vilnius District municipality said they would not judge and has so far dodged calls by other politicians to take action. Meanwhile, the country’s Culture Ministry said an award given to Gulbinowicz in 2013 would be revoked.

– On Poland's Independence Day, Lithuanian President Gitanas Nausėda thanked Warsaw for “the defence of democratic values, human rights and freedoms in our neighbourhood”. Although Nausėda spoke about “our neirghbourhood”, some commentators pointed out the problematic time of the greeting, as Poland is seeing mass protests against a ban on abortions.

– A local community in Liverpool came together to speak out against racism and xenophobia after a group of teenagers assaulted a seven-year-old boy from Lithuania.

– Due to “deteriorating” security in the Baltics, Sweden is set to dramatically raise its defence budget by 40 percent. In an interview with LRT.lt, the country’s Ambassador to Lithuania Inger Buxton talks defence, coronavirus, Belarus, and “feminist foreign policy”.

– What was it like to be a woman anti-Soviet partisan? Here are the stories of Lilly and Pine

– The EU took months to agree on sanctions against Belarus due to a single member state using its veto power. But if Brussels dropped this cornerstone principle, would small countries like Lithuania see their influence dwindle?

– The danger of drowning seems to have been as high in the 16th century as today, judging by the remains of a medieval soldier found in Lake Asveja.

– Britain has sentenced a teenager who advised a Lithuanian neo-Nazi terrorist on how to make a bomb. Luckily, it failed to explode during the attack on Western Union offices in Vilnius last year.

– Wondering what the inside of the Vilnius TV tower looks like? Read the story here.

– A conference on abortions hosted at the presidential palace has set off alarm bells among Lithuania’s human rights watchers.