LRT English Newsletter: ‘Sex on the Beach’ is back 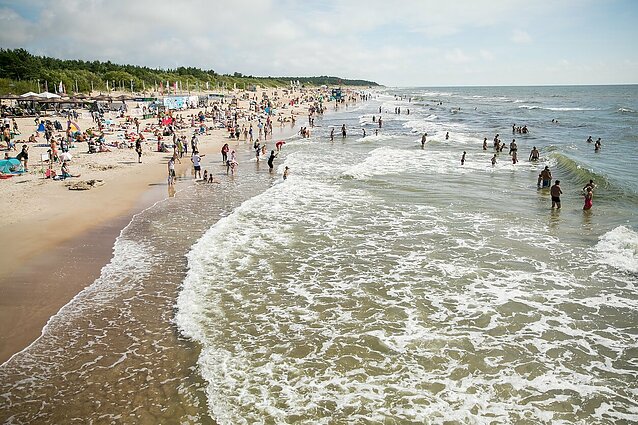 A beach in Lithuania / LRT

Holidaying is good for the economy. As the authorities would like Lithuanian holidaymakers to splash out this summer, the parliament voted to allow beach bars to sell light alcohol – in a reversal of the government’s tough line on drinking. Health minister and the country’s main campaigner against drinking disapproves, however, saying “there is no place” for alcohol on the beach.

Meanwhile another beach, in central Vilnius, incensed politicians so much that they passed legislation outlawing celebrations – offending “good morals”, in their own words – on Lukiškių Square. Instead of the open beach, it must sport a monument of the Vytis.

NATO has finally approved its long-promised plans for the defence of Poland and the Baltic states. While they were ready since at least last December, Turkey has been leveraging its approval on winning some concessions for its dealings with the Kurds. NATO and Ankara came to a “compromise”, though Lithuanian officials would not comment on what it is.

Vilnius is joyful, saying updated plans were in urgent need in the face of changing security situation in its part of Europe.

Also this week Lithuania signed a landmark agreement with Germany, regulating the temporary presence of troops on each other’s territory, and adopted new law to streamline its defence during wartime.

Lithuania is embracing the iconic – and truly delicious, in the opinion of LRT newsroom – pink cold soup šaltibarščiai as its calling card. A new tourism promotion campaign relies heavily on the soup’s pink-with-cucumber-bits iconography to entice tourists. A giant image of šaltibarščiai has also appeared on Vilnius Airport floor.

The potential tourists now include travelers from the UK – the country has now been crossed out from Lithuania’s ‘blacklist’ of coronavirus-affected countries and its residents can come without the mandatory two-week self-isolation.

Lithuania’s law enforcement made news last Friday by releasing details about a thwarted act of terrorism last October. A far-right radical, identifying with the neo-Nazi Feurkrieg Division group, allegedly planned to blow up Western Union offices in Vilnius with 2.5 kilos of explosives.

Last month, the chair of the Seimas’ National Security and Defence Committee assured that while Lithuania’s agencies were keeping track of some extremist activity, it did not pose any major risks to Lithuania’s national security.

Seven TV channels of Moscow’s international propaganda mouthpiece RT have been banned from Latvian airways. Riga urged fellow EU member states to follow suit and Lithuania’s media watchdog has indicated it will – as soon as it gets a nod from the Foreign Ministry.

Lithuania is following closely the presidential election in Poland where Warsaw Mayor Rafał Trzaskowski is challenging the monolith power of Andrzej Duda’s Law and Justice party. Which president would be more favourable to Lithuania? While Vilnius-Warsaw relations hit rock-bottom under Trzaskowski’s fellow Donald Tusk’s government, observers say it would be different now.

At least Poles who cast their ballots at the embassy in Vilnius seemed to prefer Duda’s opponent.

ELECTIONS OF OUR OWN

Lithuanians, too, are getting ready for an important vote this October. For the first time, expatriate voters will be electing their own representative and the parliament even legalised online voting, in case the ballot happens during a pandemic.

Meanwhile the participating parties are finalising their electoral lists and some have decided to allow more input from their rank-and-file members. The results have been quite unexpected in some cases, like with the main opposition party, the conservative Homeland Union, which is seriously aiming for the win this election.

– Lithuania finally has an economy minister, filling the post that has been vacant for over six months (which is, incidentally, longer than the remaining term for the current government). Curiously, Rimantas Sinkevičius is the third man with that family name to hold the position.

– The worst is over for Lithuania’s economy, the Finance Ministry said this week, presenting its economic forecasts for the coming years. The country’s GDP may contract 7 percent this year before bouncing 5.9 percent in 2021.

– Unions, employers and the government opened talks on raising the minimum wage next year. With the looming economic crisis, there might be a raise, but rather smaller than previously planned, according to the prime minister.

– Natural gas will not be included in the EU’s decarbonisation fund, the member states decided this week – a blow to Lithuania and some other eastern countries that sought the Just Transition Fund to finance LNG and nuclear projects.

One of Lithuania’s biggest restaurant chains, Grill London, is suspected to have dodged over a hundred thousand euros of taxes in a fictitious aid scheme with the Lithuanian Autosport Federation. The latter’s vice president and Grill London co-owner have been arrested as the investigation continues.

The Baltic and Nordic countries detected higher-than-usual radiation last week, suspecting it may have resulted from a malfunctioning nuclear power plant in western Russia. However, the Radiation Protection Centre reassured that “Lithuania is really completely safe” and that no elevated radiation was spotted here.

As Lithuania is pushing for the other Baltic states to join its boycott of Belarusian nuclear electricity, Estonian Deputy Secretary General for Energy Timo Tatar has slammed Vilnius for alleged incoherence, saying “it’s hard to keep up” with Lithuania’s changing position.

PROTEST TO END ALL PROTESTS

Wary of protesting, a Lithuanian comedian organised a “rally against all rallies in the world” last Friday.

The protest had no political agenda, the organisers claimed, simply complaining that “the public space in recent times has been taken up by many strange people with absolutely zero self-reflection, self-irony and a very limited sense of humour”.

– Should you be worried about tech-savvy pickpockets reading your contactless bank cards? LRT FACTS investigates.

– With Russian president himself dabbling in questionable historical writing, the EU’s disinformation fighting agency EUvsDisinfo fact-checked another article in Kremlin-controlled media about how the Baltic states had it well under the Soviet rule.

– Misty mornings and mystic forests get captured by a 17-year-old photographer who aims to show the beauty of Lithuania’s nature.