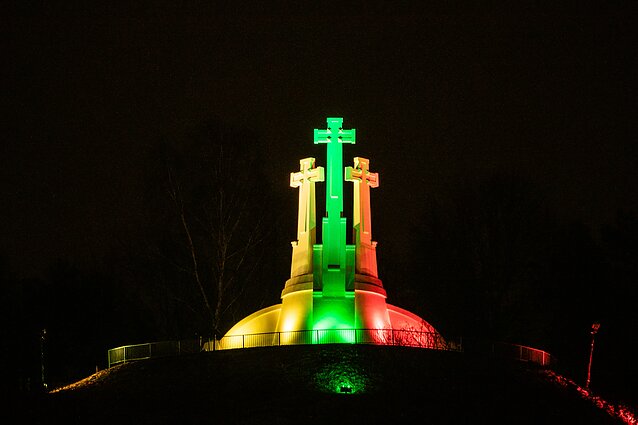 Some 27 countries joined the alliance, including Lithuania / E. Blaževič/LRT

Lithuania became one of 27 countries to join the International Religious Freedom Alliance spearheaded by the US President Donald Trump.

The Trump administration launched the IRF Alliance on the eve of the National Prayer Breakfast on Februrary 5, according to the Voice of America.

The State Department described as “the first time in history an international coalition has come together at a national leadership level to push the issue of religious freedom forward around the world.”

Plans to start the IRF Alliance was first mentioned by Secretary of State Mike Pompeo at a religious freedom ministerial in Washington last July and then announced by Trump at the UN General Assembly in September. 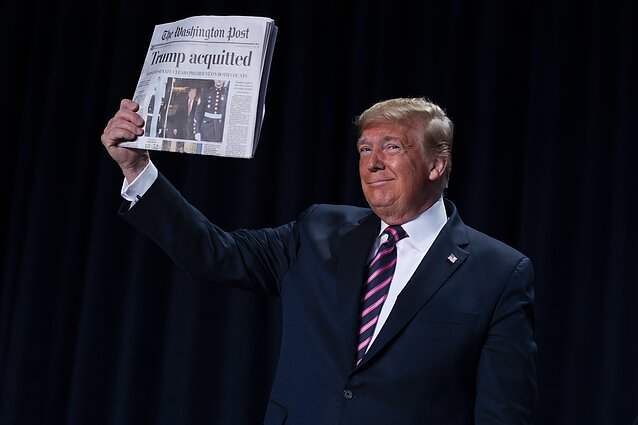 US President Donald Trump announced the IRF Allaince during the annual Nation Prayer Breakfast, where he also held up a newspaper with the headline "Trump acquitted" / AP

The alliance members will focus on combating blasphemy laws, the use of technology in religious oppression, and persecuting people who convert to another religion.

They are also considering the possibilities of using sanctions to punish the religious persecutors.

Religious and human rights groups are welcoming the move as focusing global attention on religious freedom.

“This initiative highlights the growing restrictions on individual freedom to practice the faith of one’s choosing, or to not have faith. The alliance can help show societies how to create systems and practices that allow people freedom of conscience,” David Curry told VOA.

Curry is the CEO of Open Doors USA, a prominent Christian persecution watchdog.

Jeff King, president of International Christian Concern, explained the IRF Alliance is the result of years of international consultations. 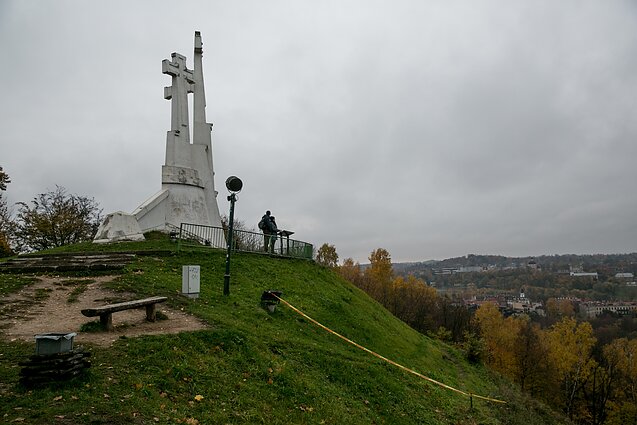 “There could be a misperception that this is the US pushing religious freedom down the throats of other countries, but this is not the case. This is an initiative from the International Religious Freedom Roundtable that existed for years,” King said.

He added that the alliance is an important tool with the potential to "move the needle" and will work best as part of a broader effort that involves "carrots and sticks."

However, there are concerns over the makeup of the IRF Alliance, which includes members that have questionable human rights records.

“Bulgaria and some others have reprehensible records on human rights and religious freedom,” King noted.

“The main obstacle to the US role in this alliance is simply that the administration of President Donald Trump has implemented the tragic travel ban that has effected majority Muslim countries, in addition to new countries such as Myanmar," said Philippe Nassif, Middle East and North Africa advocacy director for Amnesty International.

"So, how can the US be taken seriously when Rohyinga Muslims from Myanmar, or Sudanese Christians, or other persecuted groups are unable to enter the U.S. due to this ban?” 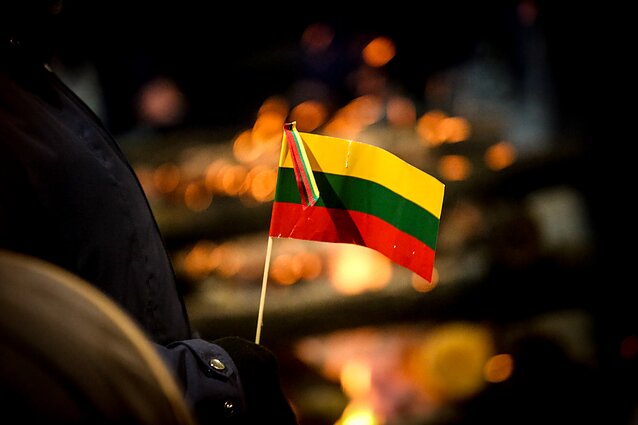 Lithuania took into account "the strategic partnership with the US" when joining the initiative / BNS nuotr.

Lithuania: strategic partnership with the US

Lithuania joined the initiative in order "to take part in protecting religious minorities," but also by taking into account “the strategic partnership with the US,” the Lithuanian foreign ministry told LRT English in a written comment.

The cooperation among member countries is based on “ministerial level meetings several times a year, as well as during UN and other multinational formats,” the ministry said.

The alliance will aim to support victims, sanction those in breach of religious freedom, and also cooperate with religious groups, educate law enforcement officials, increase society’s resilience against discirmination based on religion or beliefs,” the ministry added.

The network will also “encourage connections with, and inbetween, civil society or other non-governmental organisations, religious groups and/or religion and belief followers,” according to the Lithuanian foreign ministry.

The story originally appeared on VOA News. LRT English added comments by the Lithuanian foreign ministry, as well as the lead paragraph. 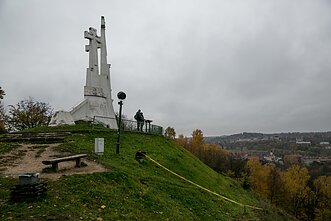 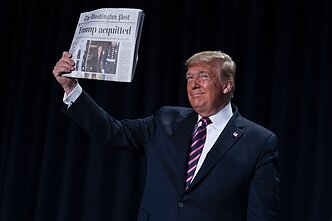 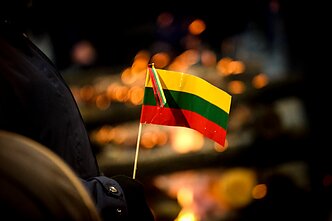 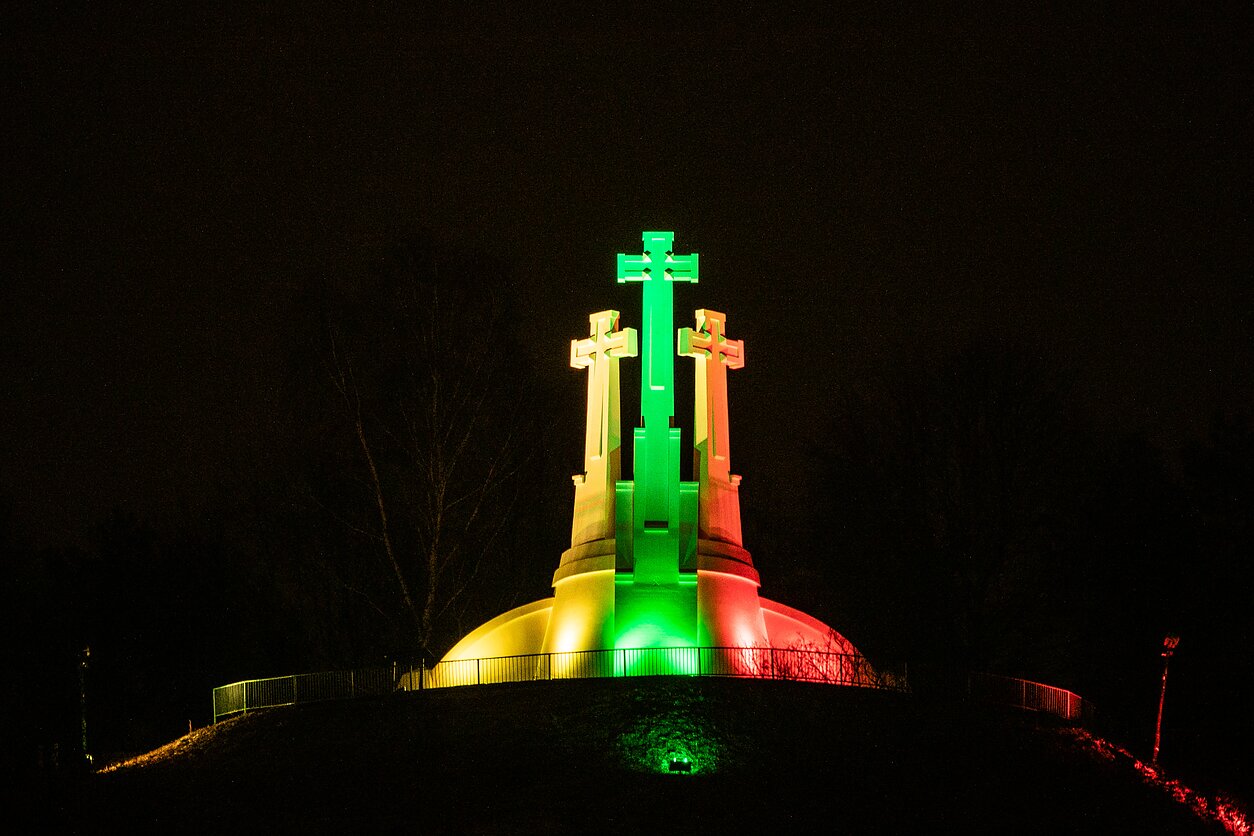 Some 27 countries joined the alliance, including Lithuania
1 / 4E. Blaževič/LRT 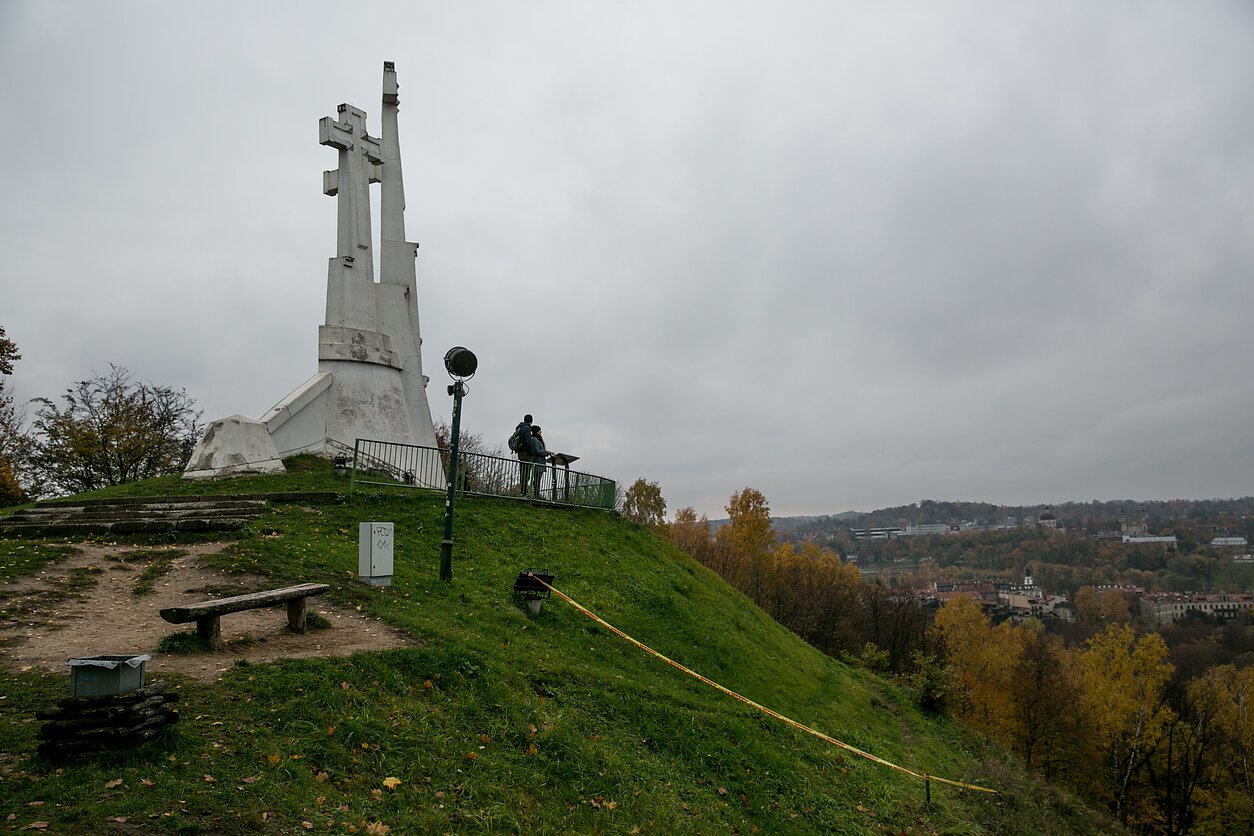 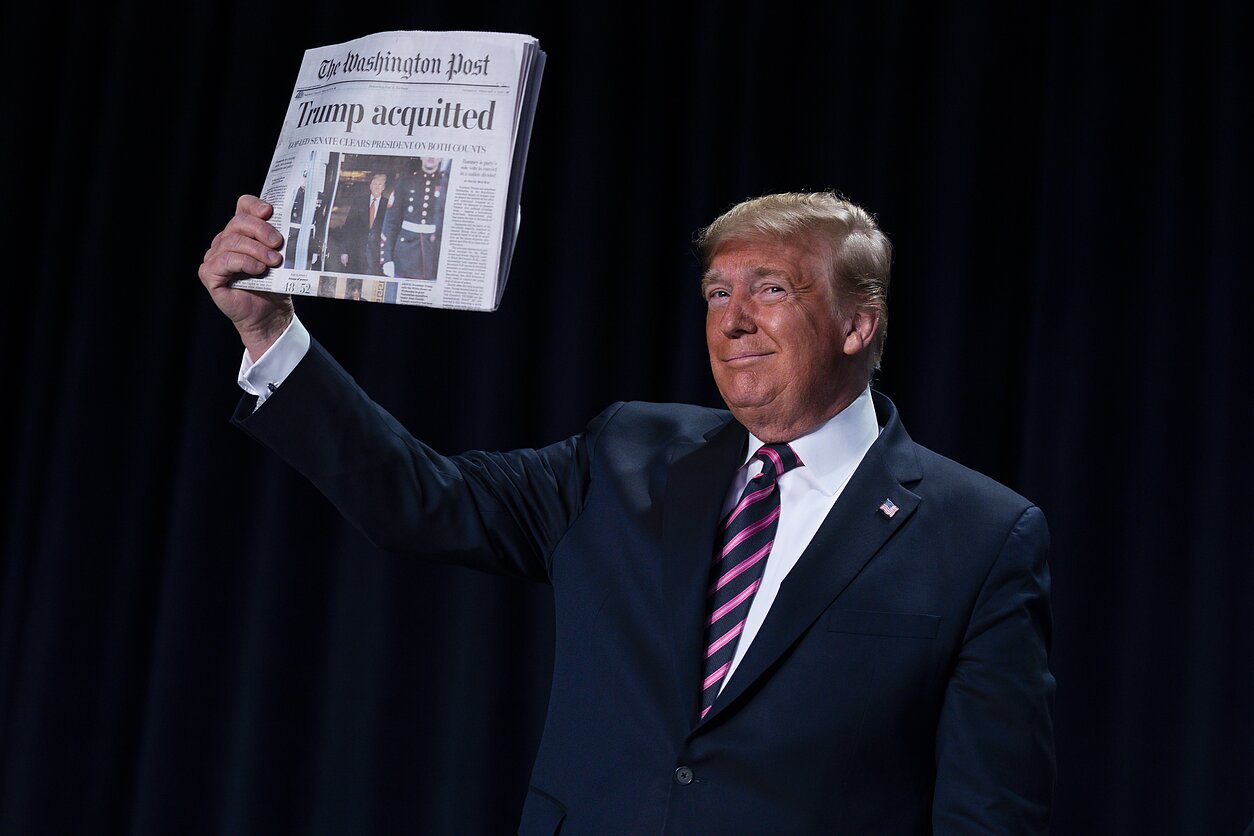 US President Donald Trump announced the IRF Allaince during the annual Nation Prayer Breakfast, where he also held up a newspaper with the headline "Trump acquitted"
3 / 4AP 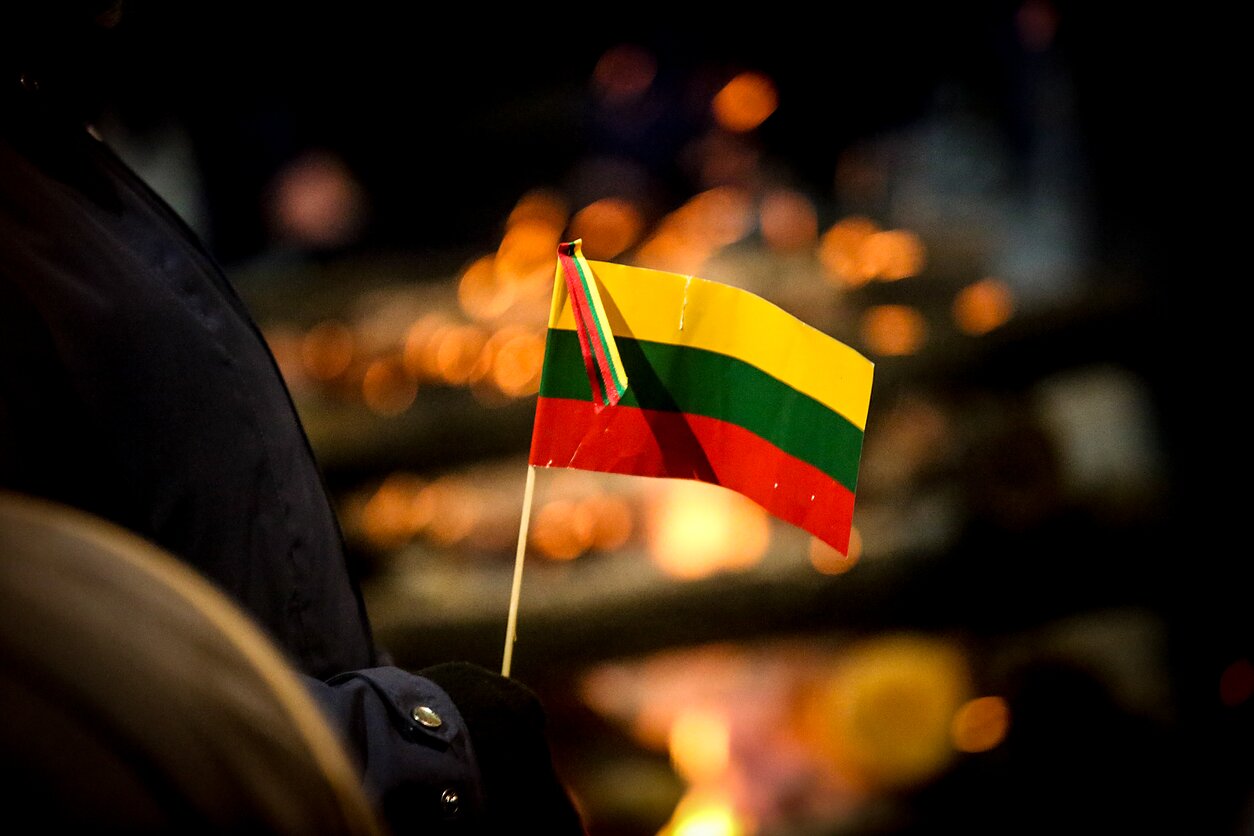 Lithuania took into account "the strategic partnership with the US" when joining the initiative
4 / 4BNS nuotr.