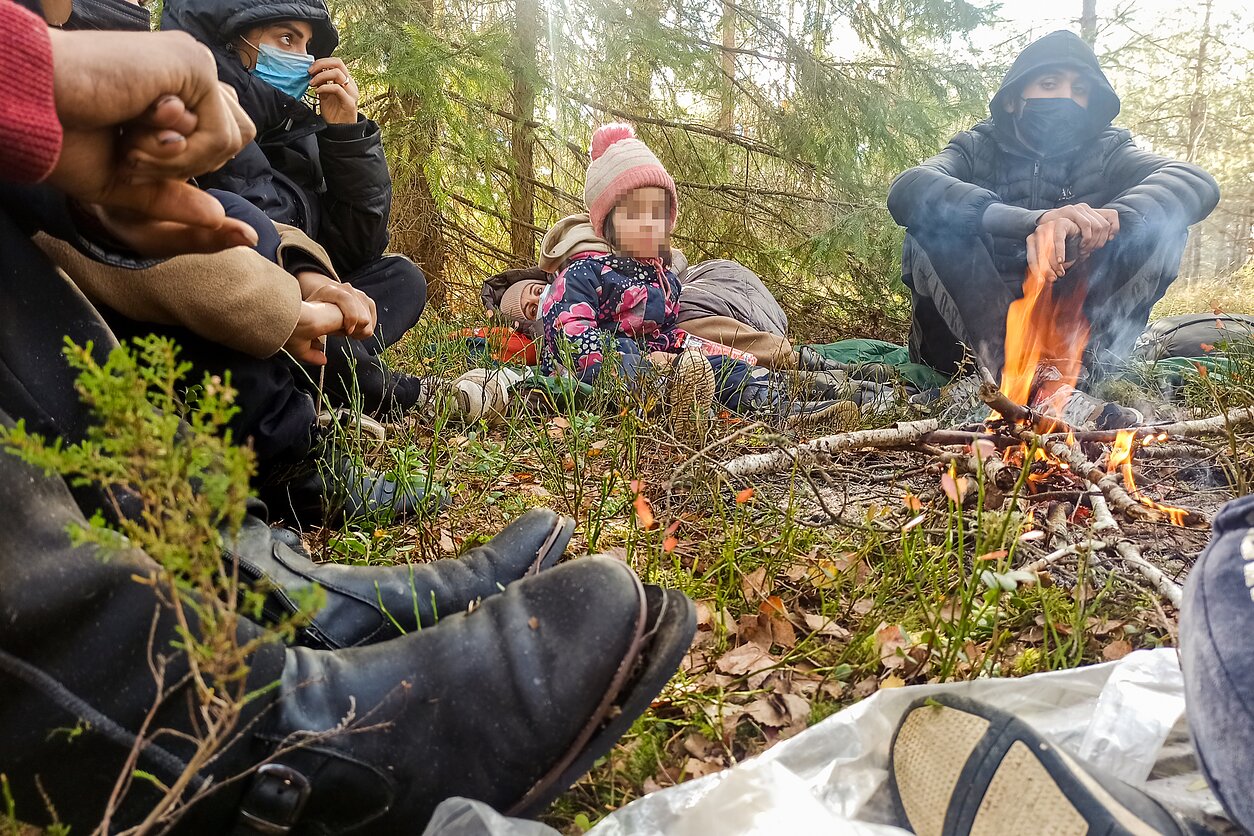 Migrant group near the Lithuanian border. They say they had to sleep by the fire / Jurga Bakaitė/LRT

On Monday, LRT reporters saw a group of 13 migrants on the Lithuanian-Belarusian border. What followed was the first reporting on Lithuania's pushback policy.

A group of people sitting around a campfire are teaching each other how to pronounce, in English, a request for asylum. The group consists of two families, including a woman who claims to be pregnant, a few teenagers, and a four-year-old girl.

All migrants say they are sick, we hear them coughing. The soles of one man’s shoes are almost falling off. They ask for water.

The people say they come from Afghanistan, that they have already spent two nights in Lithuania. The border guards will later say that they have had Russian residence permits for some time. 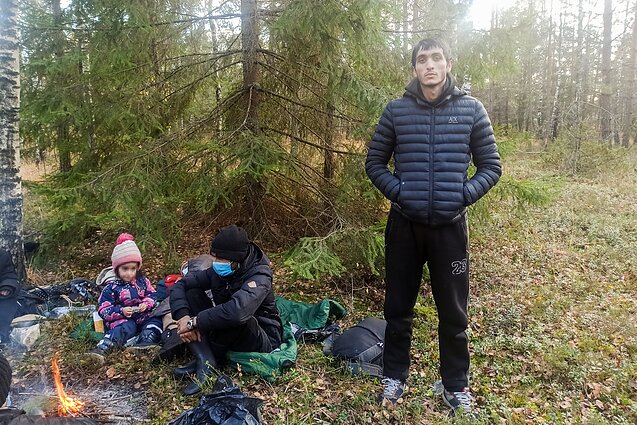 19-year-old Ahmar. He speaks with journalists, interprets for other migrants. / Jurga Bakaitė/LRT

“I am smart,” says Ahmar when we ask how the Afghans know about Lithuania and why they want to stay here.

Ahmar is 19 years old and speaks good English. He acts as a leader of the group. Ahmar says he was a second-year economics student in Kabul.

According to him, the family is escaping the Taliban, which has already burned down the family's house in Takhar Province and attacked several of their relatives who worked in the police.

If they had known about the conditions at the Lithuanian-Belarusian border, they would have never travelled here, Ahmar adds. He says they have already spent ten days without shelter, sleeping huddled around a campfire. 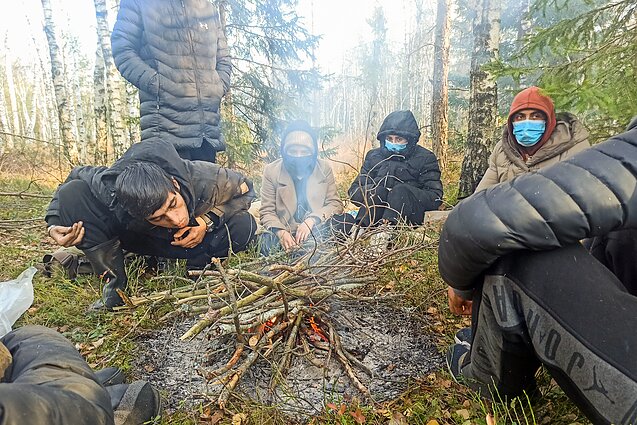 Migrant group near the Lithuanian border. They say they had to sleep by the fire / Jurga Bakaitė/LRT

“We are all sick. You see how cold the weather is. We feel very bad, no one wants to live like this. […] I didn’t think it would be so hard,” Ahmar says.

We ask them how much food they have. They show us a black plastic bag with Russian writing, containing some pretzels and bread. They say they got this food from other Afghans they met on the way. 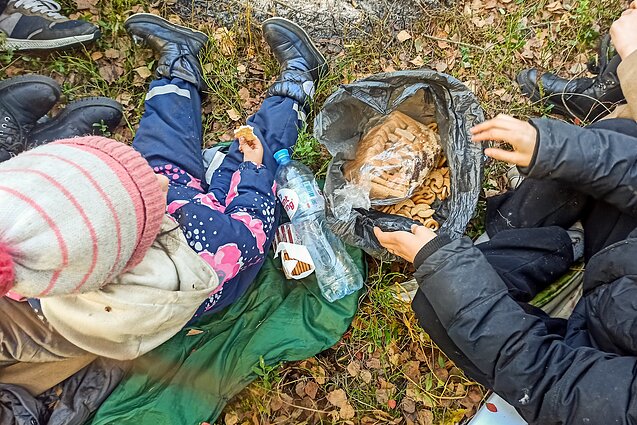 The migrant group show their meager food supplies. They are in particular need of water / Jurga Bakaitė/LRT

Border guards arrive. They inquire about the kids’ age and ask if they need help. The border guards state that migrants need no urgent assistance and proceed to take their documents – a few laminated papers, one of which says “marriage certificate”.

The guards instruct the supposedly pregnant woman to stand up. At first sight, she does not look pregnant, but her examination ends here.

The authorities later told LRT.lt that the woman’s pregnancy test came back negative, and she was pushed back into the Belarusian territory. 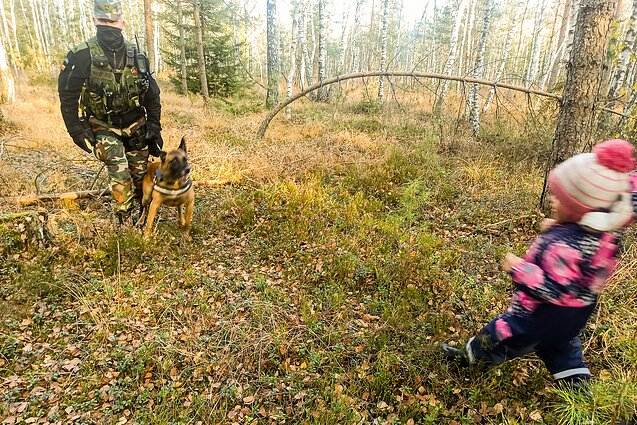 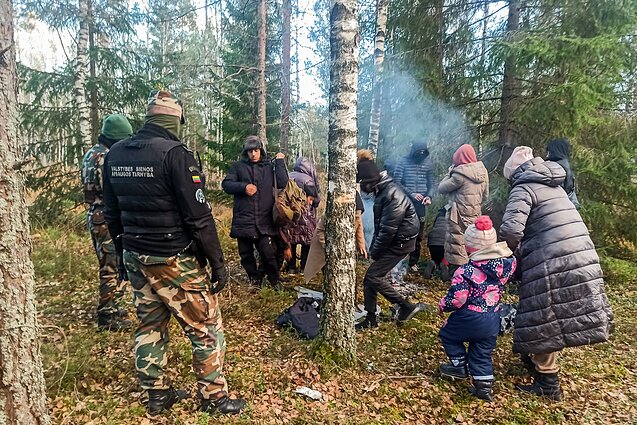 The migrants take their things, each has about a bagful of belongings / Jurga Bakaitė/LRT

Belarusian border guards arrive at the scene. When the Lithuanian guards tell the migrants to stand up and follow them, a man on the Belarusian side of the border gets out of a dark green UAZ car and prepares to film what's happening.

Videos captured and edited by Belarusian border guards are often the main source of information from the border. Lithuania calls it propaganda. 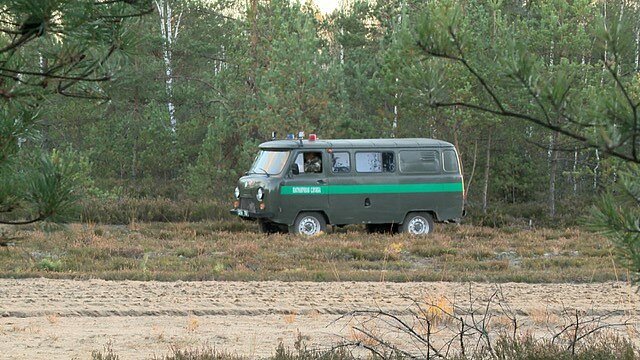 The Belarusian officer notices journalists and their cameras. He goes back.

But the Lithuanian border guards are not happy with the journalists’ presence either. When we reach a border trail, the guards ask us to leave. We follow the operation from a distance, thinking that the pushbacks will now take place.

The guards are taking migrants to their vans. One Afghan woman, the mother of the youngest girl, falls on the ground and says she cannot walk any further. 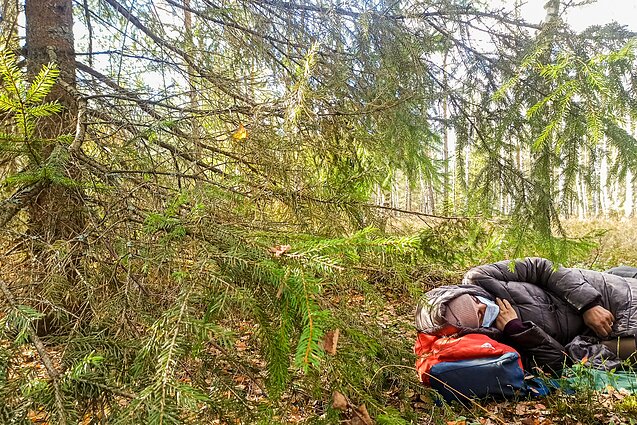 The guards are discussing what to do. They prepare to call an ambulance for the woman but are not sure what to do with the rest of the group.

“Does this mean we will not be accepted?” the migrants, who are again sitting on the ground, ask us. Nobody knows what is going to happen next.

We reach an SUV and an unmarked bus that belong to the State Border Guard Service (VSAT). This usually means that migrants will be taken further along the border and pushed back into Belarus.

According to the VSAT, they detain migrants, but only release them in a different location to mislead Belarusian officers on the other side. This is done to avoid repeating the same scenes as in Poland. There, groups of people would be stuck in a no-man's land as officers on either side block their passage to Poland, but also back to Belarus.

Temperature drops below zero. The border guards are trying to decide whether to set up a campfire or let the migrants warm up inside the vehicles. They decide on the latter option.

Migrants get into the car. Finally, the border guards inform everyone that they are leaving to meet the ambulance. 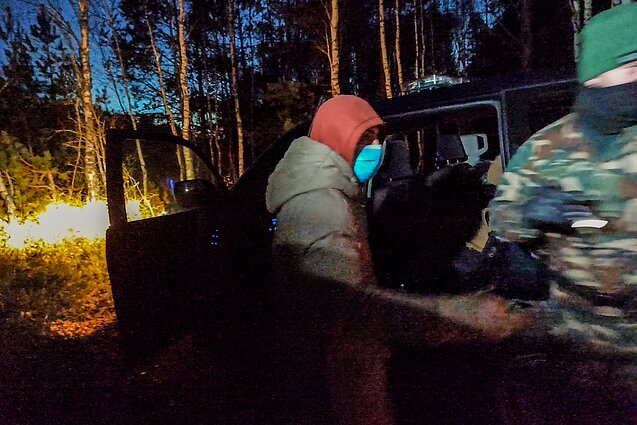 Samin climbs into a car to get warm. He and his wife Mursal would soon be pushed back into Belarus. The rest of the group claim to be Mursal's relatives. / Jurga Bakaitė/LRT

In the VSAT cars, the migrants are getting warm. But Polish activists, working with irregular migrants, stress that this is dangerous, as people who warm up too quickly become very weak.

The border guards take the migrants to see medics. Journalists are not allowed to travel along.

This is the last conversation we had with the Afghan families.

“Did [the border guards] explain what is going to happen to you?”
“No.”
“Are you afraid?”
“No, we are just tired.”
“What will happen if you’re pushed back to Belarus?”
“I don’t know. We might die there.”
“Have you asked for asylum?”
“No, they did not ask us about it.”

The next morning, the VSAT announces that 11 out of the 13 people have spent the night with the border guards. On Friday, the group will apply for asylum in Lithuania. 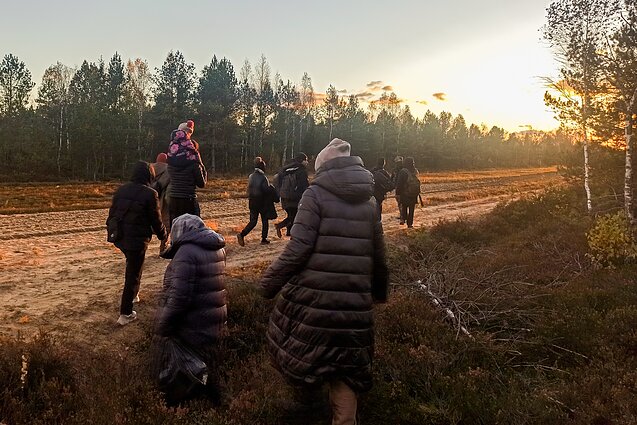 Border guards are escorting the migrants to their cars. Reporters were asked not to follow. / Jurga Bakaitė/LRT

We receive a text message. “Help us,” it says. A man, who claims to be the pregnant woman’s husband, says they were separated from the rest of the group and pushed back to Belarus. They share their GPS coordinates that confirm they are in the neighbouring country.

The Afghan woman pretended to be pregnant and was returned to Belarus, the border guards tell us.

For some time, we follow the couple’s location that shows they are approaching the Raigardas border checkpoint. Then their coordinates disappear – the phone has likely run out of battery. We don't hear from them again.

The Lithuanian pushback policy allows migrants to ask for asylum at border checkpoints. But since early August, when the procedure was adopted, not a single migrant has applied for asylum in such a way. At the border, they are asked to provide documents that they often do not have. 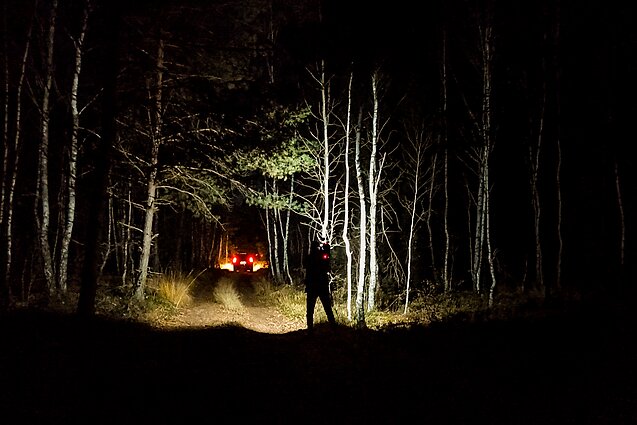 According to her, when NGOs find out about people freezing or starving at the border, they can only inform the migrants about the Belarusian Red Cross or direct them to the nearest border checkpoint.

“But often the distance to the closest checkpoint is 50 to 60 kilometres,” Jurevičiūtė said. People are often unable to cover such a distance on foot. 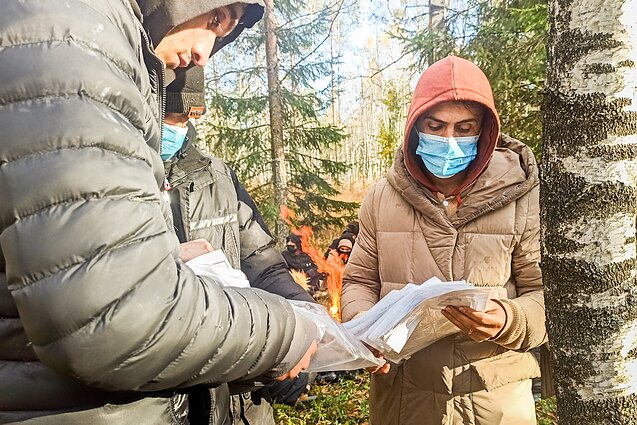 Samim and his wife were returned to Belarus. For a while, we followed their coordinates near the Raigardas Checkpoint, but the sygnal eventually disappeared / Jurga Bakaitė/LRT

Border guards only superficially assess the vulnerability of migrants who have crossed into Lithuania. The quick procedure does not allow to establish a person’s disability or examine any possible signs of torture.

“The current law on the Foreigners’ Legal Status considers only single parents to be vulnerable individuals, whereas families are not. So it could be that parents with children are sometimes turned away,” Jurevičiūtė says.

“It is important to mention that we do not have any information about people who are turned away. For example, we do not know if there are minors among them,” she adds.

According to Jurevičiūtė, it is not surprising that migrants we met at the border did not immediately ask for asylum. 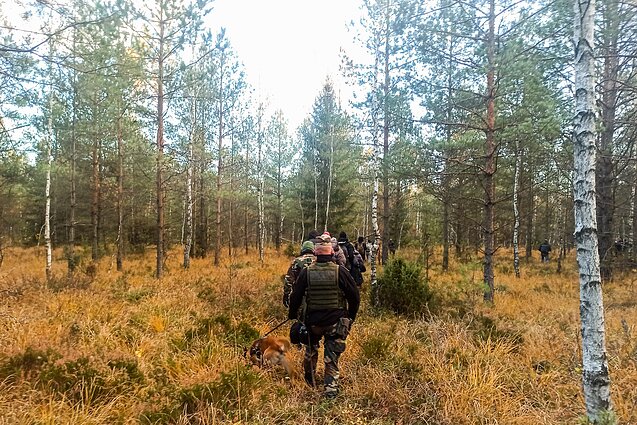 “Foreigners may not understand all the procedures or know that one has to ask for asylum immediately. This is especially the case if a person is exhausted after a long trip or has health problems,” Jurevičiūtė says.

“If there are signs that a person may wish to apply for asylum later, one must be informed about this right and corresponding procedures in a language one understands,” she adds.

Later, the VSAT informed us that the migrant group we met had tried to cross the Polish border before and had been pushed back. Then, the Belarusian border guards took them to the Lithuanian border. Such scenarios are becoming more and more common, according to Lithuanian Interior Minister Agnė Bilotaitė.

The Lithuanian border guards did everything right in assessing the situation regarding the group of the Afghan migrants, says Griedrius Mišutis, the VSAT’s spokesman.

“Doctors examined them all. Nobody’s life was in danger,” he tells LRT.lt.

When asked about the couple that was turned away, he says the border guards often meet migrants who pretend to be sick, injured, or lie about their age, impersonating minors.

“They do not have any documents, so we always assess their claims and make a decision,” according to Mišutis. 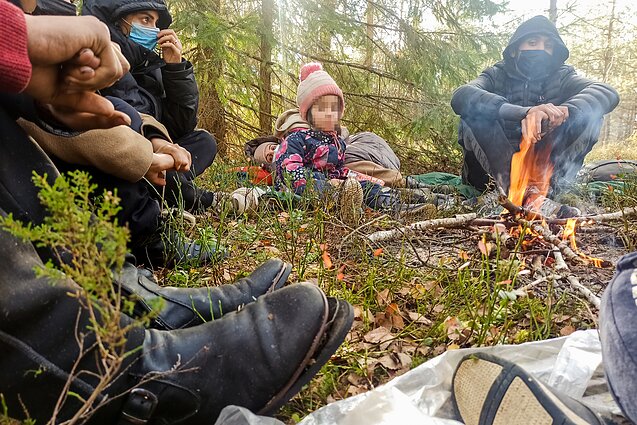 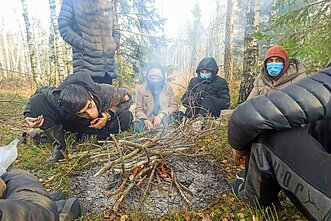 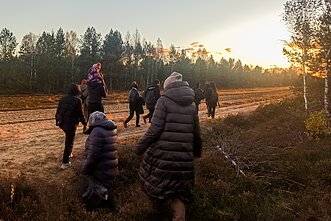 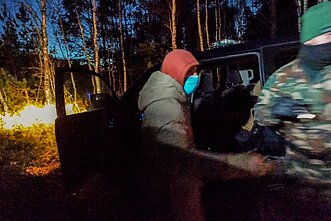 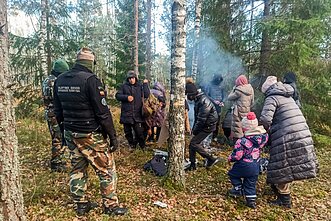 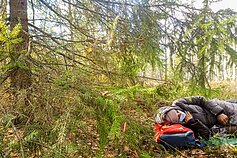 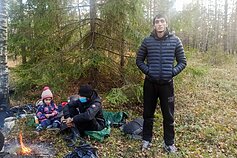 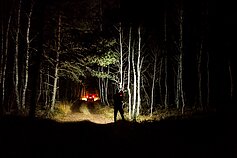