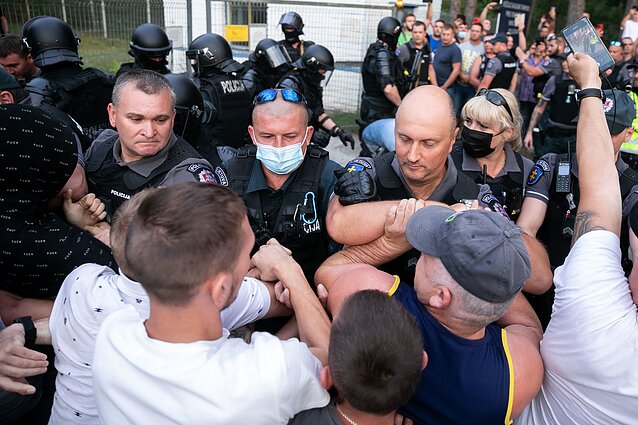 A group of anti-migrant activists blocked access to the Rūdninkai military training ground on Monday evening, where the authorities are planning to set up a tent camp for asylum seekers.

Ričardas Pocius, the commander of the Public Security Service, told BNS on Monday evening that a bridge over the River Merkys in southeastern Lithuania was being blocked.

“Trucks with tents and other equipment aren't allowed through,” Pocius said.

When the police, who had been watching the protest, asked protesters to clear the road, some of them refused to do so. A group of around ten officers then pushed them off the road amid cries of “shame” and “people are being beaten”.

Shortly afterwards, protesters formed a human chain in front of the gates of the training area, but it was broken by the riot police that arrived a few minutes later, according to a BNS reporter at the scene.

According to police spokesman Ramūnas Matonis, officers kept guard on the road over the night and will remain there on Tuesday.

“The situation was hot yesterday – the road to the facility was blocked, such things should not happen and the police will react vigorously,” Matonis told LRT RADIO on Tuesday morning. “It depends on the situation, if there are incidents, the police will be ready to respond, but if there are none, there won't be much force on the ground.”

According to reports, eight people were sanctioned by the police for refusing to move from the road to the Rūdninkai training ground. In another incident before midnight, officers of the Public Security Service, which controls the training facility, used tear gas against the protesters.

All the protesters had left by 01:00, according to Matonis. 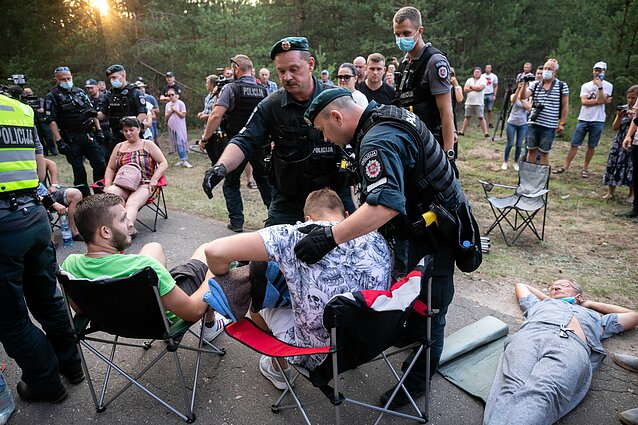 Some people said they were from the Family Defence March group that has recently organised protests against the ratification of the so-called Istanbul convention and gender-neutral partnership law.

Earlier on Monday, Interior Minister Agnė Bilotaitė said around 1,500 irregular migrants would be accommodated in a tent camp in the Rūdninkai training area in the district of Šalčininkai.

“A decision has been made and tents are being taken to the Rūdninkai training ground, which is an area under the control of the Public Security Service,” she told reporters. “It won’t be difficult to ensure security.” 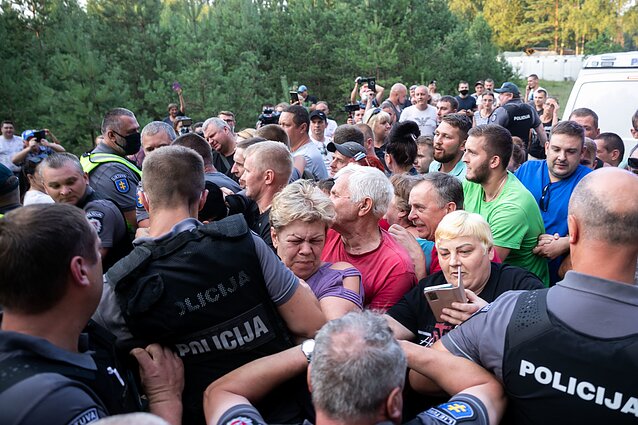 Last week, local residents in Dieveniškės protested against plans to house several hundred migrants in the town of some 600 people, saying they were concerned about the safety of children attending a nearby school. The ministry then proposed to open the camp in Rūdninkai, some 30 kilometres south of Vilnius.

Protesters in Rūdninkai also said that they were worried about their safety and that they did not understand why Lithuania should accept irregular arrivals.

Lina Laurinaitytė-Grigienė, spokeswoman to Interior Minister Agnė Bilotaitė, said that attempts to disrupt the construction of a tent camp in the Rūdninkai training area could be linked to “anti-state activity”, dismissing safety fears as unfounded. 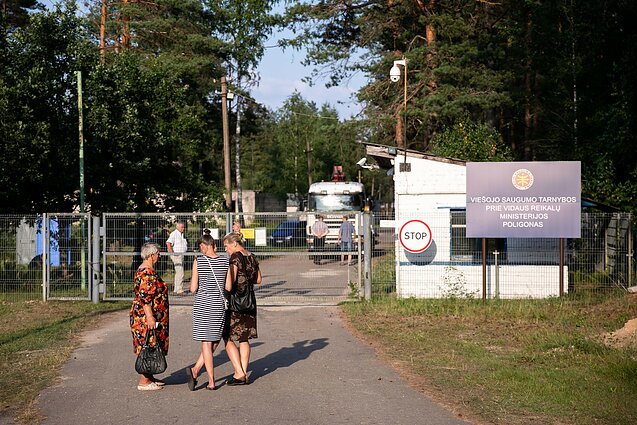 “These tents are being set up at the Public Security Service's training ground. This is a special purpose facility; the nearest settlement is 3.5 kilometers away,” she told BNS.

In an interview with the Delfi.lt news website, Valdemar Tomaševski, the leader of the Electoral Action of Poles in Lithuania – Christian Families Alliance, the party drawing its support from the region where the protests took place, distanced himself from the Rūdninkai rally which he called a provocation.

Lithuania has been facing an unprecedented influx of irregular migrants in recent months. This year so far, over 2,700 people have been detained after crossing into the country from Belarus.

Vilnius says the migration influx is an organised campaign by the Belarusian regime against Lithuania.

‘Not a peaceful protest’

“It was not a peaceful protest, as they are trying to say, people who took part in this protest forced themselves into the training area, attacked officers, set tires on fire. Obviously, it was a criminal activity in a militarised zone, and such an action is unacceptable,” the minister told reporters. 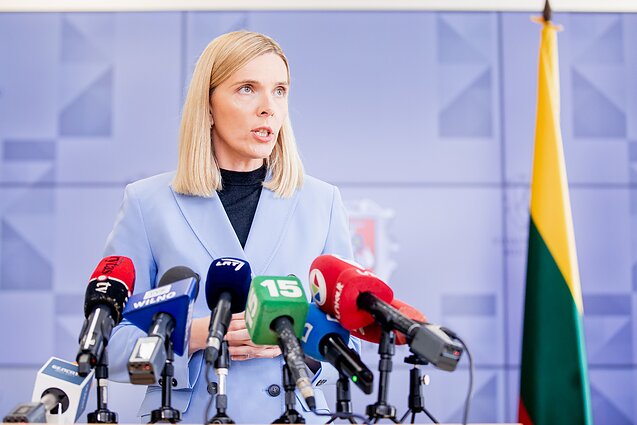 “Therefore, I have asked both the Police Department and the Prosecutor General's Office to launch a pre-trial investigation to look into this whole situation and bring people to justice,” she said.

Bilotaitė called the action on Monday night “a provocation and anti-state activity”, adding that she asked the country's State Security Department to look into it.

“This action was well-organised. As you know, the majority of the people who took part in the protest were not local residents, they were not members of the community, they were outsiders. It was a well-planned, well-organised anti-state move,” the minister said.

According to Bilotaitė, the number of irregular migrants in Lithuania is expected to reach 3,000 soon, most of them are housed at frontier posts.

“What happened at the Rūdnininkai training area is clearly a malicious provocation. The question is what those people were defending? The Rūdnininkai training area is used by the Public Security Service, it's a militarised special-purpose area with protection measures in place [...] and this territory is far from residential areas,” Bilotaitė said.

Also attending the press conference, Ričardas Pocius, commander of the Public Security Service, said it was “a serious incident” as person entered a military territory on Monday, set fire to tires, lightly injured two officers and blocked entry to the area.

Teargas had to be used to bring the protesters under control.

“We had a serious incident yesterday night when people entered our military territory, set tires on fire. There were two goals. Either to set the camp that is being installed for refugees on fire, or to distract our security forces and make them focus on the future fire. Our service came under attack and two officers were injured. Our special forces were called in and they unblocked the road, put out the fire inside in cooperation with the Fire and Rescue Service, and took everything under control,” Pocius said. 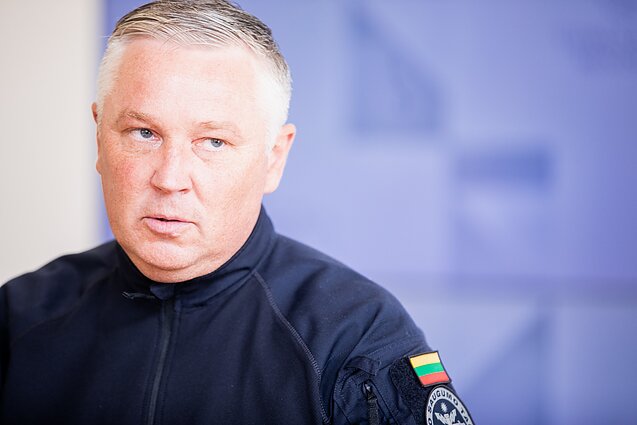 A number of people were detained after the scuffle and handed over to the police. Pocius could not say exactly how many people forced themselves into the training area.

“Obviously, preparations were made for that as you cannot easily set truck tires on fire with a lighter. [...] These people entered not through the entry-exit point but from the other side of the fence, through a weak spot. Security reacted and a physical contact followed, the intruders resisted legitimate demands and teargas was used,” he said.

Arūnas Paulauskas, a deputy police commissioner general, said eight people were detained during the protest after police backup was called in after 17:00 on Monday in response to a crowd of “fairly aggressive” people, and force was used to push them away. 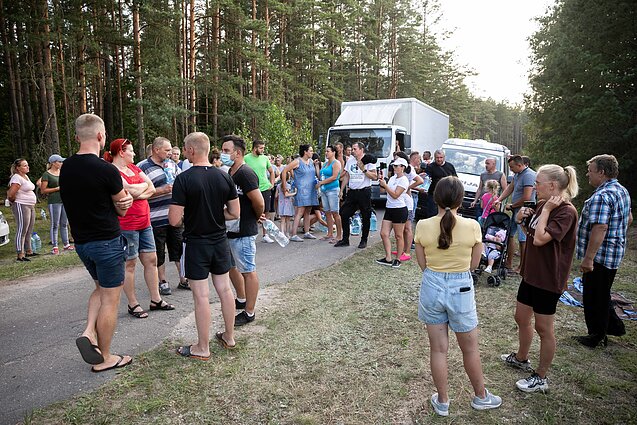 According to Paulauskas, some of the people were not local and came “from as far as Samogitia [western Lithuania]”.

“I do believe officers used force and special measures adequate to the situation and danger in this case,” Paulauskas said, adding that the incident looked like a well-planned action rather than a protest by the local community.

According to Paulauskas, Šalčininkai District Municipality had received requests to organise two rallies of up to 15 people, but around 150 people gathered in Rūdnininkai, “a gross violation of the association law”.

Police are fully prepared to respond to similar non-sanctioned gatherings, he said.

According to Paulauskas, the police have also received 13 complaints from the protesters over alleged injuries. 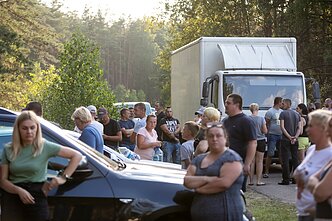 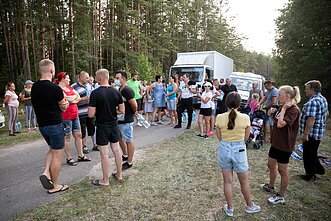 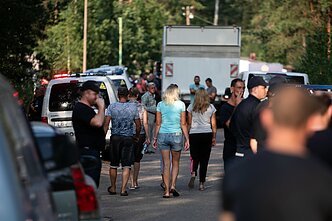 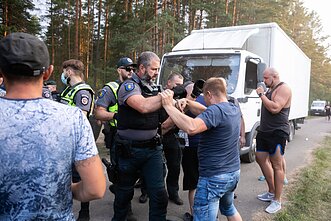 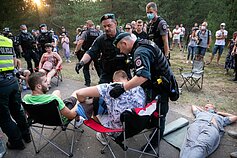 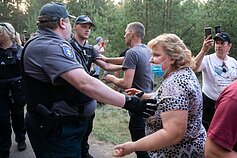 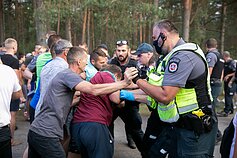 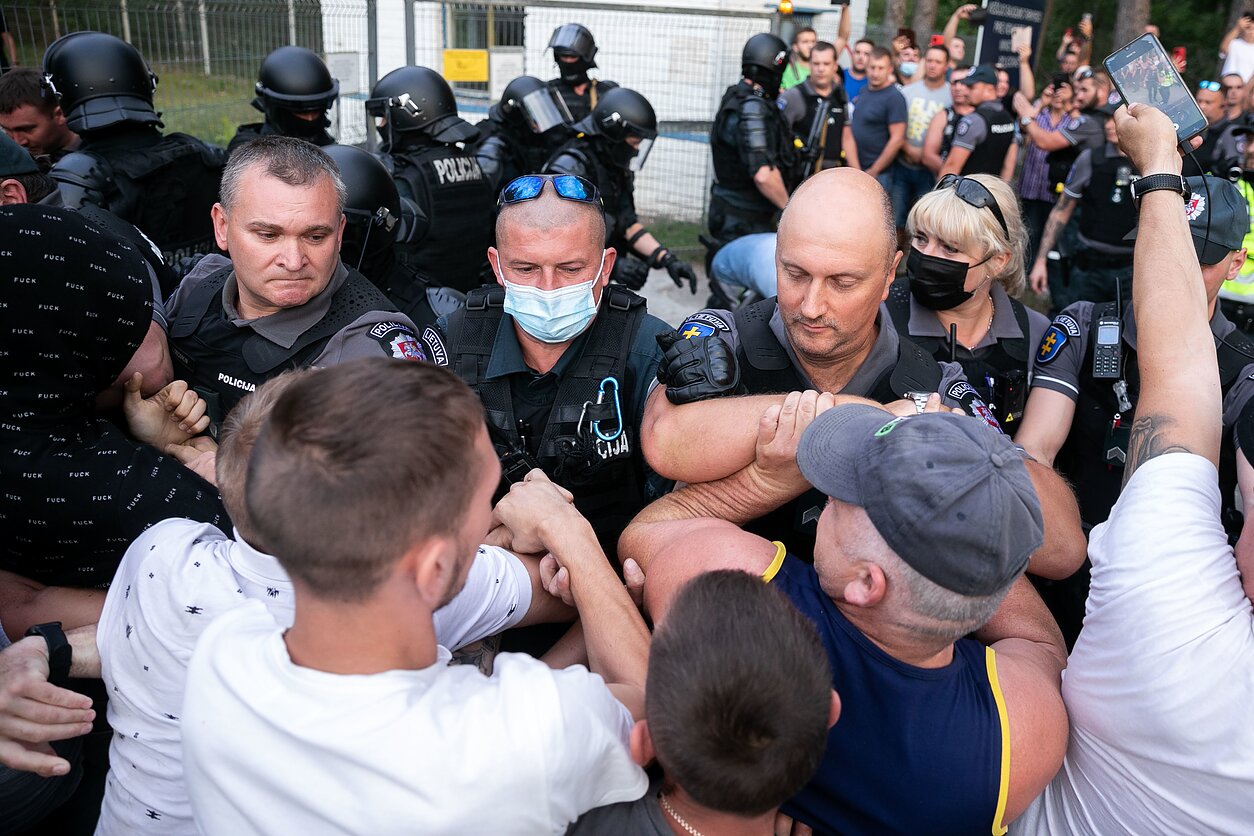 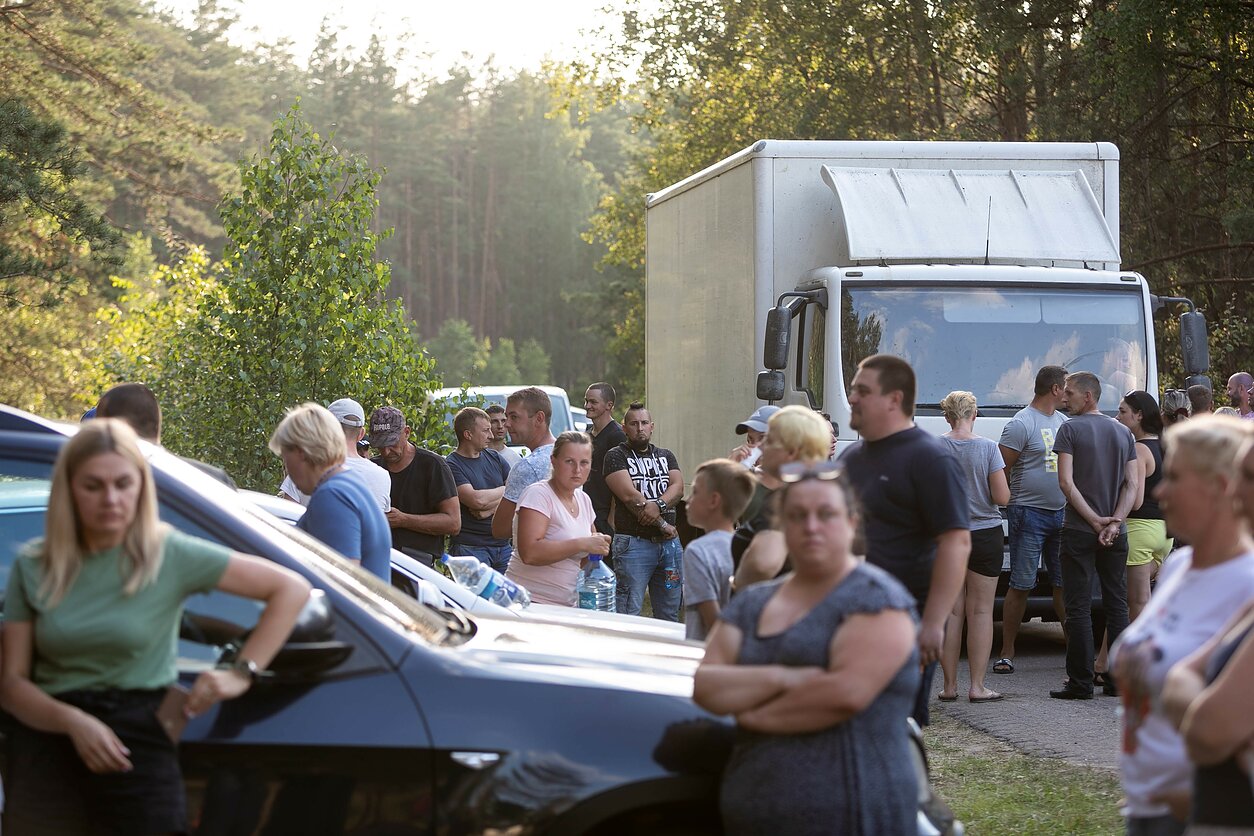 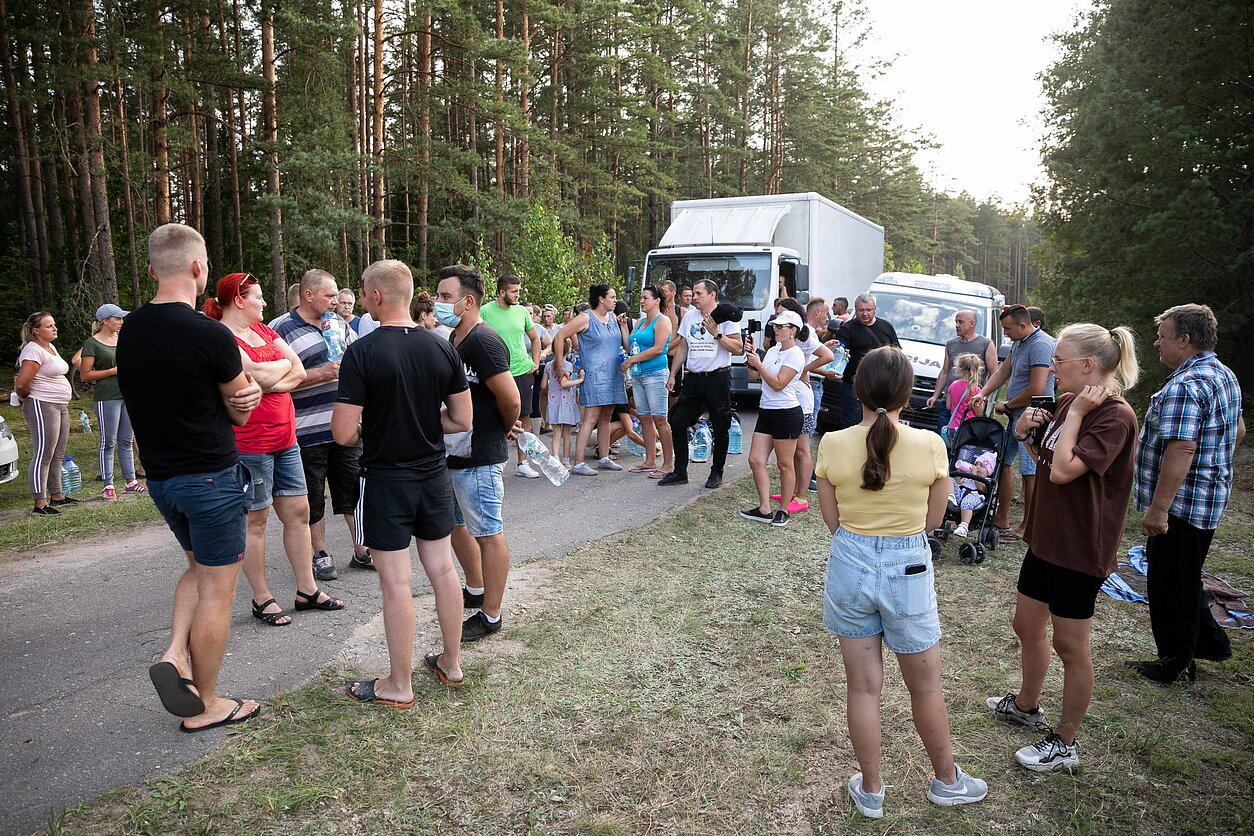 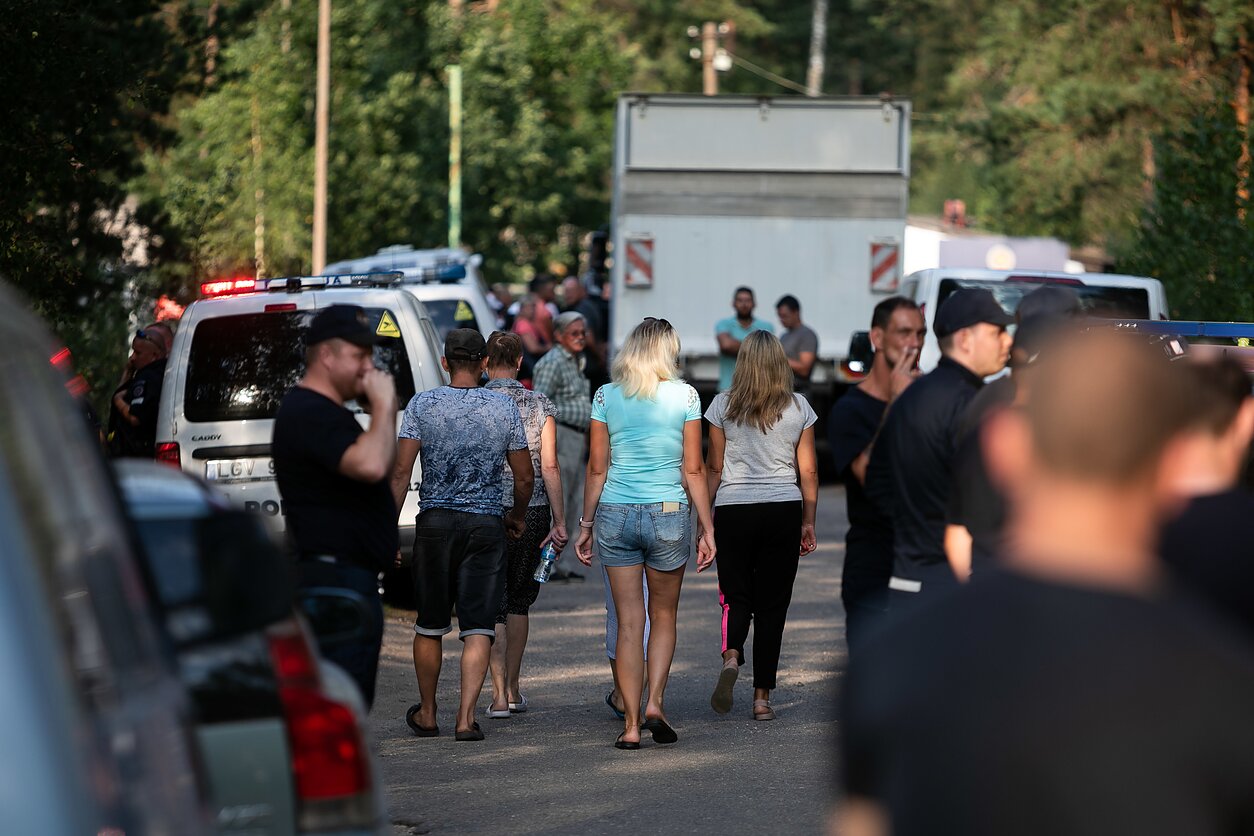 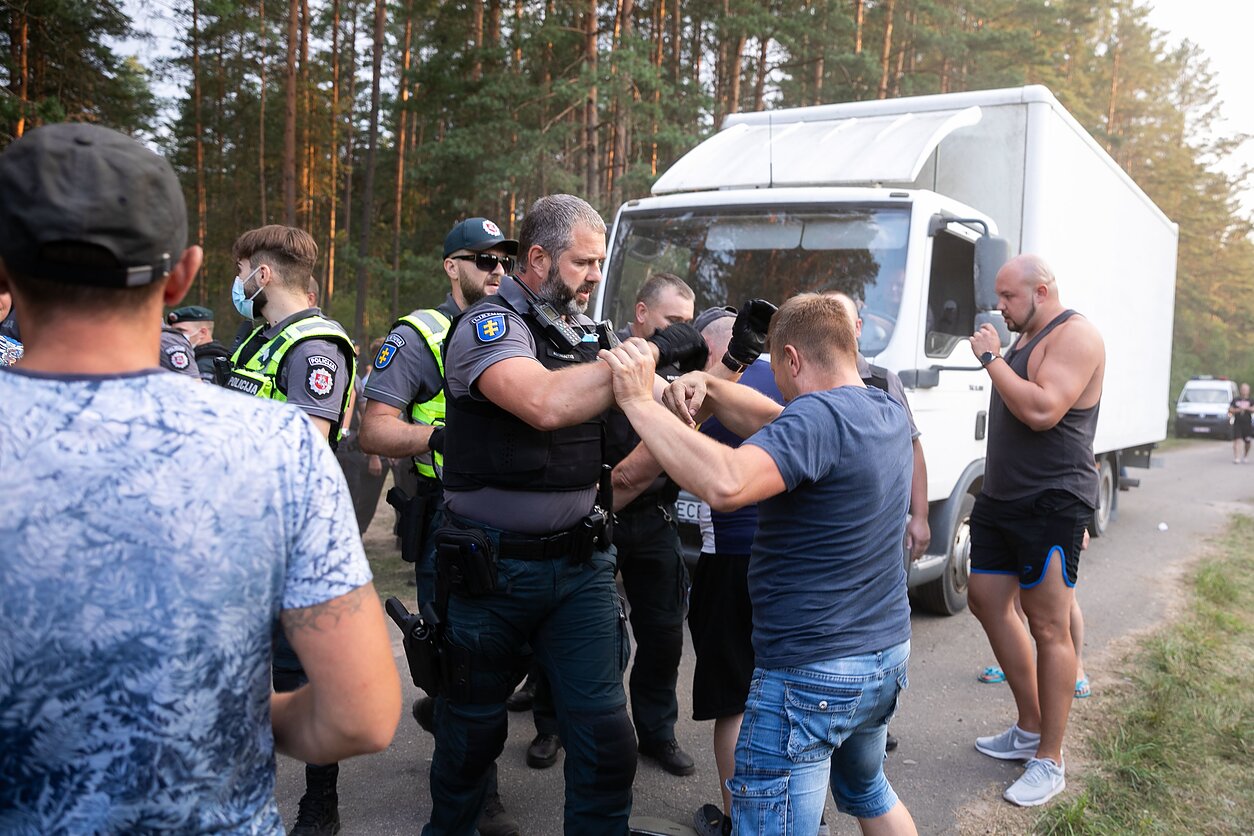 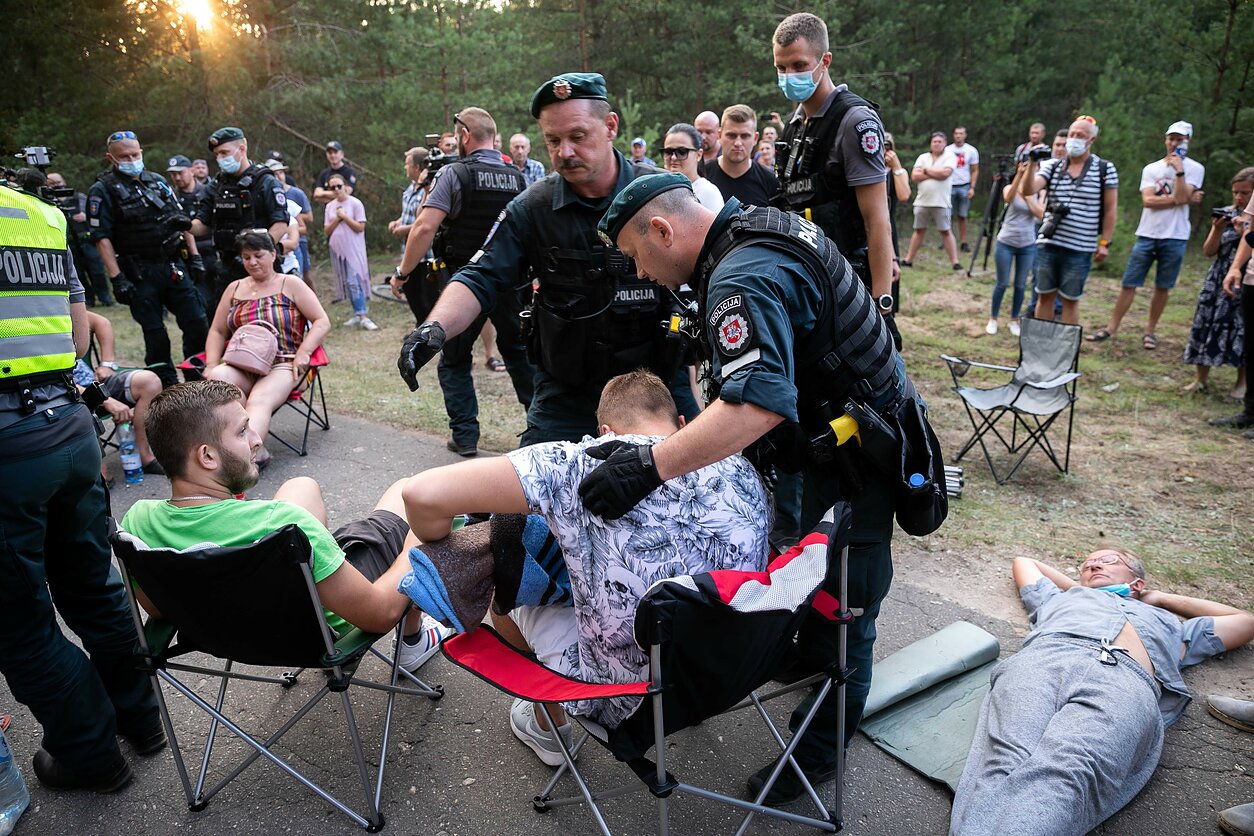 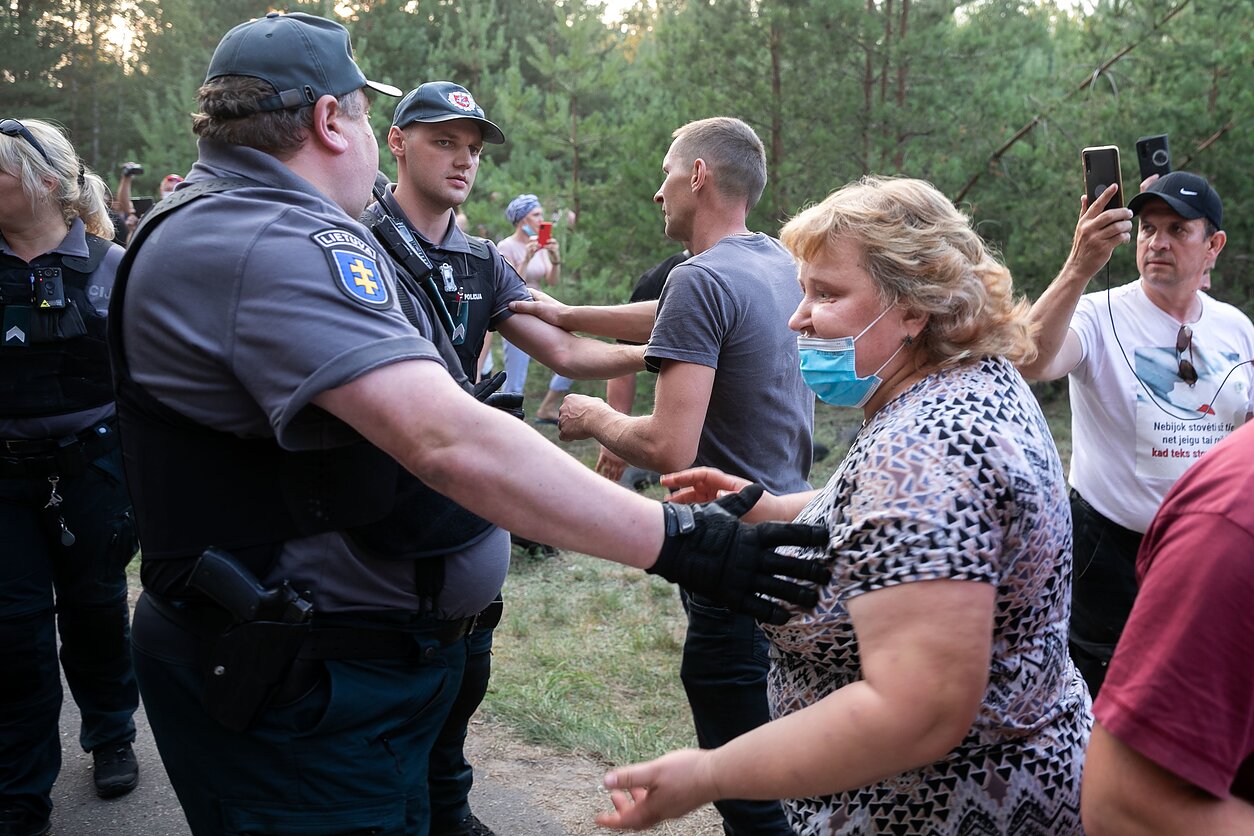 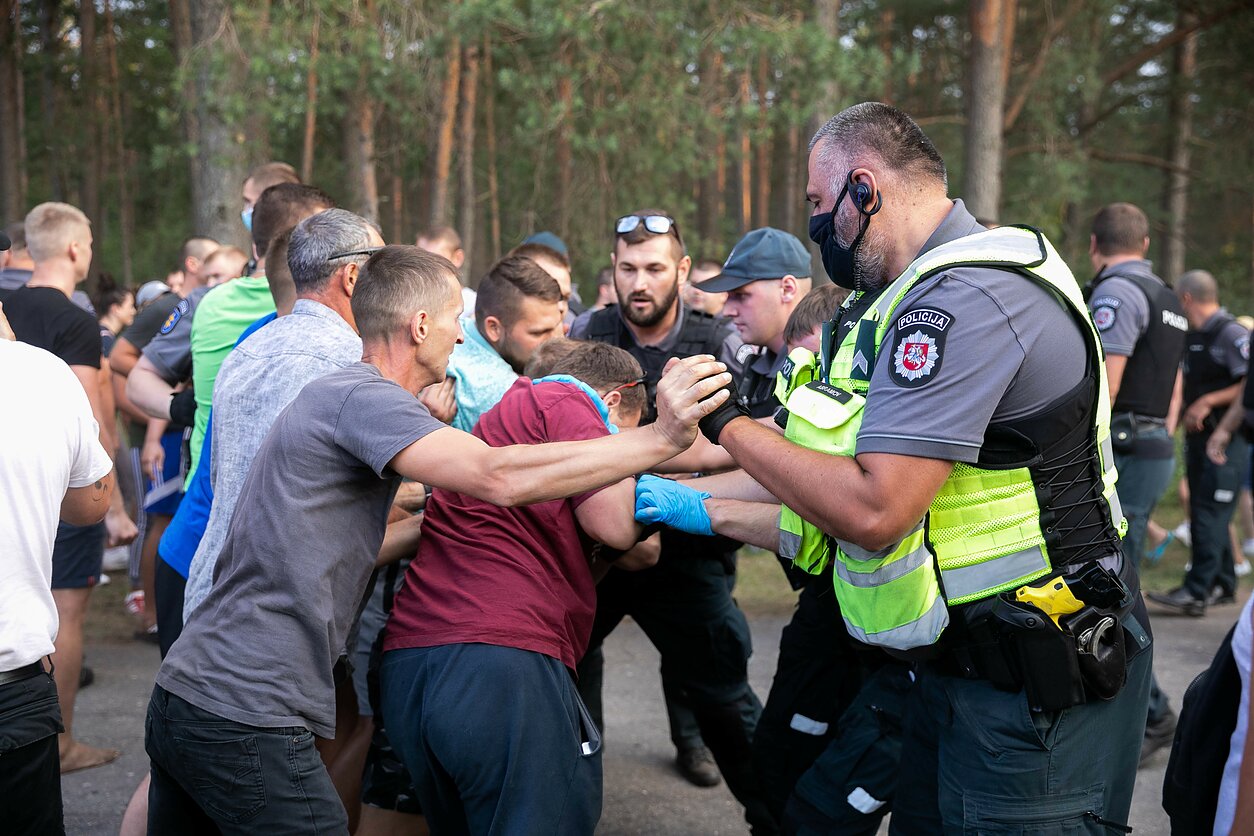 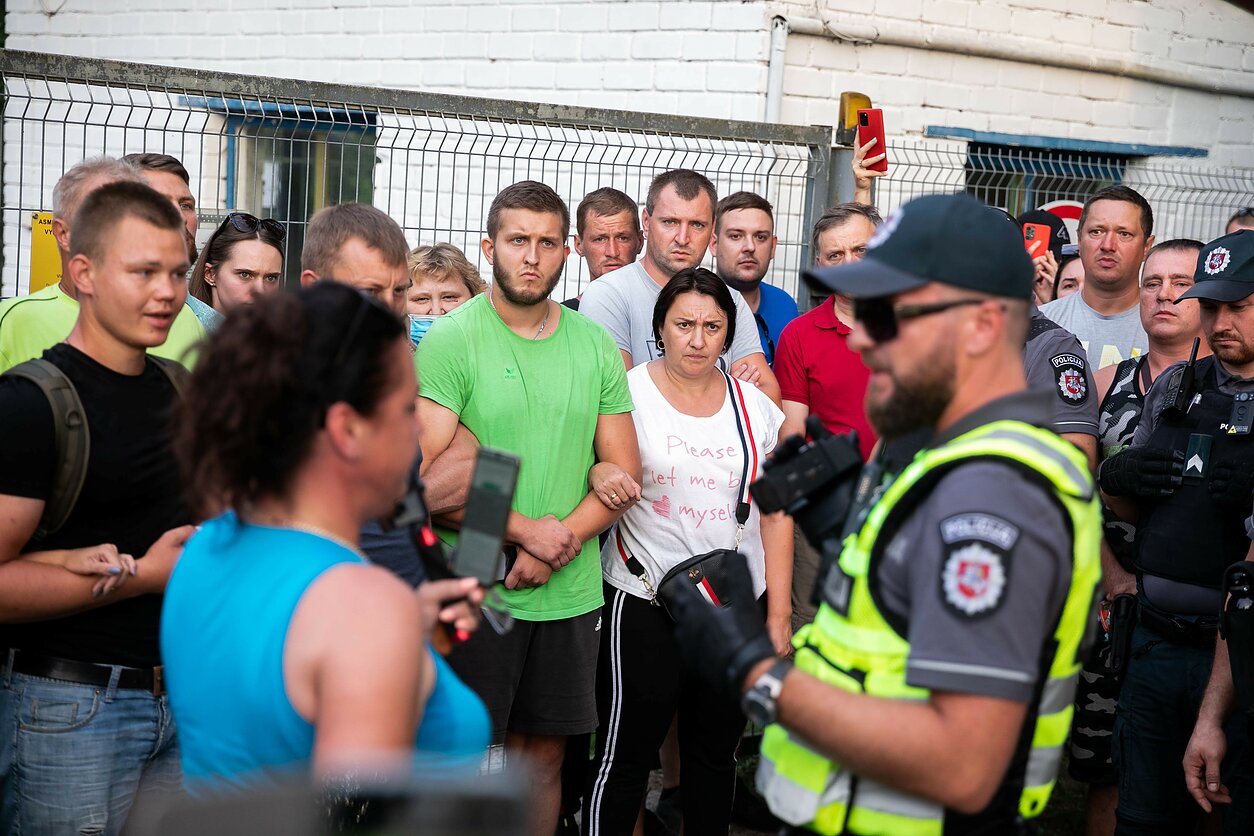 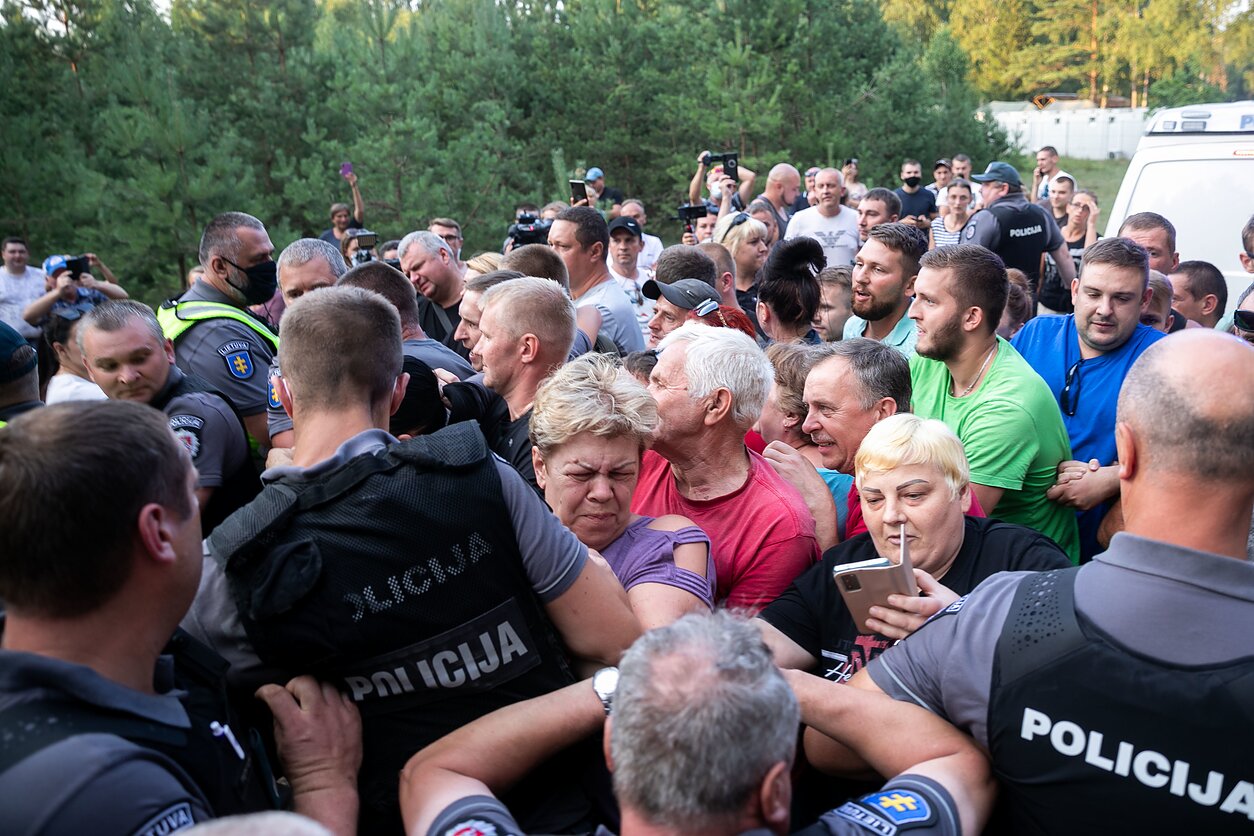 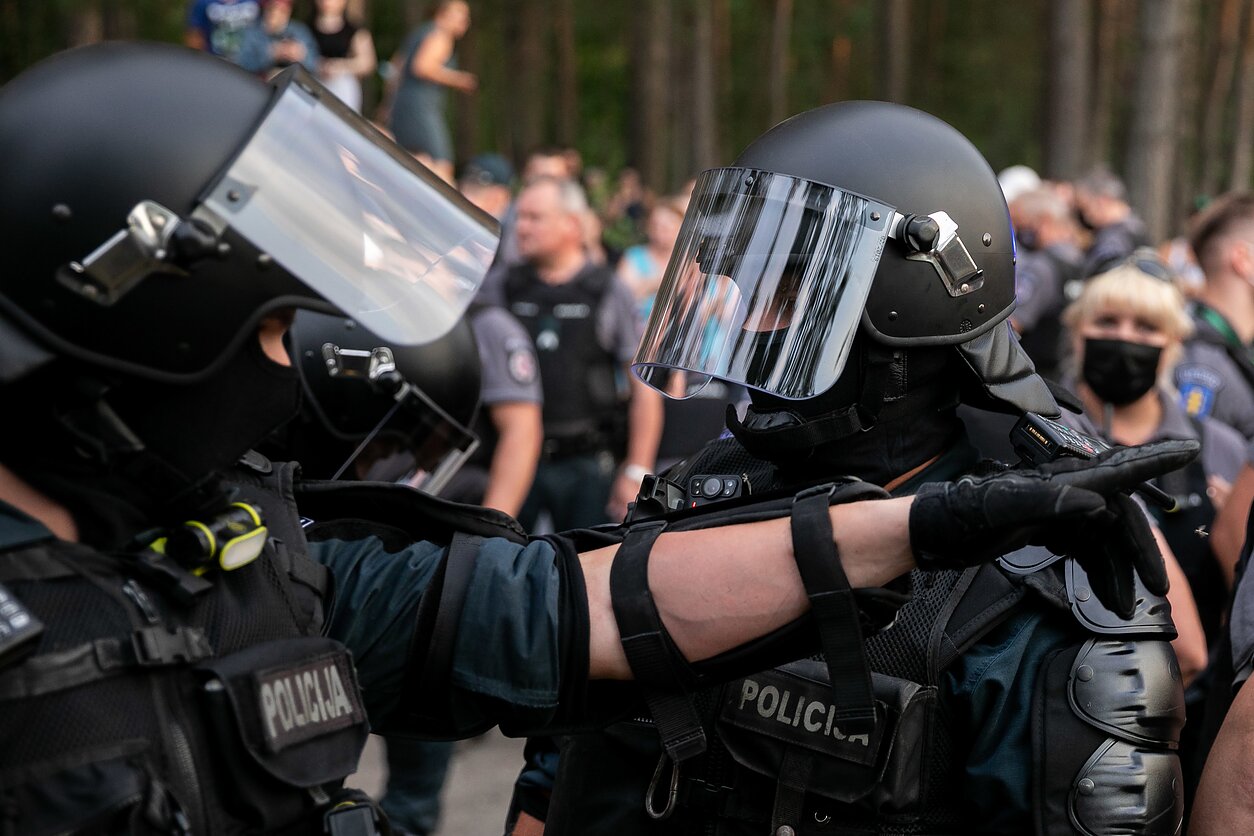 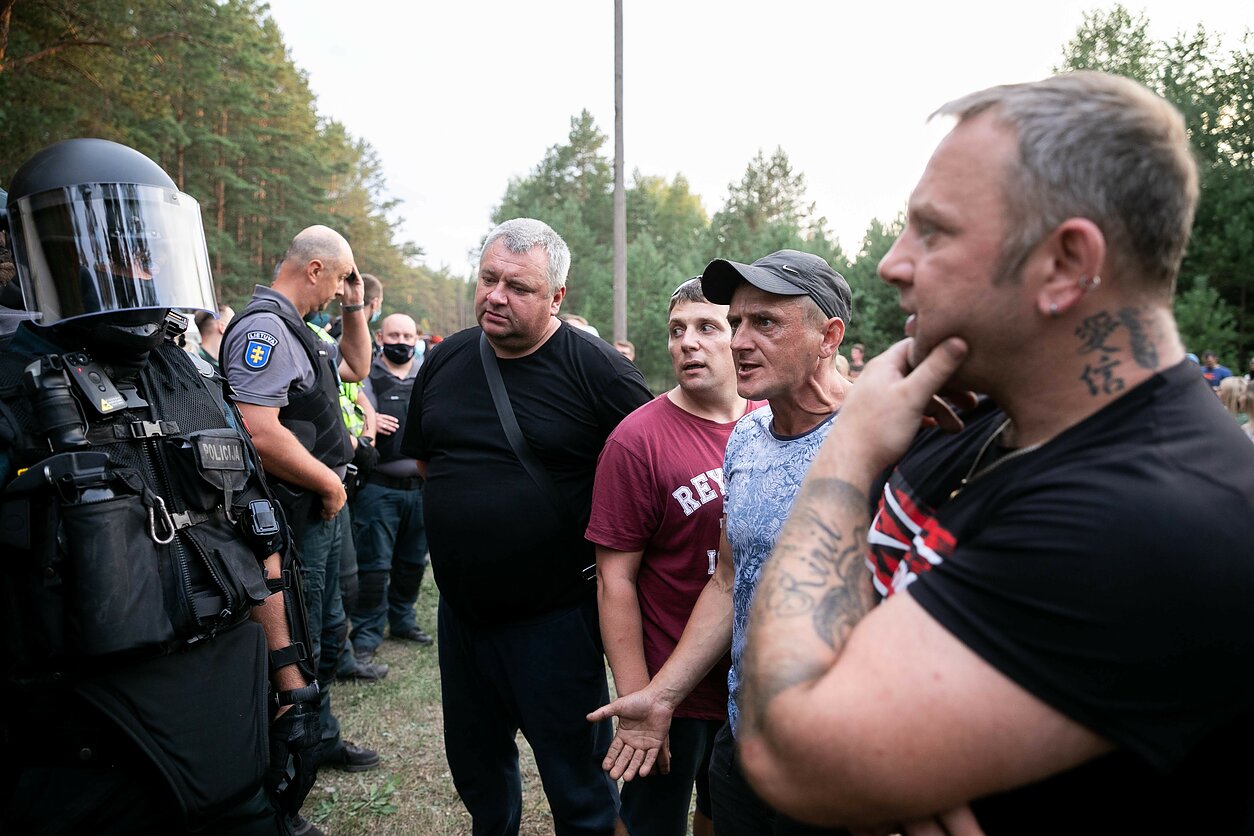 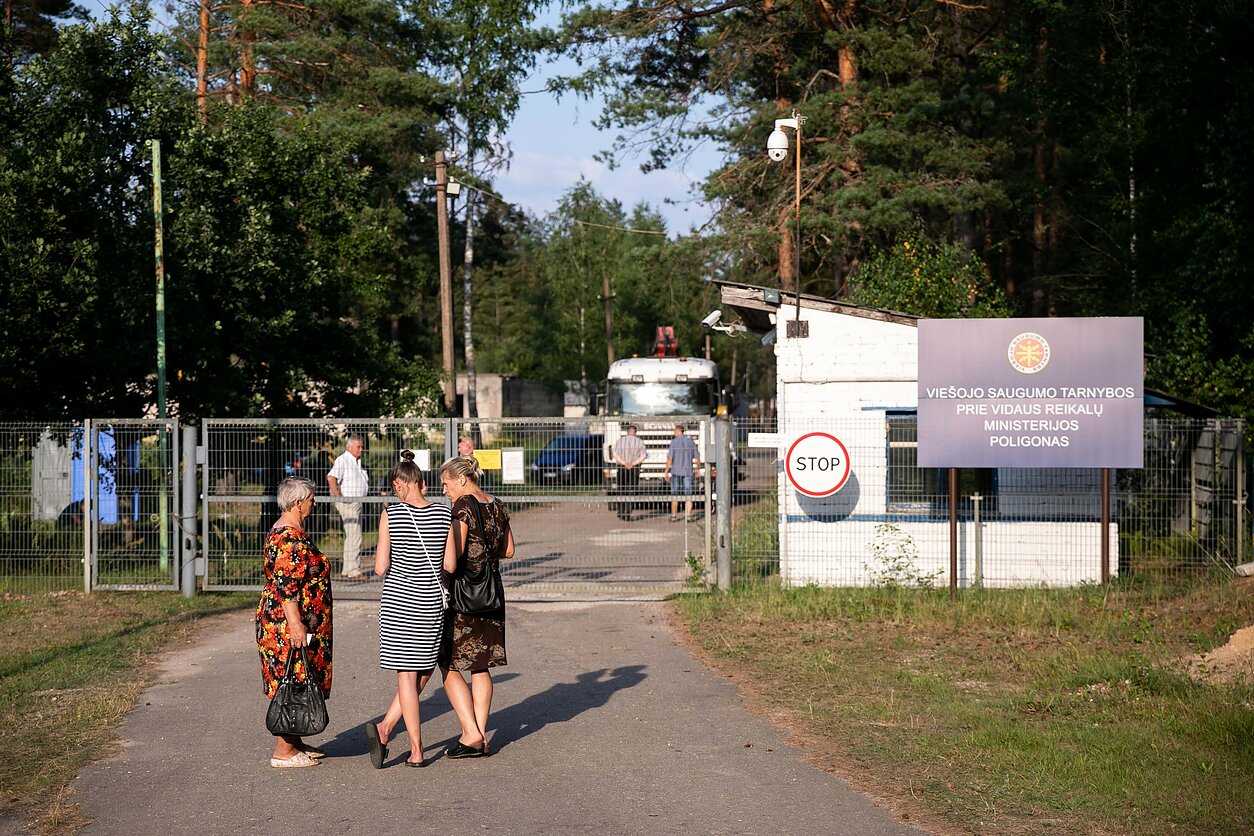 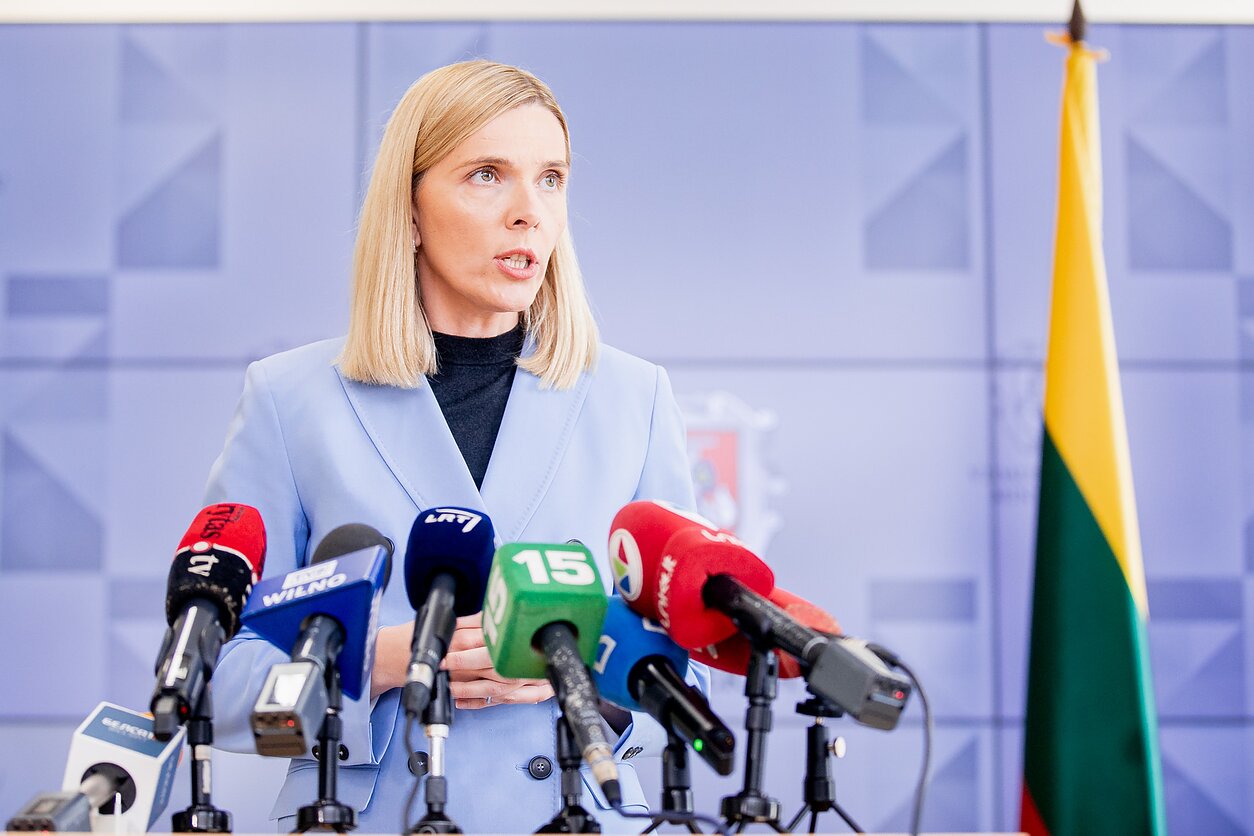 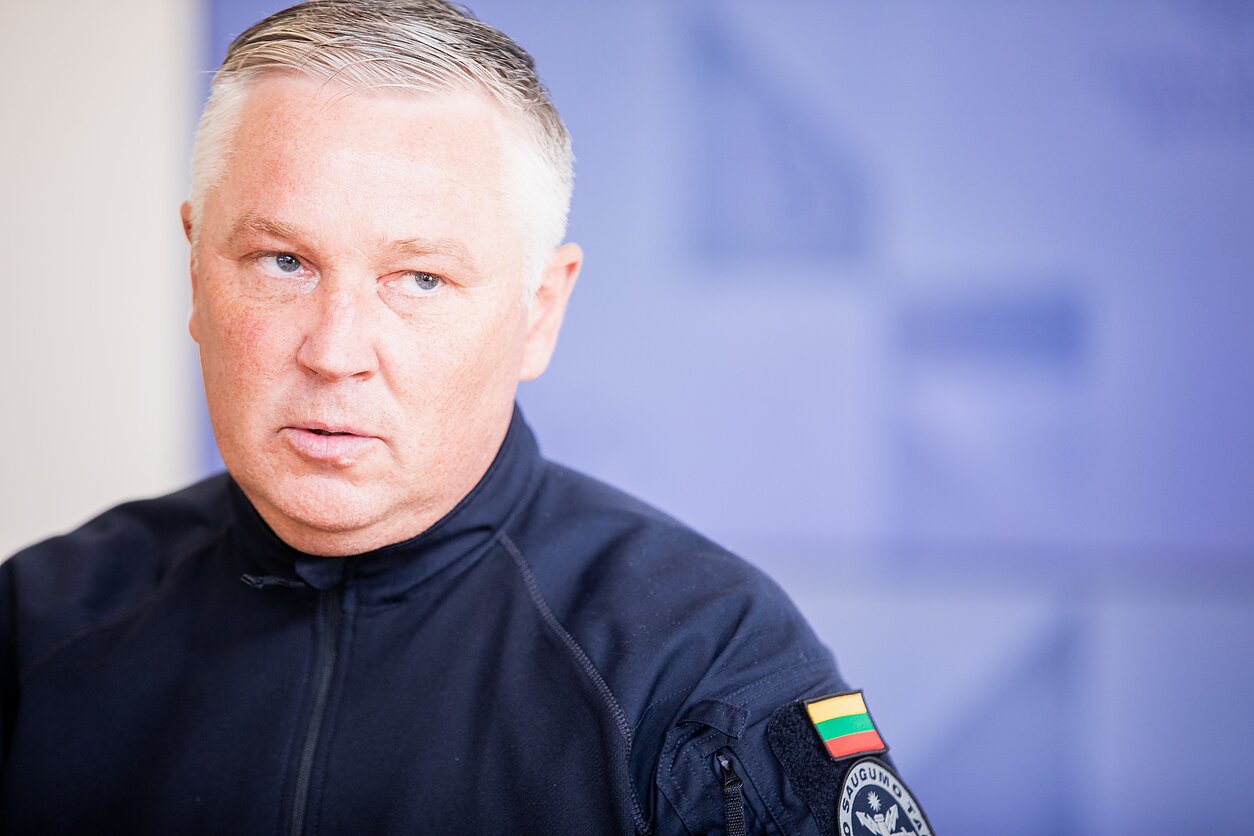