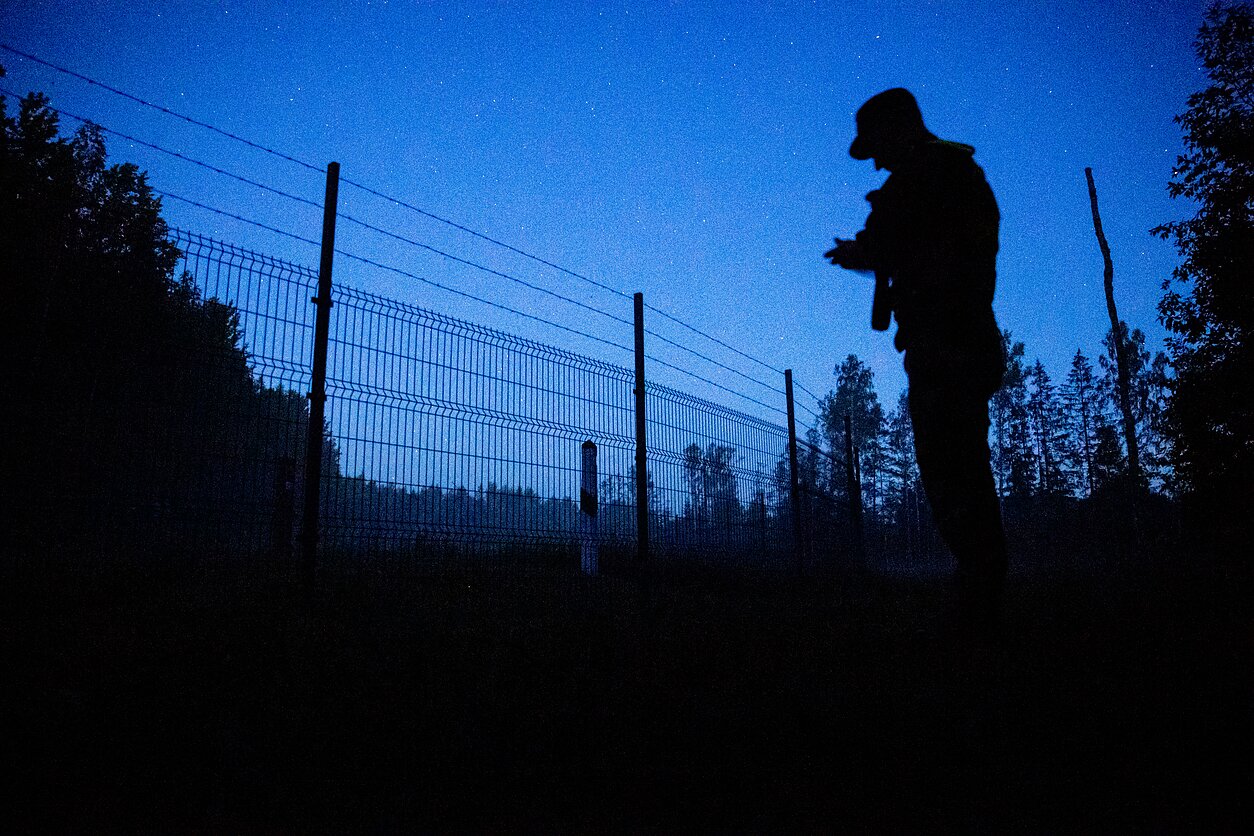 River and fog instead of fence and radars: guarding Lithuania's easternmost border

Increasing migrant flows from Belarus mean that we need to do more patrolling, say border guards at Tverečius checkpoint in eastern Lithuania. As this section of the border is not equipped with surveillance systems, officers rely on assistance from local residents.

The State Border Guard Service (VSAT) monitors more than 52 kilometres of Belarusian border in the Tverečius checkpoint, the easternmost corner of Lithuania.

The checkpoint is surrounded by several ponds, as well as forests and swamps further away.

Nature comes to aid in absence of technology

While there is a fence and surveillance cameras protecting some of the border, guards still need to physically patrol most of it, says Vilkaitis. The fence only extends 4–5 kilometres, and beyond that the only border marker is the Dysna river.

The river, however, does not provide much of a barrier, says Tamara Vilkoitienė, who also works at the Tverečius checkpoint. She adds that “Dysna subsides in summer, and at some points the water barely reaches your knees”. 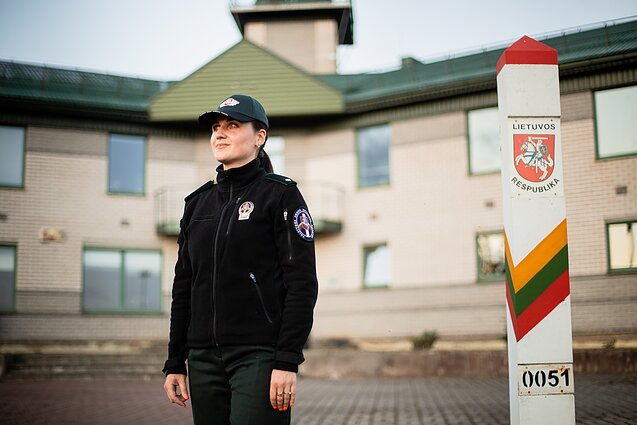 The guards say that this part of the border does not have the strip of sand where footprints would be visible, so they instead employ other methods to trace people trying to cross. According to Vilkoitienė, guards patrol borders early in the morning, when dew reveals footprints.

“We also leave the grass by the border untrimmed on purpose [...] so that we can see the tracks when someone crosses here,” says Vilkoitienė.

However, early patrols and untrimmed grass are not enough to properly protect the 52-kilometre border stretch.

“Without receiving information in advance or having surveillance systems, stopping migrants becomes a lottery, unless we build a Berlin Wall,” jokes Vilkaitis. 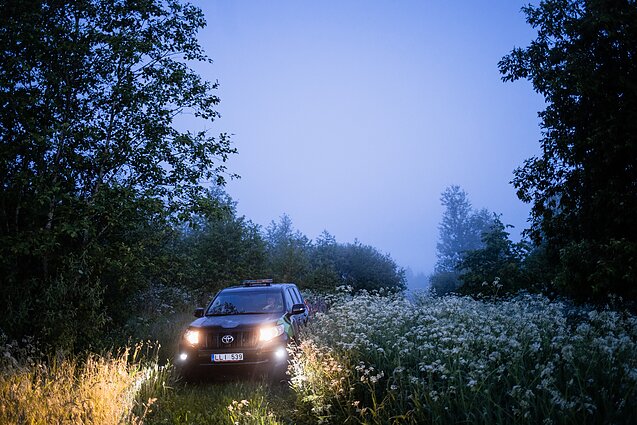 We drove to the border control checkpoint, where border guards and customs officers inspect vehicles entering from Belarus.

One of the officers approached a truck with a Belarusian license plate and began hitting its tires, trailer, cab with a small hammer. He’s checking for unregistered cargo, says Vilkaitis. 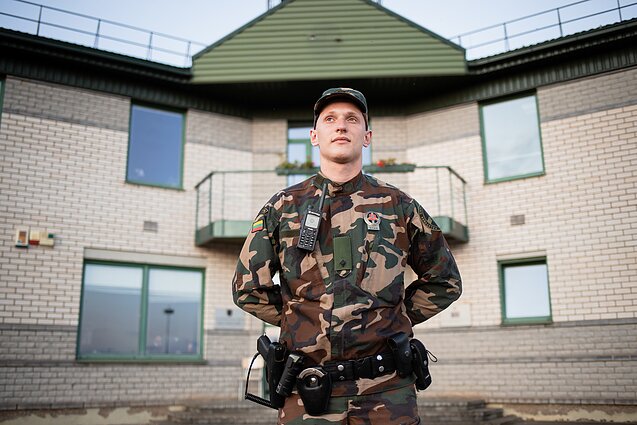 On our way to the Belarusian border, Vilkaitis received a message about a suspicious SUV at the border, responding to it with a brief “on my way, will be there shortly”.

The road was barely visible through the dense fog, yet we found the reported vehicle in a few minutes. No violations detected, it was a group of natural scientists watching birds.

We then proceeded through forest roads, passing villages of Ignalina district, until we reached the border and saw guards protecting the area not covered by surveillance systems.

Border guards use thermal imaging cameras and night-vision devices to detect migrants crossing this section of the border, however, such equipment is not enough. Vilkoitienė points out that the guard service successfully cooperates with locals to track down migrants.

“Migrants go to local residents. The checkpoint cooperates very closely with local residents,” says Vilkoitienė, adding that they ask the locals to report any sightings of unfamiliar visitors, which they do willingly. 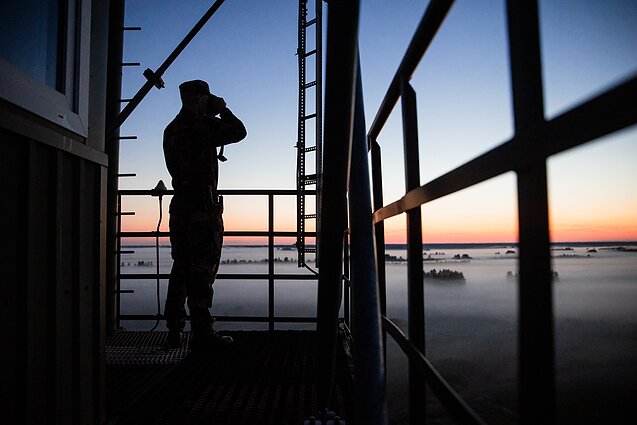 “The majority of residents here are elderly, mostly lonely elderly women [...]. Of course, there were no cases of migrants attacking locals here,” says Vilkoitienė.

Detained migrants are often accommodated at the checkpoint, since the necessary procedures (questioning, finding interpreters, checking documents) can often take a while.

Vilkaitis points out that migrants recently detained at the Tverečius checkpoint mostly come from Iraq, Syria, and Liberia. Earlier, he says, most of the migrants used to come from Vietnam or Chechnya.

Migrants are also from different age groups, and often come in families. Vilkoitienė admits having witnessed some truly heartbreaking cases.

“A Tajik woman was detained. She was there with eight children, and she was disabled. She lived at the checkpoint with her children for about two months,” recalls Vilkoitienė. “Red Cross workers would continuously visit her, and she was supplied with a care package of food and personal hygiene products once a day. [...] We also brought her clothes and food. It’s such a pity.” 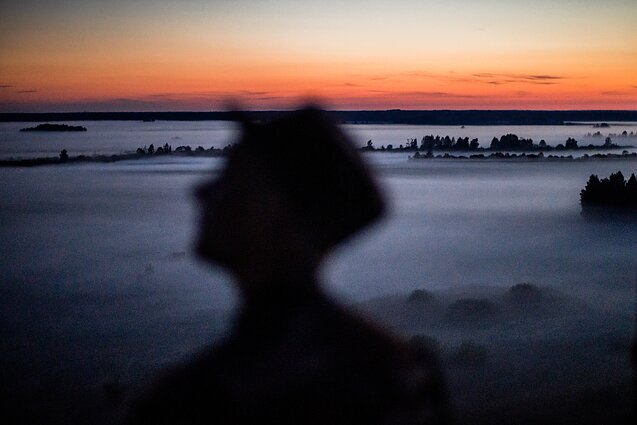 Vilkoitienė also remembered a case when guards detained a family of four: a husband, a wife, their 5-year-old child and a 3-month-old baby. The mother’s breast milk had dried up from stress and she could not feed the baby.

“The baby cried at night, the mother tried feeding him cookies and water. The next morning, I brought her baby formula. She explained that because of her religion she can only feed the baby with her breast milk, and not the formula. But she later agreed to take the formula,” says Vilkoitienė.

Not easy to identify leaders

We left the forests stretching across the Belarusian border behind, and returned to the Tverečius checkpoint at sunrise. After sharing a cup of coffee, Vilkaitis took us to the VSAT observation tower, taller than a nine-storey building. 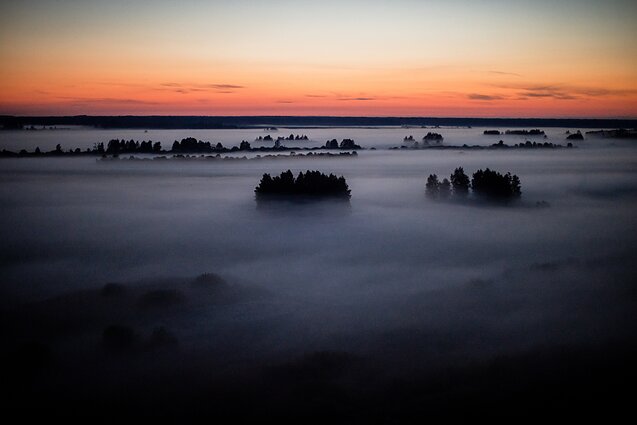 A view from the observation tower / J. Stacevičius/LRT 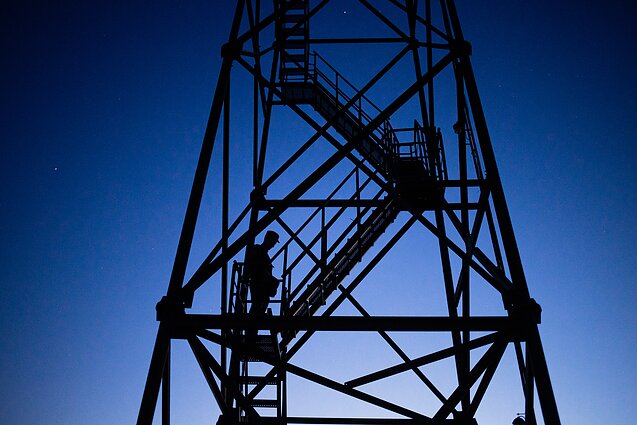 He says that, oftentimes, migrants are led to the border and left alone with a promise that someone will come pick them up shortly. They never do.

“It isn’t easy to sit it out in a forest, hidden somewhere, in such conditions,” says Vilkaitis, adding that many migrants get tired of waiting for some car that was supposed to pick them up, and turn themselves in to the border guards after 2-3 days of hiding.

“You can’t stay there without eating or drinking, so you’ll show up to the officers sooner or later.”

Recently there is a tendency of migrant groups being led by some leader or guide, says Vilkaitis.

“It is difficult to identify the leader, as they would not confess. Before you would see a man from Chechnya and some sixteen short Vietnamese people, and it’s immediately clear who the leader is, since the bearded Chechen man dressed in camouflage colours stands out,” explains Vilkaitis. 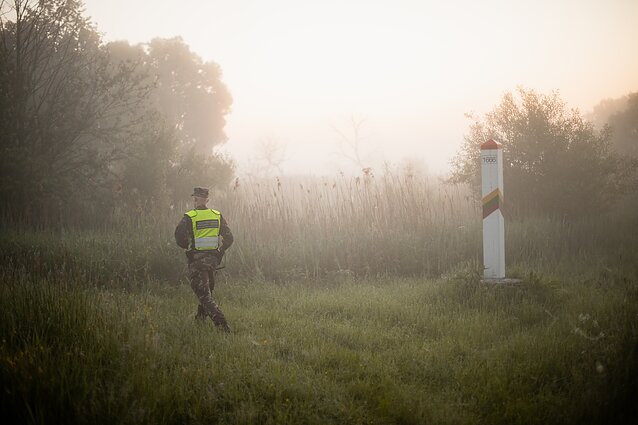 According to him, migrants most commonly fly to Russia to obtain a work permit and earn money, then find a leader and travel through Belarus to the EU.

It is difficult to pinpoint why migrants decide to cross the border illegally, say the guards. Some flee due to oppressive governments, selling all of their property and leaving the country.

“I remember an Iraqi man asking for asylum in Lithuania. He could speak 14 languages, and learned Lithuanian as well,” says Vilkoitienė. “He eventually got his translator’s license and began translating from Kurdish to Lithuanian. It was strange that a person returned to work at a checkpoint where he was detained.”

For many, however, Lithuania is a temporary stop on their way to Western Europe, according to Vilkaitis. 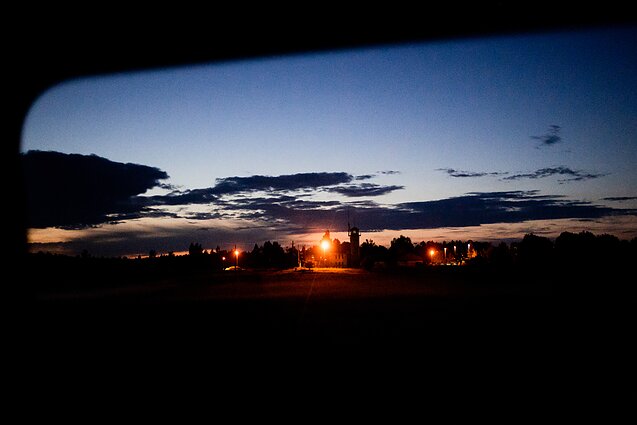 At the end of May, Alexander Lukashenko said Belarus would no longer stop “drugs and migrants” entering Lithuania and the EU.

Vilkaitis has seen massive migrant flows while participating in Frontex missions, so Lukashenko’s claims did not intimidate him.

“We have experience. There is nothing to fear.”

However, Vilkaitis noticed that the relationship between Lithuanian and Belarusian border guards has since changed.

“Excuses the Belarusian guards make when we detect an obviously illegal border crossing are funny, they say that it’s beavers, elk or foxes that enter Lithuania instead of migrants,” says Vilkaitis. “Before, we would talk to the Belarusian officers when we met them. Not about work, just about life. Even that is almost gone now, we only greet each other.”

When the guards were done with their night shift, we returned to the Tverečius checkpoint. On our way, we passed another border guard SUV.

“Colleagues at the Puškai checkpoint detained a group of Iraqis,” explains Vilkaitis. 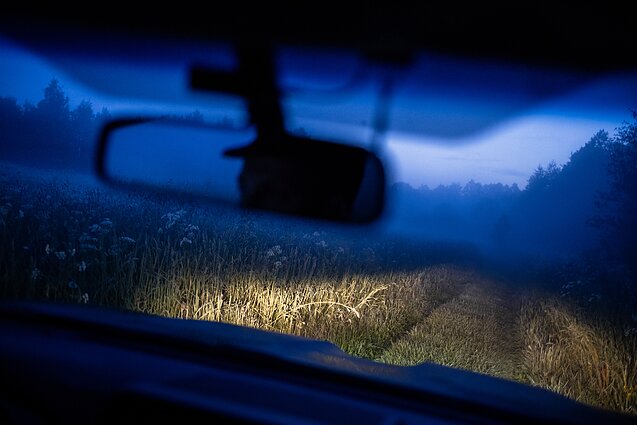 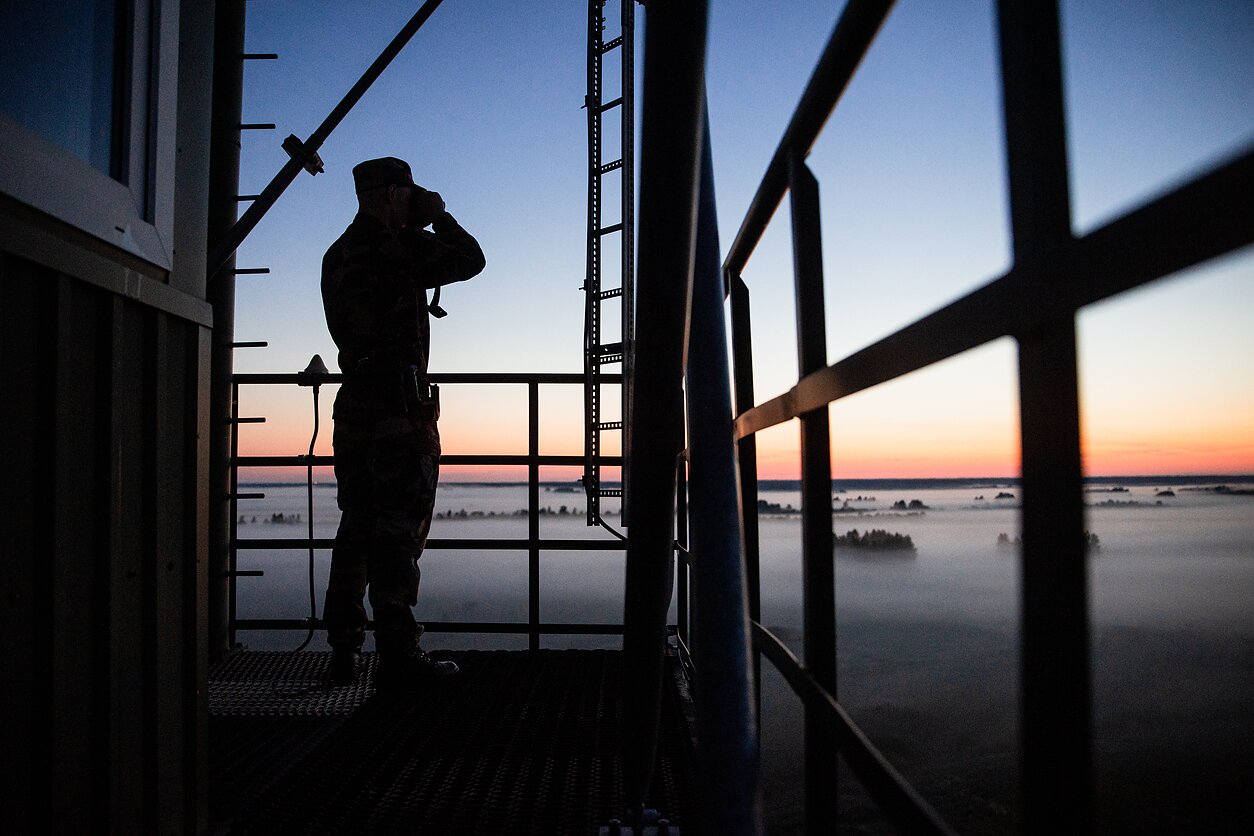 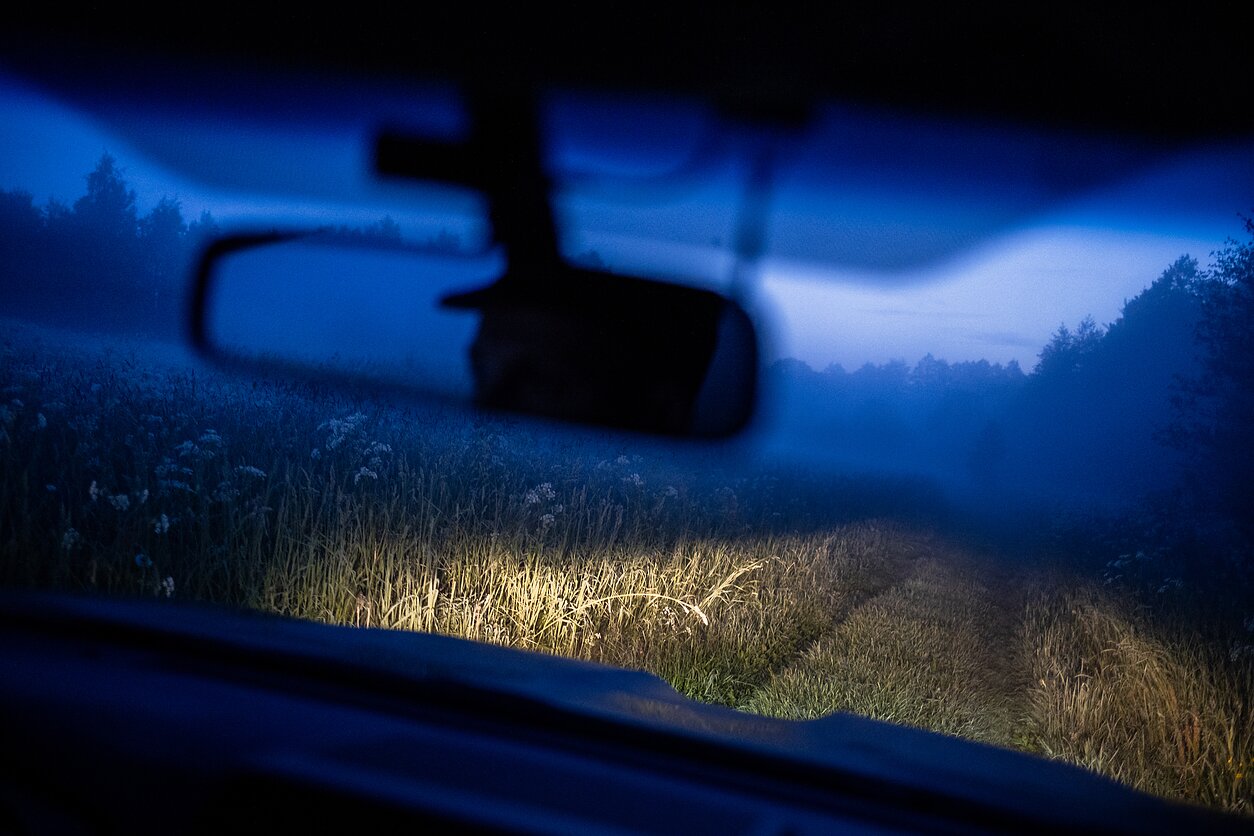 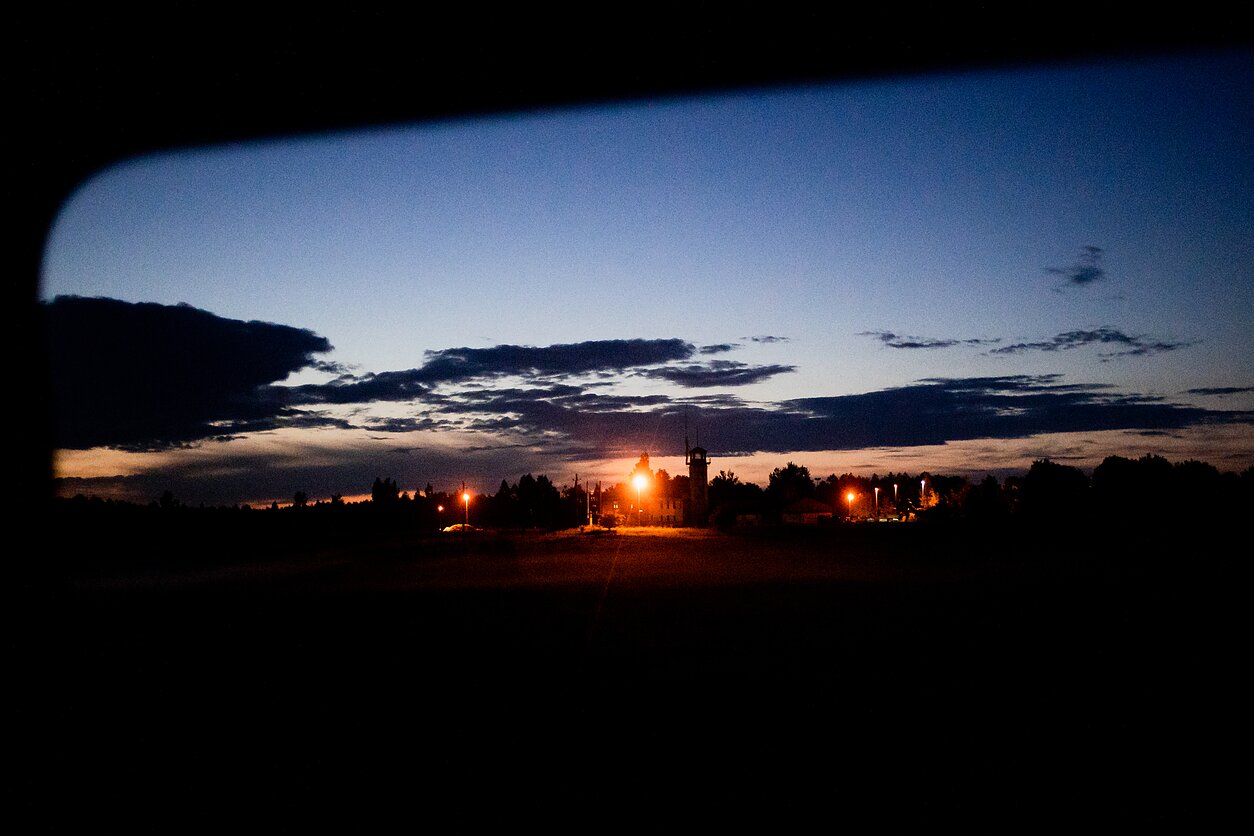 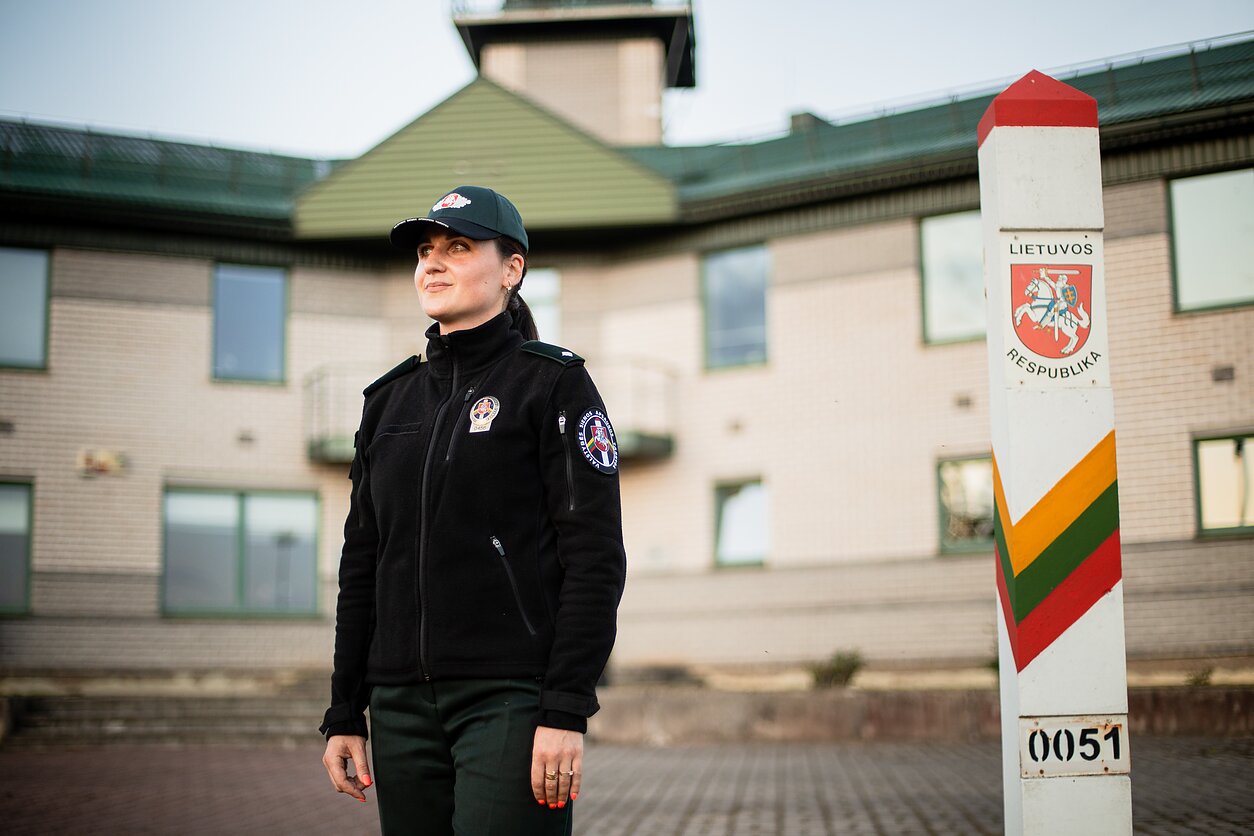 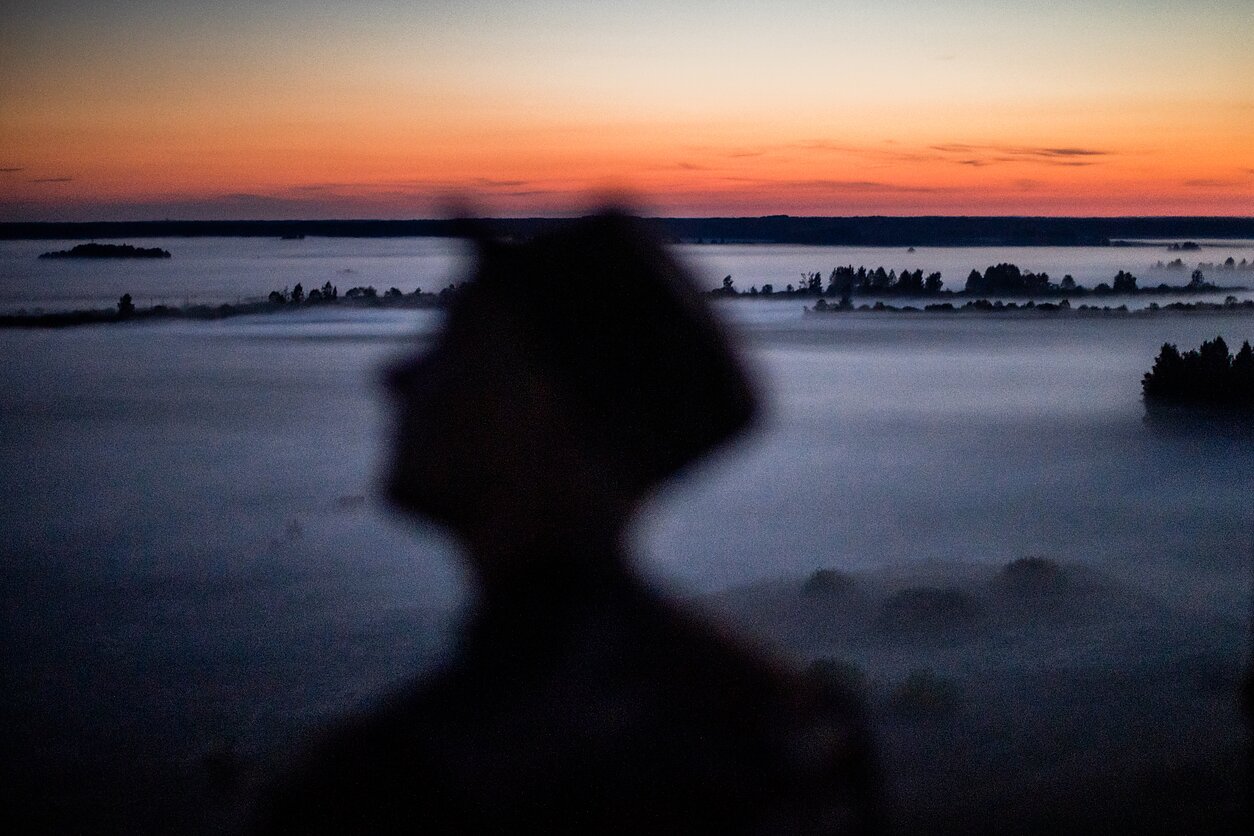 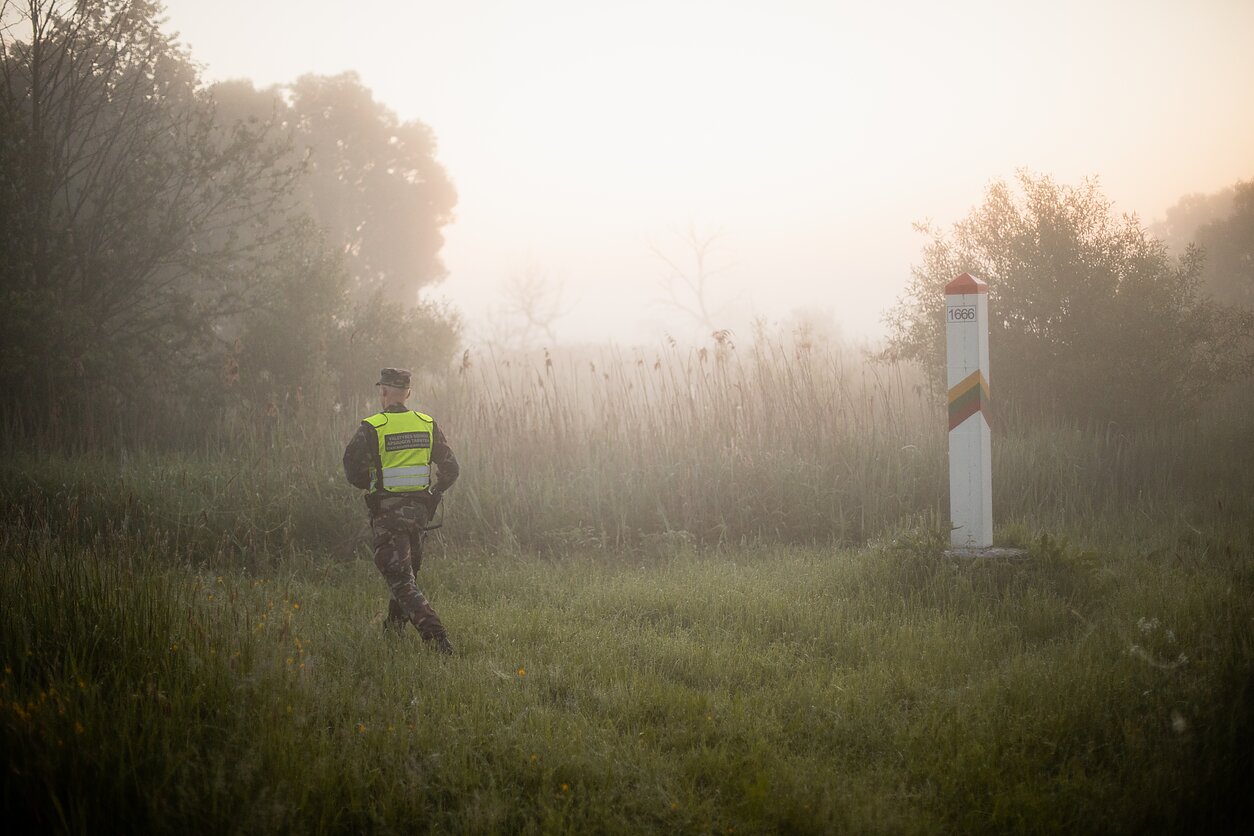 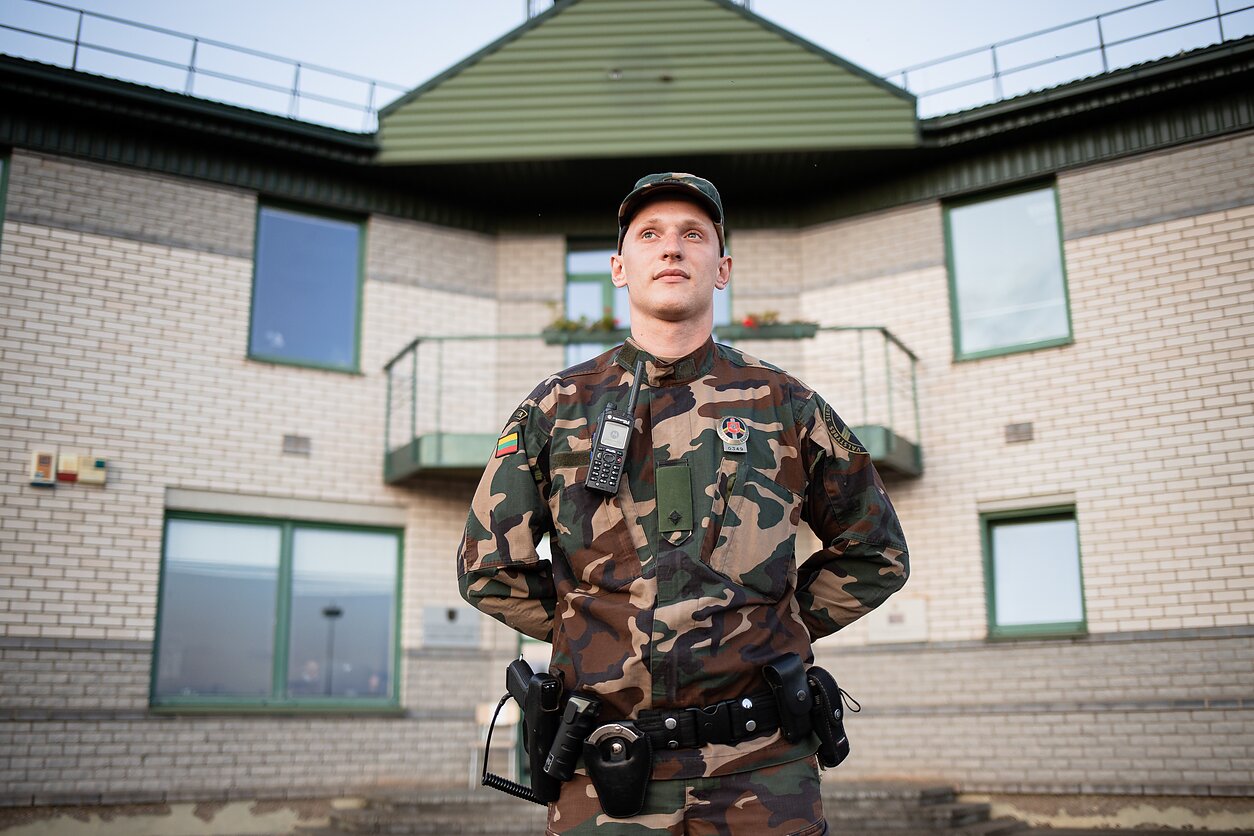 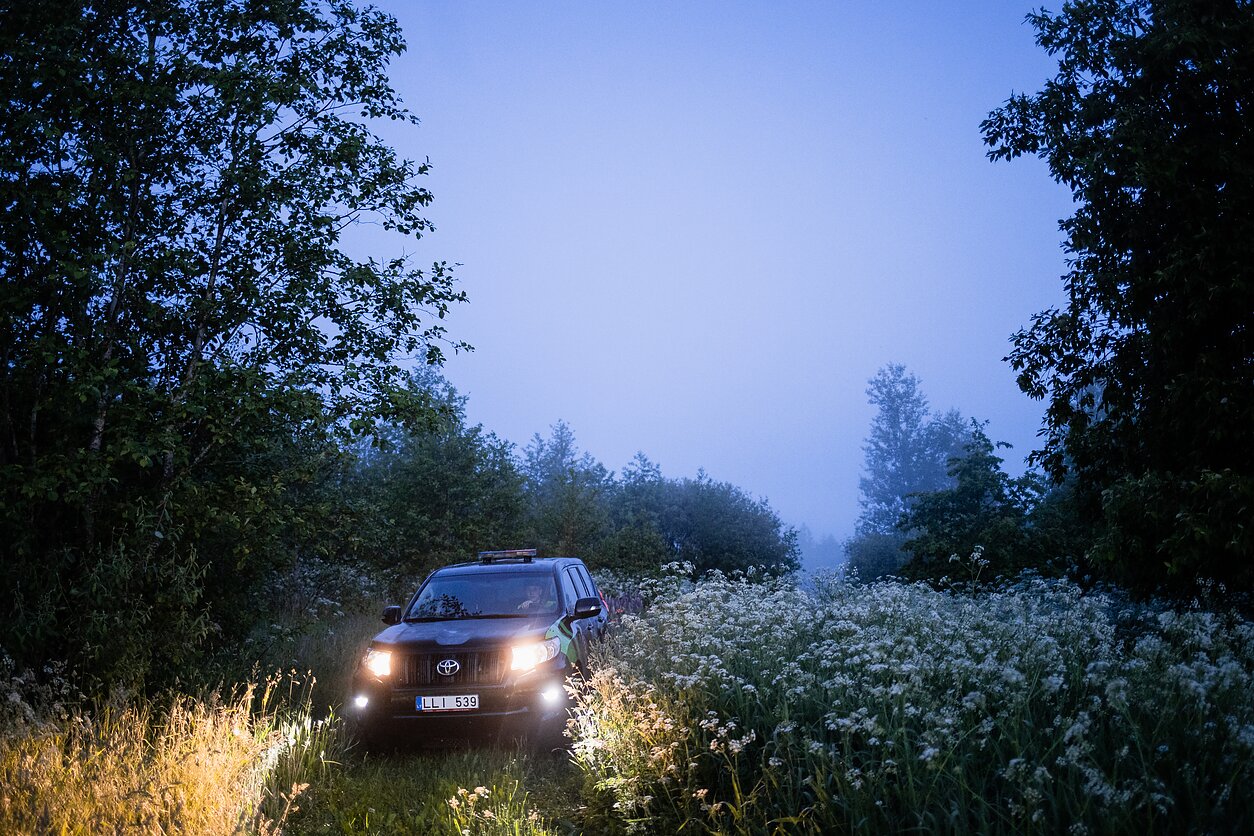 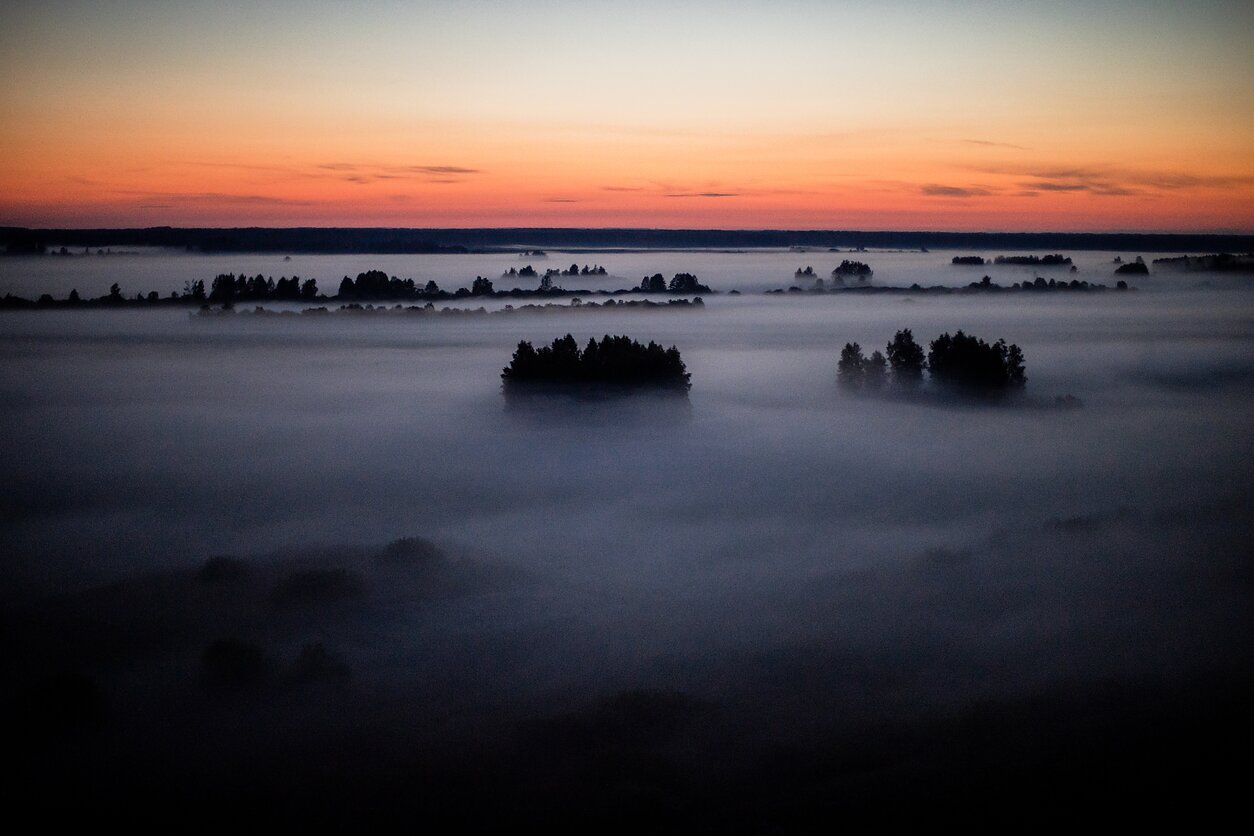 A view from the observation tower
10 / 11J. Stacevičius/LRT 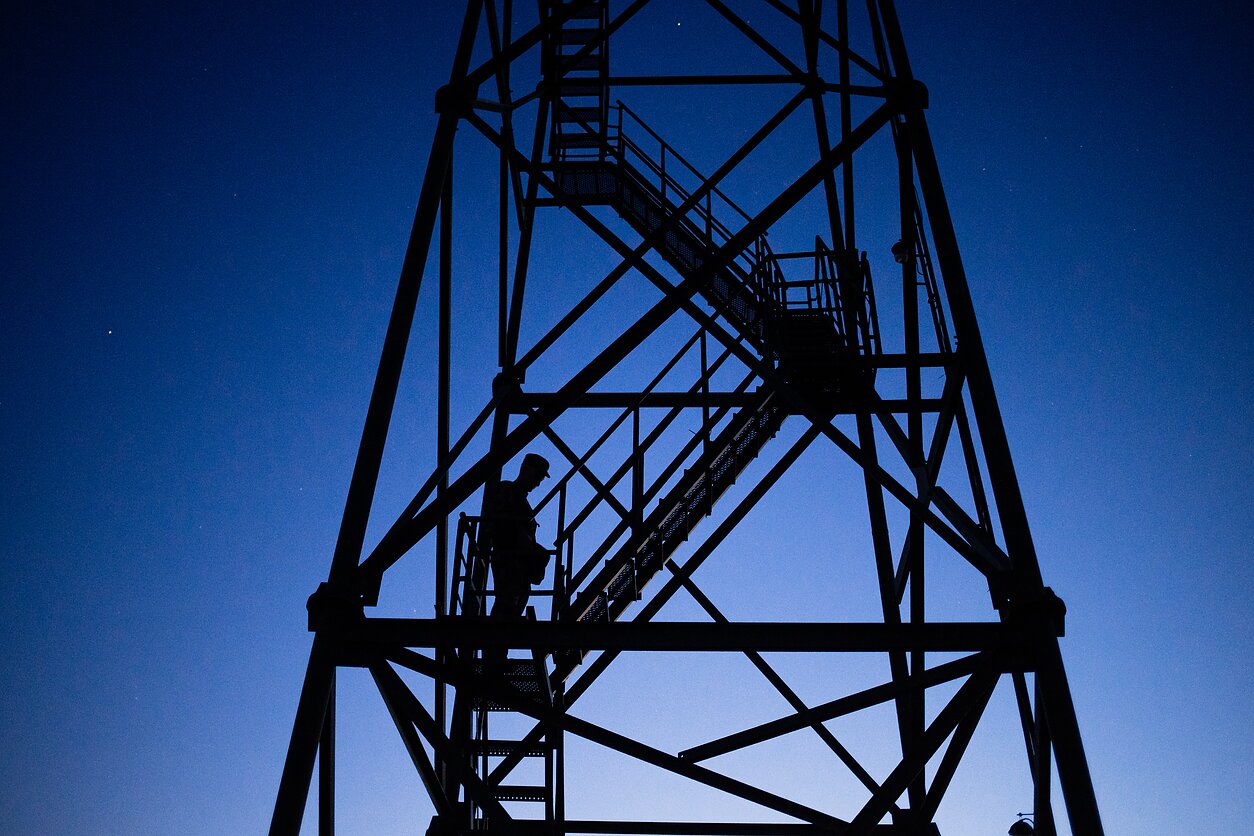 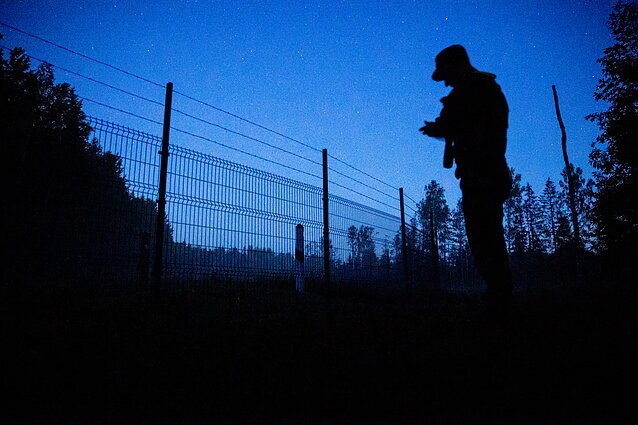 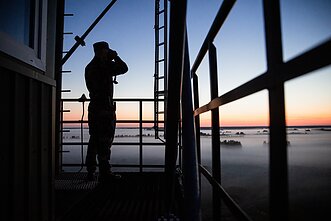 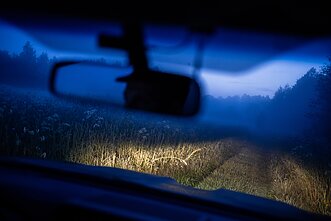 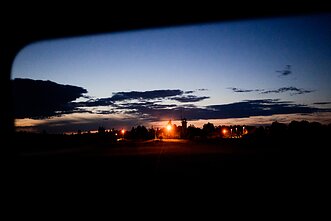 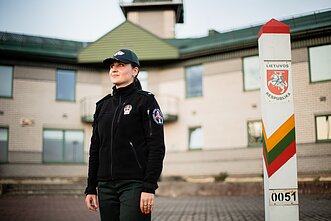 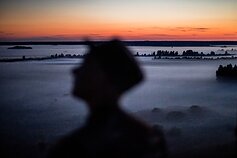 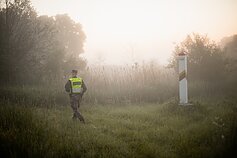 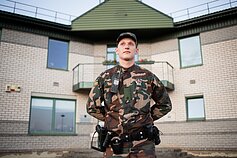 River and fog instead of fence and radars: guarding Lithuania's easternmost border