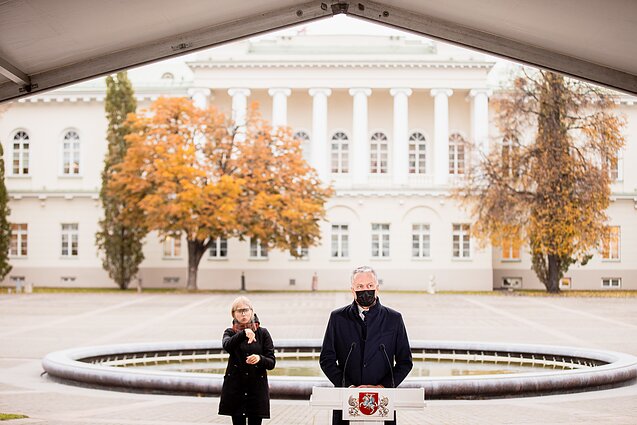 Gitanas Nausėda in the courtyard of the Presidential Palace / J. Stacevičius/LRT

President Gitanas Nausėda held a press conference on Wednesday to detail his vision for a welfare state – the key part of his campaign during the 2019 election – ranging from reducing social exclusion to increasing defence funding.

Nausėda presented his programme ahead of the upcoming negotiations on a new government with the leaders of three centre-right parties that won the recent parliamentary election.

While Lithuania's government ministers are appointed by the president, they need to be approved by the parliament and are essentially picked by the ruling coalition. Still, the president has some political leverage to influence the cabinet's composition.

Nausėda said on Wednesday he wanted the government “to be sustainable, have strong political support and be capable of implementing real, not paper, reforms”.

“The protection of the society, not narrow interest groups, determination to seek changes in key areas, genuine attention to people, competence, responsibility and honesty – these are the main criteria I am setting for members of the future government,” the president said.

Asked by reporters how he would judge candidates for ministerial posts, Nausėda said he would look for alignment with his own welfare state.

“I won’t conduct an exam, like the one ministers would go through in the past,” Nausėda said, in reference to his predecessor Dalia Grybauskaitė who once examined the ministerial candidates' command of foreign languages. 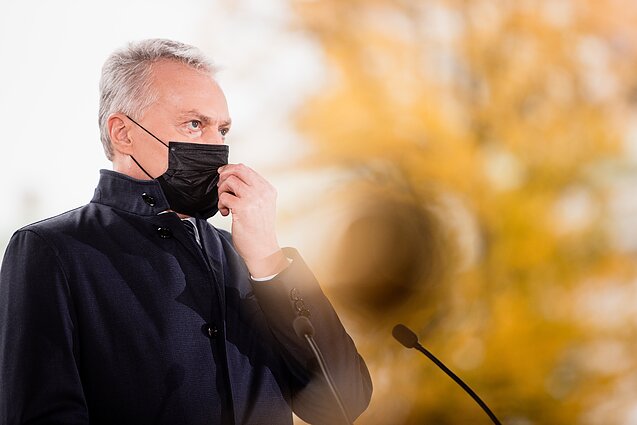 “I plan to have conversations on the things a minister sees as key in their area of responsibility,” he said. “With no doubt, I will look into how that compares to the welfare state aspiration, but that will not be a bullet-point comparison of our positions.”

“The most important thing is for the person to be competent and wish to implement changes in their sector over the period of time set for them. Decency and professionalism are absolutely key as well,” Nausėda said.

He said he found a lot of common ground with the election winners on key priorities.

Lithuania's new government must have a clear plan to manage the coronavirus pandemic, President Nausėda said.

A smooth transmission of power is especially important, he added.

“There's just no time for the post-election euphoria. The new government must have a very clear pandemic management plan straight away, as well as a team ready to implement it,” Nausėda said.

“The spread of the coronavirus in Europe and Lithuania is becoming hard to manage, therefore, we all are facing new major challenges. The public and businesses [...] have to go through previously unforeseen challenges. Therefore, smooth transmission and takeover of power is very important today,” he added. 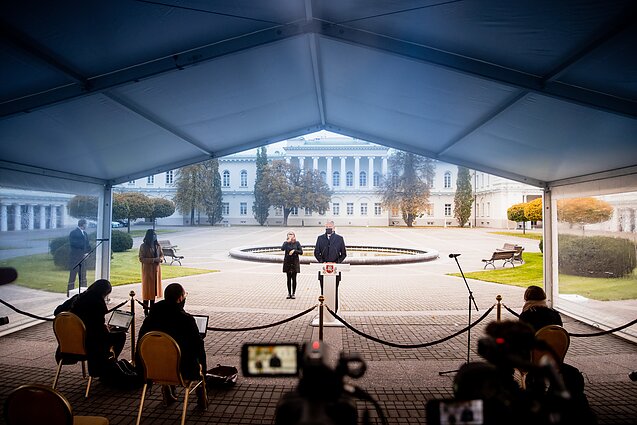 It is also important that the coronavirus crisis does not increase social exclusion and poverty, according to President Nausėda.

The state and the society need to be made fairer by reducing income differences.

“We could talk about a fairer state and society, if the difference between those on the biggest and the lowest incomes were at least no more than five times,” Nausėda said. “To achieve this goal, it will be important to ensure that the coronavirus pandemic does not have long-term effects on social exclusion and poverty.”

The government must speed up increases in retirement pensions, according to the president, since a society is judged by how it takes care of its seniors.

“Pensions have to be increased faster for their level to match Western European standards, therefore, I will initiate necessary legal changes,” Nausėda said. 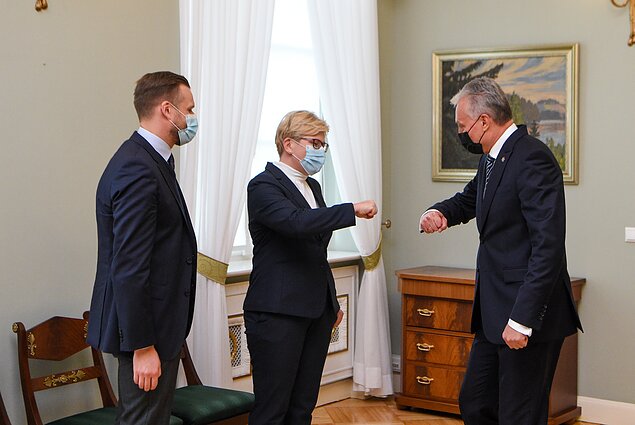 “We won’t be able to achieve that without strong and independent municipalities. Together with my team and other government institutions, I will seek to secure that the average salary in the regions reaches at least 85 percent of the level in the capital city,” he said.

After the current government presented its draft for the 2021 government spending bill in mid-October, the president's office said it wished pensions to grow 9 percent, rather than 7 percent as proposed.

The president also called for more spending on research and development.

The existing situation is “our disgrace”, he said, as Lithuania allocates less than 1 percent of its GDP on R&D, much less than the advanced countries in the the EU and beyond.

“We can hardly expect major innovations as long as Lithuania's R&D funding is below 1 percent GDP,” Nausėda told reporters.

“Our rate is still half of the EU average, not to speak about the most advanced countries in the world. It does not create preconditions for a fruitful R&D ecosystem, does not allow our young talents to develop and encourages brain drain,” the president said.

Digitisation is key to fostering innovation, he noted. 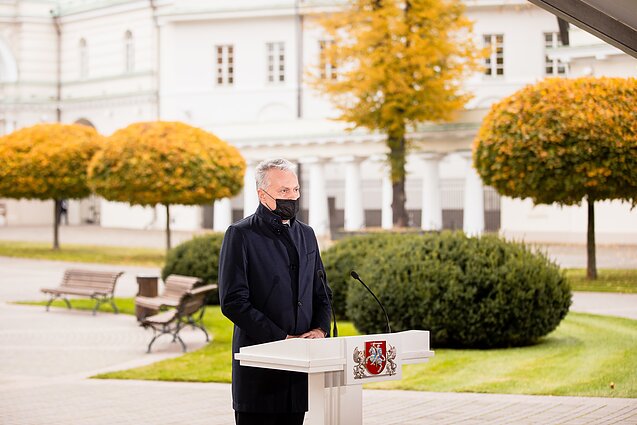 “We should therefore consolidate the state's information systems and ensure that we no longer have services that cannot be provided remotely and, if possible, in real time,” Nausėda said.

The Lithuanian president also underlined that the public sector needed to open up faster to have ethical AI-based solutions.

“Everything that's not classified should be open and accessible to every citizen. Unfortunately, that's not the case today,” he said.

Figures from the Organization for Economic Co-operation and Development show that Lithuania invested 0.88 percent of its GDP into R&D last year, much below the OECD average.

Moreover, the GDP share for R&D has been consistently going down in recent years. In 2015, the country spent more than 1 percent of its GDP.

Some political parties in Lithuania mentioned increasing R&D funding as one of their priorities during their campaign. The liberal Freedom Party, which has been invited to join the new coalition, vowed to seek an increase in R&D funding to at least 3 percent GDP.

The new government will assume its powers in December and is expected to be led by Ingrida Šimonytė of the conservative Homeland Union (TS-LKD). 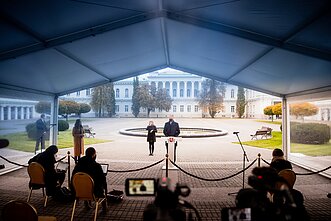 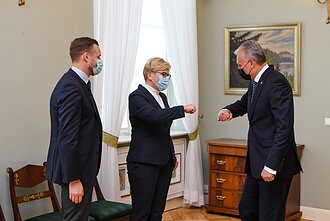 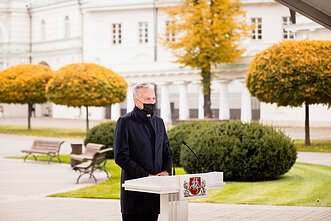 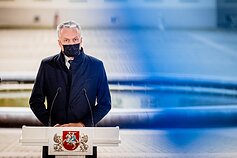 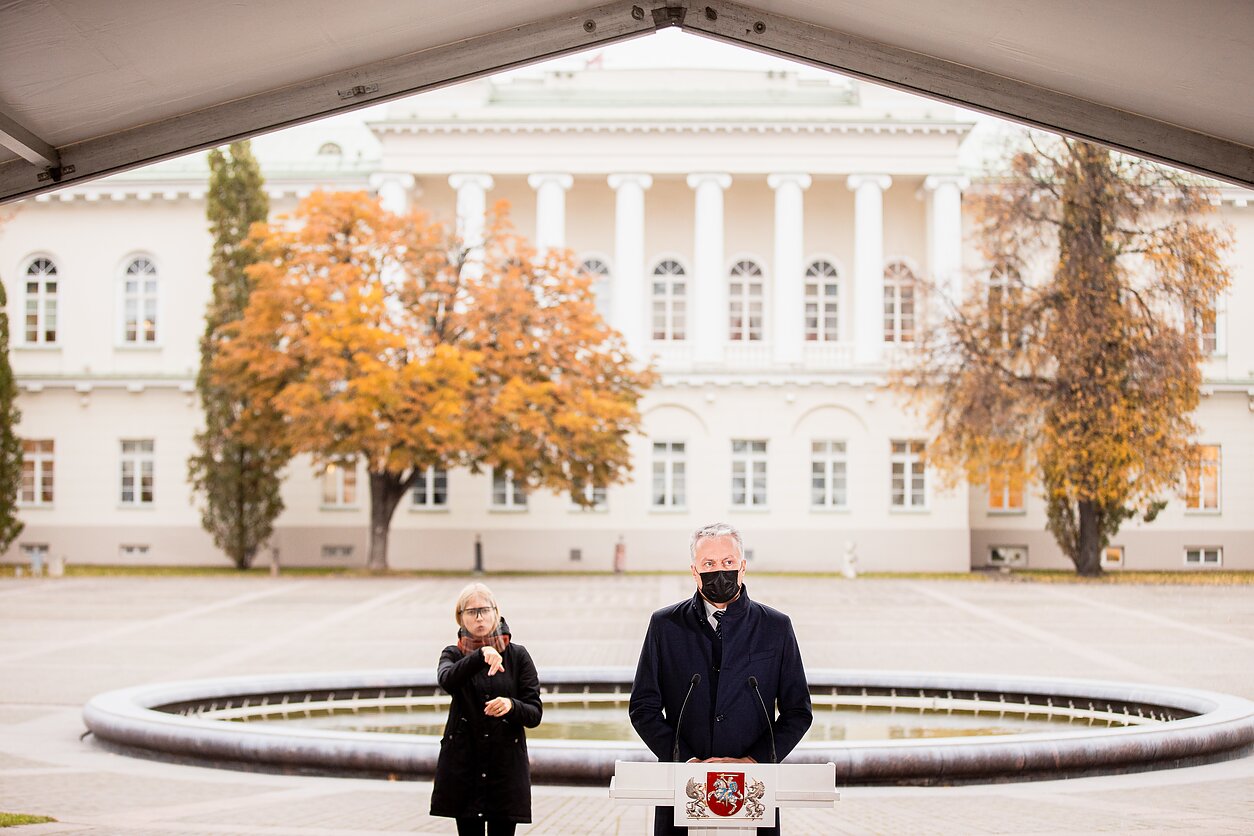 Gitanas Nausėda in the courtyard of the Presidential Palace
1 / 6J. Stacevičius/LRT 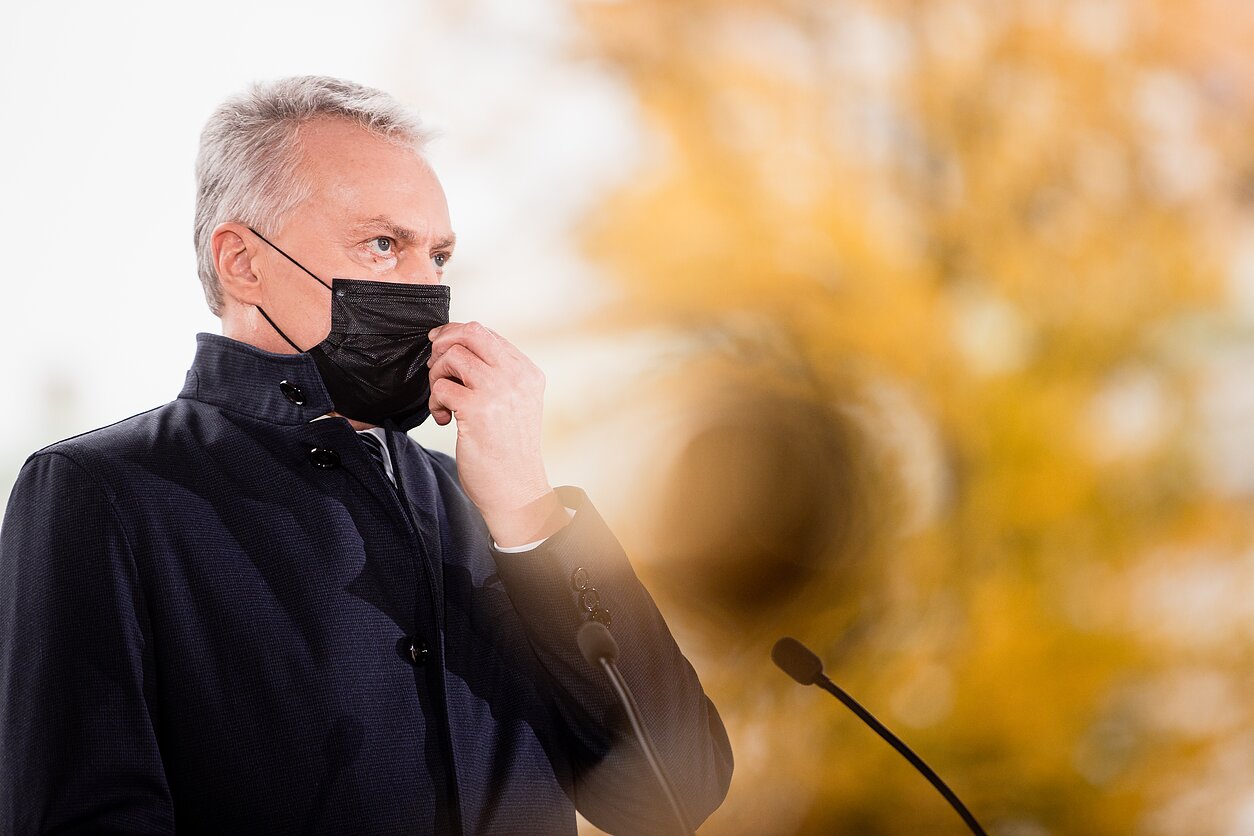 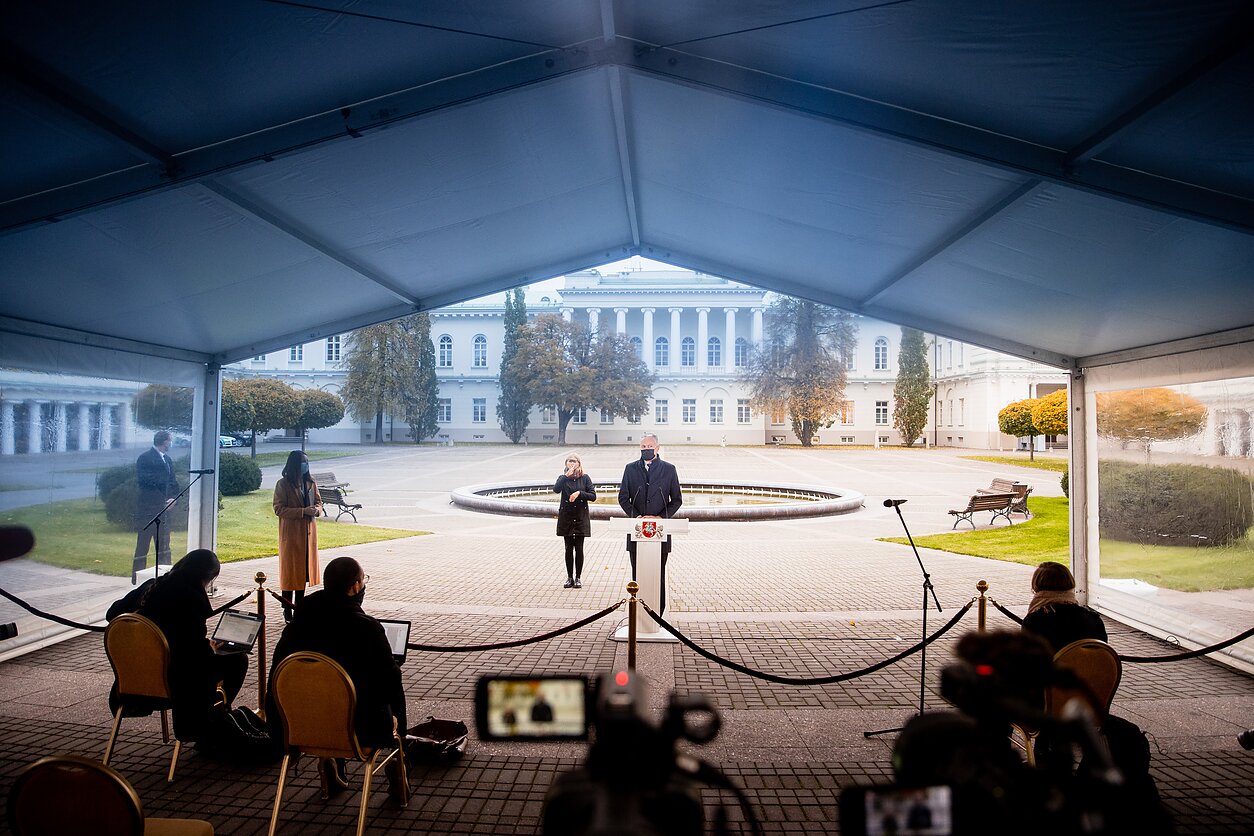 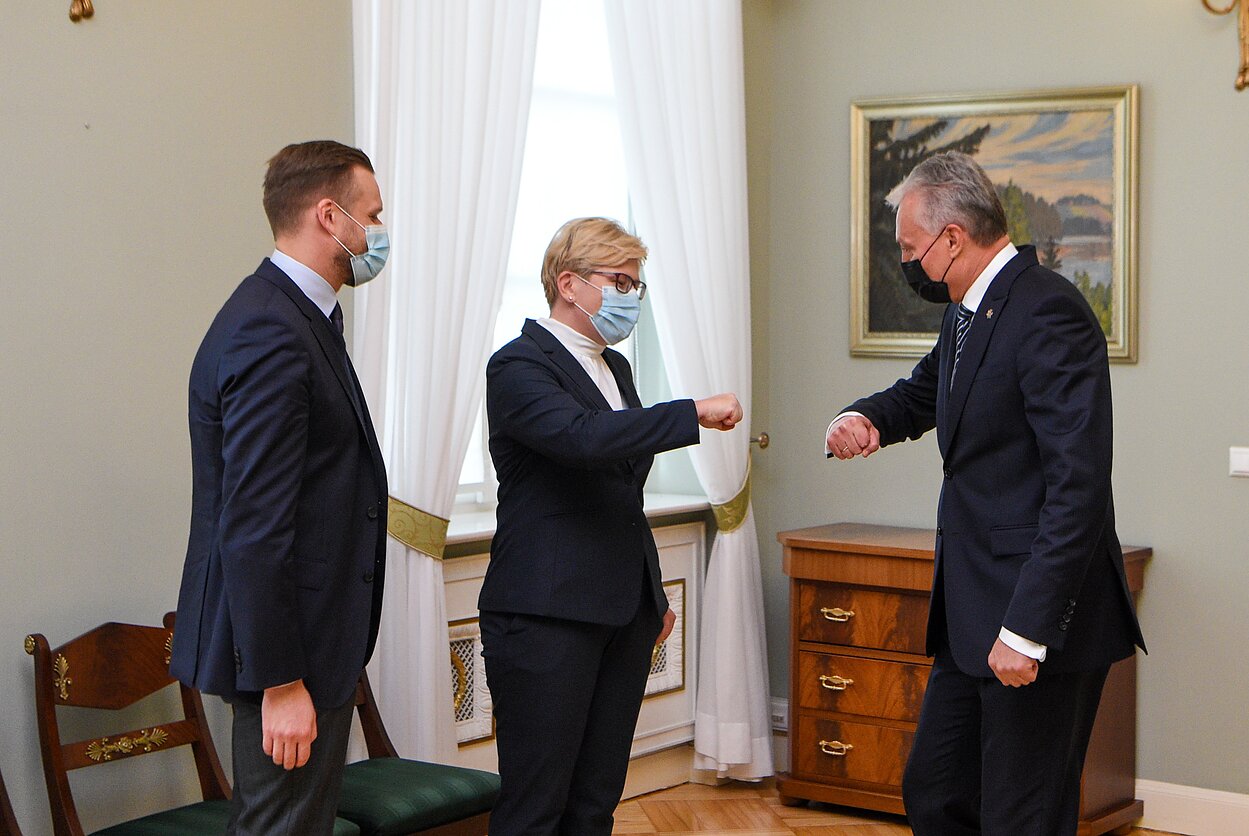 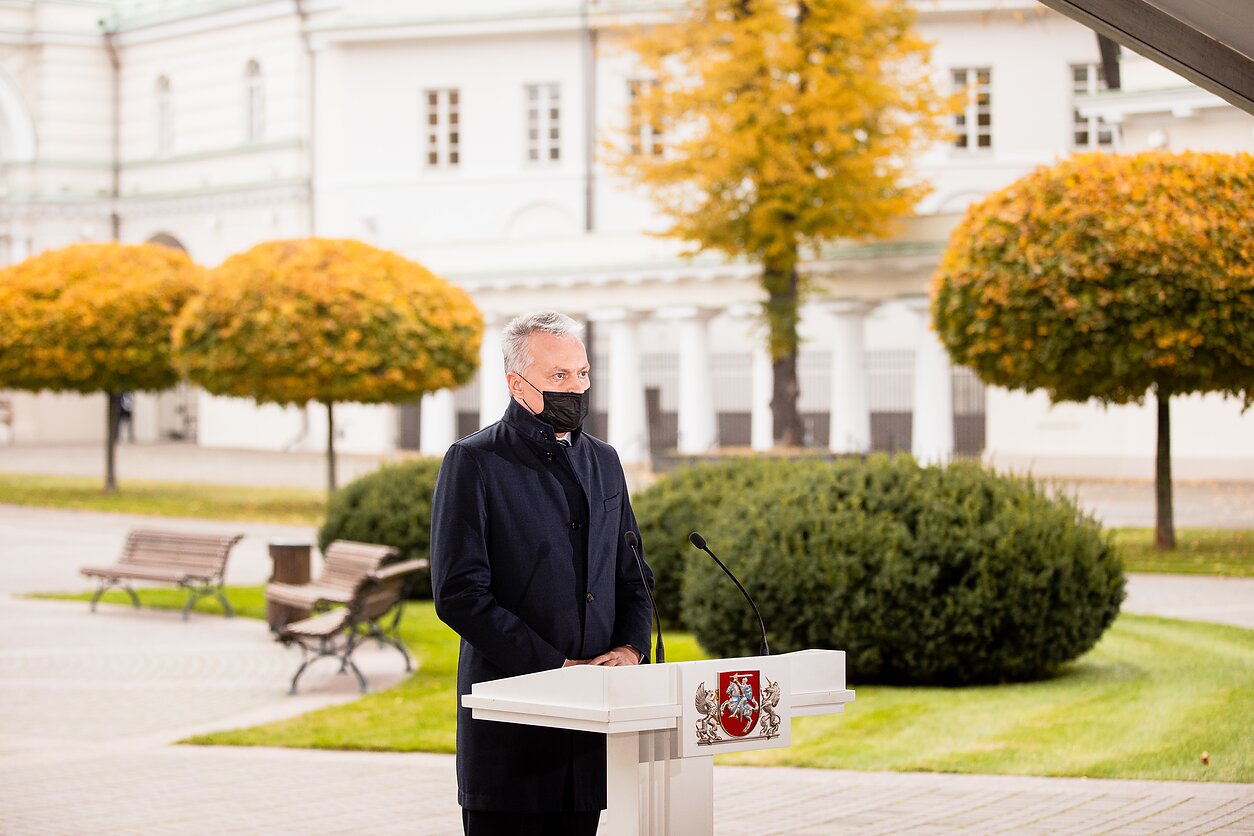 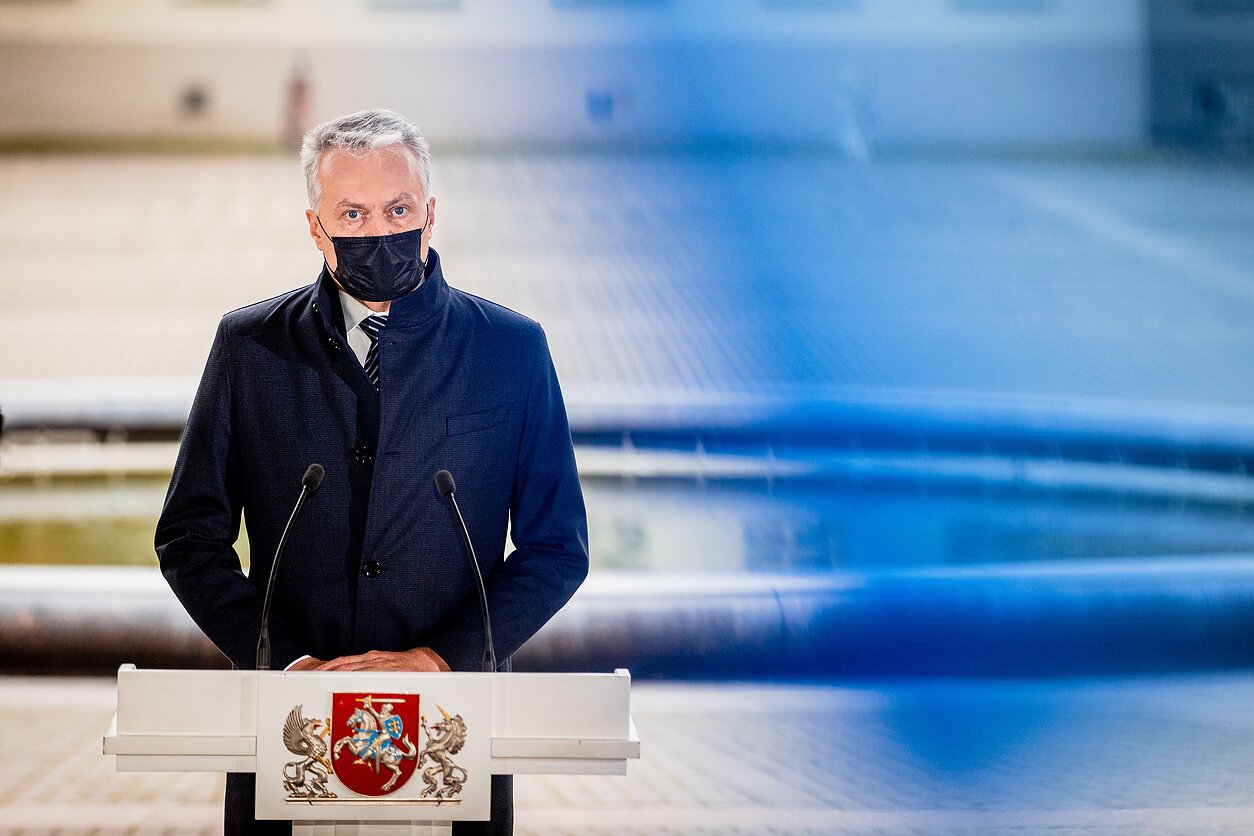