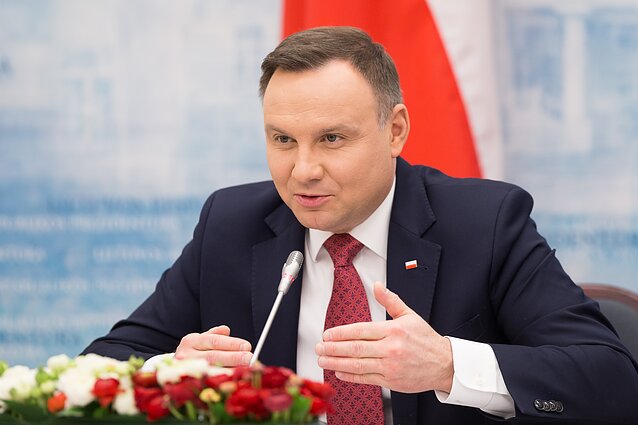 Polish President Andrzej Duda on Monday congratulated Gitanas Nausėda on his election as president of Lithuania and invited him to visit Poland.

“In the hope of maintaining the high intensity of political contacts at the highest level, I sincerely invite you, Mr President, to come for a visit to Poland,” Duda said in his congratulatory message released by the Polish embassy in Lithuania.

“I am convinced that this visit will play an important role in strengthening the traditionally good relations between our countries.”

The Polish leader said he was confident that cooperation between the presidents of the neighboring countries would contribute to further strengthening the Lithuanian-Polish relations and developing “friendship and cooperation” between the nations.

“It is with satisfaction that I take your assessment of Poland as an important partner of Lithuania in the fields of economy, culture and security. I highly appreciate your readiness for a fruitful dialogue with the Polish national minority of Lithuania, too,” Duda said.

“I am convinced that your presidency will contribute not only to the dynamic development of our bilateral relations, but also to greater use of the potential of Polish-Lithuanian cooperation in the international forum, especially in the European Union and NATO. Poland and Lithuania can achieve a great deal by acting together for the benefit of the entire Central European region,” he added.

Nausėda, who will take office in July, has said he would like to go to Poland for his first foreign trip as president.

In a press conference on Monday, Nausėda played down tensions between Brussels and Warsaw over reforms in Poland that the EU says threatens the rule of law.

“When the conflict [between the Polish government and the EU] broke out, Poland really demonstrated its wish to seek compromises and negotiate, and they managed to do so, therefore, I think we will be talking about these issues as well. But one thing we rally cannot deny is the fact that Poland has a very important role in the European Union. Lithuania could do a lot more if it understood its neighbours better,” Nausėda said.