Lithuania celebrates the 16th of February 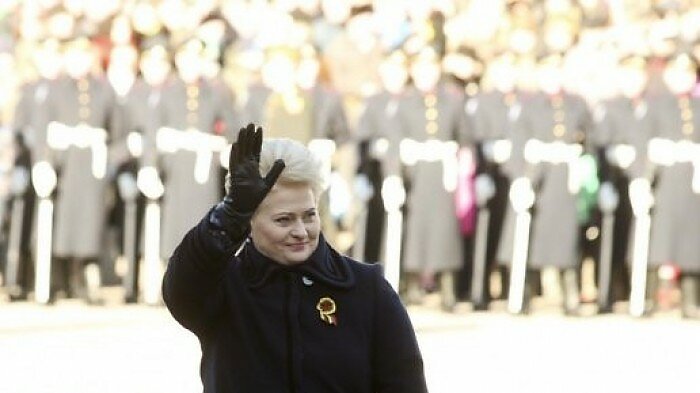 Celebration was marked by numerous events across the country, and citizens say they value freedom even more after war broke in the Eastern Ukraine.16th February is the day of Act of Independence, signed by the Council of Lithuania in 1918.

Celebration was marked by numerous events across the country, and citizens say they value freedom even more after war broke in the Eastern Ukraine.16th February is the day of Act of Independence, signed by the Council of Lithuania in 1918.

Among most important events of the celebration traditionally is a flag raising ceremony of the Baltic States, the solemn Mass at the Vilnius Arch Cathedral Basilica and a special commemoration near the building where the Act of Independence was signed.

The government also hands out state awards to Lithuanian and foreign citizens, in honour of their merits to Lithuania.

The second biggest Lithuanian city Kaunas, a temporary capital of Lithuania during the Interwar period, celebrated by re-establishing a symbolic ‘Soldier’ statue, in the War Museum tower.

The statue was destroyed by Nazi occupants, but now it stands again, and activists, who rebuilt it, say it is a strong sign that Lithuania is ready to defend its freedom, whenever necessary.

Other signs of stronger commitment than usual to defend freedom were rotating US soldiers participating in commemoration and NATO Baltic police jets flying over capital Vilnius.

Lithuania belonged to Russian empire, throughout the 19th century. Despite several attempts of rebellion, the first independence opportunity came when Russia was involved in the World War I. Germany occupied the Western part of the Russian empire, including Lithuania, and the Council of Lithuania had to manoeuvre carefully between demands of the German authorities and the desire for independence.

The opportunity window opened in 1918, when Germany was weakened by the WWI. Independent Lithuania, although it would soon be battling the Wars of Independence, became a reality.

While the Act's original document has been lost, its legacy continues. The Act is the legal basis for the existence of modern Lithuania, both during the interwar period and since 1990.

Rising of the Baltic States’ flags; Lithuanian National Anthem is played as the Lithuanian flag rises

A shot of American soldiers participating in the commemoration

DALIA GRYBAUSKAITĖ, President of Lithuania:
Our voice is not just listened to, it is heard, because of our unique experience. We know what it feels to be deprived of your native land (shots of public), home and relatives. There were attempts to silence us, to take away our language, to split us. (back to Grybauskaitė) However, our nation managed to rise again in a fight for freedom and unity, by standing on our rich history and culture.

Another group of Lithuanian soldiers

Shots from the concert at the Presidential palace; Lithuanian folk music played by traditional instruments

Shots of the 'House of Signatories', a palace where Lithuanian independence was declared in 1918

VYTAUTAS LANDSBERGIS, Lithuanian first Head of State after the country broke away from the Soviet Union in 1990:
At least the House of Signatories is still standing, without being turned into some kind of a casino or something. 97 years ago in this house it was decided that Lithuania is reborn, to rise with its capital Vilnius.

Soundbite (Lithuanian), vox pop, a young man with a flag:
Do you think it is difficult to come here with a flag in order to honour our statehood and look at the events? It is a nice fest, and it is a pleasure for me to be here.

Soundbite (Lithuanian), vox pop, a woman and her baby:
A very big festival for all of us.
Baby repeats – a big festival.
Reporter asks why it is so big.
Baby says – Lithuania.