Lithuania's overpopulated cities of the dead 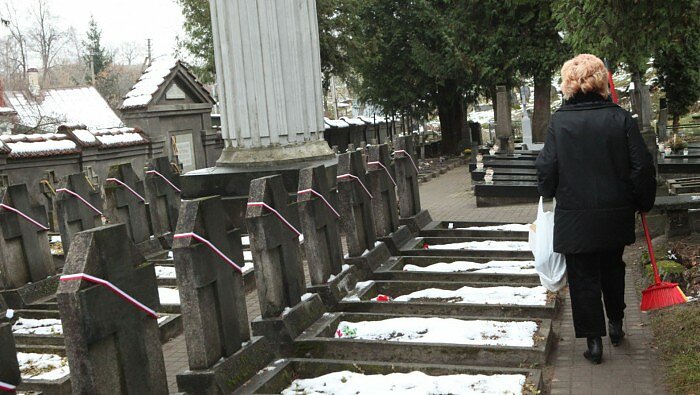 On All Soul`s Day, or Vėlinės, Lithuanians traditionally go to pay respects to the departed. While cities of the living have been thinning lately, architecture of grey crosses and tombstones has only been expanding over the hills and valleys of the country.

On All Soul`s Day, or Vėlinės, Lithuanians traditionally go to pay respects to the departed. While cities of the living have been thinning lately, architecture of grey crosses and tombstones has only been expanding over the hills and valleys of the country.

Cemeteries can be a rich resource of information about the history of people, revealing changes in lives and sensibilities of the living. A new trend has been to look into alternatives for laying the departed to ground, as the ever-expanding necropolises are claiming more and more territory from the living.

Bulldozing the most beautiful graves

There are 6,758 cemeteries in Lithuania, but only 2,025 of them are still accepting new arrivals. According to data of the Cultural Heritage Department, most of Lithuania's historic cemeteries are Catholic, while the list of protected burying sites includes those that used to cater to Lutherans, Calvinists, Orthodox Christians, Old Believers as well as other confessions – Jews, Muslims, Karaites.

Since 1940, when Lithuania was taken over by the USSR, many historic cemeteries were closed down and destroyed as part of the Soviet ideological agenda. New residential blocks or public parks sprung up on top.

The central cemetery of Klaipėda was located on Daukantas Street, accepting new graves between 1820 and 1959. The Soviet authorities ordered to level it to the ground in 1975, leaving but a few tombstones. In its stead, the town built Martynas Mažvydas Park and populated it with modern sculptures.

Dionyzas Varkalis, a proud citizen of the town and veteran of the 1980s Sąjūdis movement, still cannot erase from his memory the images of the old tombstones falling down: “It was one of the most beautiful cemeteries in Europe, with small-scale architecture, brilliant pathway plan! The eastern part of the cemetery was divided into blocks. Each of them lined with cast-iron fence, very fine. Each grave had a separate entrance – a locked gate and a flight of stairs. The western side contained burying vaults, chapels, imported marble – this was where the most prominent citizens of Klaipėda were buried.

"As a kid, I held cemetery to be a sacred site. We would not go there as we were taught to respect the deceased. So when I saw the sheer barbarism of bulldozers smashing the finest of tombstones, I was so shocked that I swore to dedicate the rest of my life to preserving the heritage of Lithuania Minor.”

The brutality of what Varkalis saw changed his life. The man, who was a sailor and ship mechanic by profession, became a restorer.

That same year, 1975, he went to the Ministry of Culture in Vilnius and told the then vice-minister Vytautas Jakilaitis about how cultural heritage was being vandalized. According to contemporary laws, levelling a cemetery was not allowed earlier than 25 years after the last burial. The term had not come yet.

The vice-minister thanked for the information but he could not do anything – the decision to shut down the cemetery had already been made and was in the process of implementation.

Varkalis returned to Klaipėda and found the cemetery full of workers. He grins as he recalls what happened next: “Together with them, we took away what remained of the cemetery – eight truck-loads of ironwork – and hid everything in three sites. We had no idea what we were going to do with it, but the important thing was to preserve. Later it became the core of the Smithery Museum and we built a chapel to commemorate this tragedy.”

There is a whole lot of similar stories from the Soviet times. In 1809, the Lutheran community of Vilnius set up its cemetery on Tauras Hill. Vilnius City Executive Committee made a decision in 1958 to close down the burial site and, within fifteen years, erase all traces of tombstones, monuments, fences, chapels that used to stand there. The Labour Unions' Culture House, a colossal white classicist building, sprung up on one side of the site, while the ultra-modernist Registry Office now stands on the other.

Bronislovas Genzelis, philosophy professor and 11 March Independence Act signatory, can still recall how, after World War Two, there were plans to build a motorway right across the heart of Vilnius and its biggest historic Rasos Cemetery. Fortunately, the plan did not materialize.

Genzelis believes that if one wants to learn anything about a town or a village, one must go to its cemetery: “When a person goes to cemetery and sees a tombstone of some interest, a cross, or a wayside shrine, he starts to reflect, a historic memory is awakened within him. Monuments remind of the culture of the time, of people's ability to build.”

The philosopher maintains that a burial site gets ingrained in the memory of the relatives of the deceased: “We cannot cover all Earth with cemeteries, but a well-kept or valuable grave speaks about a period in time.”

Things have changed after Lithuania became independent again – now, levelling a cemetery requires a particularly good reason and a special permission, while sites included in the Registry of Cultural Heritage are untouchable.

According to the law, a cemetery can only be torn down in case it presents a threat to public health. Also, if no less than 25 years have passed since the last burial. If a decision is made to shut down a cemetery, all remains must be exhumed and scattered in a special ground or re-buried in another site.

According to Valdas Kaminskas, chairman of the 2 November Society, cemeteries in many European cities are not exactly sites of eternal rest. In Germany, he says, people sign contracts with town cemeteries, specifying the number of years the remains of their deceased relatives will be kept in ground. After that, one must either pay to extend the term or have the remains exhumed and cremated or reburied.

According to Kaminskas, in other countries bodies are usually buried in free plots first, and then in family graves. Eventually, cemeteries get closed for additional burials and, when the period of rest passes, they are shut down.

“Almost the entire world observes the same rule – cemeteries operate for a certain period of time. Some countries are now reducing the stretch – the rest period is set at 50 to 70 years, until the generation of the buried dies out and its offspring, who take care of graves, either move further or pass away too. The third or fourth generation is usually distant enough to take care of the graves, so they tend to naturally vanish.”

Kaminskas says that specialists of cultural heritage do not allow to destroy old cemeteries. Almost all historic burial sites in Lithuania – and there are about 2,000 of these – are included into the Registry of Cultural Heritage. Therefore even those cemeteries that have long ceased accepting new inmates cannot be used for other purposes: “In modern times, it would be unimaginable to level a cemetery and build a motorway over it. It would cause a scandal, even though no one had any scruples about it in the Soviet times.”

Turning to the past

Juozas Dautartas, deputy director of Vilnius Regional Environment Protection Department, admits that Lithuania is running short of new burial sites, therefore there is a need to come up with new ways of afterlife. He suggests drawing inspiration from the past – people would be simply put in the ground with a wooden cross marking the spot. Within less than a hundred years, the cross would naturally decompose and the grave would turn into a hump of earth.

“Take a look at what they do, say, in Dzūkija (region in southern Lithuania). They bury people in old plots, if they know, more or less, where their families lie. I know of cemeteries that are 300-400 years old, but they are still quite small. They must have been burying people on top of old graves,” he says.

Dautartas insist that areas allocated to burying must be curtailed. One of the options is to choose fast decomposing wooden coffins without metalwork. Bury more people in family graves. Or look for inspiration to compact cemeteries in other countries – lawns with simple stone plaques bearing  names of the deceased.

Lithuanians, Dautartas says, have almost a cult of death: “It would be better if we loved the living more. We allocate huge territories – and beautiful ones, on the outskirts of towns – and fill them with tombstones, one bigger than the next. We could go about more modestly. Look, for instance, at the old Bernardine cemetery, or Rasos.”

Columbariums instead of cemeteries

Almost a year ago, Lithuania's first crematorium was opened in Kėdainiai. In September, it served its thousandth “client.” In general, though, it can cremate about 400 bodies a year.

Current laws prohibit scattering ashes in public places – as they sometimes do abroad – therefore cinerary urns are usually buried in the ground, kept at home, or in columbariums.

Columbariums – special structures for keeping urns with ashes – operate in six cemeteries in the country. The last one opened in Kaunas in October, yet one in Klaipėda is already full. There are plans to open more in Vilnius, Panevėžys, and Utena.

One vault in a columbarium can hold up to six urns, so it can be analogous to a family grave. This way of keeping remains of the deceased is attractive because it requires less space and is rather low-maintenance, comfortable to people who cannot visit their departed relatives as often.

Last year, an association by the name of the 2 November Society launched an on-line database Atminimoknyga.lt. It allows people to post memoirs, photos, video clips about their deceased relatives who are buried in Lithuania and thus create on-line sites of commemoration.

The database currently hosts 21,298 entries about graves in 36 cemeteries. At least 10 percent of them says “unidentified” – that means that the identity of a person buried in a particular spot is unknown.

An entry records the exact location of the grave, a photo of the tombstone bearing any kind of record, and, of course, information on the deceased. As village cemeteries often host entire extended families, entry on one person often leads to information about his or her parents, relatives and, bit by bit, there emerges a narrative about the entire community.

“For various reasons, small rural cemeteries disappear, villages thin out, so we want to start by preserving information about graves in rural cemeteries,” the 2 November Society chairman Kaminskas says.