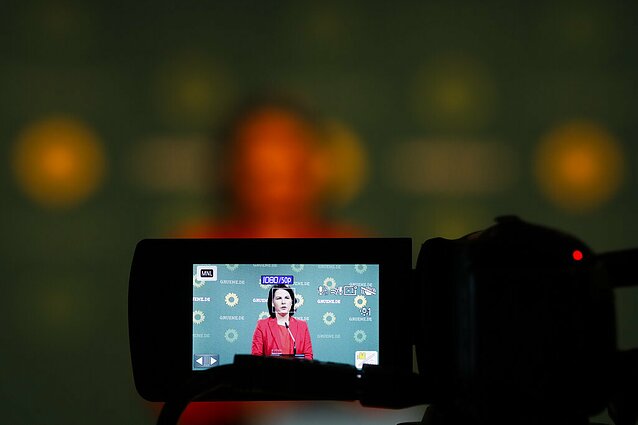 Vilnius has long hoped for Germany to take a harder stance on Russia. With the Greens eyeing the chancellor’s seat, will the Baltics find unexpected allies in Berlin? Jeroen Bult writes.

Is German foreign policy heading for a revolution? Will Berlin finally relinquish its ever-cautious approach of Russia? These tempting questions must have crossed the minds of Baltic policymakers after hearing the news that Annalena Baerbock has been nominated as the Chancellor candidate of The Greens for the German federal elections in September.

And the idea of a vociferous criticaster of the Putin regime leading a political party that keeps growing in opinion polls is a most captivating one indeed.

According to a poll that was published on April 25, Die Grünen count on 28 percent of the electorate (up six percentage points) and have, virtually, become the biggest party.

So, is there a Wende in the air, a profound change that will also affect the the Baltic states? Estonia, Latvia and Lithuania would not regret this, since, in their view, Germany should finally adapt its Russia policy to the harsh reality of reviving Russian expansionism, to the new post-Crimea world. 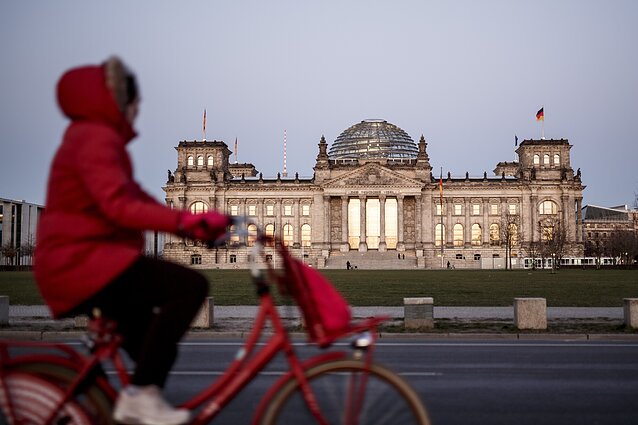 A woman rides past the Reichstag building, the seat of the German Bundestag in Berlin. / AP

At round the same time when The Greens were celebrating Baerbock’s nomination, the Christian-democratic CDU/CSU (number two in the aforementioned poll, with 21 percent) ended a painful internal power struggle.

Armin Laschet, the prime minister of the state of North Rhine-Westphalia, who encapsulates the technocratic Merkelian line of restraint and pragmatism, prevailed and will become the party’s candidate for the succession of Angela Merkel. This line is firmly rooted in the CDU/CSU tradition of ‘Keine Experimente!’ (‘No experiments!’), the adagium of founding father Konrad Adenauer: political and socio-economic adjustments should be pursued only, and steadily, if these are really necessary.

Yet, many German voters are longing for renewal, for a more vivid and dynamic political culture. No grey apparatchiks and cardinals, but young and open-minded politicians.

The Greens, aware of this slumbering sentiment (that has been stirred up by a series of corruption scandals involving the CDU/CSU and the wavering corona management of Merkel’s government) therefore decided to opt for 40-years old Annalena Baerbock. 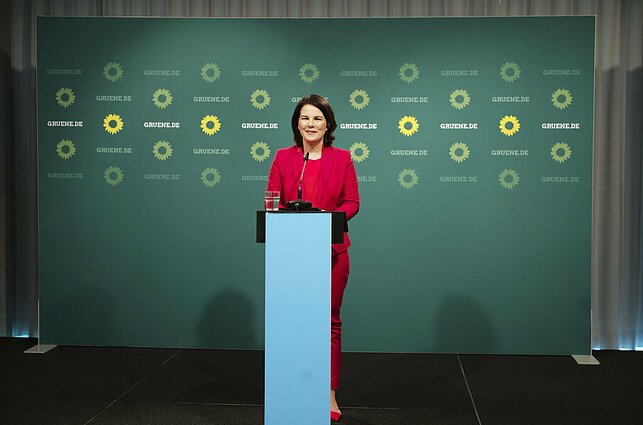 Her nomination could be considered as the (preliminary) end of an ideological quest. The Greens started, back in January 1980, as a rebellious political party that united all kind of ecological and anti-nuclear (nuclear energy and the stationing of nuclear missiles) movements and that opposed NATO membership.

Gradually, after German reunification in 1990 and under the leadership of the charismatic Joschka Fischer, the party began shaking off its ‘alternative lifestyle’ image and moving to the political centre. It tried to appeal to a broader, liberally-minded electorate.

Fischer (who, in 1985, during his inauguration as the environment minister of State Hessen, was wearing old sneakers) even acquired a reputation as Super-Realo.

While in his younger years, he had joined demonstrations against the American intervention in Vietnam, he defended the NATO bombing campaign on Yugoslavia in Spring 1999, as the foreign minister of the red-green government with Gerhard Schröder’s social democratic SPD.

At a conference in November 1999, it turned out that not all party members were sharing Fischer’s ‘super realism’, ie his willingness to amplify Germany’s emancipation on the world stage: he was hit by a paint capsule. 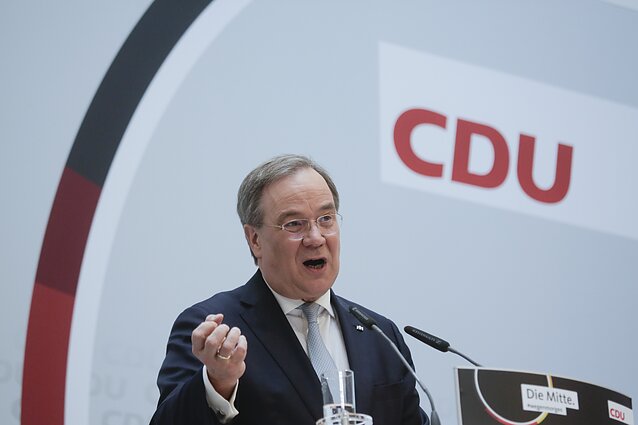 After the adventure of Rot-Grün ended in 2005, Fischer and Schröder went different ways. Schröder sold his soul to the Russian gas oligarchy and started working for Nord Stream AG, thus promoting the Baltic Sea gas pipeline that he had agreed upon with President Putin, while he still resided at the Kanzleramt. A career move for which then Estonian President Toomas Hendrik Ilves coined the verb ‘schröderizatsiya’.

Fischer took on the role of elder statesman and public intellectual, focusing on writing articles and books and fanning debates on international relations.

In that capacity, he has displayed a way more critical perception of Putin-Russia. Last year, in an interview with business magazine WirtschaftsWoche, Fischer admitted that “it was an enormous strategic mistake of the Federal Government to push through this German-Russian gas pipeline on its own, in spite of massive opposition coming from Europe”. Would Gerhard Schröder have read the article?

Since Fischer’s departure, the process of expanding the electoral base, of trying to attract new voters – highly-educated, secularised, living in Berlin and other major cities, pro-EU, IT-savvy and worried about climate change – has continued.

The Fundis, the old activist, pacifist guard, have been marginalized. Annalena Baerbock herself is a clear exponent of this tendency.

But Baerbock has added a new dimension to the ongoing political peregrination of Die Grünen – by expressing views on Russia, including the Nord Stream project, that resemble Joschka Fischer’s scepticism.

In a recent interview with the Frankfurter Allgemeine Zeitung, referring to the build-up of Russian forces near the border with Ukraine, she spoke of “increasing pressure on Russia”. In her view, Nord Stream is detrimental to German and EU energy security and should, therefore, no longer be endorsed by Berlin. Quite a difference with Armin Laschet, Baerbock’s main rival for taking over Chancellor Merkel’s job.

Laschet has repeatedly defended the notorious gas pipeline – and with much more enthusiasm than Merkel, who, being a former citizen of communist East Germany, at least has some natural intuition with dealings with Russia. 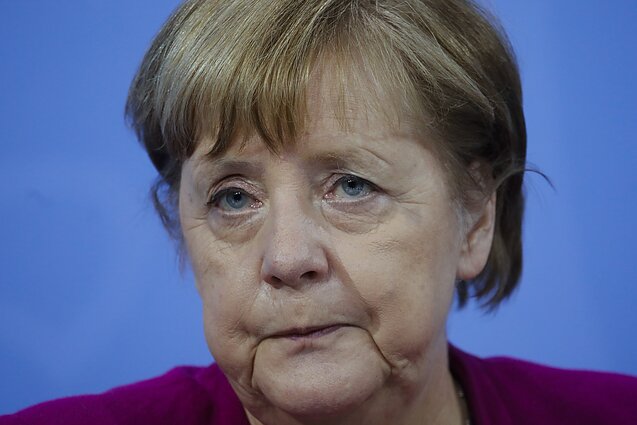 The first person, who disparaged Baerbock’s Russia contemplations was not Laschet, however.

On the same day the interview was published, Foreign Minister Maas said he rejects, what he called, ‘Konfrontationsgeschrei’ (‘confrontational screaming’) against Russia. A constructive dialogue and good neighbourly relations are needed, not a ‘permanent confrontation’ with Moscow.

Maas’ words seamlessly fit into the philosophy of Ostpolitik that his party, the SPD, has advocated since the late 1960s: by interweaving the Soviet Union into a reliable political-economic structure as tightly as possible, tensions could be minimized.

Although criticasters like British historian Timothy Garton Ash (in his magnum opus In Europe’s Name. Germany and the Divided Continent) have pointed out that Ostpolitik became too much of a sacred end in itself, instead of a means to mitigate the circumstances of the people, who had to endure communist rule, the SPD still considers itself as the treasurer of Ostpolitik – and wants to administer a fresh dose of the policy, now that tensions with Russia, the successor state of the Soviet Union, are on the rise again.

Other political parties smoothly implemented the concept when they joined the government: the CDU/CSU and the liberal FDP. The latter already tried to persuade Chancellor Adenauer to seek rapprochement to the East in the late 1950s, early 1960s. (It should be noted, though, that none of these three parties ever contemplated a de jure recognition of the Soviet annextion of Estonia, Latvia and Lithuania). 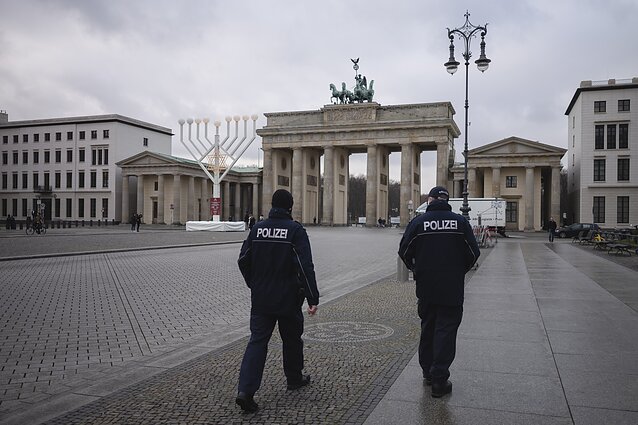 How does this concern The Greens? Very simple: if the party, after the forthcoming elections, will take on governmental responsibility or even lead a ruling coalition, it cannot ignore the Russia-related ideas and sentiments of its partners. The most likely scenarios are a coalition with the CDU/CSU, one with the SPD and FDP (Ampelkoalition, ‘traffic light coalition’) or one with the SPD and Die Linke, a far-left, socialist party that has never concealed its sympathy for Russia. Chances that the latter option will materialize are small.

As to the first option, if Baerbock becomes chancellor, the CDU/CSU will claim the Ministry of Foreign Affairs – and will try to maintain a firm hold on the energy sector and to defend Nord Stream. Maybe a ‘swap’ will be agreed upon: The Greens will get more sustainable energy, ie an acceleration of the green transformation process, the CDU/CSU will get the accomplishement of Nord Stream 2.

A similar synopsis could be applied to a coalition with the SPD (the custodian of Ostpolitik, including its economic ‘dimension’) and the FDP (the self-proclaimed custodian of ‘die Wirtschaft’, Big Business).

The only person, who might be able to stop Nord Stream 2 is US President Biden – though it is highly doubtful, whether he will inflict further, tougher sanctions to block the pipeline, since he is striving after an improvement of relations with Germany.

Reactions in Russia itself have been rather unperturbed so far. ‘Annalena is not an Angela’, daily Kommersant wrote, continuing that the Greens are undoubtedly aware that the combat of climate change is only possible in cooperation with Russia (and China). 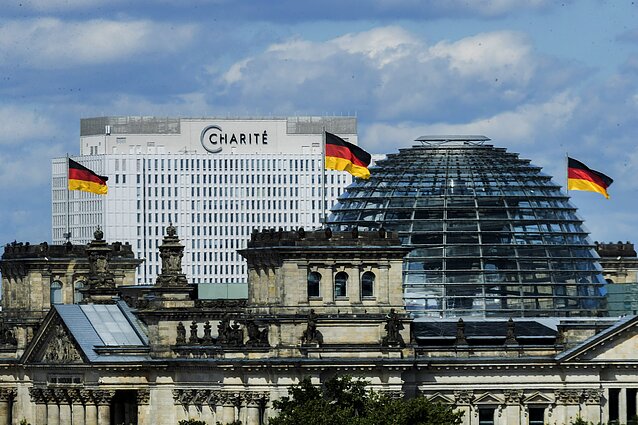 In general, German politics might be heading for more instability. The heydays of the two mighty Volksparteien (‘people’s parties’), the CDU/CSU and the SPD, who dominated the post-1945 political landscape, are over.

Germany might catch up with the process of political fragmentation that can already be perceived elsewhere in Europe. This is an another factor that Estonia, Latvia and Lithuania will have to take into account.

Although their diplomats in Berlin should definitively make efforts to get in touch with Annalena Baerbock and her staff, pinning too much hope on (fundamental changes after) a Green electoral victory in September is premature and unrealistic.

Jeroen Bult is a Dutch historian and publicist, specialised in the Baltic States and Germany. 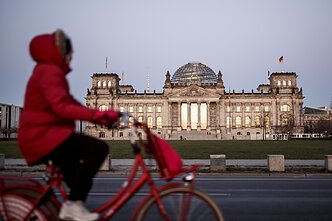 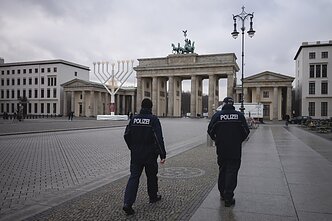 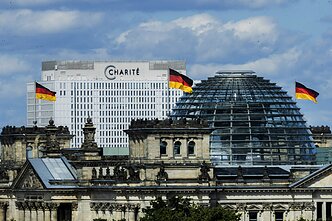 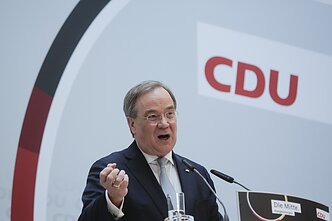 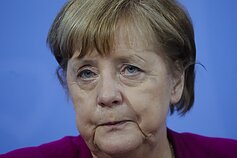 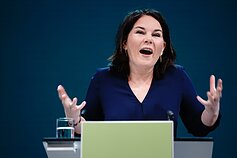 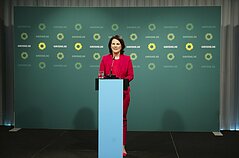 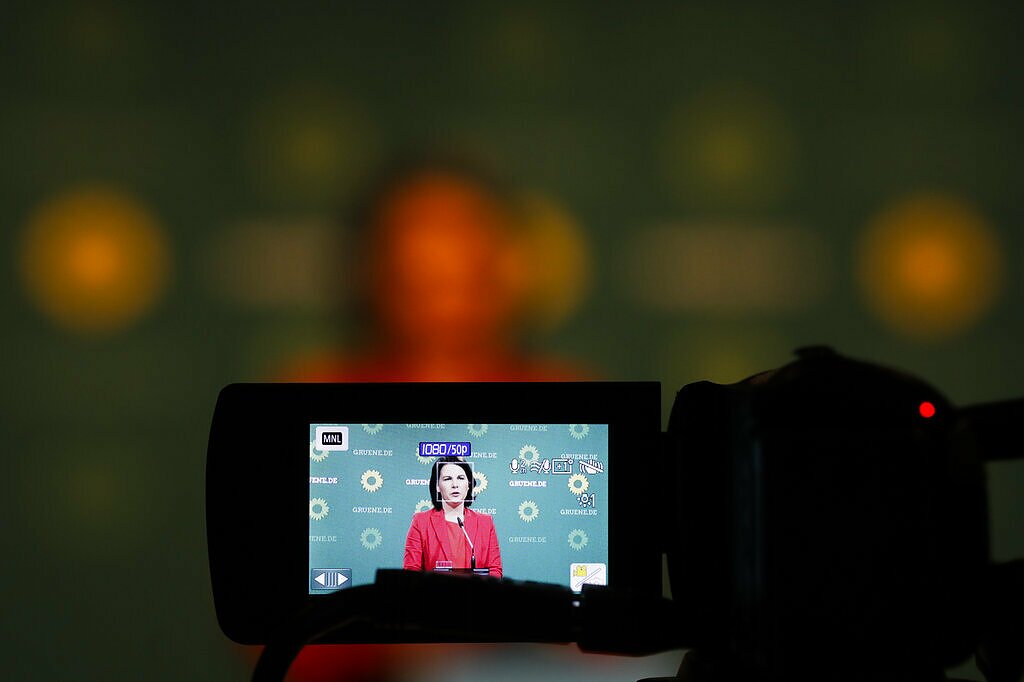 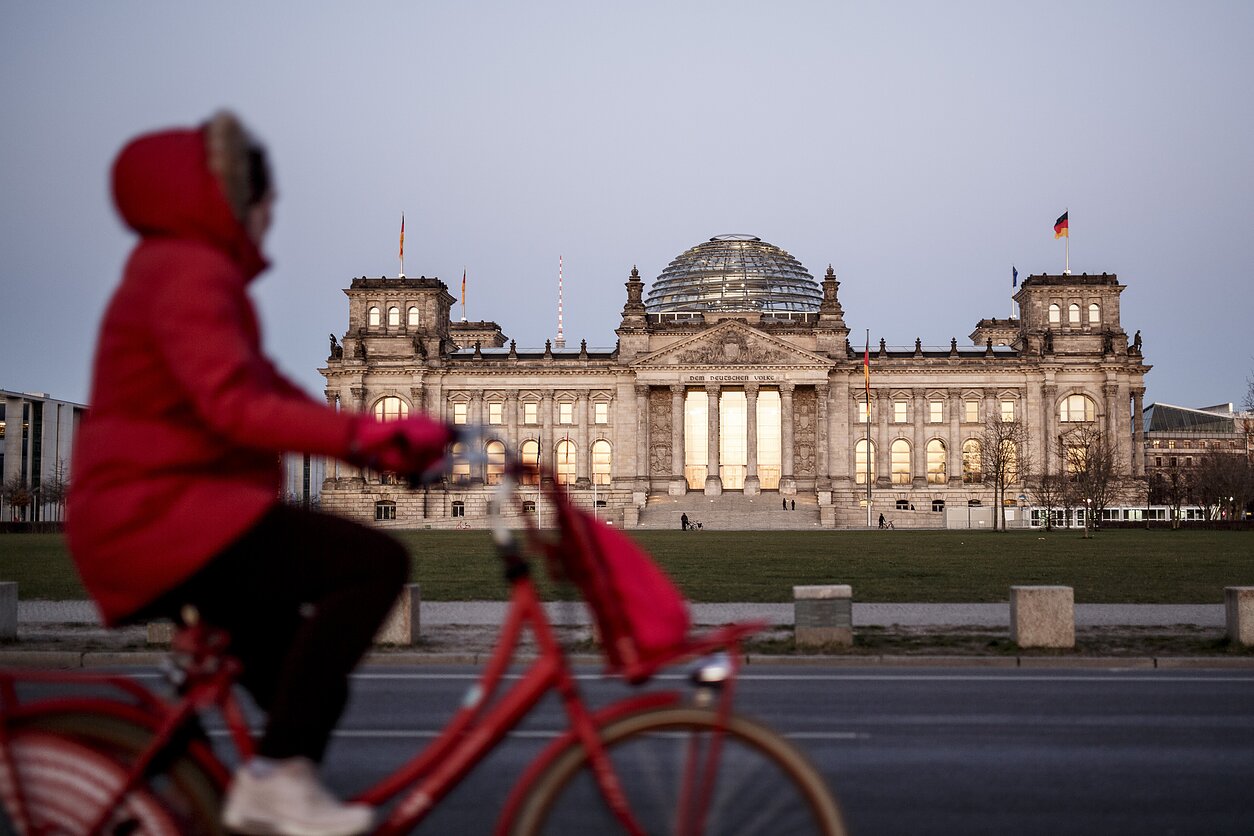 A woman rides past the Reichstag building, the seat of the German Bundestag in Berlin.
2 / 8AP 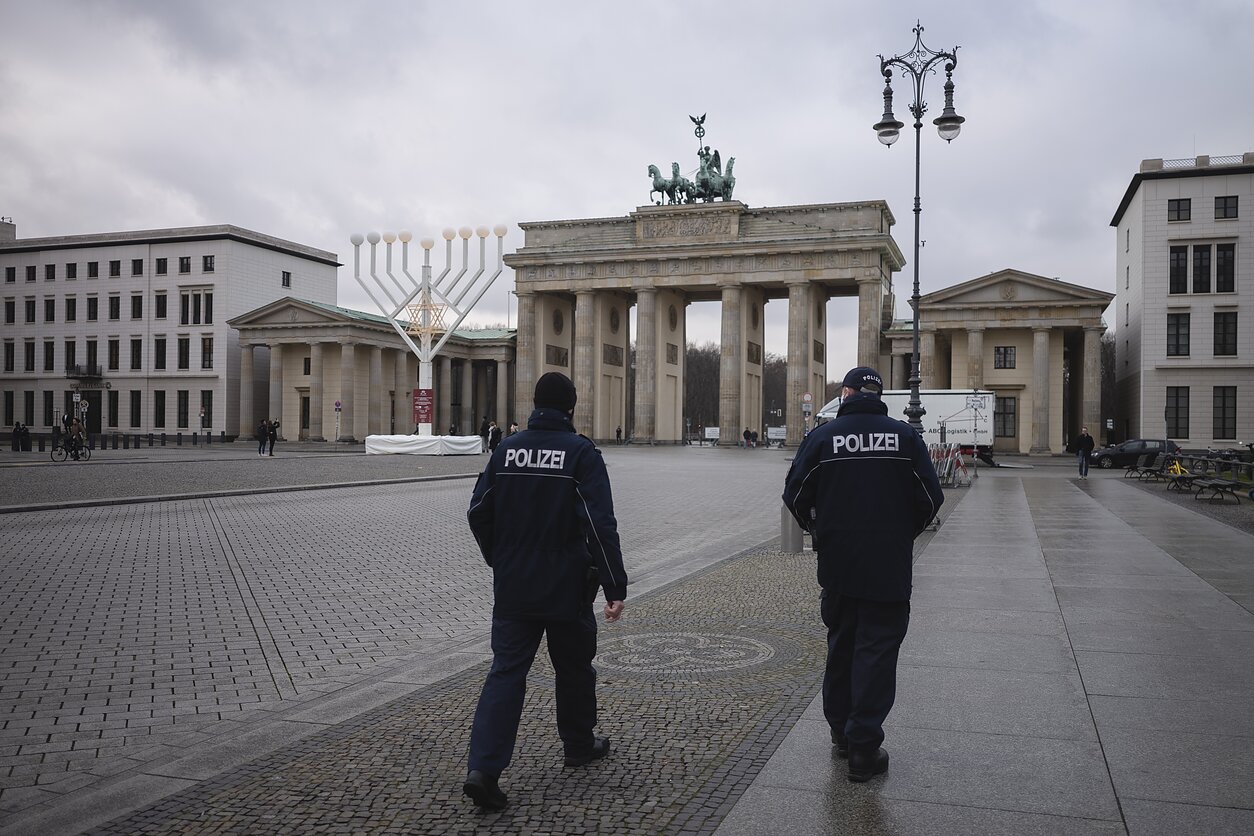 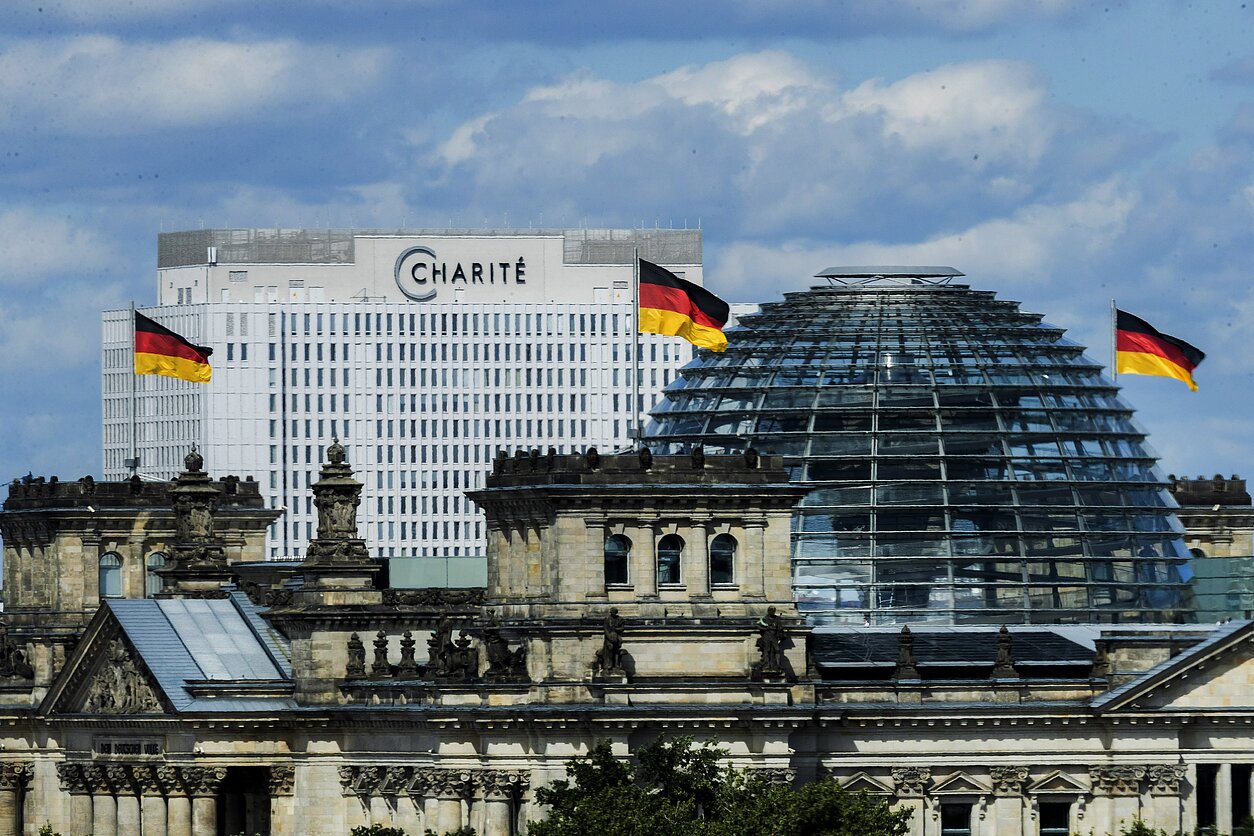 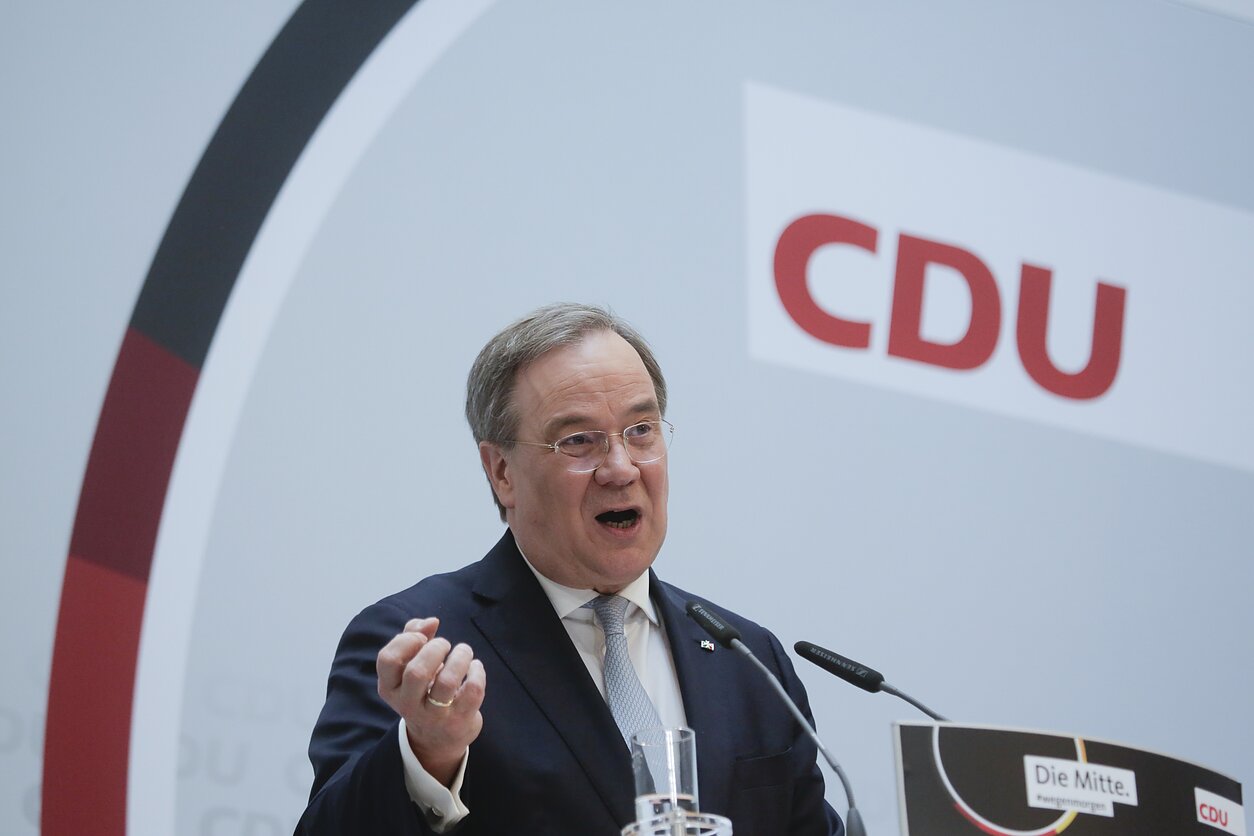 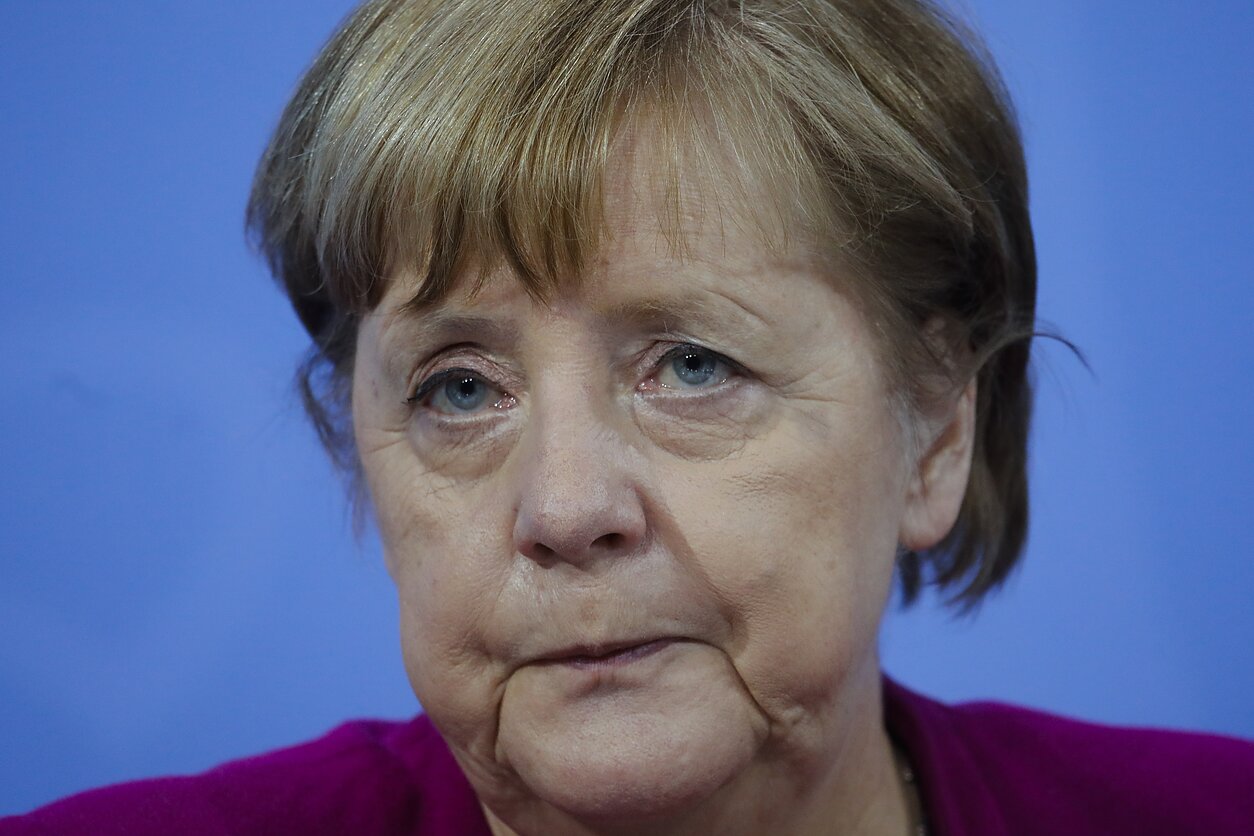 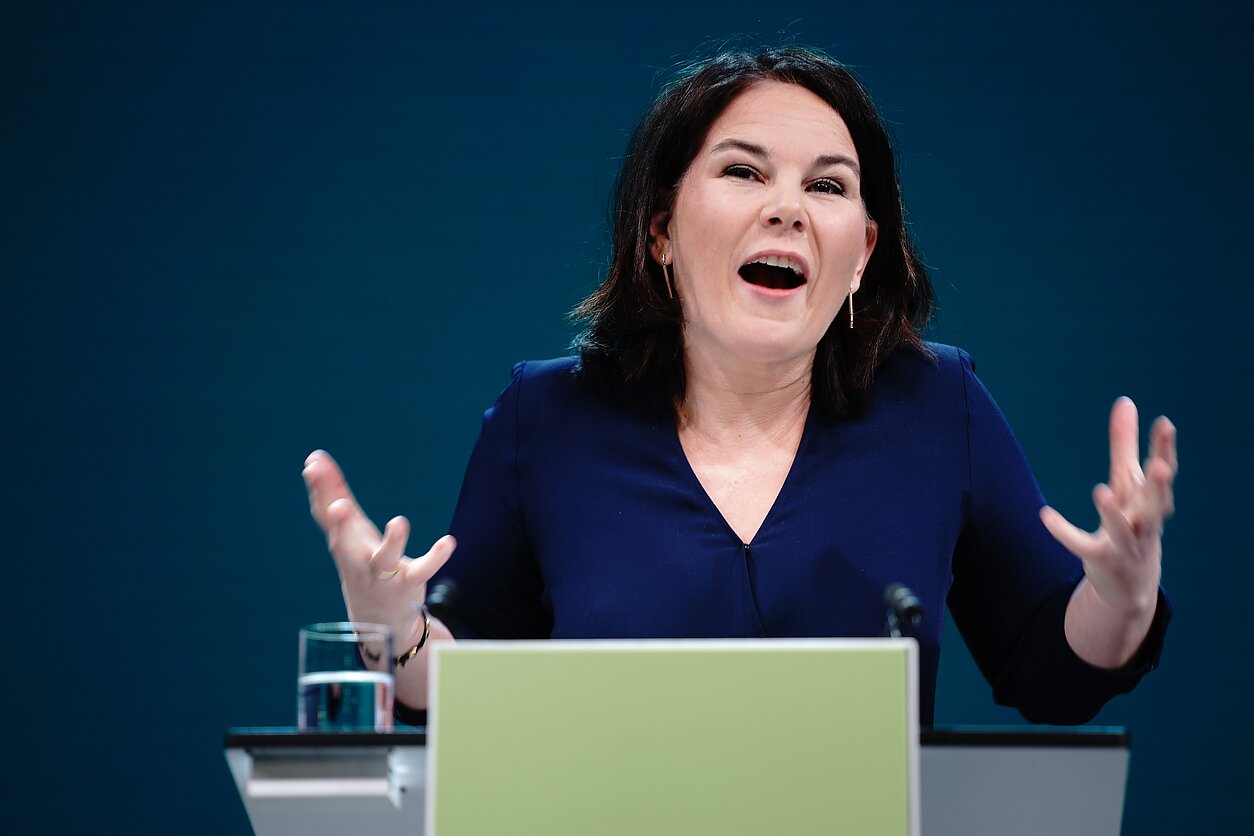 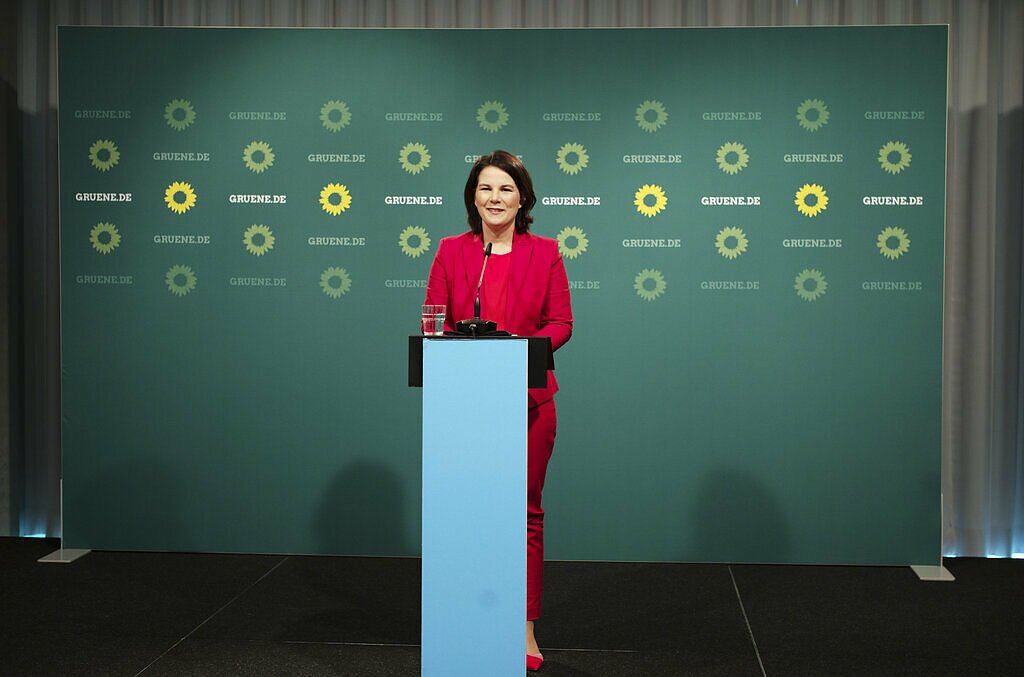