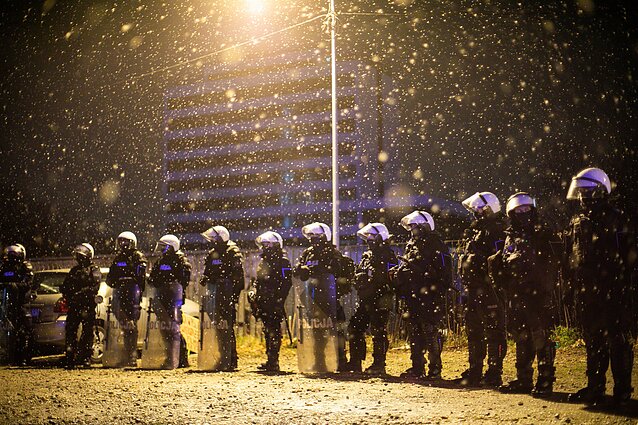 The victory of democracy in Eastern and Central Europe is by no means secure, argues Vladimir Tismăneanu, author and professor at the University of Maryland where he teaches courses on utopian radicalisms, ideologies, revolutions, totalitarianism, and democratic transition.

This interview conducted by Simona Merkinaitė is part of the project titled #Rethink1989 implemented by the Open Lithuania Fund (OLF) in partnership with Res Publica Foundation and Jan Nowak-Jezioranski College of Eastern Europe with the financial support through the European Union’s Europe for Citizens Programme. The publication originally appeared on the New Eastern Europe, partners of LRT English.

Hannah Arendt in her book On Revolution, inspired by the events in Hungary in 1956,differentiates between political and social revolution. The former is concerned with forms of governance and political freedom, while the latter is driven by mobilised, unsatisfied masses, demanding dignified social and economic lives.

Arendt went as far as to argue that even the fight for civil rights is not necessarily political, as they allow each to possess their individual rights instead of practicing it with others in the public realm. As such it cannot guarantee of long-term freedom, as people will engage in the public realm as long as their living conditions are unsatisfactory and will withdraw from politics as soon as they are satisfied.

Would it be fair to call what happened in 1989 a political revolution? Is it fair to dissect those two elements in 1989 and can the 'social' element explain the lack of political solidarity and dialogue? Or was 1989 something entirely different?

I think that Arendt would have looked into the disintegration (political, economic, and social) of the previous regime and would have delineated a more comprehensive approach than the one put forward in On Revolution. I mean one that would have included the moral component, the revolt of the plebeians, the defiance of the totalitarian Leviathan by the rising community of those whom Jan Patocka called the “shaken ones”.

As a matter of fact, Agnes Heller, the Hungarian philosopher, pointed out in her seminal writings on 1989 that those revolutions meant a re-appropriation by the citizens of national and popular sovereignty. In this regard, they resumed and rehabilitated the legacies that Arendt call the lost treasure of previous civic upheavals. Let’s remember that the title of Simon Schama’s masterful book about the French Revolution is Citizens. More clearly, under absolutist regimes, the individual is reduced to the condition of obedient subjects, devoid of autonomous subjectivity. These revolutions meant the recovery of the civic dimension by making human rights their first commandment. 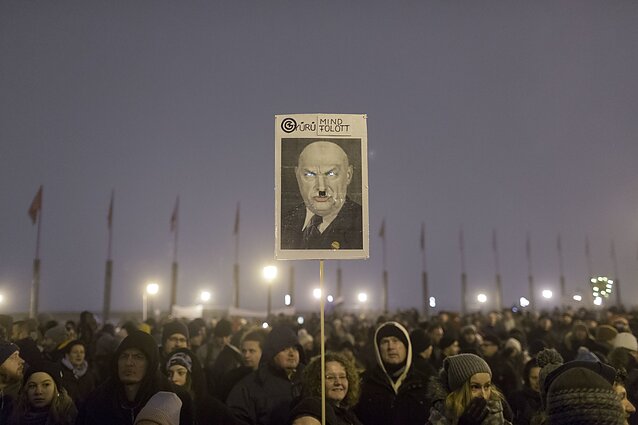 You once called 1989 a quest for the reinvention of politics. Do you think that this reinvention happened?

If I may engage in a self-criticism of sorts, I would say that those of us who emphasised the civic component of annus mirabilis, 1989 did underestimate the power of ethno-religious and other illiberal passions. Timothy Garton Ash, Leonidas Donskis, Václav Havel, Agnes Heller, Tony Judt, Leszek Kołakowski, Jacek Kuroń, Adam Michnik, Karol Modzelewski, to name a few of the influential thinkers and democratic activists, noticed the rise of these forces, but until 2010 or so the consensus was moderately optimistic.

The European Union and NATO expanded, liberal values and institutions seemed secure. Then the story turned increasingly dark. By 2015, Viktor Orbán turned the clock back to an authoritarian nationalism of Horthyist persuasion. Building walls against refugees became the most visible and disturbing expression of this ethnocentric politics of exclusion. Donald Trump and his chauvinist histrionics have further aggravated the situation.

Unfortunately, many of my rather pessimistic predictions from my 1998 book, Fantasies of Salvation: Democracy, Nationalism, and Myth in Post-Communist Europe, have seemed to come true. This seems to be the time of the right-wing Jacobins.

The authoritarian backslide was and is not inevitable. It is the result of several causes, among which the dissatisfaction with political elites regarded as alienated from the “true popular values”. Political artisans turned into oracular rabble-rousers know how to exploit widespread feeling of anxiety and rage. 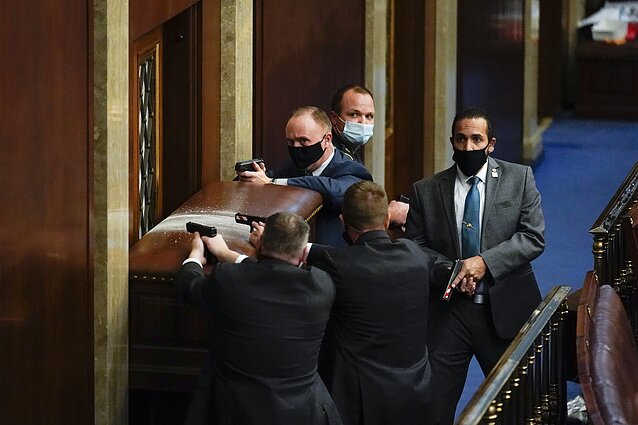 What are the key lessons for the democracies in the region we failed and what still needs to be taken from the dissident movement?

Three words, three values, three ideals: Trust, truth, and tolerance. Truth is not a plastic entity, definable and re-definable to accommodate partisan interests. It is a value based on verities of fact. Truth is precisely the opposite of the Bolshevik partiinost’, the conviction that there are “progressive” versus “reactionary” truths.

The confrontation with the past continues, and so does the need to affirm inclusive diversity as a fundamental value. We took our victories for granted and have discovered how resilient the authoritarian legacies can be. The dissident tradition spoke about anti-politics, but the issue is how to instil the needed vital energy into our liberal project. How can we articulate, especially under the ongoing cultural battles, with the counter-Enlightenment turning increasingly virulent, a re-Enlightenment strategy?

Memory has become part of the political battleground (including the memory of 1989), with different political and identity groups fighting over ownership of memory and the public spaces of memory. While the region is unique due to proximity of tragic and traumatic events over the past century, the fight over memory and its relation to the public seems to be accompanying the crisis of democracy globally. Why do you think that is? And how do we move forward from this polarisation, when some people are clearly resilient towards truth and differentiate between the political significance of memory and history? 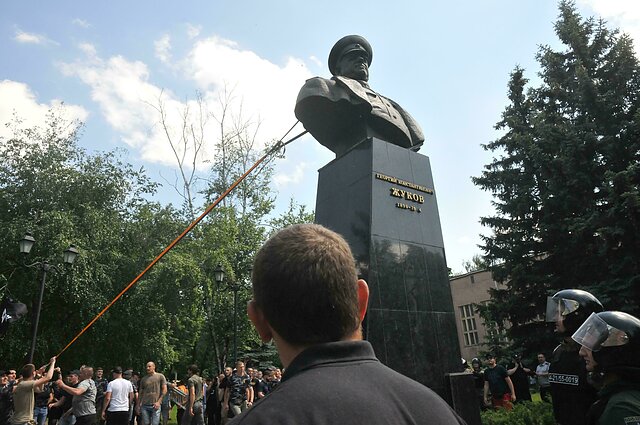 Soviet monument being pulled down in Ukraine. / AP

The politicisation of memory is a global phenomenon. From the oceans of historical facts, people select those that seem to justify self-serving narratives. Old political myths do not simply vanish, they keep haunting collective and individual memories. But this is not a universal fatality: we can use critical reasoning, verifiable epistemic points of reference to avoid the pitfalls of narcissistic stories of unique suffering and martyrdom. The quality we need to cultivate when we engage in this often painful undertaking od Vergagenheitsbewaltigung (coming to terms with the past) is empathy, and the work of mourning as one of truth-telling.

Is there a lesson from 1989 for the current generation and to the wider world beyond the region, where the rollback in democracy is happening, and what can help us preserve the future of democracies?

I have in mind two elements which Karl Popper, Ernest Gellner and Ralf Dahrendorf regarded as the conditions of liberty. First, there is no ironclad determinism in history, there is always room for preserving our humanity. This is the lesson of Camus in The Plague and Ionesco in The Rhynoceros. Second, their weapon is the lie. Ours is the truth.

Historically, as Arendt accurately thought, it may take some time, but truth turns out to be more powerful than its opposite. This will occur in China, too, I have no doubt. I can even imagine, one day, people flying to and from the “Liu Xiaobo International Airport” in Beijing.

In your seminal book, The Devil in History, you argue that while totalitarianism – as in communism and fascism – were rooted in radically different ideologies, the methods and the results are similar, namely, alienation, domination, control and extermination. Do you see those methods making a return to the current moment? There are numerous efforts to argue for the return of fascism. What is your take on it?

The other day I watched a segment of an online conversation with Raymond Aron conducted by two French political scientists in 1980-81. The great sociologist referred to his 1955 book, The Opium of the Intellectuals, and explained why he still regarded the utopian passions of the radical left (communism) as dangerous as those of the far right (fascism).

In my own writings, to a great extent indebted to Aron, I identify the Stalino-Fascist baroque as a self-styled ideological and political construct of our times. Think of Putin and Putinism, Orbán and Orbánism, Bolsonaro, Maduro, Trump; plus Duda and PiS. Not to speak about the eternal (God forbid!) Lukashenko.

Vladimir Tismaneanu is a professor in the Department of Government and Politics at the University of Maryland where he teaches courses on utopian radicalisms, ideologies, revolutions, totalitarianism in comparative perspective, and transitions from authoritarianism to democracy, In 2006, he served as chair of the Presidential Committee for the Analysis of the Communist Dictatorship in Romania.

Simona Merkinaitė is a Rethinking Europe progamme expert with Open Lithuania Foundation and is doing a PhD at Vilnius University. 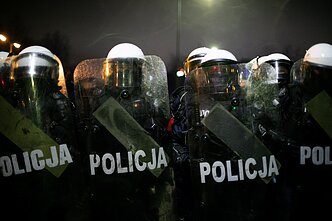 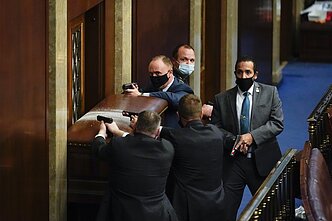 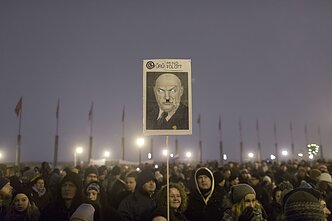 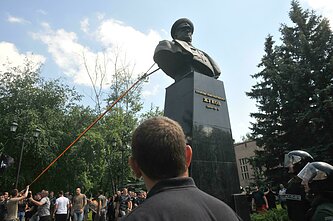 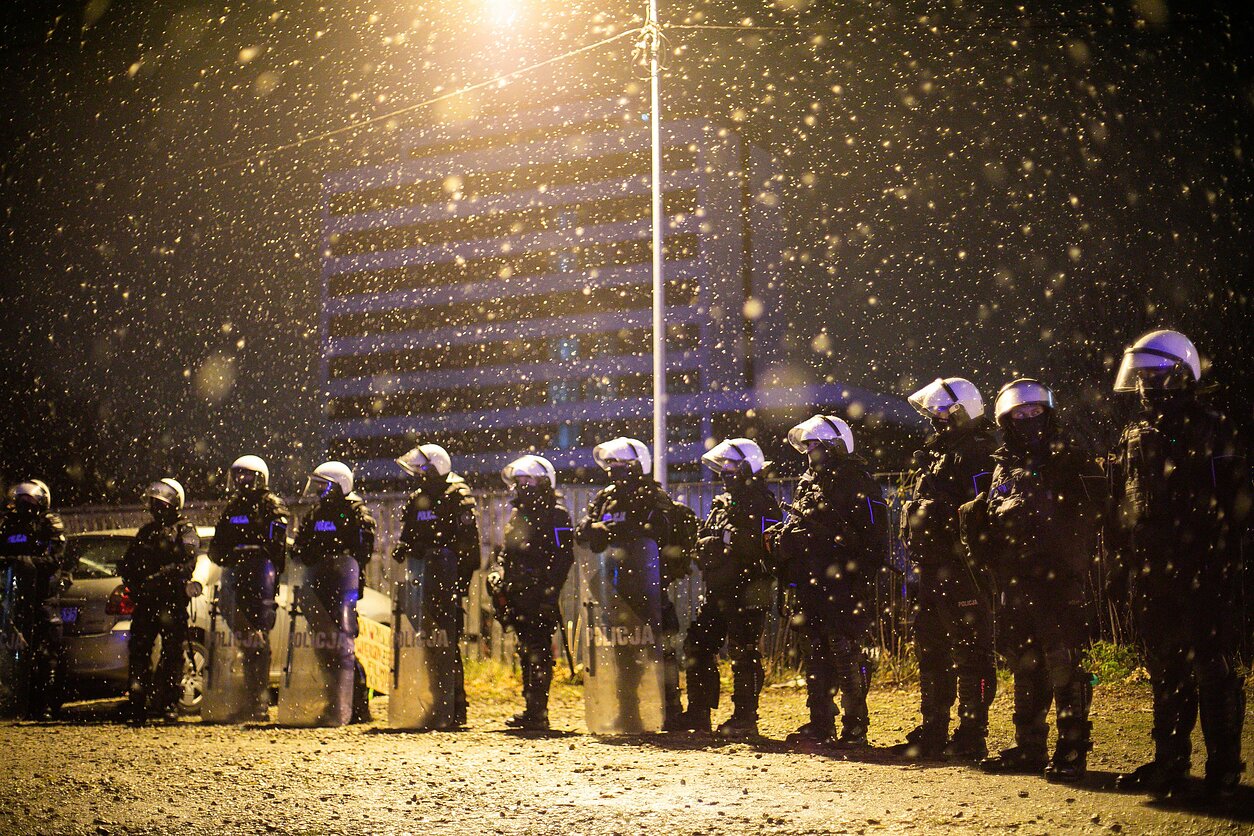 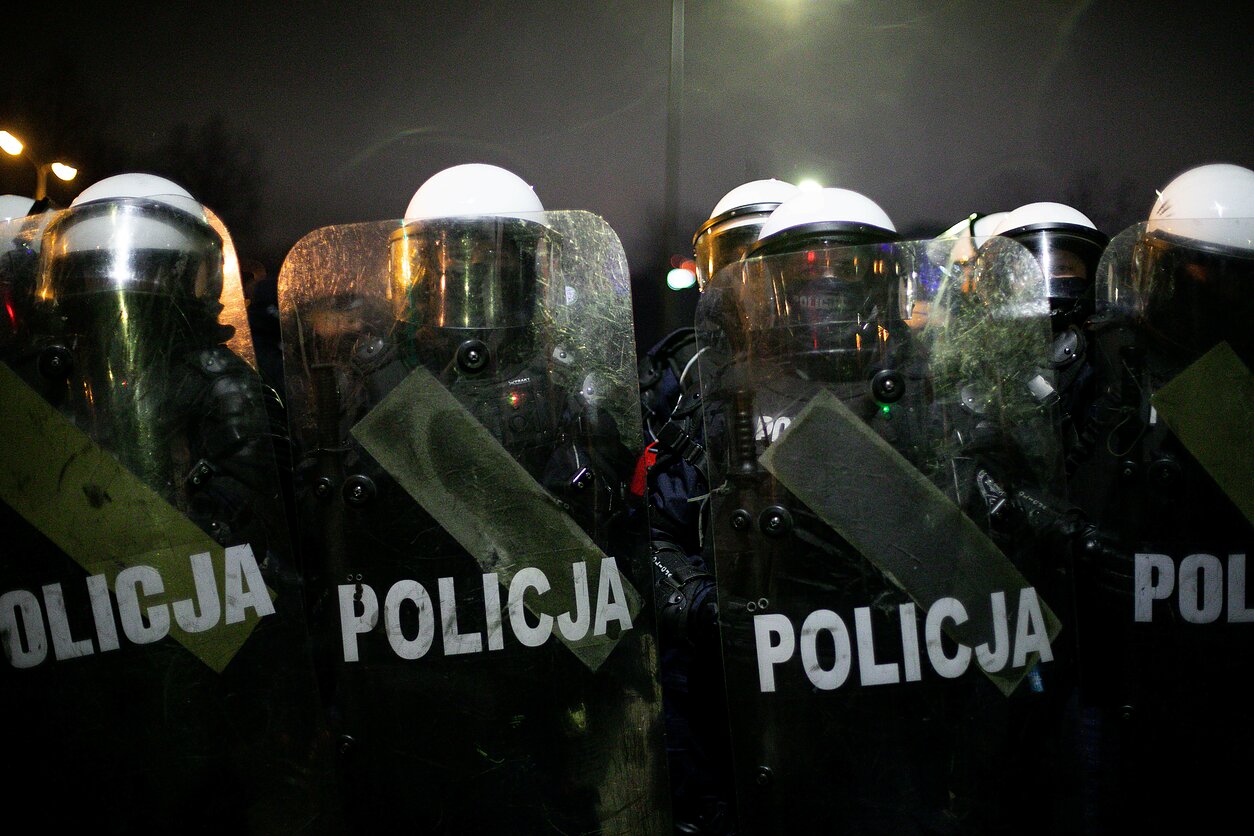 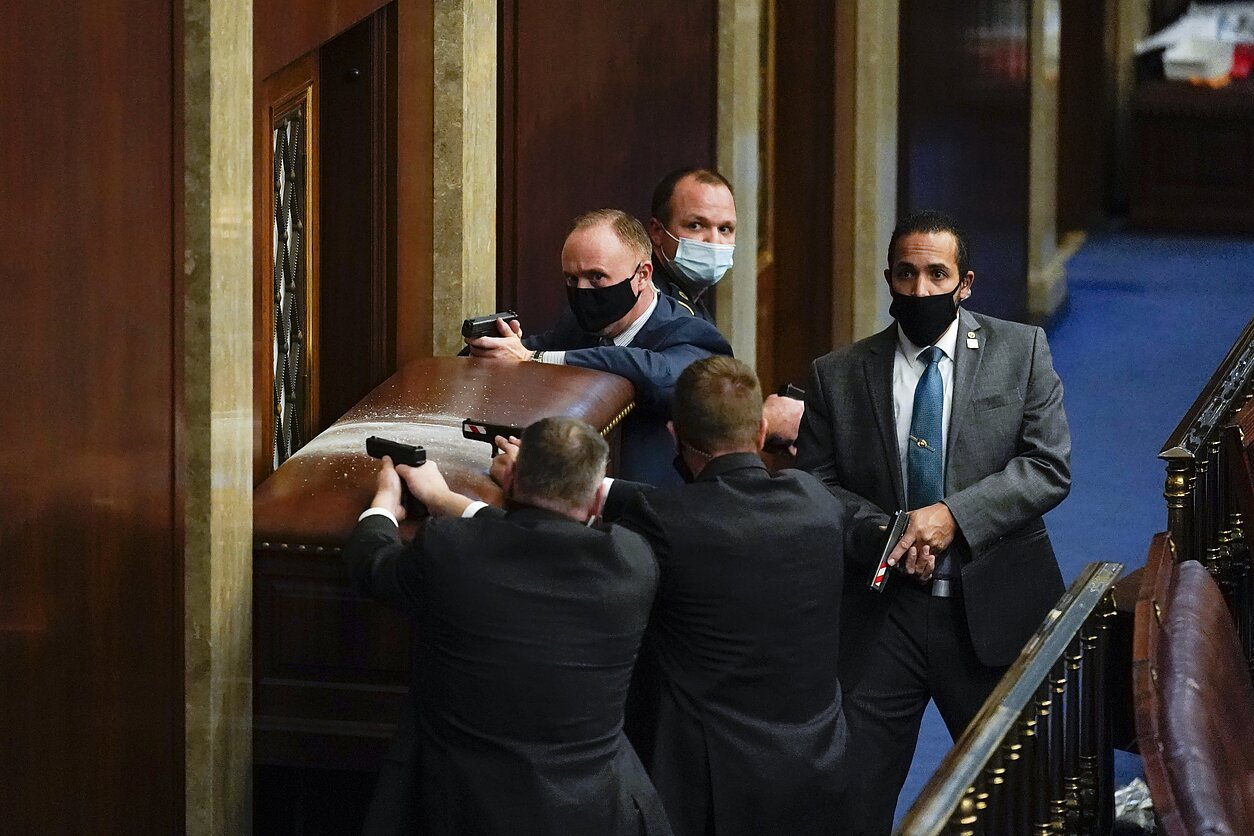 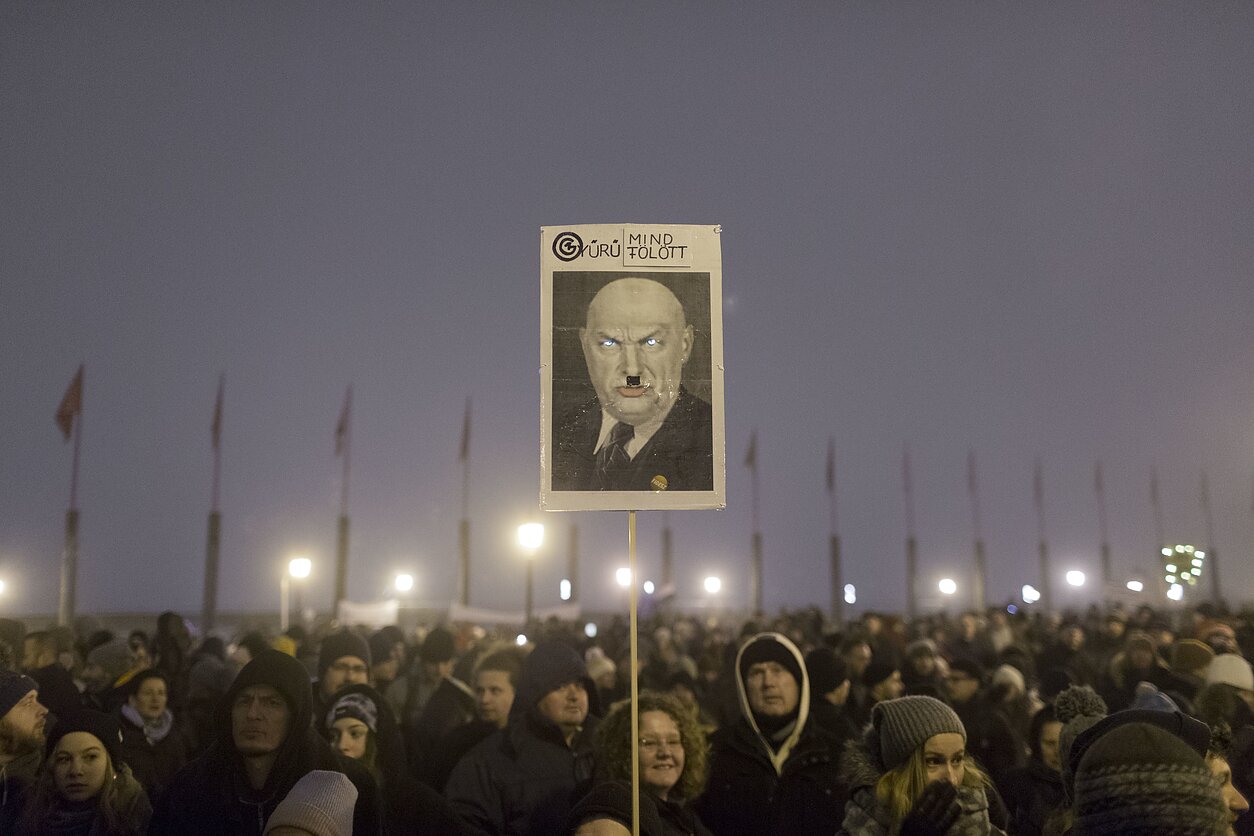 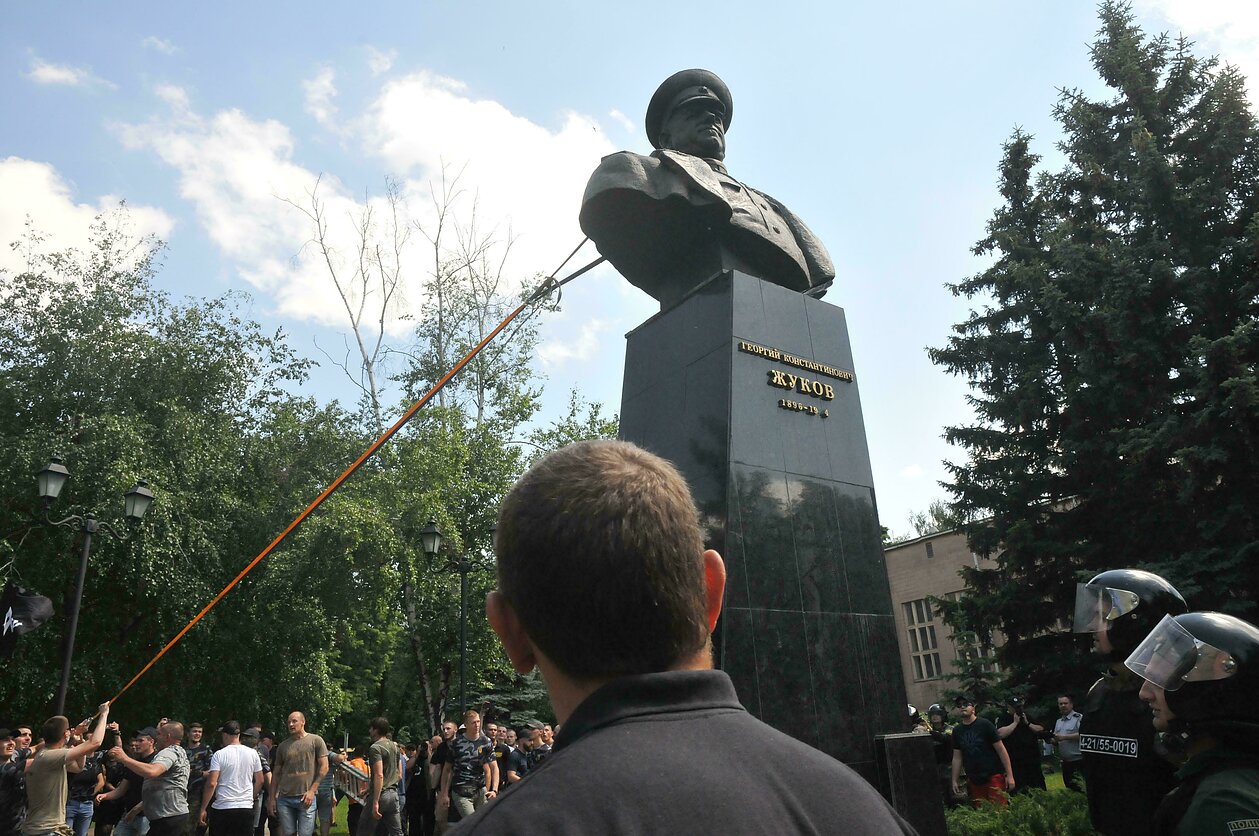 Soviet monument being pulled down in Ukraine.
5 / 5AP