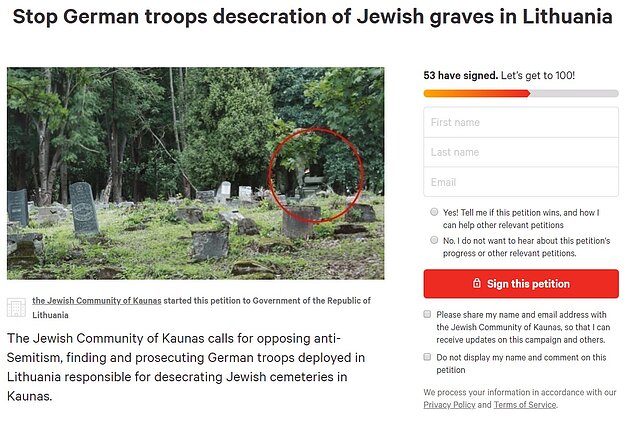 The petition on Change.org / Screengrab

Fake news have targeted NATO’s presence in Lithuania, the country’s Ministry of Defence tweeted on Friday.

A claim hosted on the popular petition website, Change.org, invites people to sign a petition to “Stop German troops desecration [sic] of Jewish graves in Lithuania”.

As of Friday, the petition has collected 39 signatures, and is still online.

NATO’s presence in the region has long been the target of fake news and disinformation.

Between May and July 2019, bots accounted for 55 percent of all Russian-language Twitter messages on NATO presence in the Baltic states and Poland.

The Russian-language bots were particularly interested in NATO military exercises that took place in the Baltic States and Poland during this period, EUvsDisinfo.eu, the EU's campaign to tackle Russian disinformation, reported earlier in September.