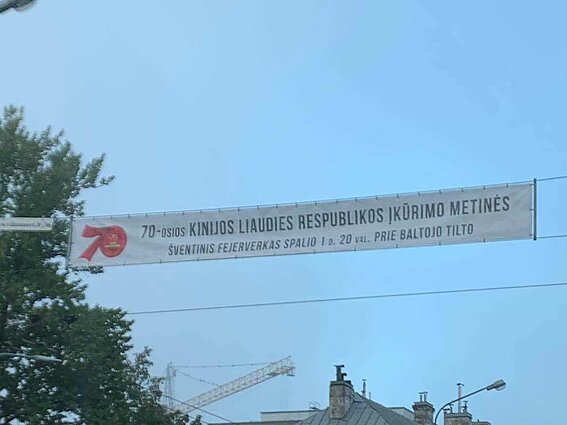 "70th anniversary of the establishment of People's Republic of China – celebratory fireworks on October 1, 20:00, next to the White Bridge" / Facebook screengrab

Vilnius will take down ads calling for an unsanctioned commemoration in the capital's centre to celebrate the 70th anniversary of the People's Republic of China.

The ad campaign aroused public anger, while Vilnius city representatives claimed they received no information on the celebratory event featuring fireworks, and will now remove the posters and billboards.

It’s a “geopolitical provocation and a test of boundaries,” Lithuanian MP Mantas Adomėna wrote on mocial media. “How much freedom are we willing to sell for Chinese economic influence?”

“It’s a communist tyranny which now has over a million of its citizens in concentration camps [...] what is there to celebrate?”

Another MP, Andrius Navickas, wrote that celebrating the establishment of People's Republic of China would be akin to celebrating Lithuania’s incorporation into the Soviet Union.

Vilnius Municipality's deputy administration director, Adomas Bužinskas, told LRT.lt no one has asked for a permission to host the event.

"We will take down the ads today, because [the public transport operator] failed to obtain approval [to put up the posters] from the municipality's foreign and public affairs divisions," he said.

"If no permission is obtained but we see preparations for a fireworks display [...] the municipality's Public Order Division, together with the Lithuanian police, will ensure that public order is respected and laws are not violated," he added.

“The ads are misleading, [because] they are inviting to an event near the White Bridge, which can form an impression that it’s a public event,” said Bužinskas. “But the Vilnius city administration has never issued a permit for the event, and we have received no enquiry from the organisers.”

Vilnius city administration is also unaware who organises the event, but according to LRT.lt sources, it’s most likely the Chinese embassy in Vilnius.

The staff of the Chinese embassy to Lithuania told BNS on Monday that they would look into the situation before answering the questions.

# Baltics and the World# Society# Politics