The Chinese ambassador in Vilnius was summoned to the Lithuanian Foreign Ministry on Monday over the embassy's possible involvement in a counter-protest in late August.

Ambassador Zhifei Shen was handed a note, “emphasizing that any actions by Chinese Embassy representatives geared against the constitutionally guaranteed democratic freedoms and interfering with public order are not acceptable and will not be tolerated,” the Lithuanian Foreign Ministry said in a statement.

The incident took place during a rally supporting Hong Kong protesters on August 23 in central Vilnius. Over a dozen pro-Beijing protesters turned up at the event with posters saying that Hong Kong and Tibet were “China's forever”.

The Lithuanian Foreign Ministry said last week it would look into whether the Chinese Embassy was behind the counter-protest. 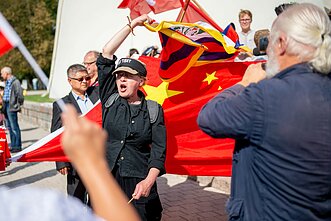