On May 22, 1948, Soviet authorities began Operation ‘Vesna’. Over the course of two days, some 40,000 people from Lithuania were deported to Siberia; around a quarter of them were children. Those who survived and are alive today, recall hunger and humiliations.

“Mum had a piece of smoked pork that she took it with her. Worms appeared during the trip [but when] she'd cut me a piece, I'd take out the worms and eat it,” Genovaitė Starkevičiūtė, who was fourteen in 1948, recalls. “But I wasn't hungry.”

Victims of the largest Soviet deportation operation in Lithuania were commemorated on Wednesday in Vilnius.

The deportee lists included the families of anti-Soviet partisans, their supporters, farmers who resisted collectivization. Historians studying the deportations say the most touching are children's stories.

“They were living for two weeks in tents constructed of fir branches and infested with parasites. One deportee herself narrates how they lit a bonfire and burned her beautiful cut hair,” says Ramunė Driaučiūnaitė of the Museum of Occupations and Freedom Fights.

About 11,000 children were deported along with their parents. Among them were Inesa Ulichina's seven-year-old grandmother and her two younger brothers. Their mother was pregnant with a child.

“My grandmother told me she had a full canister of fresh milk. She grabbed it and it was their only food during the trip. The milk, clearly, went sour. But still, they would drink it,” Inesa says.

Several years ago, she visited the site where her grandmother lived in Siberia. It is still hard for her to talk about the nine years spent in exile, Inesa says.

After Stalin's death, repressions eased in the Soviet Union and deportees were allowed to return home. But the return was not easy either, especially for children, Inesa says.

When her grandmother's family returned to Lithuania, they found their house occupied by a state institution. For some time, they had to sleep in a barn.

“It was like starting a life from scratch,” Inesa says.

According to historians, operation ‘Vesna’ involved 40,000 Soviet soldiers and officials, as many as the deportees. 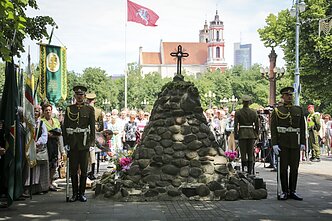