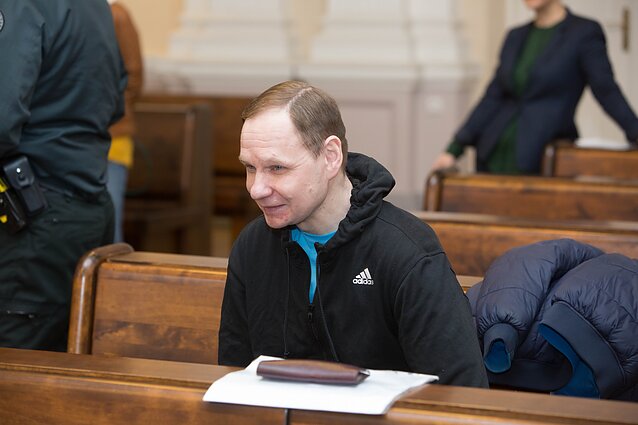 Konstantin Mikhailov, a former member of a Soviet special police unit who is serving a life sentence in Lithuania for his role in the killings of Lithuanian border guards and police officers at Medininkai border checkpoint in 1991, has appealed to the European Court of Human Rights (ECHR).

The Lithuanian government's representative to the ECHR says the Strasbourg court will look into whether the irreducible life sentence handed down to Mikhailov complies with the European Convention on Human Rights.

Mikhailov also complains that the criminal charges against him were amended at the appeals stage, which he says breached his right to be informed promptly, that courts dismissed most of his motions, that public officials and politicians made public statements alleging that he was guilty and had to be convicted, and that his conviction was largely based on testimonies by anonymous witnesses.

The court will also look at whether the convention was violated when the charges were amended from murder to crimes against humanity at the appeal stage.

Mikhailov, a Latvian citizen, was detained by Latvian law-enforcement bodies in November 2007 under a European arrest warrant issued by Lithuania. He was held in detention in Lithuania from January 2008. It emerged later that Mikhailov had also been granted Russian citizenship.

According to the case-file, Mikhailov, as a member of the Soviet Interior Ministry's special police unit OMON and acting as part of a squad organized by Cheslav Mlynik, together with other members of the squad, Andrei Laktionov and Alexander Ryzhov, intentionally killed Lithuanian customs and police officers Antanas Musteikis, Stanislavas Orlavičius, Ričardas Rabavičius, Algirdas Kazlauskas, Juozas Janonis, Algimantas Juozakas and Mindaugas Balavakas, and attempted to kill Tomas Šernas.

In 2017, the Lithuanian Supreme Court upheld judgments by lower courts that the Medininkai massacre was part of the Soviet policy aimed at keeping Lithuania within the Soviet Union. The Supreme Court's judgement is final and not subject to appeal.

Mikhailov was sentenced to life in prison. He was also ordered to pay €653,850 in damages to the state.