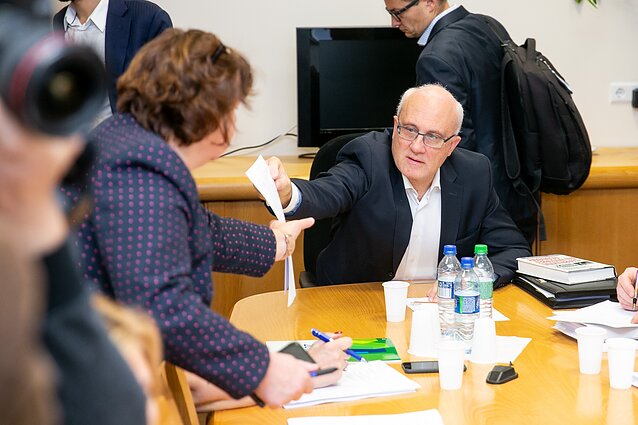 The actions of Scandinavian-owned banks was a decisive factor in the 2009-2010 economic crisis in Lithuania, while the government's refusal to borrow from international institutions exacerbated its effects, claims a controversial report approved by a parliamentary committee of Friday.

The investigation, headed by the chairman of the parliamentary Committee on Budget and Finance Stasys Jakeliūnas, looked into the causes of the 2009-2010 economic crisis.

It puts the blame for the severity of the downturn that followed the global financial crisis on Scandinavian banks.

Jakeliūnas' controversial investigation, decried by the opposition as politically motivated, looked into the actions of the then conservative-led government and Scandinavian-owned banks, including Swedbank and SEB, alleging that they exacerbated the economic crisis which saw Lithuania's GDP drop almost 15 percent in 2009.

Presenting the investigation to the committee on Friday, Jakeliūnas said that private banks had engaged in profligate lending in the run up to the crisis and then suddenly withdrew capital worth some €9 billion from Lithuania.

“That was a decisive factor. Swedish banks were dealing with their problems in Sweden,” Jakeliūnas said.

The report also notes that the government had engaged in deficit spending before the 2009 crisis, which left Lithuania exposed and unprepared to pursue counter-cyclical policies. However, Jakeliūnas insists that it was a secondary factor and that even sound management of public finances could not have prevented the crisis.

“Even if Lithuania had accumulated a 10-billion-litas (€2.9bn) reserve, 10 percent of the GDP, the crisis would have happened anyway, albeit with milder effects,” Jakeliūnas said on Friday.

The committee also heard that the 2008 parliamentary elections was a factor and prevented the government from adequately preparing for the blow.

In the report, Jakeliūnas also claims that the Lithuanian government was borrowing from commercial lenders instead of trying to secure cheaper loans from international institutions like the IMF. This way, he said, Lithuania could have overpaid €2 billion.

“Interest rates charged by commercial banks were higher at the time, 9 or even 12 percent, but there were other options. We are arguing that the governments could have borrowed from international institutions,” Jakeliūnas said.

He noted that Lithuania's conservative government decided not to seek cheaper IMF loans because it was so advised by President Dalia Grybauskaitė, who was at the time the European Commissioner for Financial Programming and the Budget.

“I can't give you an exact quote, but she [Grybauskaitė] insisted that Lithuania was not impotent and could deal with its public finances without any help. When a person of authority – and she was in the European Commission then – says something like that, any government would find it hard to turn for help. There were diplomatic problems,” according to Jakeliūnas.

He said this point was corroborated by the then Prime Minister Andrius Kubilius.

“I asked Andrius Kubilius if the president's public statement had an effect and the former prime minister replied that it did,” Jakeliūnas said.

The Committee on Budget and Finance has been granted the powers of a special commission. However, its opposition members, conservatives Mykolas Majauskas and Andrius Kubilius, refused to participate, claiming the investigation is politically motivated. The report was endorsed with votes from MPs with the ruling Farmers and Greens Union and their coalition partners.

The report is to be submitted to the Lithuanian parliament, Seimas, by October.

The committee has yet to hold hearings about the role of the Bank of Lithuania in regulating commercial banks during the crisis. Jakeliūnas has previously said that banks may have overcharged interest on litas-denominated loans which were significantly more expensive than borrowing in the euro.