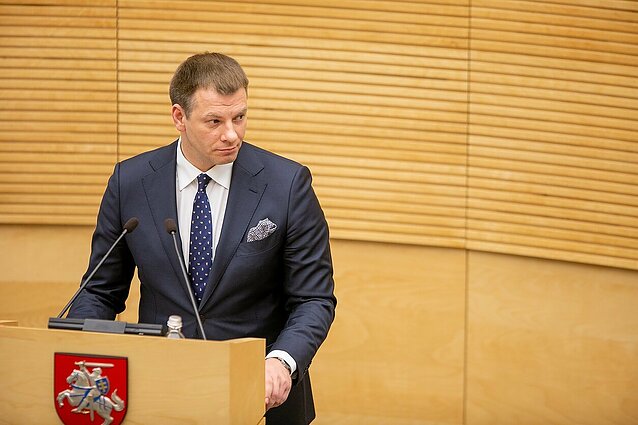 “If we look at the period when these stories surface, there are certain coincidences. These topics emerged in the run-up to elections in Latvia, in Estonia, in Sweden and in Lithuania,” the minister told members of the Liberal Movement's political group in the parliament, Seimas.

He suggested that the timing of media stories about alleged money laundering through Danske Bank, Swedbank and Nordea accounts “may be a coincidence, or it may not be a coincidence”.

The minister also noted that the Baltic states had very different banking sectors and level of money laundering risks were not the same.

“The situation in Lithuania is not comparable to that in Estonia and Latvia. (...) For example, deposits of non-residents used to account for almost 50 percent of bank deposits in Latvia, a third in Estonia and 2-3 percent in Lithuania. But this was the situation a decade ago, when prevention requirements were different from the current ones," he said.

Šapoka told the MPs that officials from various Lithuanian agencies met recently “to discuss strategic communication” about the banking sector.

“We should be very careful in our communication,” he said.

The latest money laundering scandal was triggered by suspicions that the Estonian branch of Danske Bank might have funneled around €200 billion over a period of several years.

The scandal escalated in February when suspicions fell on Sweden's Swedbank and Finland's Nordea. The Organized Crime and Corruption Reporting Project (OCCRP) has reported about a money laundering scheme centred around Lithuania's now-defunct Ūkio Bankas.

Lithuania elected new municipal councils in March and will hold presidential and European Parliament elections in May.