Cards and card games in the Grand Duchy of Lithuania 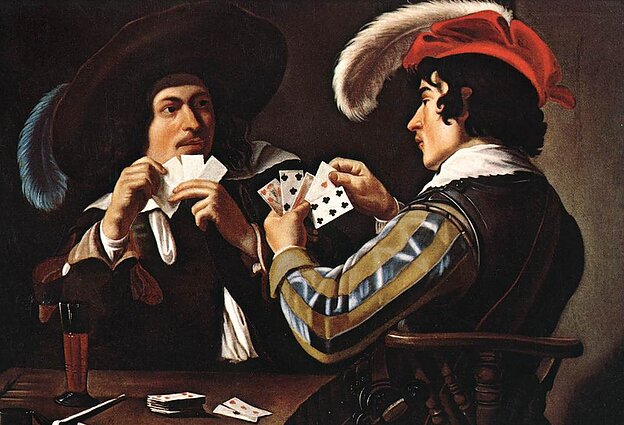 Card games came to Lithuania from Germany via Poland and from the very beginning were loved by kings and condemned by moralists. The Polish-Lithuanian decks had all-male face cards and were slow to admit the queen.

Mateusz Ozięblowski, a nobleman owner of an estate in Gelgaudiškis, had an unpleasant case before him on June 10, 1597, that he had to settle.

It involved his two servants, Jan Szymanowski and Jarosz Stefanowski, and a game of cards while Ozięblowski had been away.

Jarosz was lucky enough to win one Polish złoty from Jan. The latter then tried to persuade Jarosz to continue playing, but he left and went to see another resident of the town, Petras Kaklius, whom he asked for a beer. Petras refused, since Jarosz still owed him money for the beer he drank earlier, but Jarosz stayed there because he expected Petras to change his mind.

It was there that Jan caught up with Jarosz and tried to persuade him to have another go at cards. The two men started quarrelling and, after exchanging some harsh words, Jan lost his temper and clubbed Jarosz to death. He fled the scene, but was captured just a few miles away.

The patrimonial court sentenced him to death. The seemingly innocent game of cards would sometimes ignite ruction and lead to misfortune.

Read more: Dwarfs and jesters at the court of Lithuania's Vytautas the Great 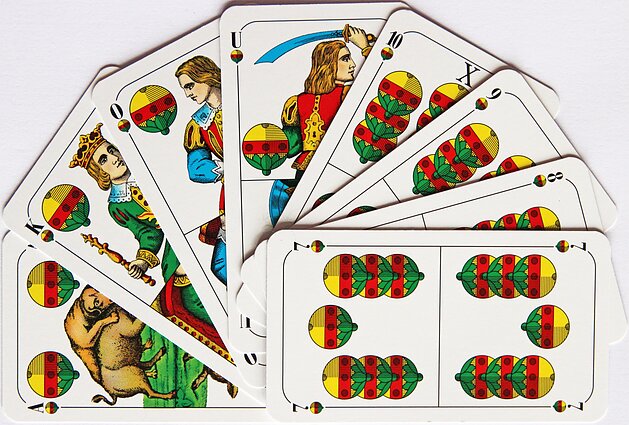 The suit of Bells from a Bavarian pattern pack / Wikipedia

The history of cards

The earliest history of the modern playing cards is somewhat mysterious, as cards usually carry images of symbols. Scholars have been arguing for more than a century about the origins of cards and how they gained popularity in Europe.

Playing cards first entered Europe in the 14th century at the latest. Earliest historical sources referring to cards are from northern Italy and from cities of southern Germany. In the Middle Ages, cards were drawn by hand, just like manuscripts, which made them unaffordable to many people.

Still, it was in the Middle Ages that cards became popular with burghers, only later catching the attention of the educated strata. This explains why there are so few documents about cards from the 14th century. The documents that exist mostly concern bans and chiding against those engaging in card games. 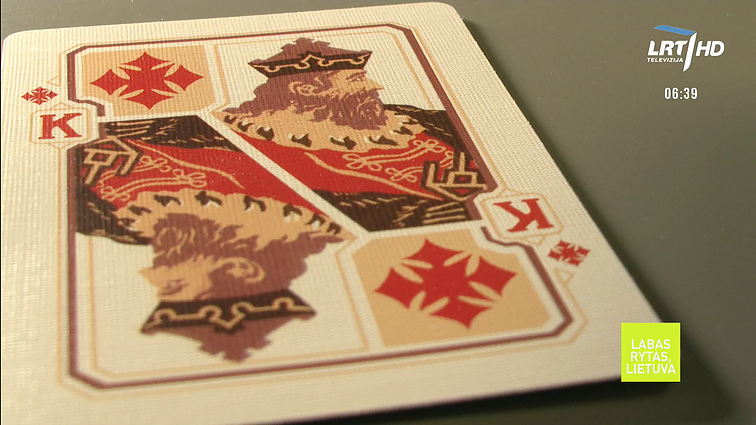 As different card games became ever more popular, the 15th century saw the emergence of professional cards makers and engravers whose products were sometimes veritable works of art. Many aristocrats got obsessed with card games, while peasants took to them at the beginning of the 17th century.

Cards most probably reached Lithuania from Germany and through Poland. The theory is supported by the fact that the most widely used decks in the 15th century consisted of 48 cards, just like in Germany. Cards often featured images from everyday life, some of them comic and even vulgar.

The first mention of cards in Poland dates back to 1452 in a document issued by the University of Krakow that banned the game. First card makers (kartenmacher, kartenmaler, cartarius, chartarius) are known to have worked in Krakow at the turn of the 16th century. It is around that time that card games became popular among city dwellers and aristocrats.

According to one documented story, Sigismund I the Old, then still the future Grand Duke of Lithuania and King of Poland (1506–1548), was playing cards in the evenings on his way from Silesia to Krakow in 1501.

Read more: What can we learn from Lithuania's very first census of 1790? 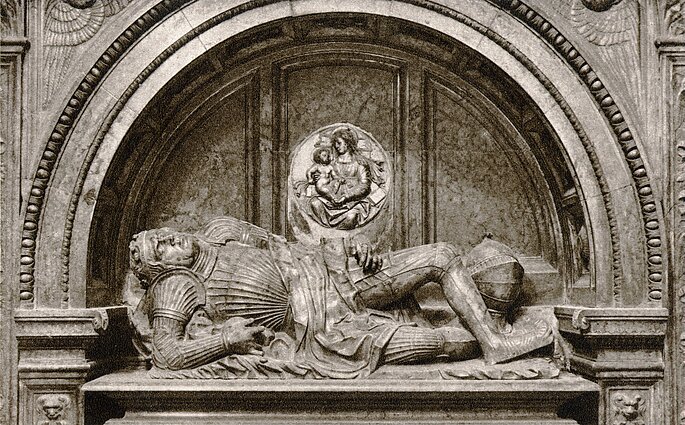 Sigismund I the Old's tomb in Krakow / Wikipedia

Thomas Murner, a Franciscan monk, used images of cards to illustrate his book Logica memorativa, a compilation of exercises for developing logical thinking and memory, that was published in Krakow in 1507.

It was about the time that cards reached Lithuania and became popular among the nobility. A 1549 letter by Mikołaj Radziwiłł the Black provides one of the earliest mentions of cards in Lithuania: the nobleman uses condemning words when he writes of card addicts seeking to become state officials.

It is very likely that cards from Poland were used in 16th century Lithuania, although the first packs most probably reached the country from Germany.

Polish and German cards featured different images. Scarce examples of the cards made in Poland usually bear military images and pictures depicting the life of the nobility. German-made cards very often feature scenes from urban and rural life that never appear on cards from Poland. In addition, German-made cards are usually more sophisticated in the artistic sense.

Lithuanians would sometimes borrow card images or their details to decorate household items. One such example is a furnace tile found in the Palace of the Grand Dukes in Vilnius depicting a comic scene with two rabbits roasting a hunter over a fire. The six of spades from a 16th century pack made by Erhard Schön, the card maker from Nuremberg, carries an identical image.

The evolution of card design and the queen

Cards used in 16th century Lithuania were different from the ones used now. The meanings of symbols and the ranks of cards, however, remained more or less the same over the centuries.

Read more: When did potatoes come to Lithuania? 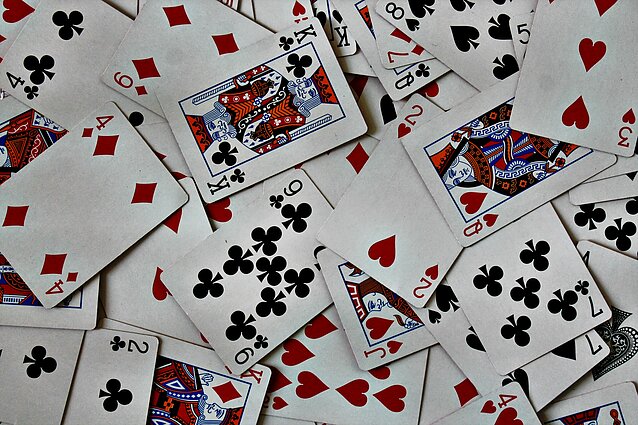 For many years, the suit symbols were red (hearts and diamonds) and green (clubs and spades) rather than red and black we are used to now. Until the late 16th century, different suit symbols were often used in a number of European countries, but the aforementioned four finally proved the most popular of all.

It was often difficult to tell apart the kings and the two types of jacks, because all of them were male. Kings were depicted wearing crowns or on horseback. The only difference between the “higher” and “lower” jacks was the location of the symbol on a card: the “higher” jack had its symbol on the upper half and the “lower” jack’s symbol was on the lower part of the card.

The composition of the pack of cards changed in the late 17th century alongside the images printed on cards.

The French-style cards and other French games were becoming popular in the Polish and Lithuanian Commonwealth at that time. The French-style pack featured a queen instead of one of the jacks.

In addition to that, France began producing cards in manufactures in the second half of the 17th century in response to the growing demand. Consequently, the green cards (clubs and spades) gradually turned into black, because the black dye was more readily available. 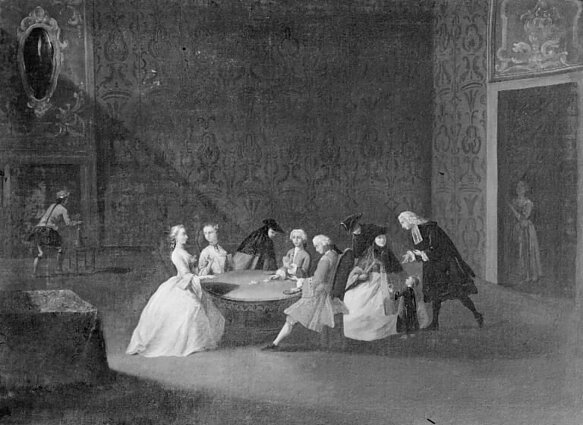 There are no surviving examples of cards made by the card shop that operated in 1695 in Vilnius or produced at card manufactures near Grodno in the late 18th century. Despite that, a glance at Polish cards of the period suggests that the French innovations had little or no impact on card-making traditions in the Polish-Lithuanian Commonwealth: local packs still featured two jacks and no queens, with clubs and spades still in green.

Many card games from the period between the 15th and the 18th centuries are known only by their names. The names were usually uniform across Europe, although rules could differ substantially. This is why we now know the rules of only a few card games from that time.

Royal courts were the trend-setters for card players from the late 16th century until the late 18th century. Surviving documents from the period indicate that almost all rulers of the Polish-Lithuanian Commonwealth of that time were passionate card players.

Picket and Flux were among the oldest card games here, known from the 16th century. Basseta became popular in the 17th century, while Pharaoh apparently was the favourite game of Ignacy Massalski, a bishop of Vilnius known for having constantly lost large sums of money. 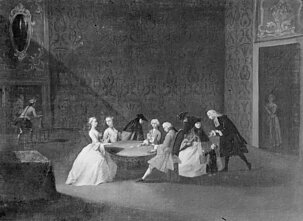 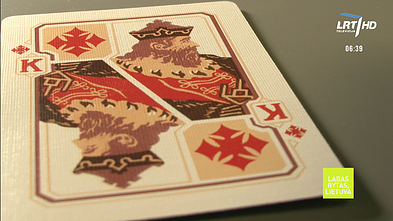 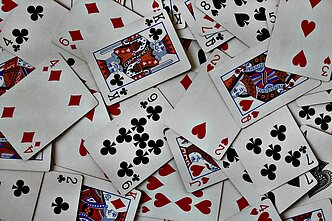 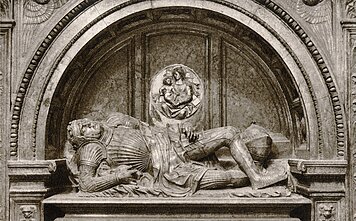 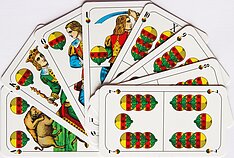