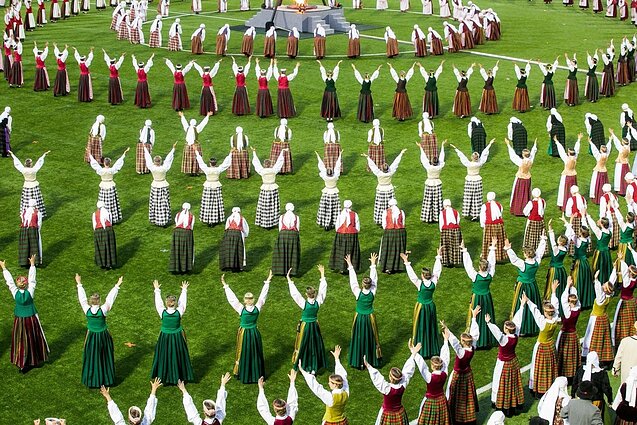 Dancers from 45 troupes will represent 29 cities from the United States, Great Britain, Sweden, Israel, Canada and Lithuania. During a three hour performance, the audience will witness a choreographed production with dancers ranging from 7 to 77 years of age dressed in vibrant traditional Lithuanian folk costumes dancing in unison.

Known as “Šokiu Šventė” in Lithuanian, the festival will be one of the largest gatherings of folk dancers and audience members with Lithuanian heritage in the U.S. The first dance festival took place in 1957 in Chicago while Lithuania was occupied by the Soviet Union and new Lithuanian immigrants sought to preserve their culture in their new home, America. Since then, the festival has been held in major North American cities every four years, and is expected to draw 10,000 dancers and audience members to Baltimore this summer.

L. Linas Orentas, Chairman of the festival’s Organizing Committee, said: “The theme for our dance festival – 'A Journey Calls You There' – is based on and inspired by poetry written by one of Lithuania’s renowned poets, Bernardas Brazdžionis. Our Artistic Committee Director, Los Angeles native Tomas Mikuckis, has created a program that will engage the audience in a re-imagined journey of Lithuanian ancestors. The Lithuanian American communities of Baltimore and Washington, D.C. are carrying on a nearly 60-year old cultural tradition and are ready and waiting for the dancers and guests from around the world to make their journey to Baltimore and experience a dynamic and memorable festival on July 3rd.”

The Lithuanian connection with Baltimore goes back to 1876, when Lithuanians first arrived to the city. Lithuanian landmarks in Baltimore include the Lithuanian Hall on Hollins Street and St. Alphonsus Church on Saratoga Street (founded by German immigrants and later acquired by the Lithuanian community). Of note, Baltimore Colts legend Johnny Unitas was of Lithuanian heritage.

Orentas concluded, “Our dancers and audience members who gather in Baltimore for the folk dance festival over the July 4th weekend will have the opportunity to celebrate Lithuanian culture and independence, as well as America’s 240 years of independence in the city that inspired The Star-Spangled Banner."