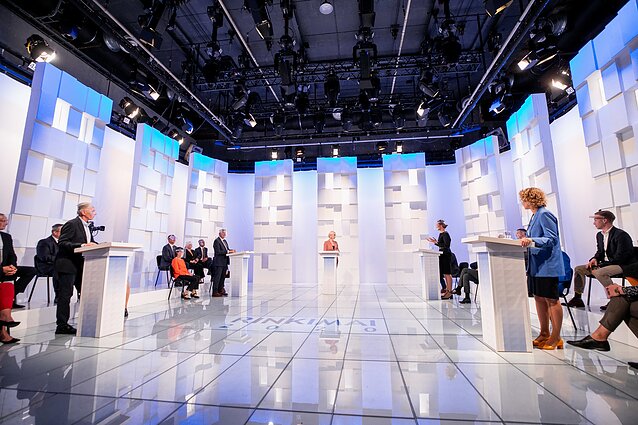 The first debates hosted by LRT in September 2020. / D. Umbrasas/LRT

LRT English presents an overview of the main parties and their pitch to the voters in the upcoming October 11 elections.

Lithuanians will be hitting the polls next month to elect their new parliament and, consequently, the government.

While three parties have been consistently leading in the surveys, a plethora of old and newly-founded groups further down the line is keeping the suspense alive – who will cross the 5-percent electoral threshold? 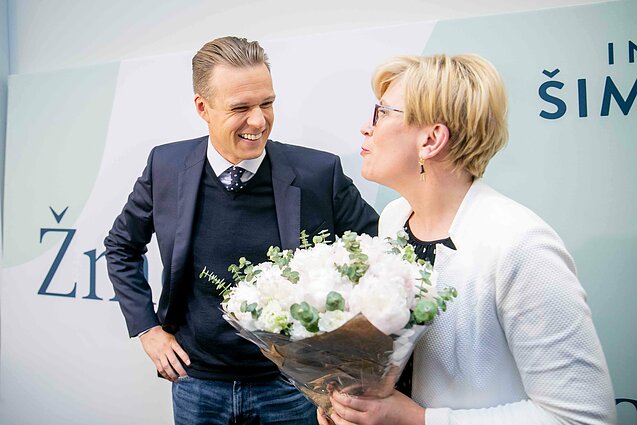 Having spent two last terms in the opposition, Lithuania’s main centre-right party – the conservatives – is leading in the polls and expects to emerge the winner of the elections. However, this is far from a guarantee that it will be able to form the ruling coalition.

The TS-LKD platform focuses on reforming education and healthcare and transforming the economy “so that it generates higher added value”, with a moderate focus on market-led green growth.

Under its young leader Gabrielius Landsbergis, the party has attempted to give itself a younger and more modern face, epitomised by its lead candidate Ingrida Šimonytė, the 'hip' former finance minister who, while not a member of the party, would likely be the prime minister in case the conservatives win.

The drive towards a more modern image has, however, encountered some hurdles, mostly in the form of the party’s prominent right wing that prefers socially conservative and somewhat nationalistic policies. A recent intra-party vote to rank candidates on the ballot gave victory to MP Laurynas Kasčiūnas, the voice of the right wing of the TS-LKD. 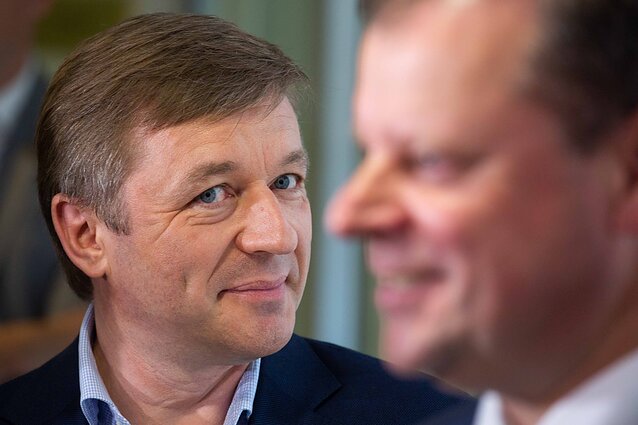 Having dominated the ruling coalition since 2016, the 'farmers' claim that their accomplishments speak for themselves and their main promise is to continue their policies.

The party has been blessed with a term during an economic upturn, taking credit for rising wages, pensions and welfare benefits – as well as managing the coronavirus pandemic rather well.

While presenting themselves as a centre-left party, promising to fight poverty and reduce the gaping gap between the capital city and the provinces, the farmers have also taken pains to emphasise their business-friendly credentials. “We will purposefully improve conditions for businesses and growth,” the party’s candidate Lukas Savickas told BNS. In fact, one of its legacies in government has been a tax cut that, critics say, aggravated the underfunding of the country’s public services.

The party’s lead candidate and potential prime minister is the incumbent Saulius Skvernelis, even though the true puppet master is its leader, agro-millionaire Ramūnas Karbauskis who gives the LVŽS a rather socially conservative tone. The party’s election slogan “For You. For Family. For Lithuania” says it all. 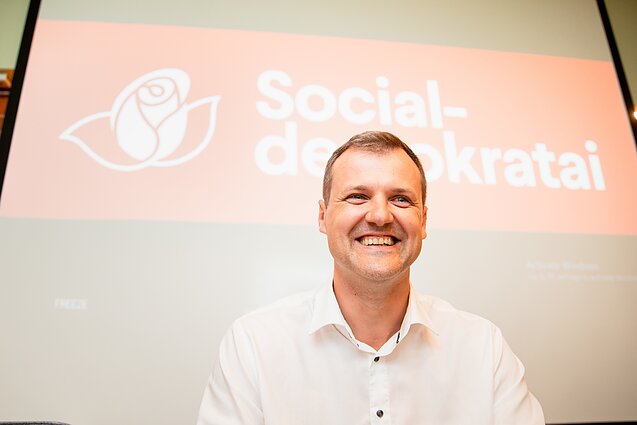 The country’s main centre-left party was leading the 2012–2016 government and started off as the LVŽS’ junior partner after the 2016 elections. However, the LSDP’s new leader Gintautas Paluckas decided the following year to quit the ruling coalition, precipitating a split in the party. A number of its old-guard leaders, including a former prime minister, founded a new party with a very similar name – the Social Democratic Labour Party (LSDDP) – which remained in government.

Since then, the social democrats maintained a low profile in the opposition, achieving average results in local and presidential elections.

Heading into October 2020, Paluckas boasts of a “balanced” platform which, he says, focuses as much on taxes as on government spending. The LSDP calls for cutting consumption levies and raising taxes on wealth and profits.

While Paluckas leads the party’s list and is its PM candidate, he has yet to prove his leadership credentials – his campaign for the mayorship of Vilnius last year ended in abject failure, as did his bid to win a parliament seat in last year’s by-elections. 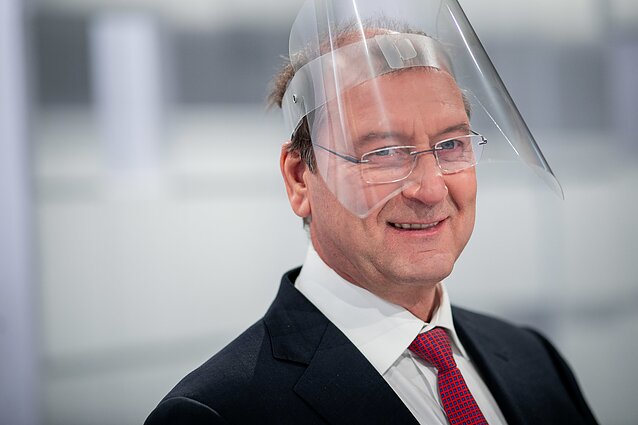 Once a prominent force in Lithuanian party politics, the Labour Party has been left out of parliament and relatively invisible over the last four years – so its good performance in recent polling comes as somewhat of a surprise.

The party owes its success and existence entirely to the wealth and charisma of its founder Viktor Uspaskich who has been doing populism long before it was cool in Western Europe and the US. Railing against “traditional parties” and promising to care for the common man, Uspakich has also been embroiled in numerous corruption investigations. In 2016, he was found guilty of doctoring the Labour Party's books. The party itself was also charged, but avoided sanctions and possible dissolution by effecting a formal merger with another party.

This time, the Labour Party’s platform promises to work towards improving business conditions for local producers and boosting private investment in the country’s regions – saying this will provide the economic basis for social spending.

Curiously, Uspaskich himself is not even running for a parliament seat, preferring to keep his mandate in the European Parliament. He said, however, that he would return to Vilnius if he were offered the premiership or an economy-related post in the minister cabinet. 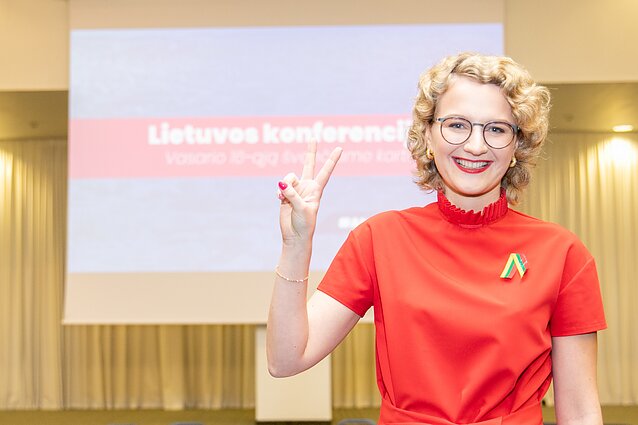 Founded last year, Freedom Party is mostly made up of liberals who were formerly in the Liberal Movement, but followed Vilnius Mayor Remigijus Šimašius when he left the party.

At the same time, it is advocating hardcore pro-business policies: cutting taxes, reducing regulation, loosening the labour code. The party says its goal would be to put Lithuania at the top of the World Bank’s Doing Business ranking.

While not seriously expecting to win the majority, party leader Aušrinė Armonaitė says the goal is to get at least 100,000 votes. 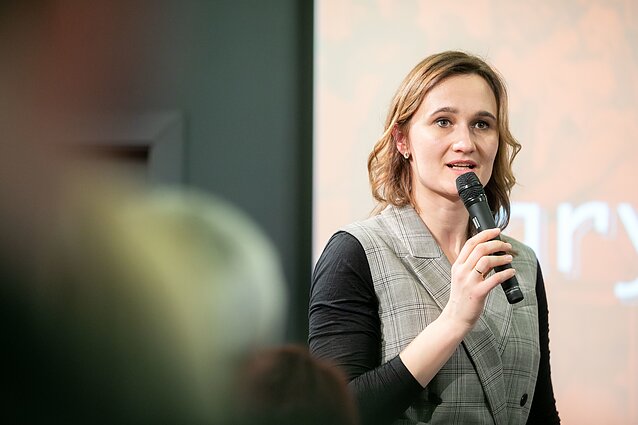 The Liberal Movement, once Lithuania’s most prominent liberal force, is still recovering from the 2016 corruption scandal that has its former leader Eligijus Masiulis still fighting bribery charges in courts.

Under the leadership of MP Viktorija Čmilytė-Nielsen, the party is proposing an expectedly pro-business and anti-regulation platform, framing it in opposition to the current government’s policies.

“Over the last four years, the government constantly tried to impose bans and restrictions on people, leaving little choice or opportunity,” Čmilytė-Nielsen told BNS, promising to roll back some of the rules adopted by the Farmers and Greens, like limited alcohol selling times.

Much like their former fellows in Freedom Party, the Liberal Movement proposes to cut taxes and advance LGBTQ+ rights (offering gender-neutral partnership, however, rather than full-blown same-sex marriage).

It also cites the EU’s Green Deal, saying Lithuania should make full use of the support to “convert our economy”. 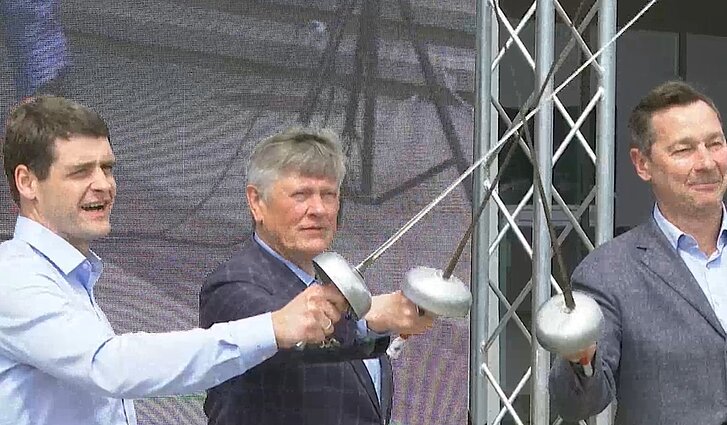 The trio have been dubbed “the three musketeers” and are running with the witty slogan “One for all, all for Lithuania”.

Among the party’s more original proposals is to extend the parliamentary term from four to five years and set up the Ministry of Future – in charge of the knowledge economy, scientific and technological innovation, and other buzzwords of the day.

Freedom and Justice says it is targeting centre-right voters with a mixture of pro-business policies and somewhat socially liberal proposals, like legalising gender-neutral civil partnerships, while emphasising that marriage is between a man and a woman. 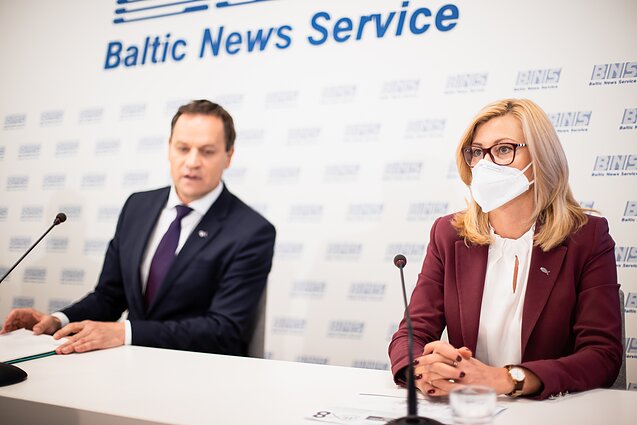 The party’s base is Lithuania’s Polish-speaking minority, mostly concentrated in the southeastern districts of the country, and as such it has always enjoyed a small but stable support. It takes part in the current ruling coalition with two ministers in the cabinet.

Led by MEP Valdemar Tomaševski, the LLRA is one of the most socially conservative parties in the country that once advocated abortion ban. It prefaces its platform manifesto with a quote from St Augustine and concludes it with “so help us God”.

In addition to promises to advance Christian and traditional family values, the LLRA-KŠS calls for publishing the lists of Lithuania's former KGB collaborators and devolving more power to local authorities – which makes sense for a party with a very localised constituency.

At the same time, the party promises to increase welfare benefits and cut income tax on minimum wage earners to near-zero, while slamming a tax on bank assets and supermarket turnover – something it tried to do, unsuccessfully, last year. 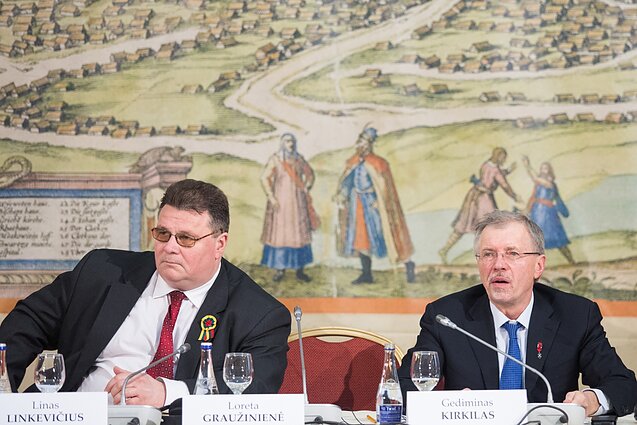 Founded in 2018, the LSDDP is a result of the split in the Social Democratic Party that happened after a newly-elected leader decided to pull the party out of the ruling coalition. Reluctant to leave power, a group of prominent social-democratic members quit the party to form a new one with a near-identical name.

With a former prime minister, Gediminas Kirkilas, and a current foreign minister, Linas Linkevičius, on its candidate list, the LSDDP presents itself as a party of expertise and experience.

Its platform extolls classical social-democratic principles – social security and public services – while taking pains not to alienate businesses with talk of new taxes to pay for them.

The party ratings are based on the Spinter Tyrimai poll, commissioned by Delfi.lt, conducted between August 26 and September 4. The same poll indicates that nearly 30 percent of voters are still undecided or do not plan to vote at all. 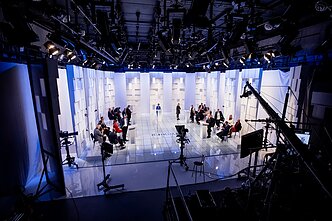 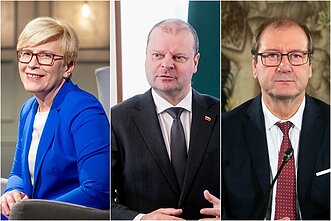 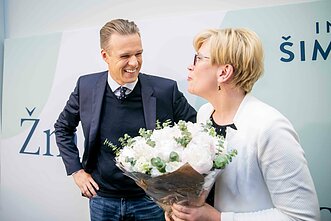 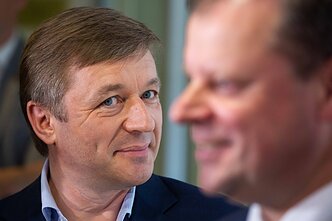 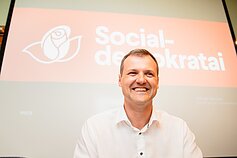 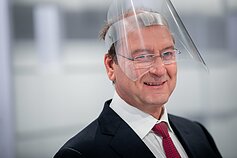 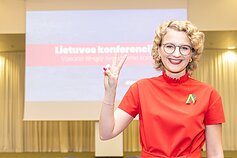 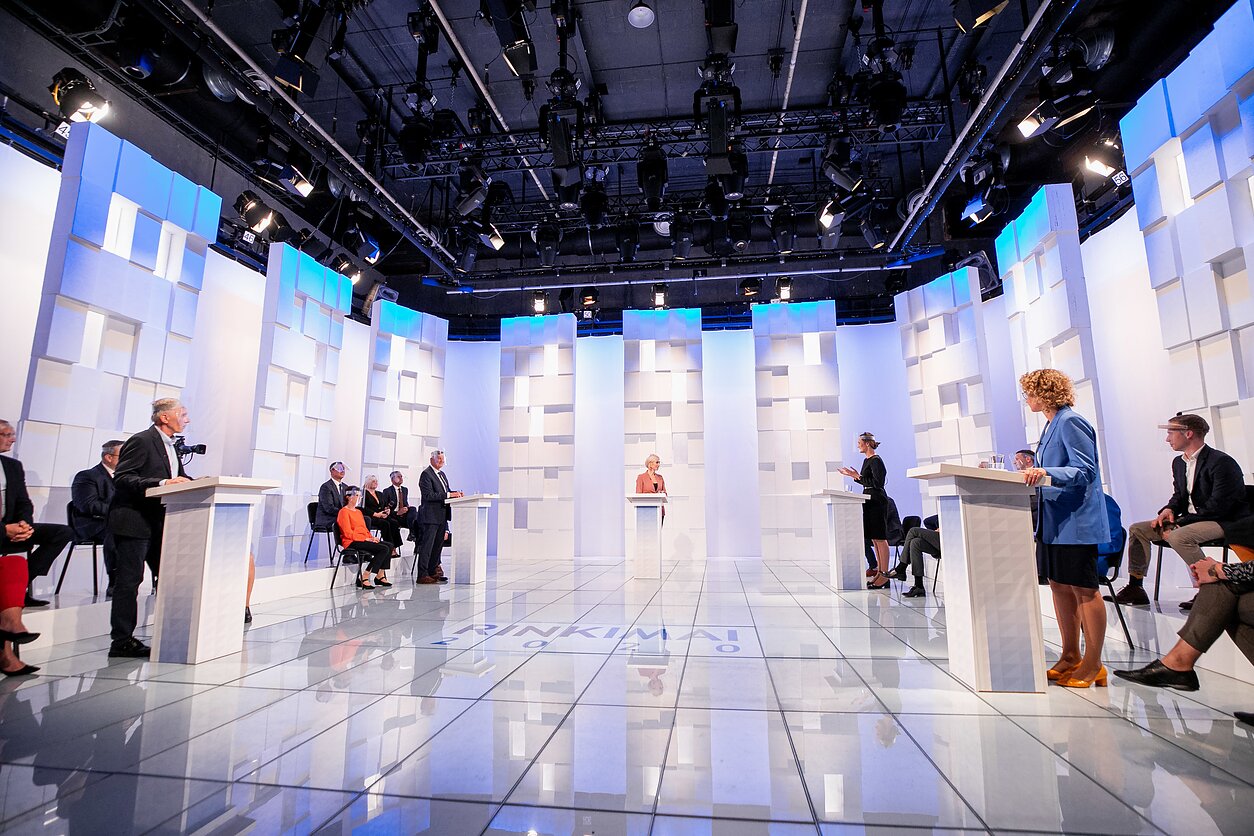 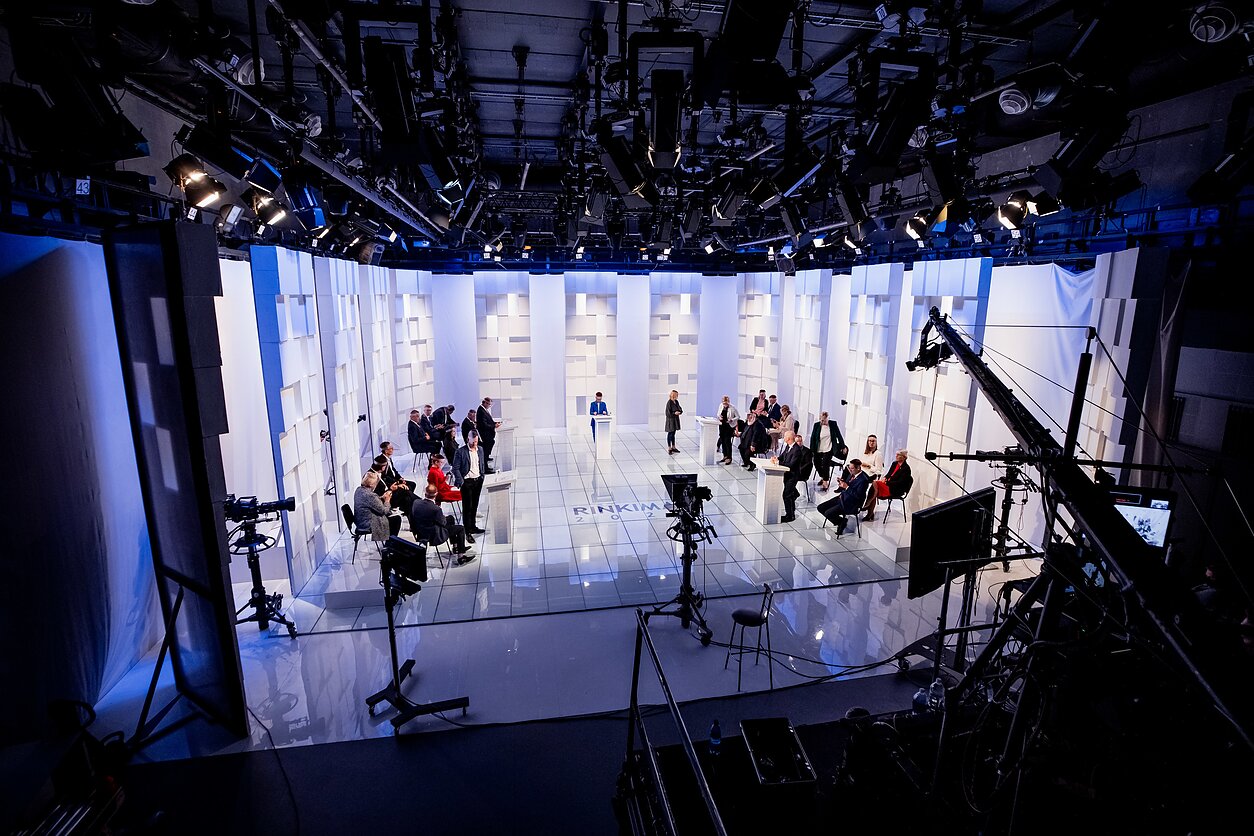 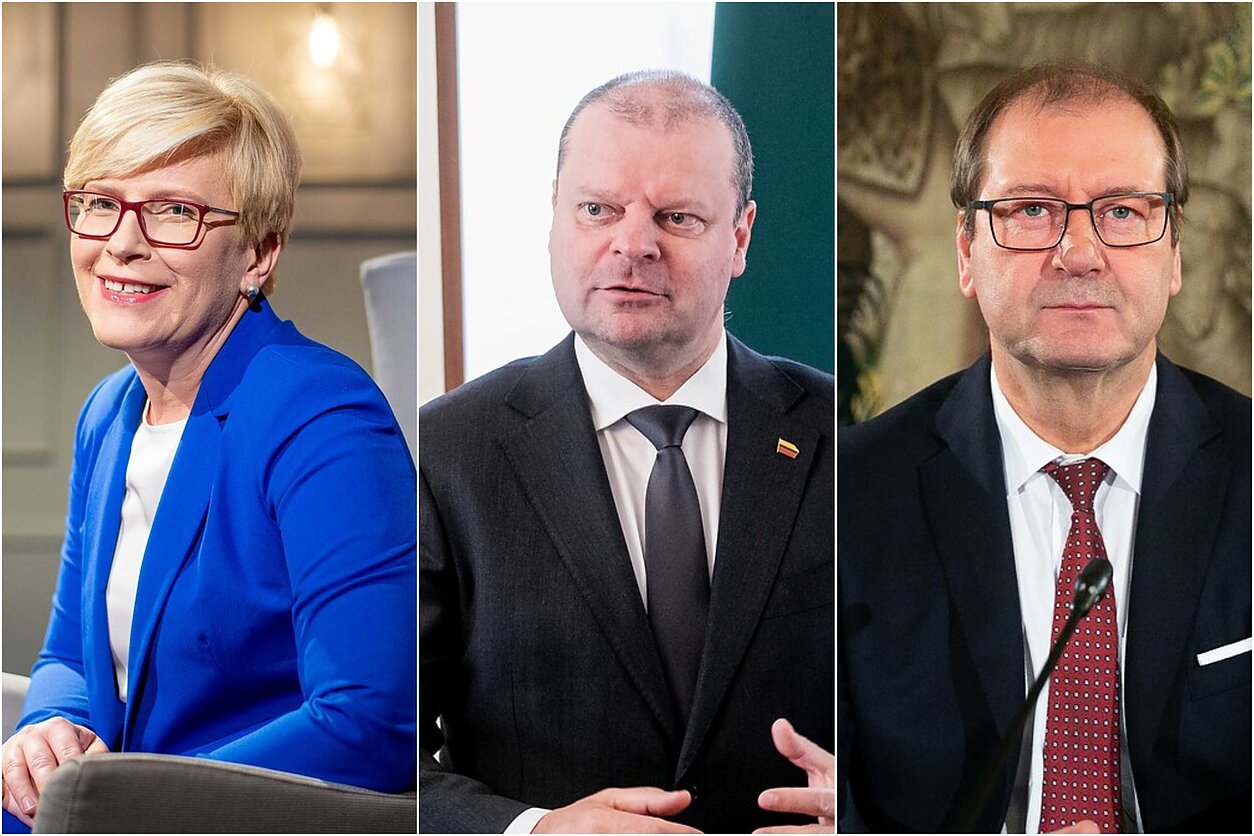 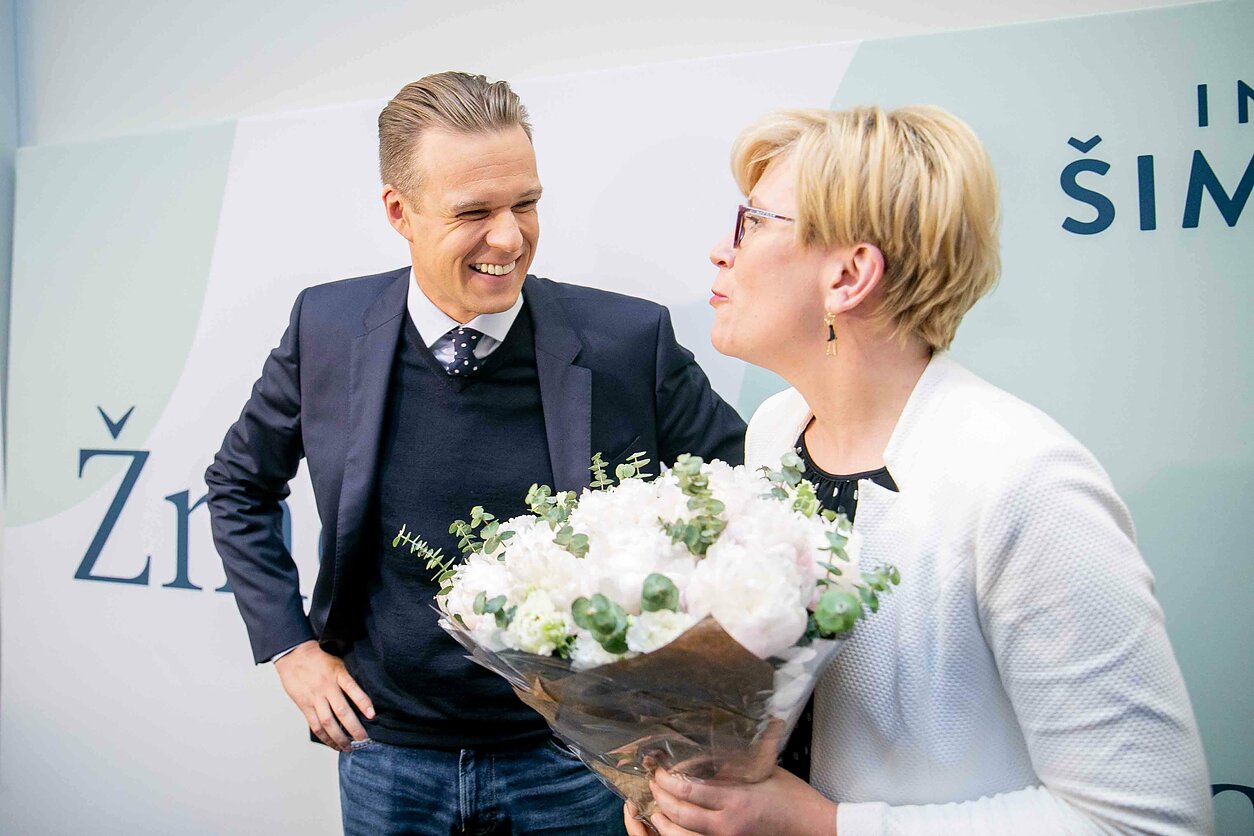 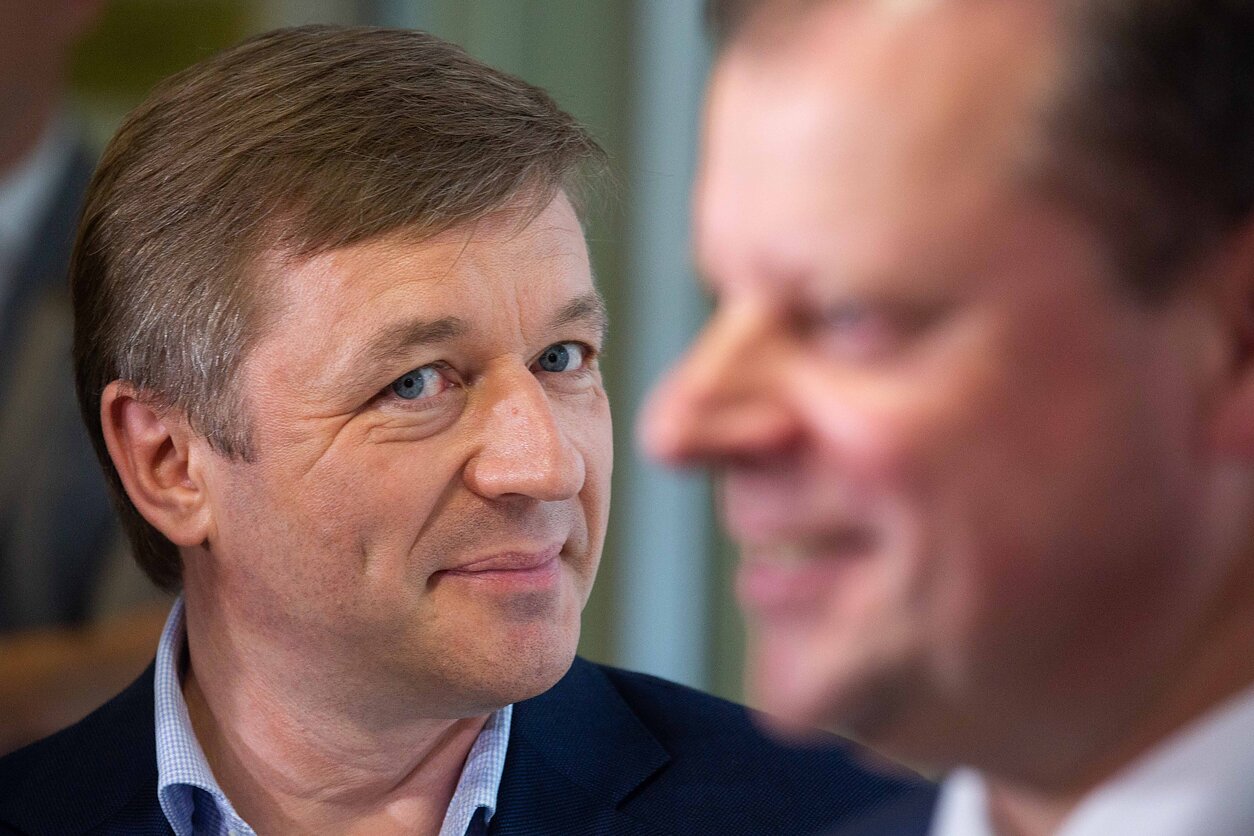 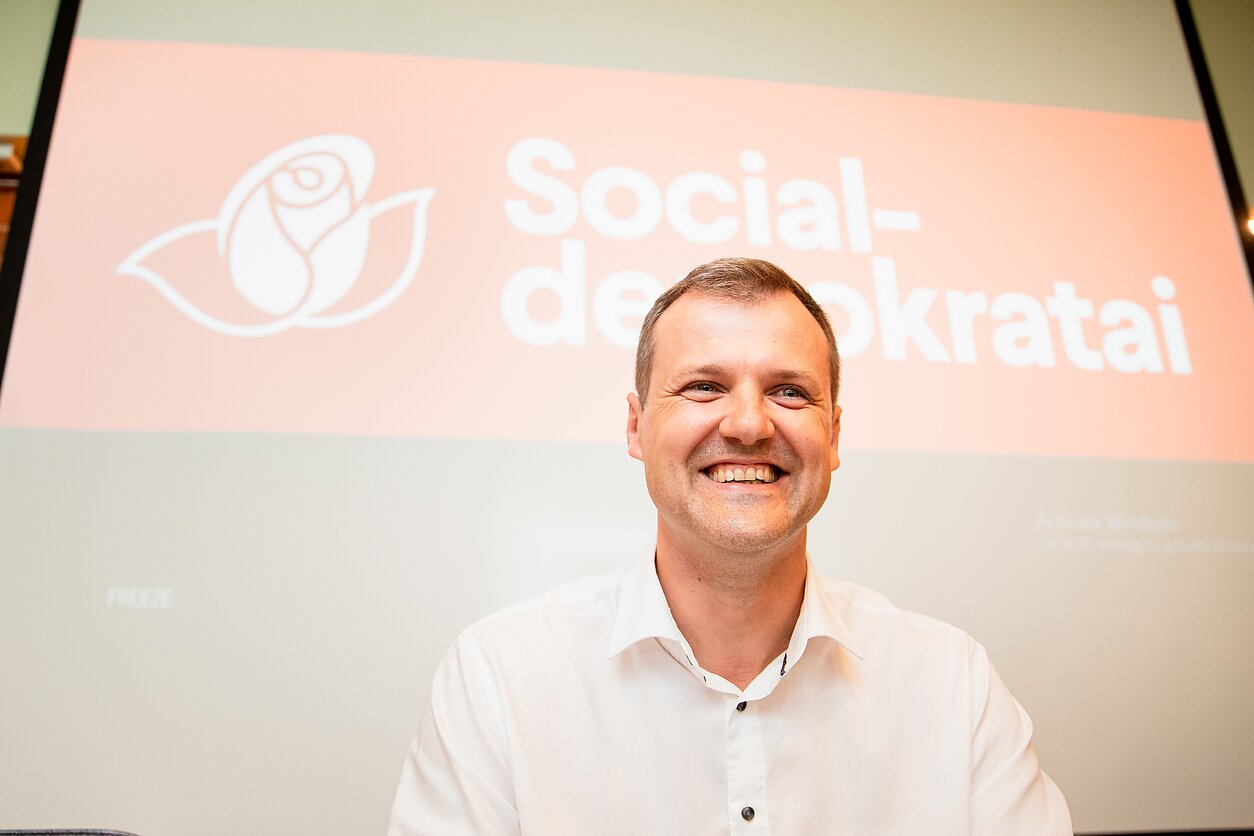 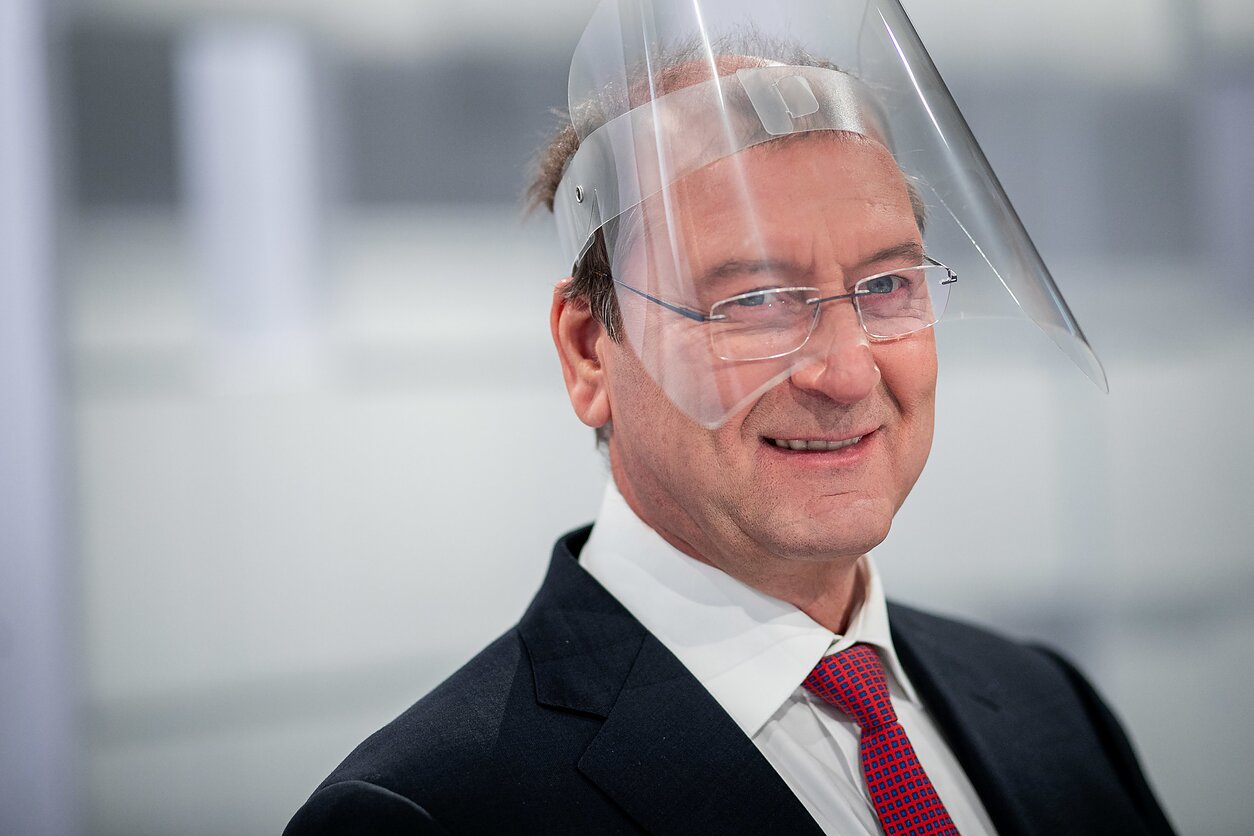 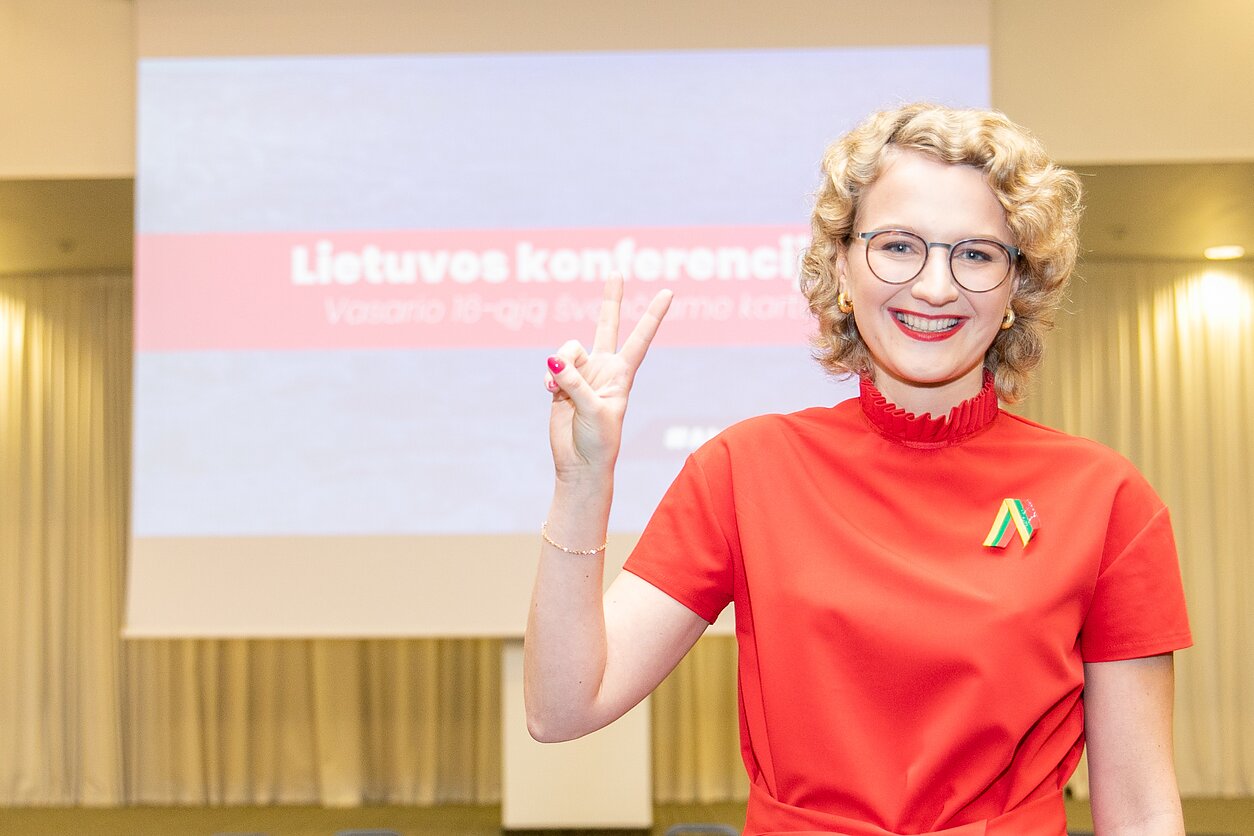 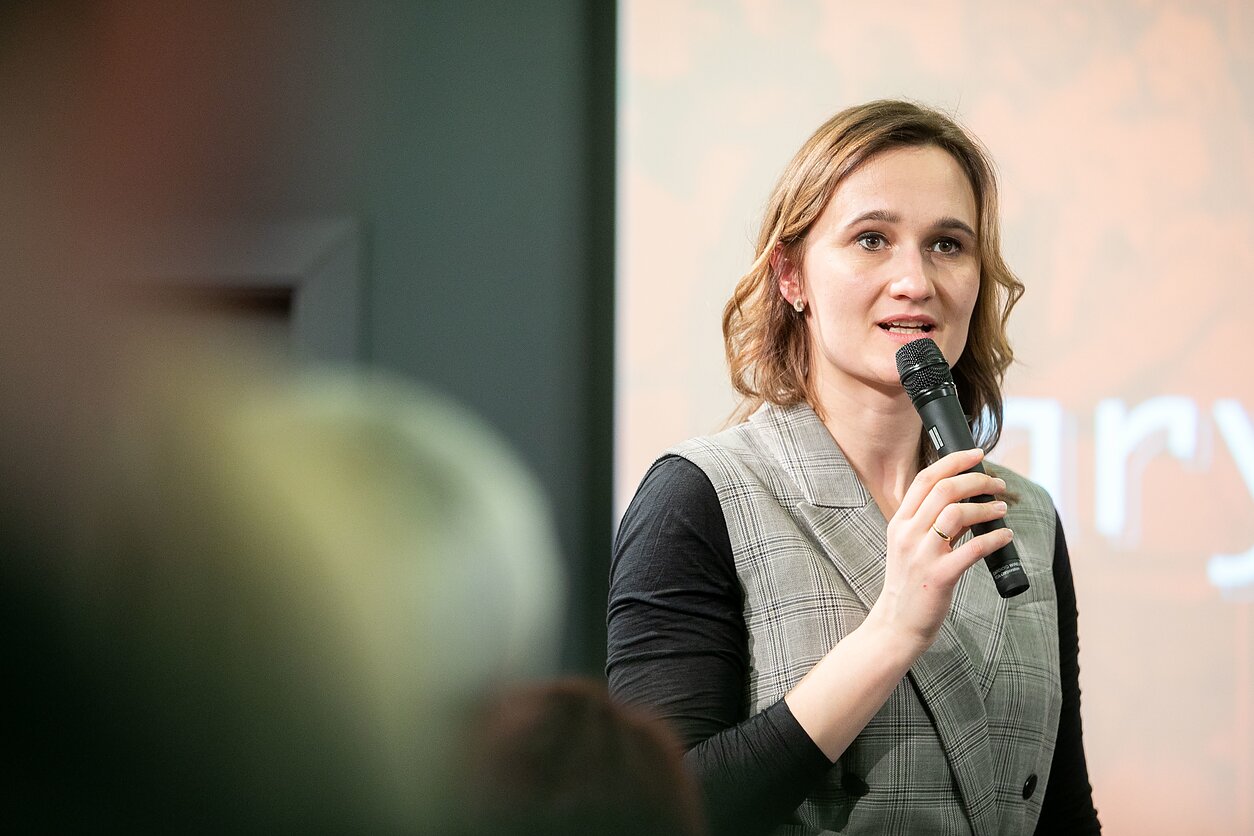 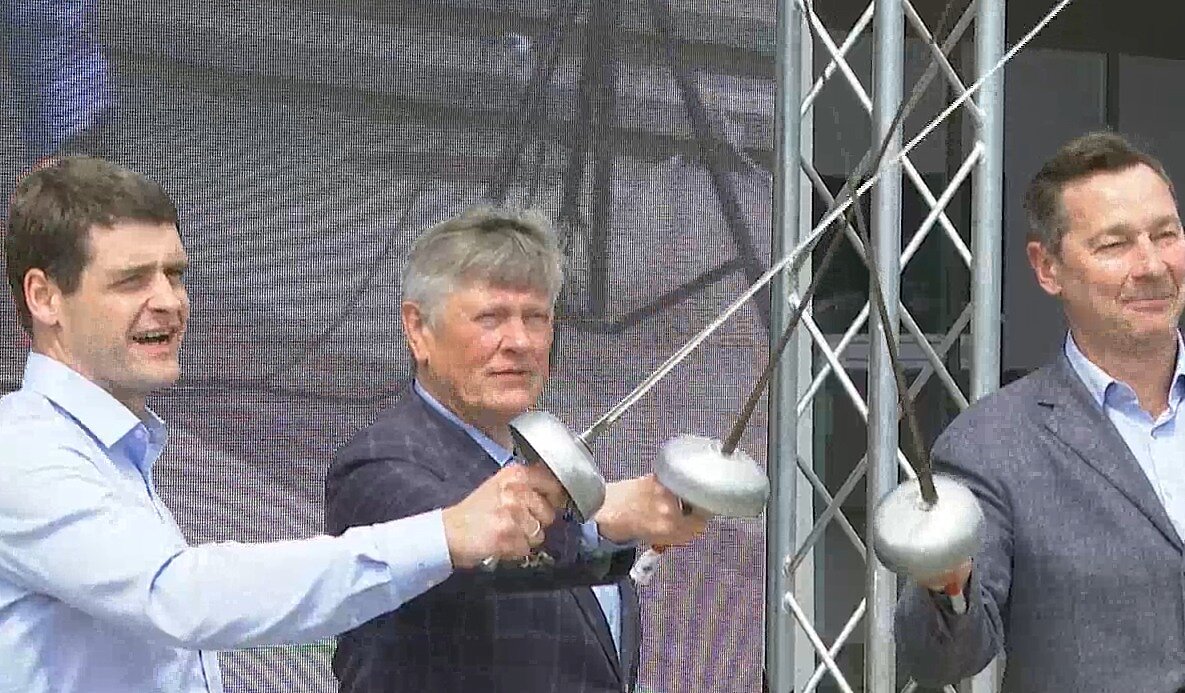 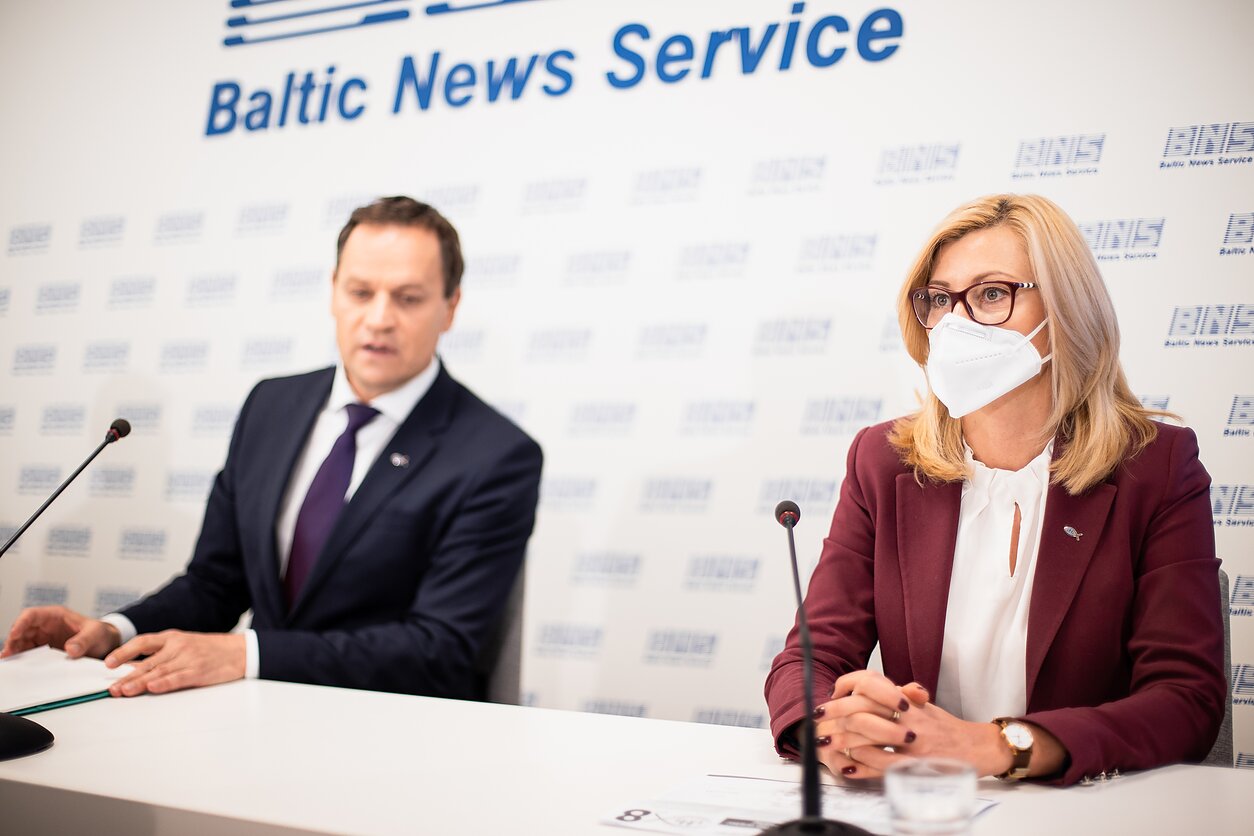 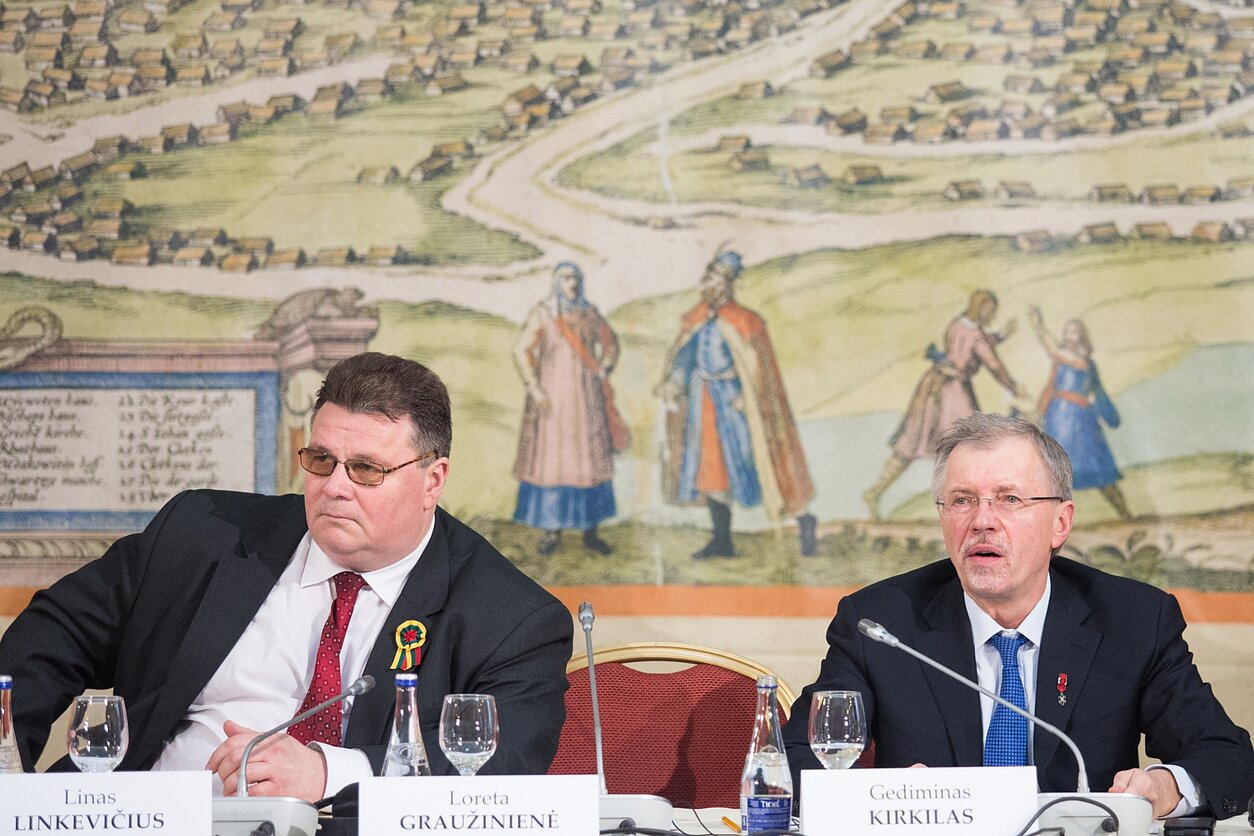