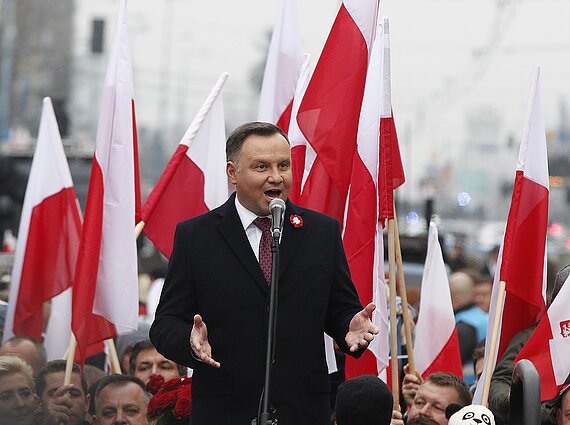 Polish President Andrzej Duda says that disagreements with Lithuania are now in the past, and the nations are not only neighbours, but also the closest allies. In an exclusive interview with LRT, Duda saiys he shares the same values and attitudes with Lithuania’s new President Gitanas Nausėda.

Gitanas Nausėda has chosen Poland for his first official visit. How would you describe the current relations between Lithuania and Poland?

For some time now, the relationship is good, and I say that with great pleasure. I have to admit – I was very happy when I heard that the president chose Warsaw for his first visit.

This clearly shows the president’s view towards our region, towards our common cause – neighbourly relations. They are very important to me.

It’s important that the relations between Lithuania and Poland, including between our societies, are as good as possible [and] that a border doesn’t separate us – even though it doesn’t really exist – [as our] nations live side by side and share great history and friendship.

Therefore, I hold this president’s gesture as a sign of friendship and with great pleasure I will greet the president and his wife in Warsaw.

The newspaper Rzeczpospolita has recently quoted a Lithuanian political scientist saying that Russia’s aggressive policy is making Lithuania and Poland become close partners. What is your opinion? What are the current relations between Poland and Russia like?

[The Three Seas Initiative is a forum for twelve states adjacent to the Adriatic, Baltic and Black seas]

We are allies, not only neighbours. We’re also marking joint commemorations, for example, this year’s 450th anniversary of the Union of Lublin. I think this has the utmost importance, and [history] now unites us.

We have many common interests and a lot of common causes that we have accomplished on the EU level and on its periphery – like the aforementioned Three Seas project. We have many things to solve together that are very important to our citizens – transport corridors that would ease the movement for business from north to south, and from the Baltic states, of course via Lithuania and Poland, onward to Europe’s south. Also, via Baltica and Rail Baltica, and our energy bridges.

There are many things that we would like to develop and that we [currently] lack. Because of the difficult years when Lithuania didn’t exist as an independent nation, and Poland was not completely sovereign, when we took big economic losses, because we couldn’t develop [economy] normally – today there is a big need [to develop], and we will be able to reach [our goals] when we work well together. 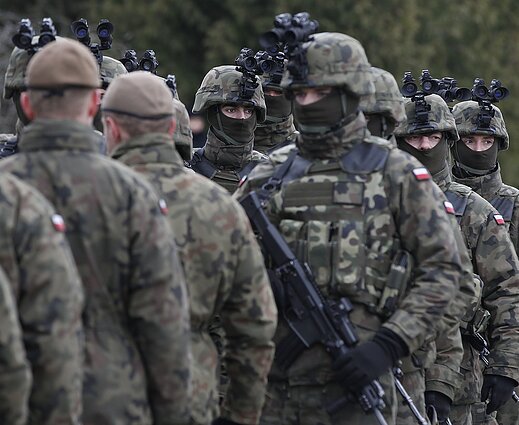 Lithuania supports the idea of setting up the so-called Fort Trump in Poland. Even though the US is an important ally for both our countries, it’s sometimes said that the first to come to Lithuania’s aid would be the Polish troops. Is Poland a steadfast partner?

First of all, let’s hope nothing bad will happen. But, as it’s said, you need to give luck a helping hand, and we can help luck by taking steps to strengthen our security.

We, as NATO allies, are aiming to strengthen joint security in our part of Europe, on NATO’s eastern flank. Our aim is that the allies’ presence [is noticeable] and obvious.

That’s why, when I became president, I fought for three years before the 2016 NATO summit in Warsaw. During the summit, we managed to reach an agreement that the allies take a decision to strengthen resources on NATO’s eastern flank.

Now, it’s a reality. NATO forces are deployed in Estonia, Latvia, there are also Polish troops there, NATO forces are also in Lithuania and are guarding the security of all Baltic states; the American forces are also deployed in Poland. We have 4,500 US troops, and according to the agreement we recently signed in Washington together with US President Donald Trump, there will be more. There will be a US brigade – that is, a division – headquarters in Poland.

We are looking after security, as it’s now important to us. Lithuania is our closest neighbour, our ally, and we even feel brotherly connections. In geographic sense, we seem to be the security centre for the Baltic states, including Lithuania, and we’re trying to justify that, and to make sure that there are as many allies as possible in our part of Europe.

Whose idea was it to propose the name, Fort Trump? Who thought that it would probably be easier to convince Donald Trump that way?

It’s like a symbol of the idea, which President Trump agrees with. It’s very good that his views towards our part of Europe is serious, that he considers us as serious allies and economic partners. I mean not only Poland and the Polish people, but also NATO’s whole eastern flank. It’s very important to cooperate with the Americans, and Fort Trump is a symbol of the interest for the American presence.

US soldiers will arrive to help accomplish the Fort Trump idea, as it won’t only be the base. They will be deployed in several locations, will do various important tasks. It won’t be a single component – there will be special forces, logistics elements, and commanders.

Therefore, elements of American presence [...] will be the beginning of the upcoming American infrastructure, which will be developed in our territory. 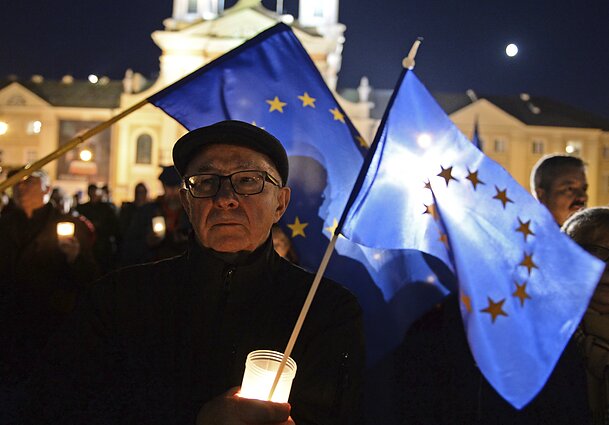 People hold candles and EU flags as they protest against judicial reforms proposed by the president and ruling party Law and Justice, in front of the Supreme Court in Warsaw, Poland, on October 1, 2017. / AP

Does Poland feel that in the European Union, besides Hungary and other Visegrád nations, Lithuania is also an ally?

We feel it, there were many cases where Lithuania goodwillingly supported us. There was this historic gap, where we were imprisoned by the Soviet Union, we didn’t have sovereignty, Lithuania wasn’t even a state then.

So, we survived that historic stage and, unfortunately, we still have its heritage. That’s why we understand each other, because there are elements which we should remove, so that our democracy is normal, that we are a freely functioning state – a truly modern state – and our institutions are western without the old cliques and communist heritage.

Is Poland satisfied with the allocation of the EU’s top posts?

It’s bad that following the EP elections, there isn’t a representative from Central Europe – our part of Europe.

But in a broader sense, EU institution allocation reflected the election results. The European People’s Party received the most votes and the candidate for the European Commission [president] is an EPP delegate. It would be strange, if the candidate were from a losing European party, [...] it would even be undemocratic.

What can I say, I do not directly deal with EU affairs [...] I can say that even to me it’s not known if it was the official position of Poland.

[...] I always stress what Pope John Paul II said to the Polish people when we joined the European Union – ‘from the Union of Lublin to the European Union’. This is very important to us, we haven’t forgotten it and it’s a strong basis for the Lithuanian-Polish friendship. I hope that we will hold on to oaths of the previous generations that tried to bolster our relations. 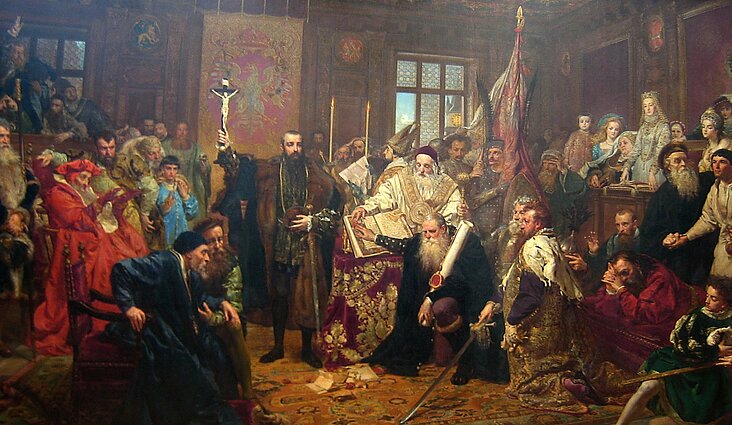 I hope we will walk this path with the [Lithuanian] president. As far as I know, our views are similar in many aspects – that is, maintaining traditions.

As far as I know, the president is a more conservative politician, and my own view to what surrounds us is also more conservative. Christian underpinning is very important to us, because it’s the cornerstone of the Polish state.

Since adopting Christiniaty in 966 AD, we feel that we are a nation, a state. To a greater extent, it led to what we call the Polish-Lithuanian Commonwealth, when we took decisions on friendship, neighbourhood, and joining unions, together. 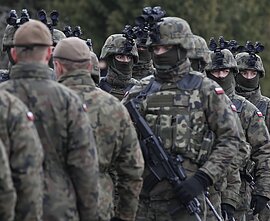 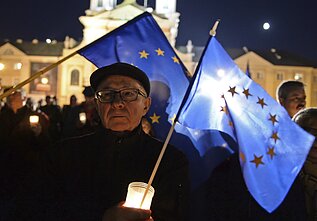 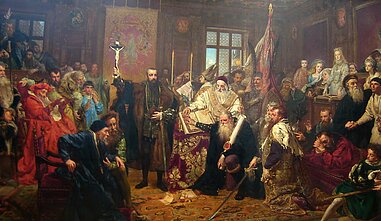