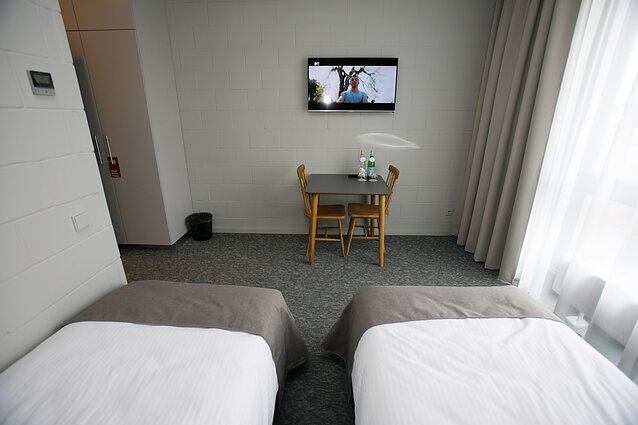 Hotels would have to pay for Hotelstar classification, according to a government proposal / BNS

Luxury hotels should pay a higher fee for getting their five-star classification than budget hostels, the Lithuanian government has proposed. The country's hoteliers resent additional charges and would want better services.

Hotelier Ingrida Valaitienė says it takes considerable investment to provide high-quality services. Particularly, if you want your hotel to earn an additional star.

“We buy new furniture, because there are specified dimensions, better toiletries. There are many criteria to meet and we put in our money to get a four- or five-star rating,” says the owner of the Grand Baltic Dunes hotel in Palanga.

Valaitienė disagrees that hoteliers should be additionally charged to get rated.

Lithuania joined the European Hotelstar's Union in 2011 and the government assesses the country's hotels and hostels to classify them according to a 5-star system. ‘Mystery guests’ usually make the assessment how hotels meet the set criteria for each category.

Now the Ministry of Economy has proposed a law to tax hotels for the service of getting rated. Moreover, the fee would depend on the awarded classification.

One-star-rated hotels would be charged €160, while the top ranking, of four or five stars, would set hoteliers back €410. The tax would be collected once every five years.

Renaldas Čiužas, of the Ministry of Economy, says that hotels should pay for services provided to them by the government.

“Otherwise, the state would have to offer exemptions to other business groups, too, since we charge a fee for travel agency licenses, tour guide certificates and other documents,” Čiužas says.

Lithuanian hoteliers say that the star classification is very important and they would agree to pay for it, but expect more and better services in return.

“We would like more quality and that the ‘mystery guest’ is not one person travelling across the entire country whom everyone recognises,” says Evalda Šiškauskienė, the president of the Lithuanian Hotel and Restaurant Association.

Meanwhile the Lithuanian Free Market Institute (LLRI), a thinktank, criticises the government's proposal to differentiate the classification fee according to the star ranking.

“It is the same service, but some establishments would have to pay twice more than others,” says LLRI economist Ieva Valeškaitė. “The price should depend on the service provided.”