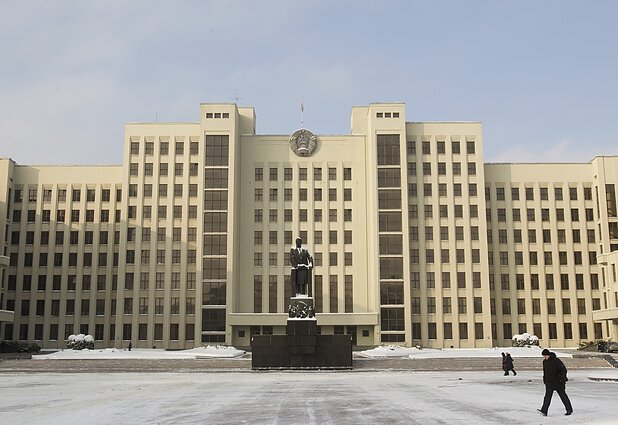 Belarusian representatives complained in Brussels last week that Lithuania was blocking an agreement on partnership priorities between the European Union and Minsk.

Vilnius says such an agreement is impossible until Belarus, which is building a nuclear power plant by the Lithuanian border, changes its attitude to nuclear safety.

Belarusian Foreign Minister Vladimir Makey went to Brussels on the occasion of the 10th anniversary of the EU Eastern Partnership project and said Lithuania was stalling talks on the agreement.

“We cannot sign an agreement on partnership priorities because of the position of one country," the politician told the Belsat TV channel. "Speaking about the construction of the nuclear power plant in Belarus, our actions are transparent.”

European Commissioner for Enlargement and European Neighborhood Policy Johannes Hahn has confirmed that during negotiations with Belarus, Brussels is discussing the Astravyets issue with Lithuania.

Lithuania has been trying to block the Astravyets project for years, accusing Minsk of violating international agreements and failing to meet nuclear safety requirements.

Lithuania's Ministry of Foreign Affairs told BNS Lithuania that an EU-Minsk agreement on partnership priorities is possible, if Minsk takes into account the EU stress test recommendations and prepares a plan to ensure its safety.

The ministry says that "Belarus' non-constructive position fails in any way to contribute to further development of EU-Belarusian relations".

"Lithuania's consistent position is that, besides ensuring proper nuclear safety in the EU neighborhood, respect for human rights and freedom, the rule of law and the execution of real reforms are an important precondition for further development of EU-Belarusian relations,” the Lithuanian Foreign Ministry said.

Hahn hopes the agreement with Belarus will be reached eventually. "There is a joint understanding also on the Lithuanian side, that partnership priorities is something which is very much in the interests of everybody and I hope an agreement can be found. We are working on this," he said.

A visa-free regime between Belarus and the EU is another issue that has been stalled, according to Doctor Laurynas Jonavičius from Vilnius University Institute of International Relations and Political Science (TSPMI).

“Despite negotiations and talks for many years, simplified visa procedures [besides the visa-free regime] is also stalled for the same reasons,” he said.

The Astravyets nuclear power plans is under construction some 50 km from Vilnius, and its first reactor is set to be launched this autumn.

Lithuania’s former energy vice-minister and a current lecturer at TSPMI, Romas Švedas, says Belarus violates the Espoo convention which obliges countries to assess the environmental impact at an early stage of planning.

“When Belarus says they’re working with the International Atomic Energy Agency (IAEA), they are [ignoring] the second question, which looks into nations’ cooperation on expected environmental effects,” said Švedas.

“This convention is very important, as it regulates how countries, which could be exposed to negative effects, should cooperate during the construction of major projects – whether it’s power plants, highways or geological mines,” he said.

“What Belarusian foreign minister fails to mention is that Belarus has violated the Espoo convention when constructing the plant,” added Švedas.