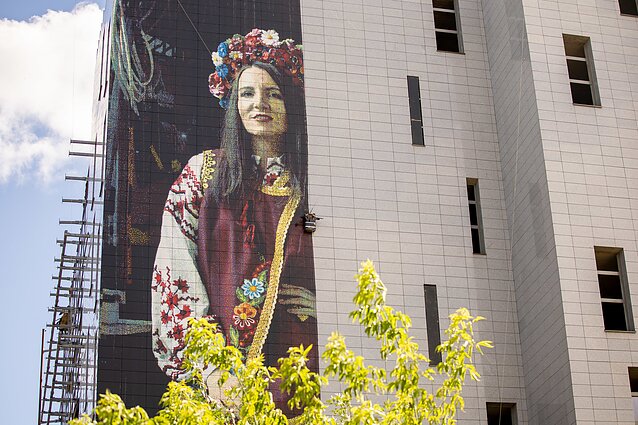 Mural on the Moscow House in Vilnius / D. Umbrasas/LRT

In Vilnius, a giant image of a Ukrainian woman in a national costume has appeared on the Moscow House facade. This is a joint response by Lithuanian, Ukrainian, and Estonian artists to Russia’s war in Ukraine.

The project “Do Peremogi” (“Until Victory”) was conceived by Lithuanian artist Lina Šlipavičiūtė. The chosen image of Tatyana, a volunteer working at the Zaporizhzhia Refugee Centre, is by Ukrainian photographer Olena Tytarenko. The photoshoot took place in a workshop where Ukrainian volunteers make anti-tank obstacles and other equipment for Ukraine’s fight against the Russian invasion.

The more than 200 square metre mural was painted with aerosol paint by a robot created and closely supervised throughout the process by Estonian artist, engineer, and inventor Mihkel Joala.

The funds needed for the project – 13,000 euros – were raised by the Lithuanian people in just a few days.

The fantastic mural appeared on the wall of the House of moscow in Vilnius as yet another symbol of support for Ukraine. The huge mural depicts a volunteer helping temporarily displaced persons and 🇺🇦 defenders in Zaporizhzhia and was created by a team of 🇱🇹, 🇪🇪 and 🇺🇦 artists. pic.twitter.com/VNwJ0umdfy

According to Šlipavičiūtė, the mural aims to draw attention to the Ukrainian volunteers – the less visible people who are vital in Ukraine’s fight against Kremlin’s forces.

“Ukraine is able to resist [the Russian invasion] because the people are extremely united,” the artist told LRT.lt.

“I chose this photo because the girl in it embodies Ukraine, which is brave, determined, seemingly fragile, but very strong and beautiful,” she added.

The construction of the Moscow House in Vilnius started in 2008. The building had to serve as a cultural and business centre for developing “good neighbourly relations” between Moscow and Vilnius. 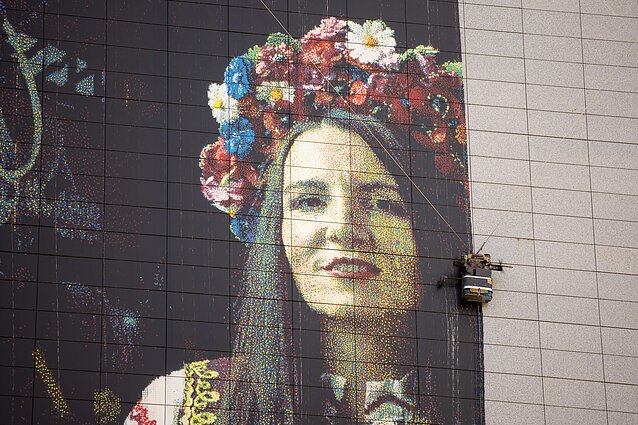 Mural on the Moscow House in Vilnius / D. Umbrasas/LRT

In 2016, the building was found to violate construction rules. In 2017, the Lithuanian State Security Department (VSD) found that the Moscow House “has a relatively high symbolic and practical significance for Russia as a potential instrument of influence, politics, and public diplomacy”. It has never opened.

Šlipavičiūtė said she chose the building for the mural because of its suitable walls and symbolism.

Vilnius mayor Remigijus Šimašius has previously said that the Moscow House will be demolished. The artists plan to preserve the mural by taking off the tiles before the demolition of the building. 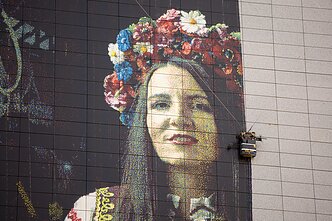 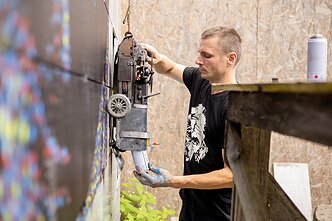 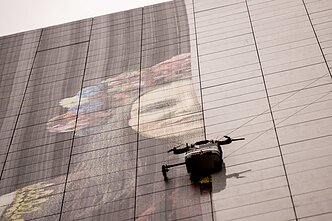 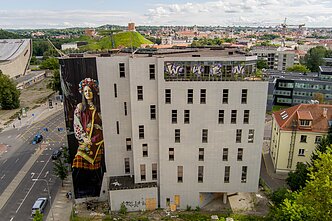