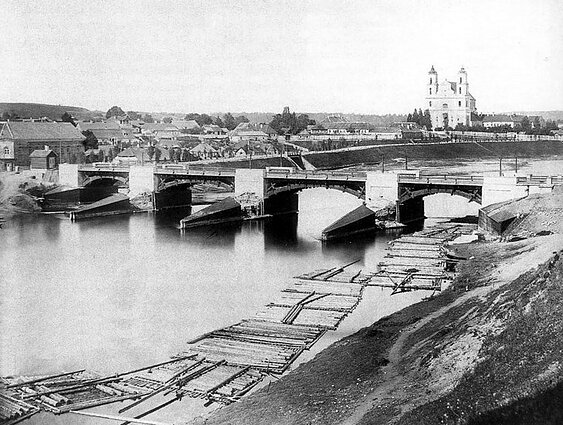 The Green Bridge before 1890 / Wikipedia

When the wooden bridge over the Neris river at the present-day Kalvarijų Street collapsed yet again in 1655, people of Vilnius were forced to use boats and ferries to cross the river for the next fifteen years. In 1670, the Sejm of the Polish-Lithuanian Commonwealth obliged Vilnius magistrate to build a new bridge within two years.

The Italian Bartolomeo Cinachi served as the wójt of Vilnius (today we would call him mayor). Soon he presented a project for the new bridge: it was to be made of wood, yet reliable enough thanks to its design without intermediate supports that would be damaged by drifting ice every spring and necessitate repairs or rebuilding.

The plan must have sounded very ambitious, as single-arched bridges were just a theory in 17th-century Europe. The only bridge of this sort was to be built in Pisa, but its construction never began.

An Italian in Vilnius

Bartolomeo Cinachi (d. 1683) was a wealthy financier, born in the city of Lucca. Together with his Warsaw-based brother, he belonged to an influential group of Italian businessmen active in the Grand Duchy of Lithuania, the Kingdom of Poland, Royal Prussia, and indeed Italy. The group controlled huge assets and managed the operation of postal service and customs. In Lithuania and Poland, they maintained close ties with the royal court and several magnates, such as the Pac family.

Italians introduced a number of innovations in Lithuania, by setting up some of the very first private limited companies in the country, popularised the use of promissory notes, developed science and technology.

Following Cinachi’s directive, the construction of the bridge across the Neris was entrusted to the wójt’s friend, architect Giovanni Battista Frediani (1627–1700), also from Lucca. He promised to build a wooden bridge “without precedent in Lithuania or the rest of the world”, supported by a single 73-metre-wide arch. All that for a price of 6,000 złotys that was much lower than what local artisans were proposing. 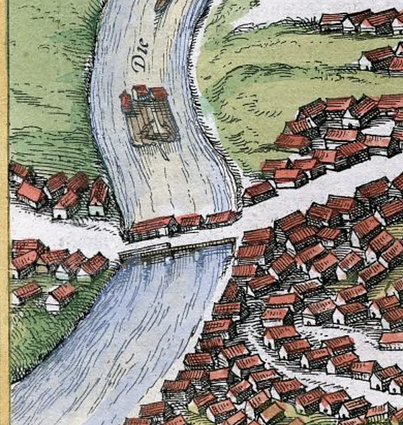 Gone with the stream

Once the city authorities approved the project, construction works began.

In line with the architect’s plan, separate segments of the bridge, consisting of beams joined by bolts, were initially assembled near the river under the supervision of the royal carpenter Martin Fick. Powerful supports on both banks – at 9.8-metre long, 13-metre wide and 11.7-metre tall – were built and only after the masonry work was completed was it discovered that they differed considerably and required readjustment.

Then scaffolding had to be built to support the arch of the bridge. It rose too high and part of it had to be disassembled. The magistrate was not happy with the architect who changed the design of the bridge during its construction. All this added to delays, yet finally, in December 1672, the complete arch rested on temporary pillars.

In the first days of the New Year, the magistrate ordered to start the last stage of construction: the dismantlement of the scaffolding. But carpenters refused to work without a permission from the architect, who was reluctant to take the risk, since a thaw started on January 6, 1673.

Frediani’s cautiousness proved to be well grounded. When he finally ordered to dismantle the scaffolding, the bridge immediately began to rumble and fall. Carpenters fled in terror. 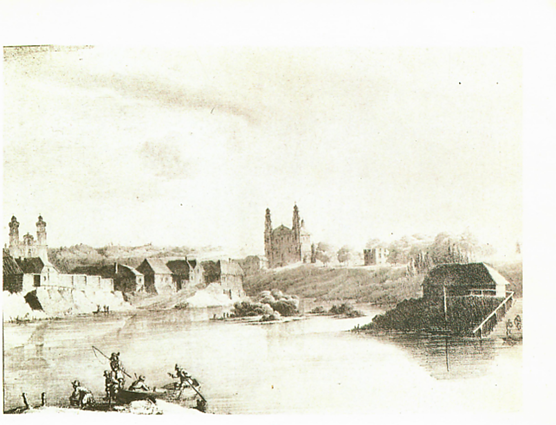 Ferry at the site of the Green Bridge. T. Bičkauskas, 1823. / Orbis Lituaniae

Eventually, once the river brought ice and strong winds, the giant edifice, decorated with crosses, collapsed at eight in the evening on January 10, 1673, and slowly drifted downstream. Huge stone supports were all that was left of the bridge, while the floating remains and pieces of the bridge damaged piers and sank a number of ships in the river port near the present-day parliament building.

The next day a magistrate inspector with several servants and a bailiff went almost 100 kilometres downstream, all the way to Kaunas, but were unable to find any traces of the bridge.

The people of Vilnius finally realised that the bridge was but a scam pulled by the Italians for a lot of money. A student of the Vilnius Academy, Stanisław Samuel Szemet, wrote a satirical poem about the bridge and its construction.

Just one month prior to the disaster, the innovative bridge had been given some promotion abroad. On December 7, 1672, a friend of Bartolomeo Cinachi’s wrote a letter to Ismaël Boulliau (1605–1694), the French astronomer and royal secretary, where he describes the bridge with enthusiasm. He wrote of a bridge over a river 400-feet wide that would demolish earlier bridges every spring, because those were built on pillars resting in the river stream. He said that the new bridge was decorated with stone slabs, its upper part hidden under a wooden cover. 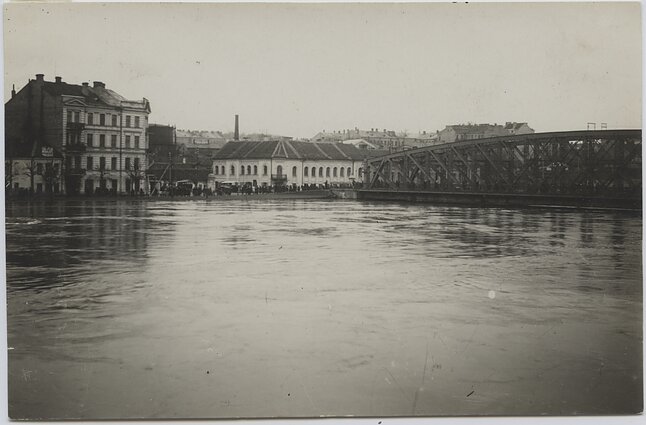 The Green Bridge during the 1931 flood / Lithuanian National Museum

The bridge, the letter went, cost 30,000 złotys to build while around 50,000 złotys was spent on each prior bridge. This was a blatant lie, as the city paid more than 20,000 zlotys for the bridge, thrice its initial budget.

Moreover, the letter claimed that the bridge would have fared better in another city, where the residents would have appreciated the “talent of the inventor”.

A little later the model of the bridge was apparently taken to Gdansk, thanks to Ismaël Boulliau, and remained there for several years. Its fate is unknown.

The architect accuses the city

Giovanni Battista Frediani, the architect of the hapless bridge, defended himself claiming that Vilnius magistracy did not supply building materials, nor remunerated the craftsmen, these being the main reasons behind the delay. The judicial process against him supposedly tarnished his professional reputation. 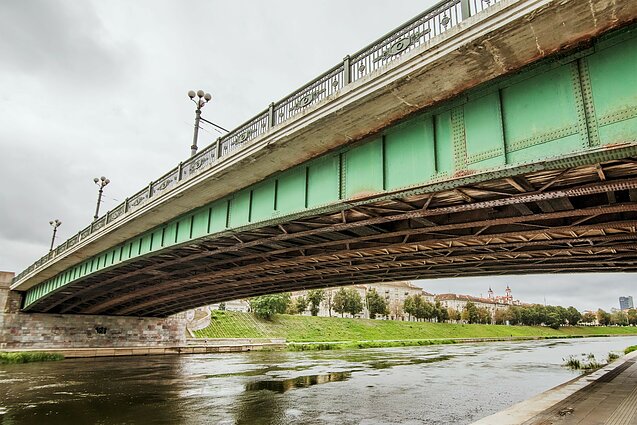 His plan of erecting the single-arch bridge spanning 73 metres may be seemed either as a bold attempt to implement cutting-edge engineering, a reckless experiment, or a successful plot to swindle naïve people.

Not a single bridge of that type had been previously built anywhere in the world. It is highly likely that the peculiarities of the construction rendered the design impossible to implement. It wasn't until the end of the 18th century that single-arched wooden bridges could span more than sixty metres.

The long history of the Green Bridge

Back in 1529, King Sigismund the Old granted the privilege to the Voivode of Vilnius Albertas Goštautas to build a stone bridge there. The bridge was to house merchant shops that could be taxed in order to maintain the bridge. The construction, however, took much longer than expected, mainly due to faulty masonry work performed by an Italian master. As a consequence, the bridge collapsed three times before it was even completed. 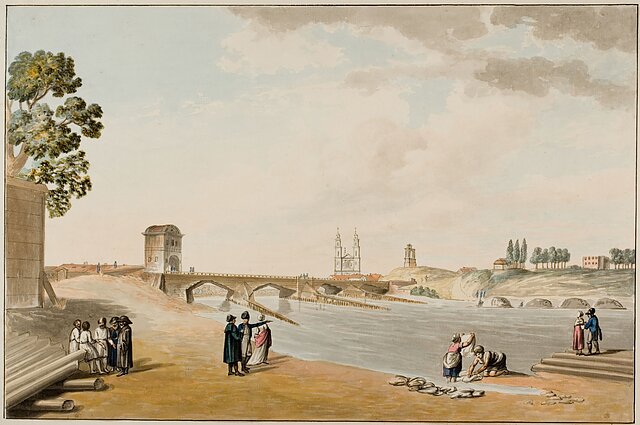 The year 1536 saw another royal privilege, this time issued to Johann Hosius, the son of the castellan of the Vilnius Castle. Johann was given the right to build “the grand stone bridge” across the Neris and collect fees from anyone crossing it.

The bridge was erected, it was most likely made of brick and stone, but little is known about it. A chronicle written by Alessandro Guagnini in 1578 describes the bridge as “stone-made at both ends, huge, covered with shingles, costing a lot of money”. It was destroyed by a fire on July 1, 1610.

In 1631, yet another bridge was completed – only to be destroyed in 1655 by Lithuanian troops fleeing a Muscovite assault. It was rebuilt in 1673, but soon collapsed once again. A bridge built in 1684 survived until 1700, when the stream of a swollen river tore it down.

The story repeated itself in 1761 when the Neris wrecked the main frame of the bridge. This time, the city’s authorities rebuilt it and painted green. It has maintained its Green Bridge name ever since. 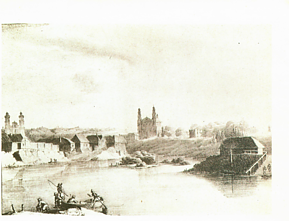 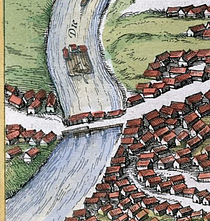 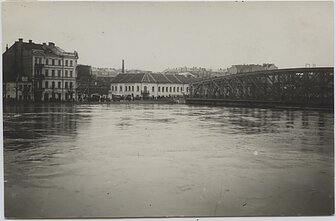 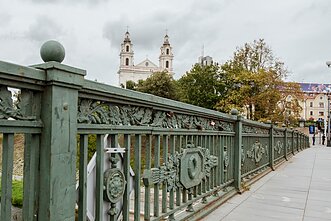 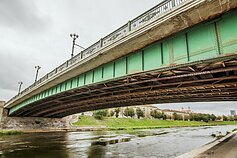 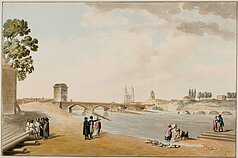 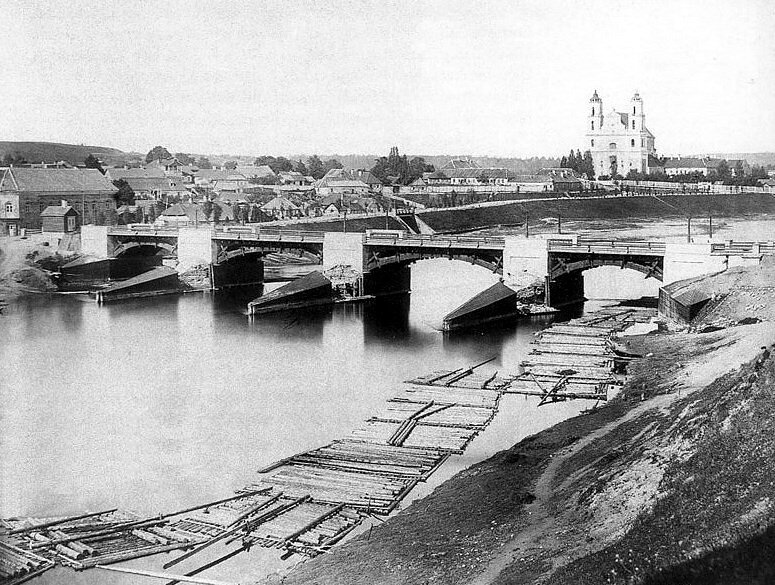 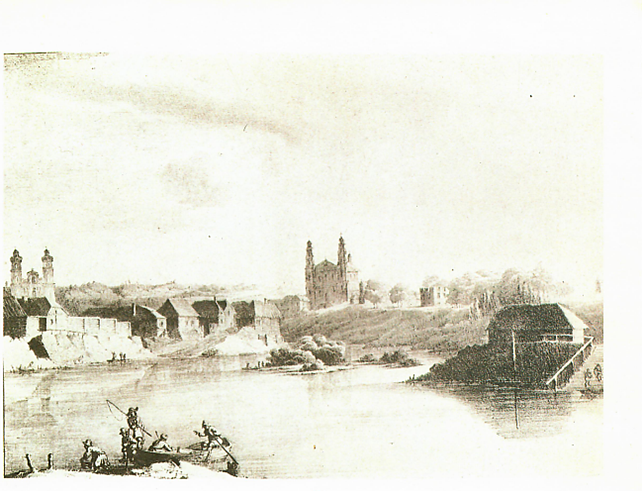 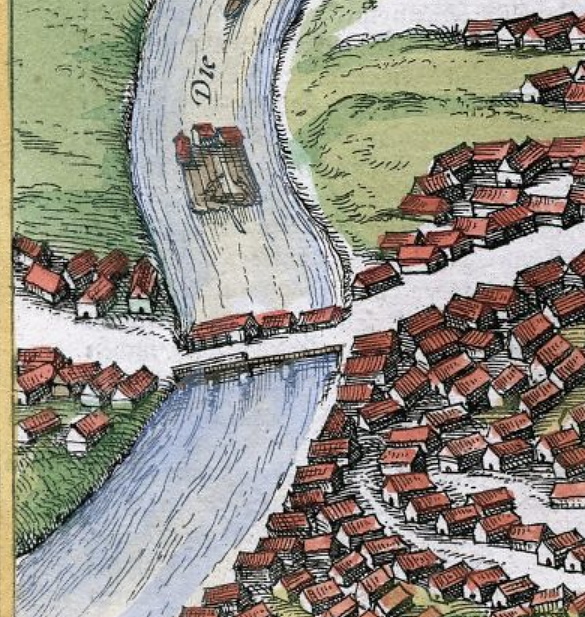 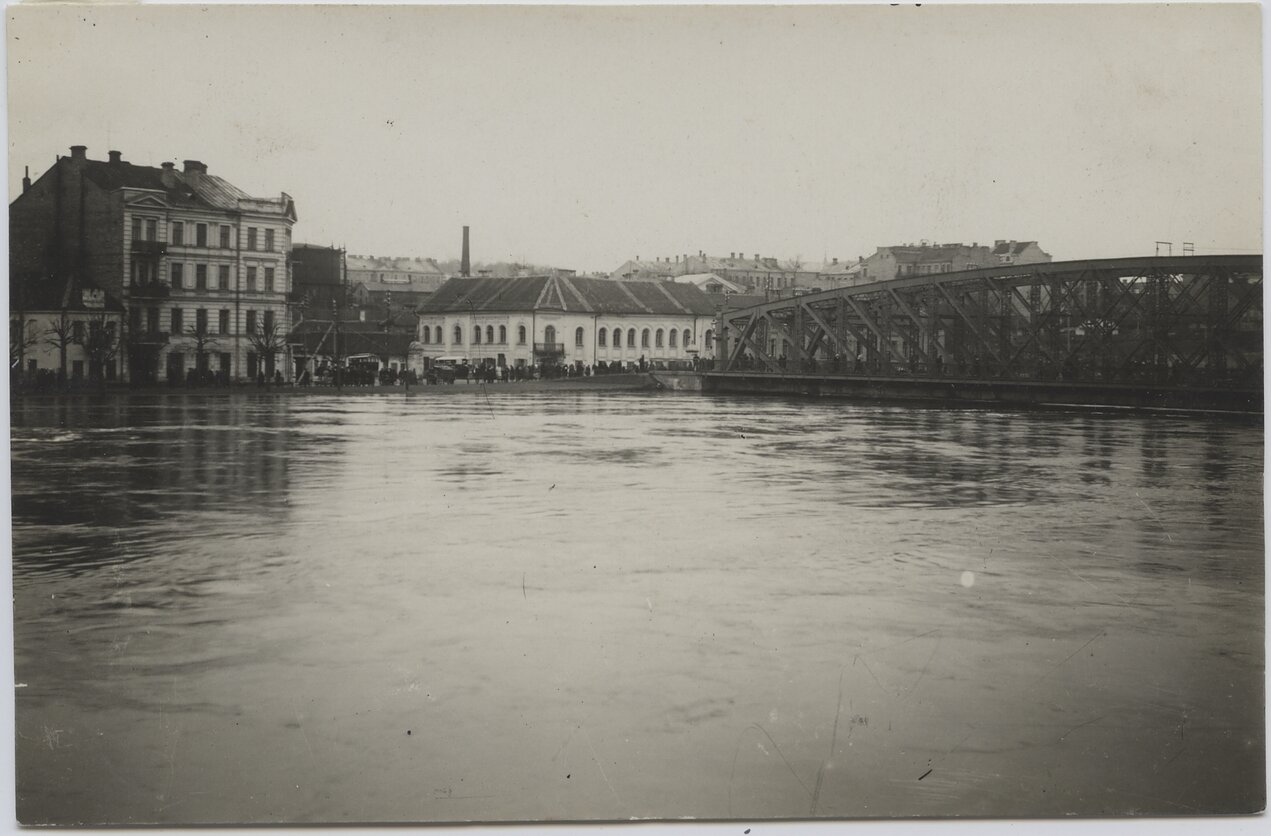 The Green Bridge during the 1931 flood
4 / 7Lithuanian National Museum 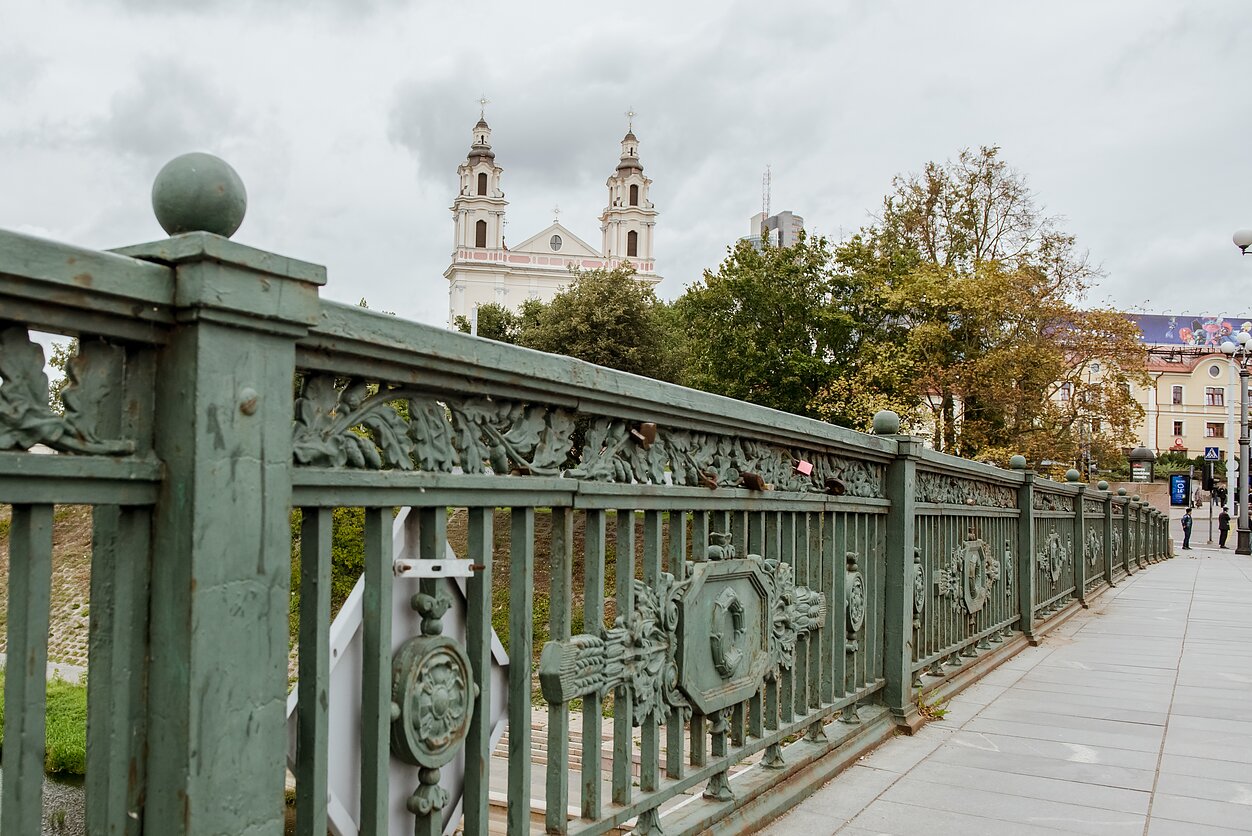 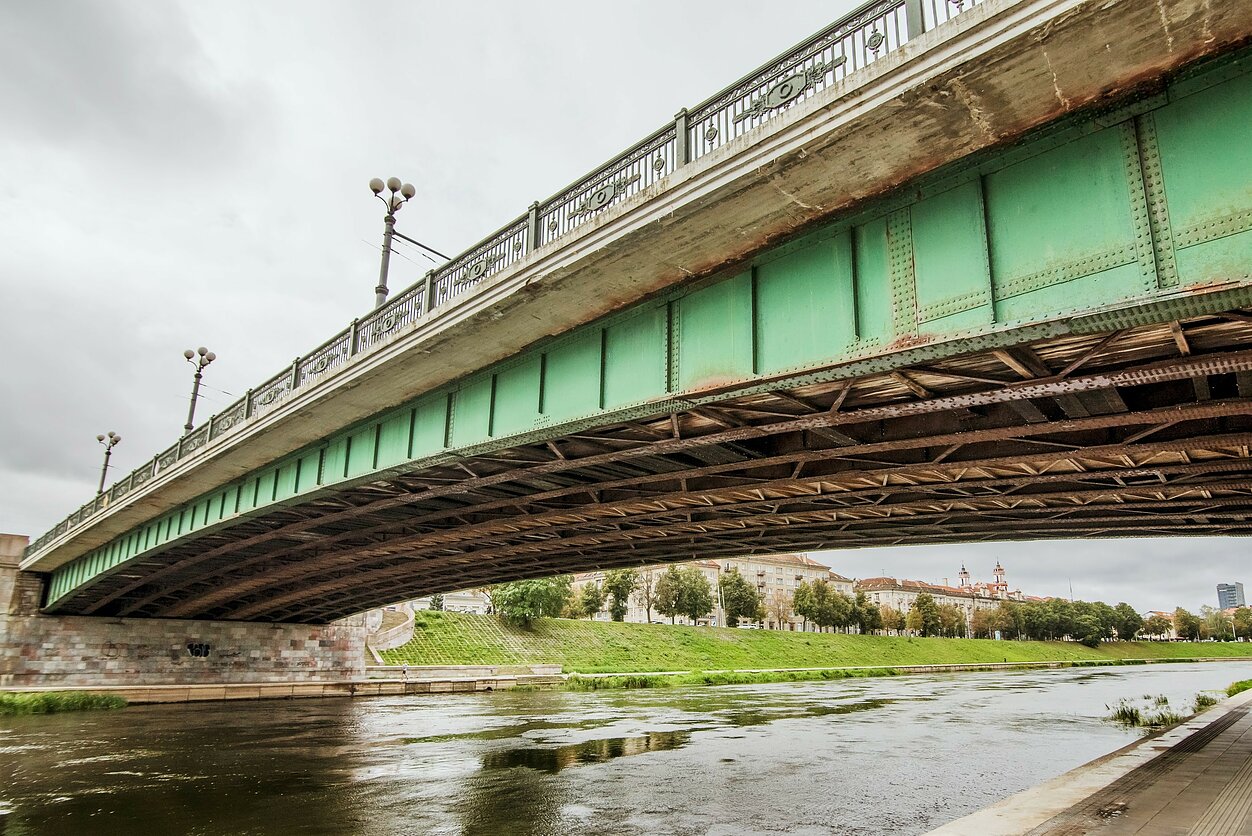 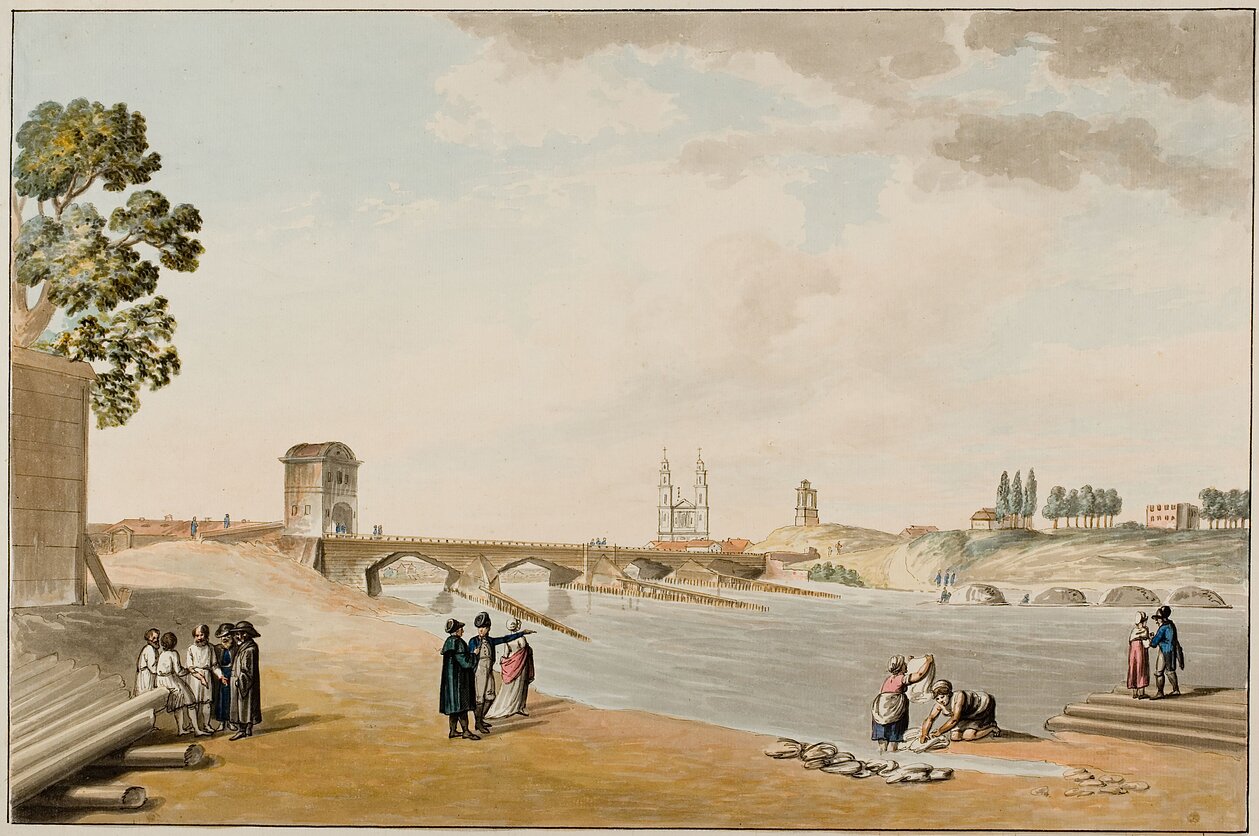