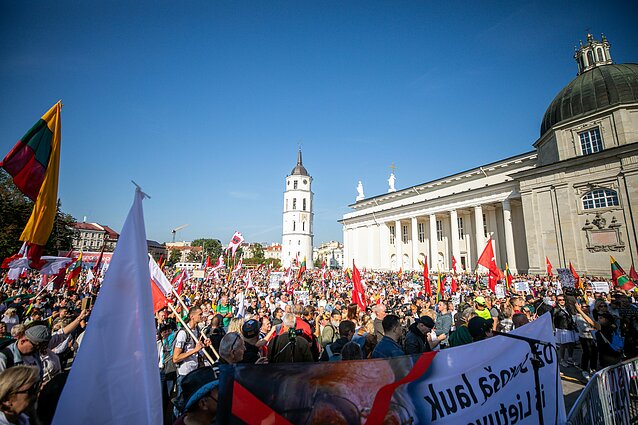 Around 4,500 people gathered in the central Cathedral Square of Vilnius on Friday for a rally against Covid-19 restrictions.

The Lithuanian Family Movement staged the rally to protest against the restrictions for those who do not have immunity certificates, the requirement to wear facemasks in schools and other measures to curb the spread of the pandemic, as well as against an initiative to introduce gender-neutral civil partnership and ratify the Istanbul Convention.

Some demonstrators waved Lithuanian flags and held placards that read “No to animal passports” – in reference to the immunity passport – or “George Soros out of Lithuania”.

Raimondas Grinevičius, the Lithuanian Family Movement's leader, called on the government to cancel the restrictions that are set to take effect next Monday. The new rules will require that people present immunity certificates to access a range of shops and services.

“This is the step to start with, in order to calm down the passions, because Gedimino Avenue may be too small to accommodate all the protesters during our next rally,” he told the crowd. 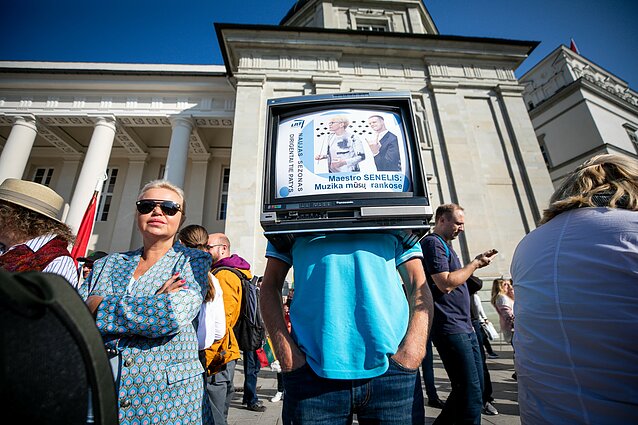 “We have managed to block the partnership bill and had the Istanbul Convention shelved. We chose [to protest] today, September 10, to let the members of the Seimas [parliament] know that we are not going to give up.”

Artūras Orlauskas, another organiser, noted the heavy police presence at the event.

“Despite the hurdles built [by the authorities], we have all gathered here today,” he said.

A pre-recorded video greeting from representatives Fidesz, the party of Hungarian Prime Minister Viktor Orbán, played during the rally, and German politicians from the right-wing AfD party addressed the crowd from the stage.

Police said around 4.500 people gathered in the square, adding that no incidents had been recorded so far.

The organisers said earlier they expected the rally on Cathedral Square to attract between 5,000 and 10,000 people.

One protester, Valdas, said he came because his son, a first-year student, had been “forced” to take the jab to be able to attend lectures.

Gintaras Petrošius believes that issues polarizing the society, such as the immunity certificate or the ratification of the Istanbul Convention, should be put up for referendum.

“This is not an expensive thing to do. Then we will know the opinion of the majority of the people, not a small fraction,” the 45-old-man said.

Rima Junel said she came to the rally because she was opposed to mandatory vaccination and teaching in schools about homosexuality.

“Maybe my views are old-fashioned, but [...] having two moms or two daddies is not acceptable to me,” the 56-year-old woman said.

“I'm not against vaccination in principle, but people should be able to choose it for themselves, rather than being placed in a situation where they just have to get vaccinated,” she added. 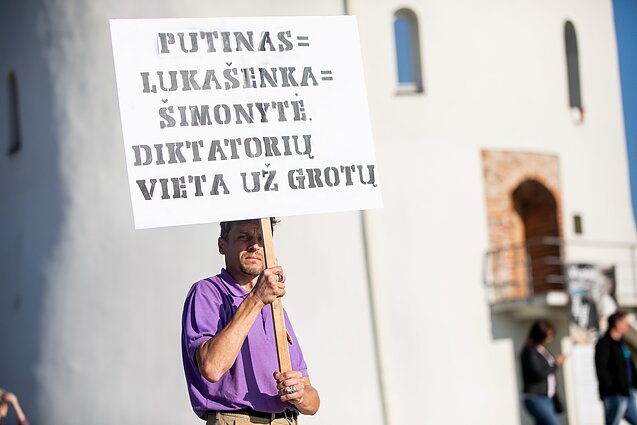 Police said they detained two people during Friday's rally, one of them had “pyrotechnic devices”.

“Officers took away two persons, one of whom had pyrotechnic devices,” Saulius Gagas, the Vilnius county police chief, told reporters. “What devices these are has yet to be established.”

Gagas said the persons had been taken to the courtyard of the nearby Interior Ministry for questioning.

Several people were seen exploding coloured smoke flares in the square just after 13:00.

Gagas said that no other incidents had been recorded at the rally so far.

In the run-up to the rally, more than a dozen police crews could be seen on Cathedral Square, and some sections of Gedimino Avenue were closed.

The organisers sought, but were denied a permit to hold Friday's rally close to the parliament after the August 10 protest there turned into a riot, leading to several dozen arrests and pre-trial investigations. 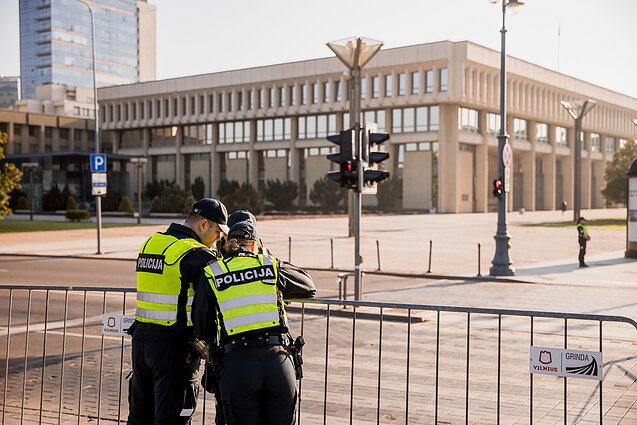 In an effort to ward off any unrest outside the parliament, anti-riot barriers have been erected around the building and extra police officers are on duty in the area. The Lithuanian State Security Department has warned about a heightened risk of violence during protest

Vilnius Municipality authorised the rally on Cathedral Square between 10:30 and 16:00.

The Family Movement earlier called on participants of the rally on Cathedral Square to observe the law and protest peacefully.

On Friday, Grinevičius told the crowd that the protest “is peaceful” and urged them to stay in the square and not to go to the government building down Gedimino Avenue, or to the parliament at the other end of the street.

“There must be no provocations or marches,” he said. “We have no permission for marches. Our rally is peaceful.”

However, a crowd of people have gathered outside the Seimas, bypassing the earlier police cordon at Lukiškės Square, about halfway to the parliament building.

As of Friday evening, several hundred people remained at the parliament. However, they later dispersed. 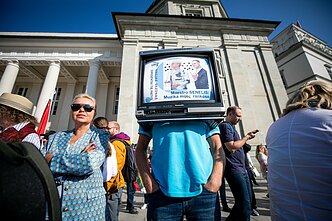 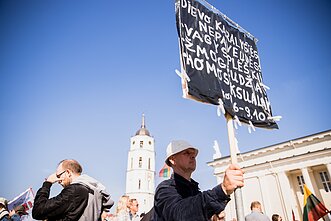 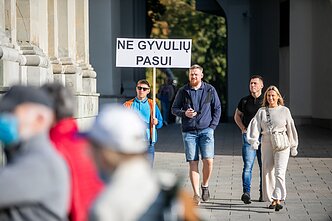 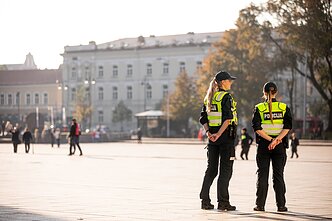 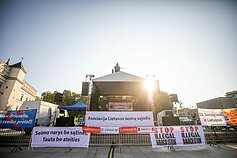 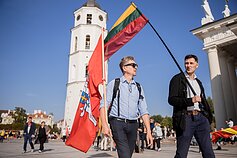 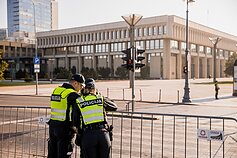