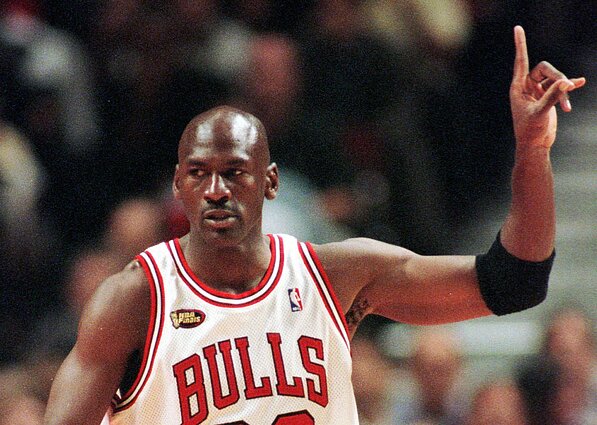 As The Last Dance tops Netflix charts in Lithuania, Giedrimas Jeglinskas, an assistant secretary general at NATO, remembers the heyday of the NBA in the 1990s. For us in the so-called ‘post-Soviet’ space, he writes, the Bulls were a symbol of the post-Cold War wave of freedom, democratisation and liberalism. But the world has changed.

The Last Dance is a majestic tribute to Michael Jordan and the Chicago Bulls of the 1990s. It is also a great lockdown gift by Netflix to the generation that came of age in the 90s.

As a teenager then, also an avid fanatic of basketball in the newly independent Lithuania, I remember vividly waking up in the middle of the night to watch MJ dominate the NBA Finals year after year.

The documentary succeeds for a number of reasons, but not least because it uncovers Michael Jordan as a complex leader. A display of unrelenting willpower, laser-sharp focus on goals, monomaniacal competitiveness is balanced with an alleged gambling problem, bully-like behavior toward his teammates, and sheer arrogance.

Jordan’s complexity in the film, though, goes hand in hand with complexity of every Bull on the team, masterfully interlinking the Balkans wars (Toni Kukoč), celebrity extravagance (Dennis Rodman), adult supervision (coach Phil Jackson), interpersonal relationships (all) and more. No matter how great Jordan was, we are left with a clear thesis that winning is contextual and teams matter.

The outcome of the Bulls dynamic, however, is as obvious as we know it – the legend is made, pierced with multiple Hero’s Journeys, the myth of dominance, the culture of winning, and the symbol of American power. 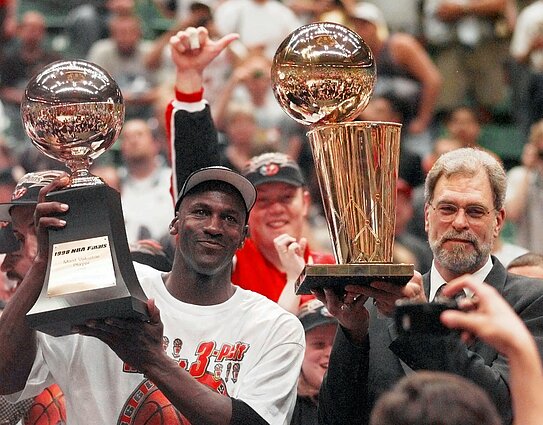 As kids, we were in absolute awe of MJ’s game. As we watched the Bulls, it was all about basketball, about entering the arena, and winning, we had little insight of the underlying team dynamic or personality clashes.

The world has changed, though. Not just for the Bulls, who continue to struggle in the NBA, but also for America in a broader sense.

Looking back, for us in the so-called ‘post-Soviet’ space, the Bulls of the 90s were a symbol of the post-Cold War wave of freedom, democratisation and liberalism.

Jordan has won his first championship in June of 1991, only five months after the Soviet troops attempted to squash the newly resurrected nation of Lithuania.

The Last Dance, justifiably and prosaically, focuses on the Bulls as the central institution of the 1990s, the World Champions in basketball, as the winners are called. Yet the world was always much more than just the NBA.

With a hindsight, we now know that the 1990s were probably the only recent historical period of unfettered US hegemony. A time of hope and a time when history was supposed to end. 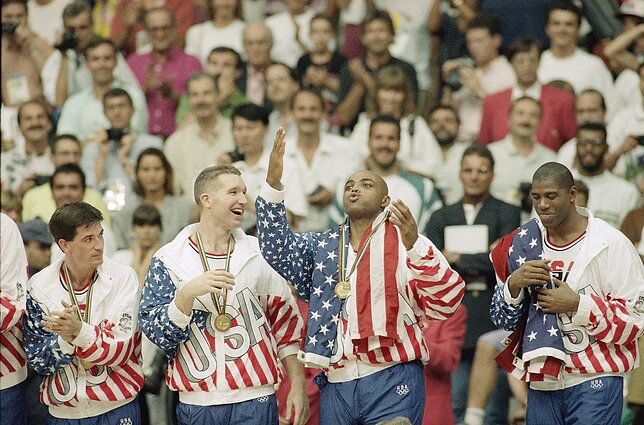 The US Dream Team at the 1992 Olympics in Barcelona / AP

With no social media, Michael Jordan’s game was exported through traditional TV arrangements to multiple countries around the world, enamouring kids and adults alike. The NBA or the 1992 Dream Team, led by Jordan, was a soft power megaplay of the post-Cold War landscape, dominating and sweeping in its entirety.

Hence, it is a rather curious feeling to binge-watch The Last Dance and ponder about America and its role in the world, now and then.

For all the good and bad things that took place in the US in the 90s, America was always perceived as a beacon of hope, a land of opportunities, a defender of freedom, and a showforce of popular culture, of which Jordan was the prime celebrity.

Right after the Bulls era, in 1999, I had an honour to enter the US Military Academy at West Point – arguably, the most American of America’s institutions. As a Lithuanian, I tend to (perhaps naively) believe I allowed the American ‘kool-aid’ permeate my world view. 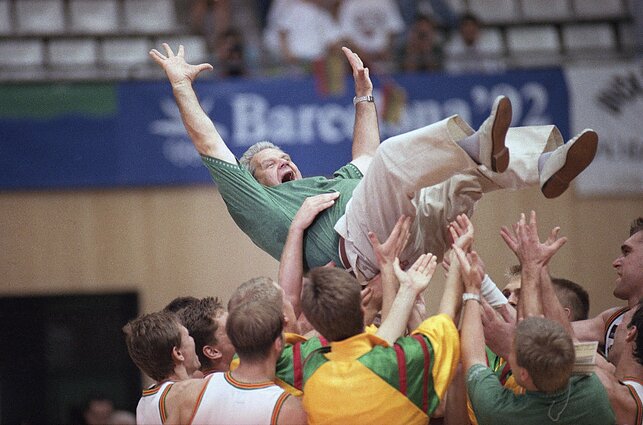 But I have to admit, the feeling of everything is possible and the narrative of great American power was deeply alluring and consoling for a future military officer of a small Eastern European country.

In those days, the great American storytelling, and the Bulls were a key part of it, was pre-packaged and ready for export all around the world.

The Last Dance is a trip down memory lane and a timely reminder of the early days of modern globalisation. In the 90s, China’s economic miracle was accelerating, supply chains were expanding globally, the US dollar rightfully assuming the throne of global reserve currency, and, with that, ensuring affordable Nike and Air Jordan sneakers to millions of consumers in the West.

The 90s of big dreams rebranded MJ into Air Jordan, while the Dot Com inflated the technology boom in the decade’s final year. The air was crisp with optimism.

And, therefore, The Last Dance is also a historical vision of the world that will never be.

Since the Global Financial Crisis of 2008, globalisation, at least of tangible traded goods, has reversed its long term trend. The Covid-19 pandemic has further dented the prospects of deeper globalisation and has accelerated the inward trends of isolationism and nationalism.

De-globalisation might be the megatrend to watch, yet the US remains an essential provider of hope in many pockets of the world.

The NBA or the 1992 Dream Team, led by Jordan, was a soft power megaplay of the post-Cold War landscape, dominating and sweeping in its entirety.

The Baltic States – Estonia, Latvia, and Lithuania – and other Central and Eastern European nations continue to cherish the Michael Jordan-like clarity of vision, in which America’s leadership is indispensable.

At the very end of The Last Dance, when all six championships are won, Jordan admits that the Bulls management could have put together a team to go for the seventh title, but chose not to.

We will never know what could have happened and there is no point in arguing about it. Yet, as we draw parallels to the hegemonic US leadership of the 90s, it is becoming increasingly clear that the continuation of such leadership is desperately needed, especially in times of great volatility and uncertainty.

The Last Dance is an inspirational story, where the narrative projects the viewer into a rethink of one’s life and the role of the US in the world.

The powerful storytelling that comes from American shores continues to attract the best talent. The innovative force of the American society, reflected through exponential technologies led by US firms, remains intact.

The soft power, mostly through culture and entertainment, but more so through opportunity, is, arguably, as great as it ever was. Call me naive or biased, but this leads to a thought that the United States is yet to have its last dance.

Giedrimas Jeglinskas is Assistant Secretary General at NATO and a former deputy minister of defence of Lithuania. 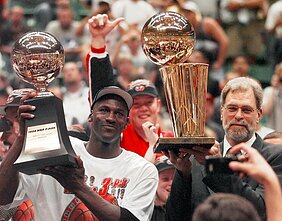 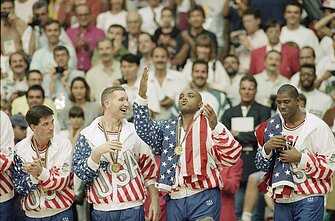 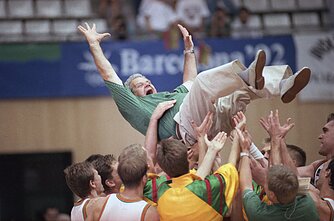 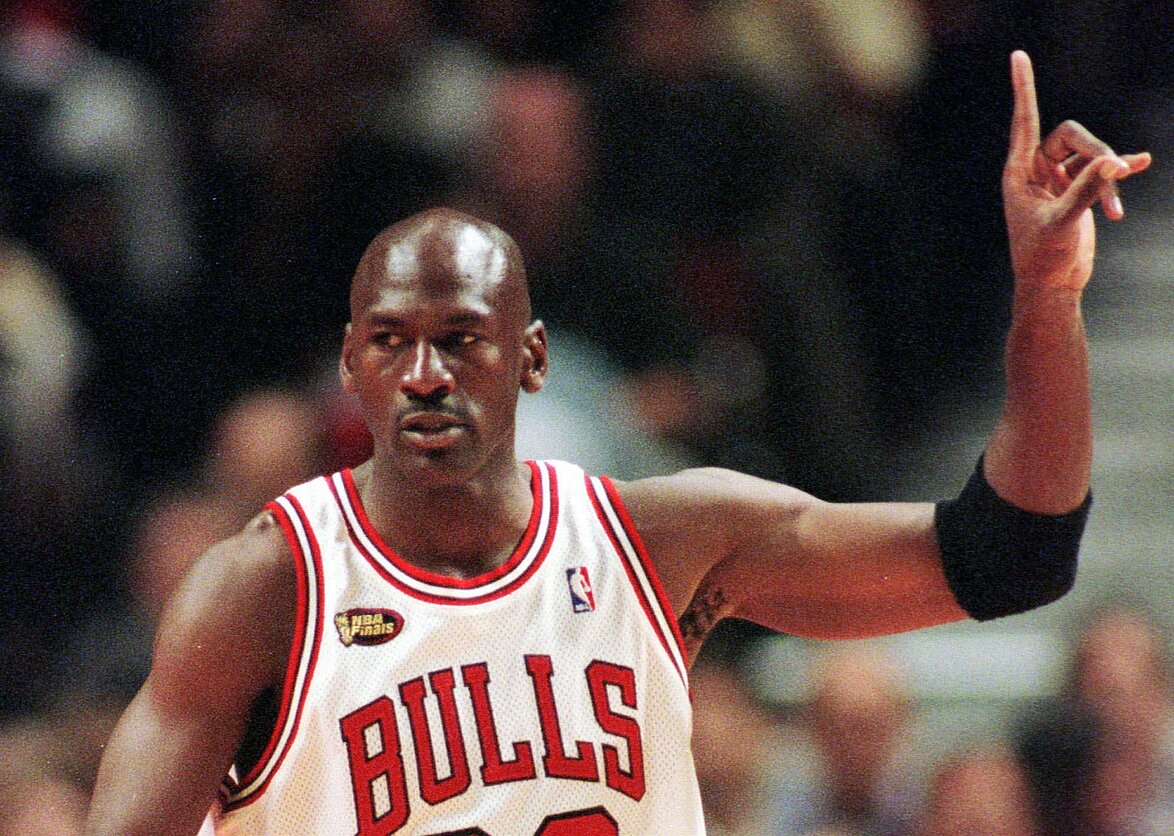 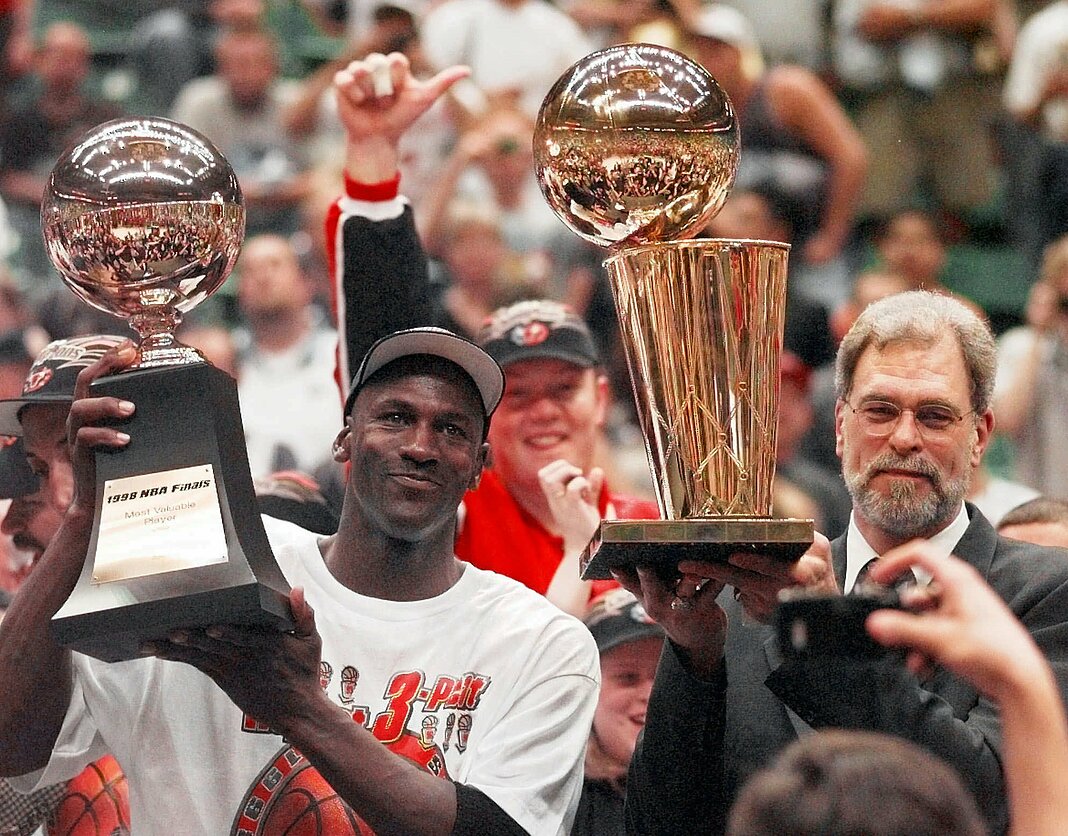 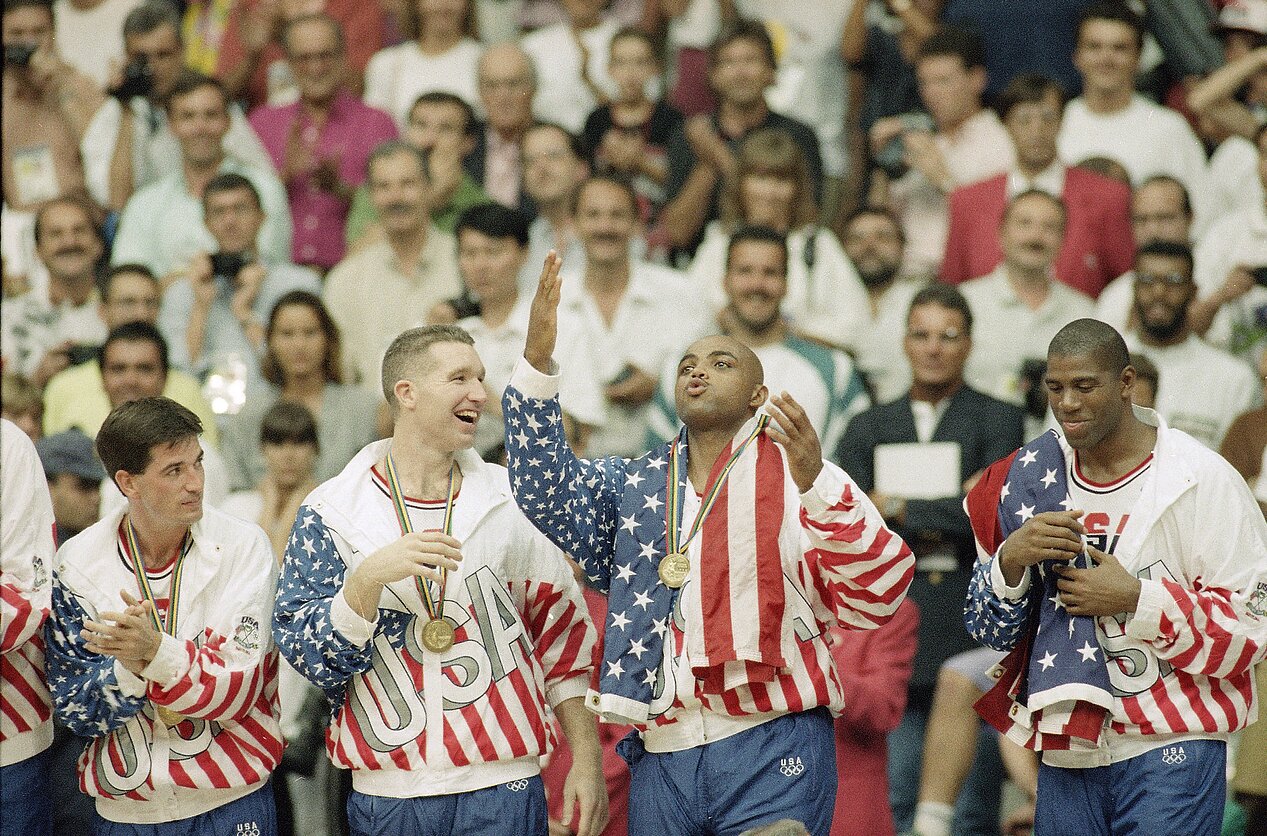 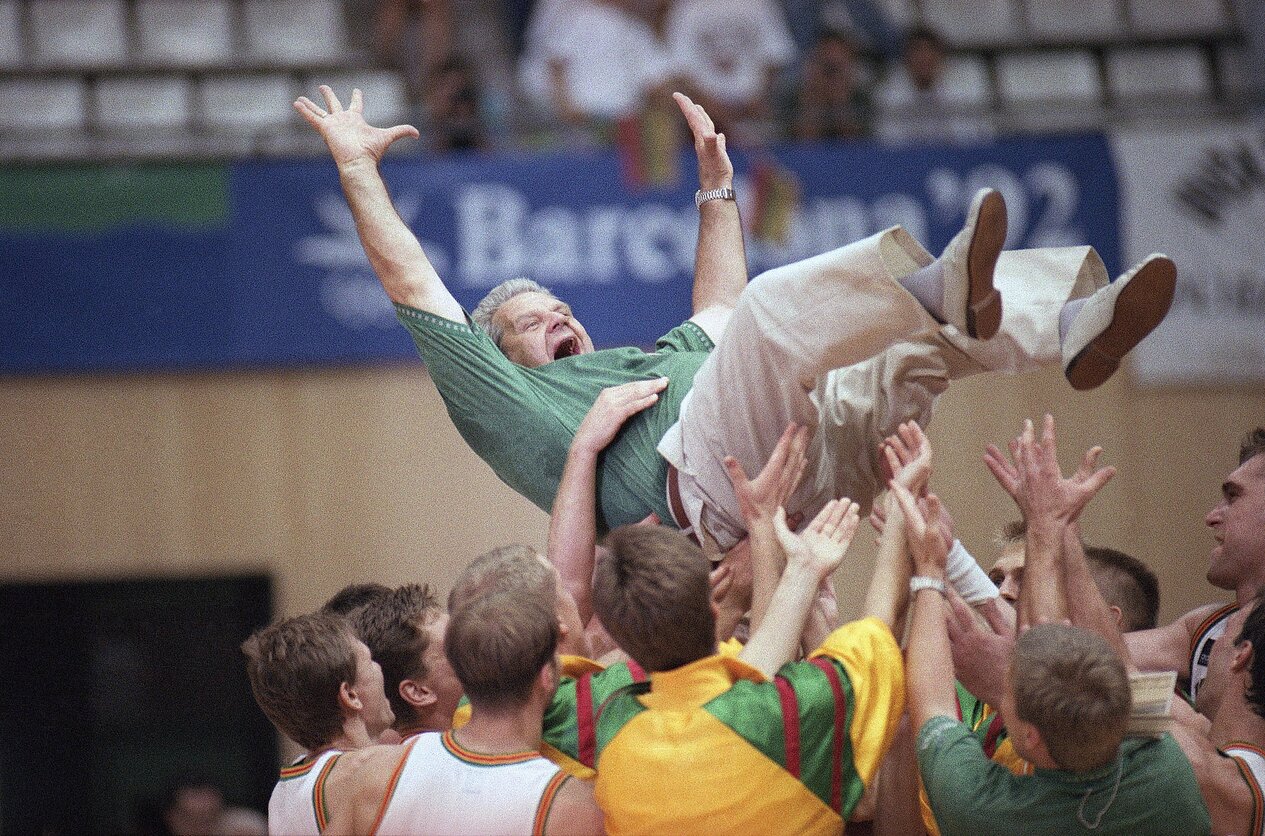