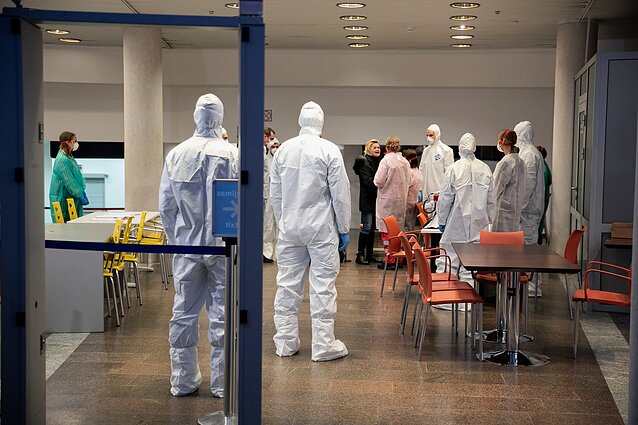 Drive-in coronavirus testing stations will open in ten Lithuanian municipalities, the Health Ministry said on Monday. Patients will not have to leave their cars to be tested.

The stations will be set up in Vilnius, Kaunas, Klaipėda, Šiauliai, Panevėžys, Marijampolė, Tauragė, Telšiai, Alytus and Utena. The locations will be decided by the municipalities.

"Following consultations with specialists, we are widening access to testing," said Health Minister Aurelijus Veryga. "It means that people will be able to drive up to the stations across the country and after the test is done, wait for the results at home and not at the hospital."

The ministry asks anyone who develops a sudden onset of fever, cough or shortness of breath within 14 days after returning from a foreign trip or having been exposed to someone who may have the virus, to first call the 1808 hotline number.

The hotline operator will decide whether the person needs to tested for the coronavirus.

The patient will be asked if he or she can drive up to the mobile station with his or her own car. If they can, they will be contacted by the station's coordinator to arrange the time and place.

Municipalities will have to arrange transportation for those who will not be able to come on their own. 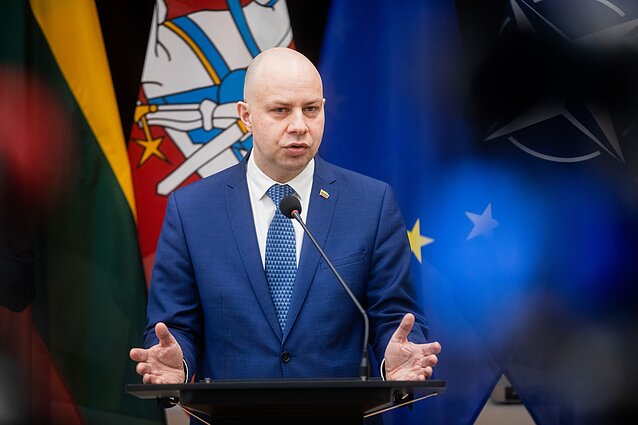 At the station, people will have to stay in their cars with windows closed. They will then be advised on how the swabbing will be performed.

Everyone is required to have their ID document and a sheet of A4 paper with their mobile phone number written on it. The number will be used to contact the person and verify their personal information.

After the compelting the test, the patient will have to go home, self-isolate and wait for the result. If needed, they will be taken to hospital in an ambulance.

According to the ministry, using taxis or public transport to reach the testing stations is not allowed.

Total number of coronavirus cases in Lithuania rises to 17

Two new coronavirus cases were confirmed in Lithuania in the early hours of Monday, as well as three further cases on Monday afternoon, brining the total number in the country to 17, the Health Ministry said.

One of the initial two people diagnosed on Monday with Covid-19 has recently returned from Spain and the other one returned from Germany. They are both isolated and undergoing treatment at Santara Clinics in Vilnius.

All three have recently returned from abroad – two from Austria and one from the Dominican Republic. This brings Lithuania's coronavirus case count to 17 in total, all of them imported from abroad.

“The first patient has already recovered and been released home,” the ministry said.

Lithuania was placed under quarantine on Monday midnight and bans foreigners from entering. Foreign citizen travelling to other countries via Lithuania still have the right to cross the country's territory in transit over the next three days until Wednesday.

Lithuania's first Covid-19 patient was diagnosed with the disease on February 28. 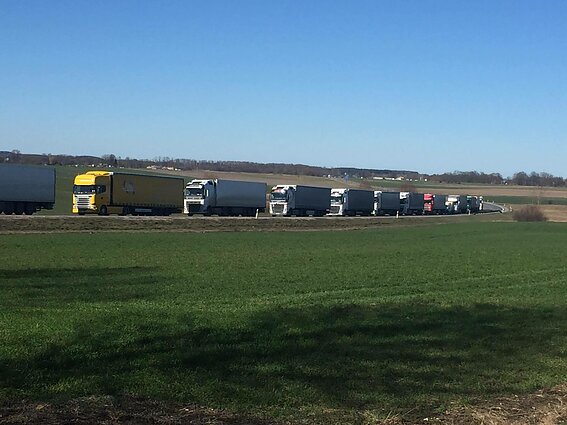 Some 2,000 Lithuanian citizens have told the country's embassies that they're unable to return to Lithuania, Foreign Minister Linas Linkevičius said on Monday, adding that the government may charter commercial flights to bring them home.

Around 1,000 of those unable to return are stranded in Spain, according to the ministry. The Lithuanian authorities are now considered chartering commercial flights to Spain, Germany and France to bring the citizens back to Lithuania.

Convoy of Baltic cars to move through Poland

Meanwhile, over 400 Estonian, Latvian and Lithuanian cars have registered to cross Poland in an organised convoy on Monday, Lithuanian President Gitanas Nausėda said.

"Lithuanian, Latvian and Estonian citizens who are currently on the German-Polish border will today move home in a Lithuanian-organised convoy," the president posted on Facebook, adding that 430 cars have registered according to the Lithuanian Foreign Ministry.

Read more: Wizz Air suspending all flights to and from Lithuania

Nausėda said on Monday he plans to discuss smooth return of Baltic citizens home with the Latvian and Estonian leaders.

Poland closed its borders to foreigners on Sunday midnight to stop the spread of the coronavirus. Lithuania had asked Poland to create a temporary humanitarian corridor to allow Lithuanians to come back home.

"There is no guarantee, but the search [for possible options] is ongoing. Last night, we received a more detailed explanation of what steps could be taken [...[. Maybe some people will be able to travel in a convoy of cars [...]. Another option could be to arrange a train. We are still holding talks and waiting for a decision from the Polish government," he said.

Talks with Poland is ongoing, but there are no practical decisions yet, according to the minister.

Lithuania, Latvia and Estonia have set up a joint task group to deal with the problem, because Estonian and Latvian nationals cannot return home via Poland either, he said. 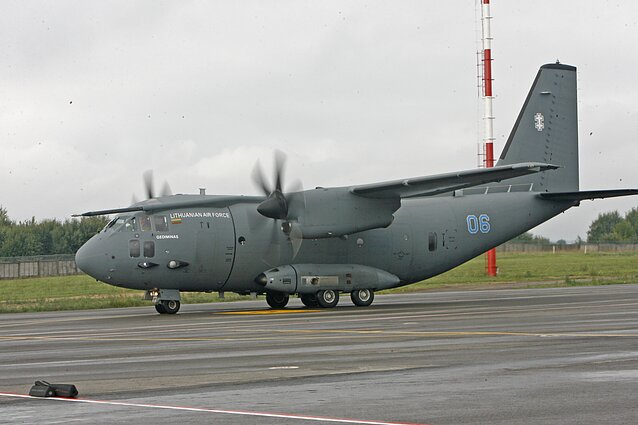 Stranded Lithuanians to be flown home on an air force plane

Poland on Sunday night allowed a group of Lithuanians stranded on the German-Polish to cross the country. Meanwhile, a Lithuanian Air Force C-27J Spartan will bring another group home, representatives of the Lithuanian government said.

"Thirty to 35 stranded Lithuanians will be flown home [from Berlin] on a Spartan tomorrow morning," Prime Minister Saulius Skvernelis posted on Facebook on Sunday.

Situation at the Lithuanian border: transiting cars allowed in, foreigners turned back

After Lithuania closed its borders to foreigners on Monday, one of the first vehicles stopped at Lithuania's northern border with Latvia was a van with Ukrainian registration plates. Inside, people were returning home to Ukraine. As they were due to transit Lithuania and Belarus on their way back, the vehicle was allowed entry.

Smolin and his colleagues work in Norway and were on their way back to Vilnius.

"We left out vehicles in Sweden as we tried to go via Denmark, Germany and Poland, but Denmark closed the border completely," he said. "We then turned around, drove to Stockholm and then flew to Latvia."

Smolin and the other men were forced to take their luggage and continue their trip to Vilnius by foot, and the taxi was forced to turn around and return to Latvia.

An Estonian citizen also had to end his trip to Lithuania at the Saločiai border post with Latvia.

"I am going to Šalcininkai to collect my workers as there are no buses. I will collect my people and we will return to Estonia," Denis Komar told BNS.

However, the Estonian owner of a construction company was forced to turn around and leave some 30 minutes later.

Lithuania allows its citizens to come home but they must self-isolate for 14 days. Lorry drivers as well as foreign citizens who permanently reside in Lithuania, diplomats and NATO troops are also allowed to enter the country. 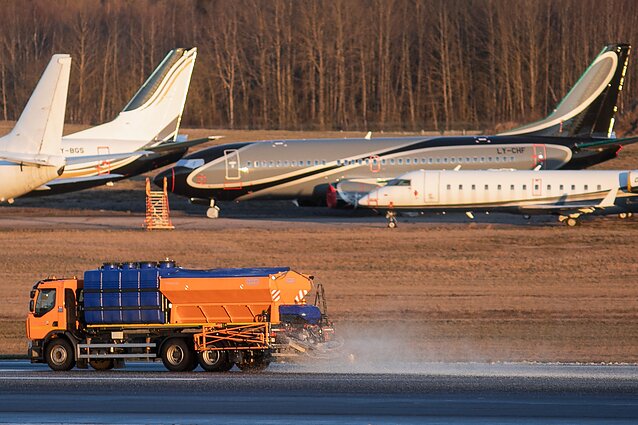 Six Lithuanian citizens were not allowed to fly out of Vilnius and Kaunas Airports from midnight to Monday morning, and one Norwegian citizen was not allowed to enter the country, according to the spokesman at the State Border Guard Service (VSAT), Giedrius Misutis.

The Norwegian citizen flew back on the same plane, he said, adding that around a half of all planned flights from Lithuania have been cancelled.

Lithuanian citizens are banned from leaving, except for those who work or live abroad or have been permitted to leave by the VSAT commander. 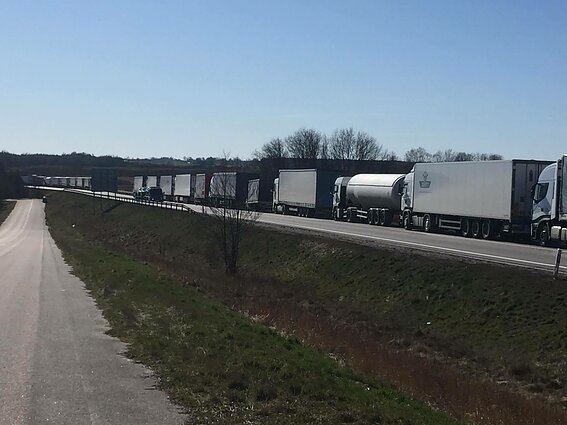 Queues on the Lithuanian-Polish border

There was a 24-kilometre queue at the Kalvarija border checkpoint on Sunday night, according to the police.

"Polish border guards and other institutions are carrying out very thorough checks of all drivers and cars, and this is also why the queue forms, we are trying to coordinate these issues," Liubajevas said.

There were no queues on the Latvian border on Monday morning, he added.

Meanwhile, "queues are forming only from the Belarusian side towards Medininkai," said Liubajevas.

Based on information from the Directorate of Border Crossing Infrastructure, a queue of 218 commercial vehicles willing to leave Lithuania was also reported at the Medininkai border crossing point on Monday morning. 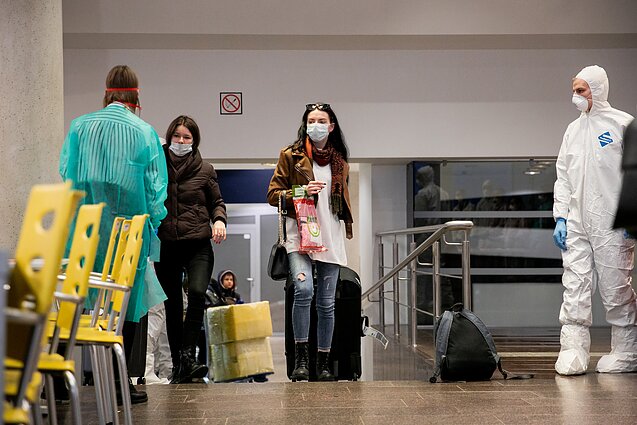 "We aren't closing our airspace"

According to Mindaugas Gustys, CEO of the state-owned air navigatioon service Oro Navigacija, Lithuania handled 18 percent less flights on Sunday compared with a year ago.

"The biggest change will come this week, because Air Baltic, LOT, SAS and Wizz Air keep cancelling flights," he told BNS. "We are going to see a much steeper decline."

"Transit flight will continue. We aren't closing our airspace," said Gustys. "The question is how many flights to and from Lithuania we'll have. But if there's at least one flight, we must [continue] working," he added.

According to Oro Navigacija, the total number of flights handled in Lithuanian airspace fell by 2.5 percent on March 1–15 year-on-year to 8,800 and the number of transit flights alone was down by 4 percent to 6,500 flights.

The sharpest decline was registered on March 14 and 15, when the number of flights dropped by 15-18 percent, the company told BNS.

Lithuanian parliament to pass coronavirus bills, then go into quarantine

The Lithuanian parliament will hold plenary meetings on Tuesday to pass legislation drafted by the government to tackle the coronavirus crisis.

"Only emergency-related bills will be submitted tomorrow. Committees will also convene in between the plenary meetings," Viktoras Pranckietis, the speaker of the Seimas, told BNS.

"By the evening, we expect to pass all the draft legislation tabled by the government," he added.

All bills will put before the parliament under an emergency procedure, which means that they will be debated and voted on on the same day, Rima Baškienė, the vice-speaker of the Seimas, said. 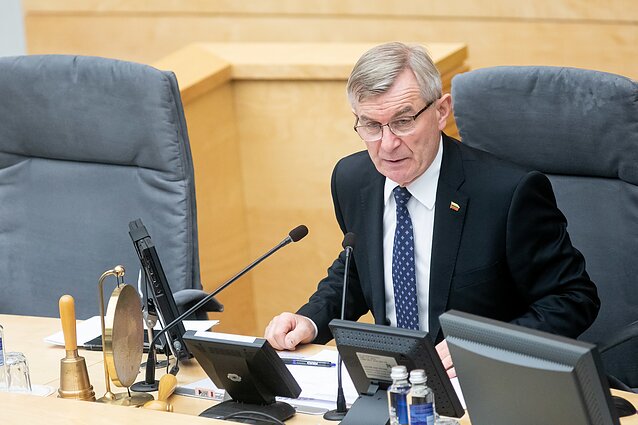 The government decided on Monday to ask the Seimas to amend the 2020 budget law to increase its net borrowing limit from 904.6 million to 5.401 billion euros.

The parliament will also decide whether to allow municipal councils to hold their meetings remotely under quarantine conditions and whether to simplifying public procurement procedures due to the state of emergency declared over the coronavirus outbreak.

According to Pranckietis, the Seimas also plans to amend its statute on Tuesday to allow its committees to work remotely.

No more plenary sessions are scheduled until the nationwide quarantine, in place since midnight on Monday, is over. 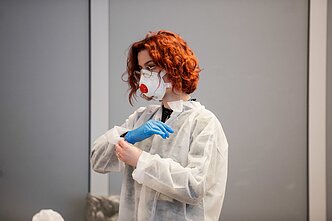 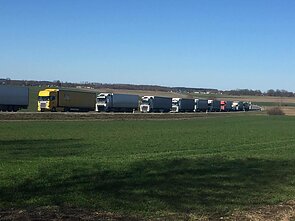 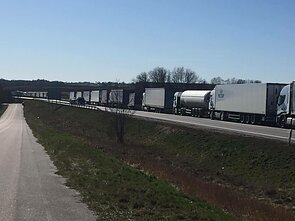 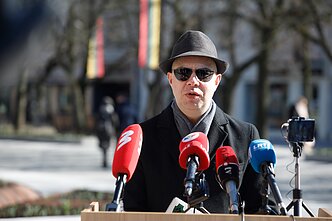 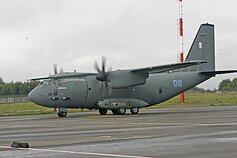 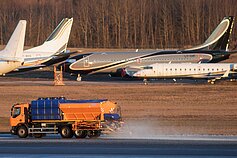 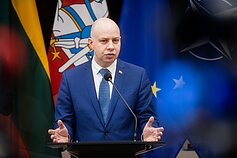 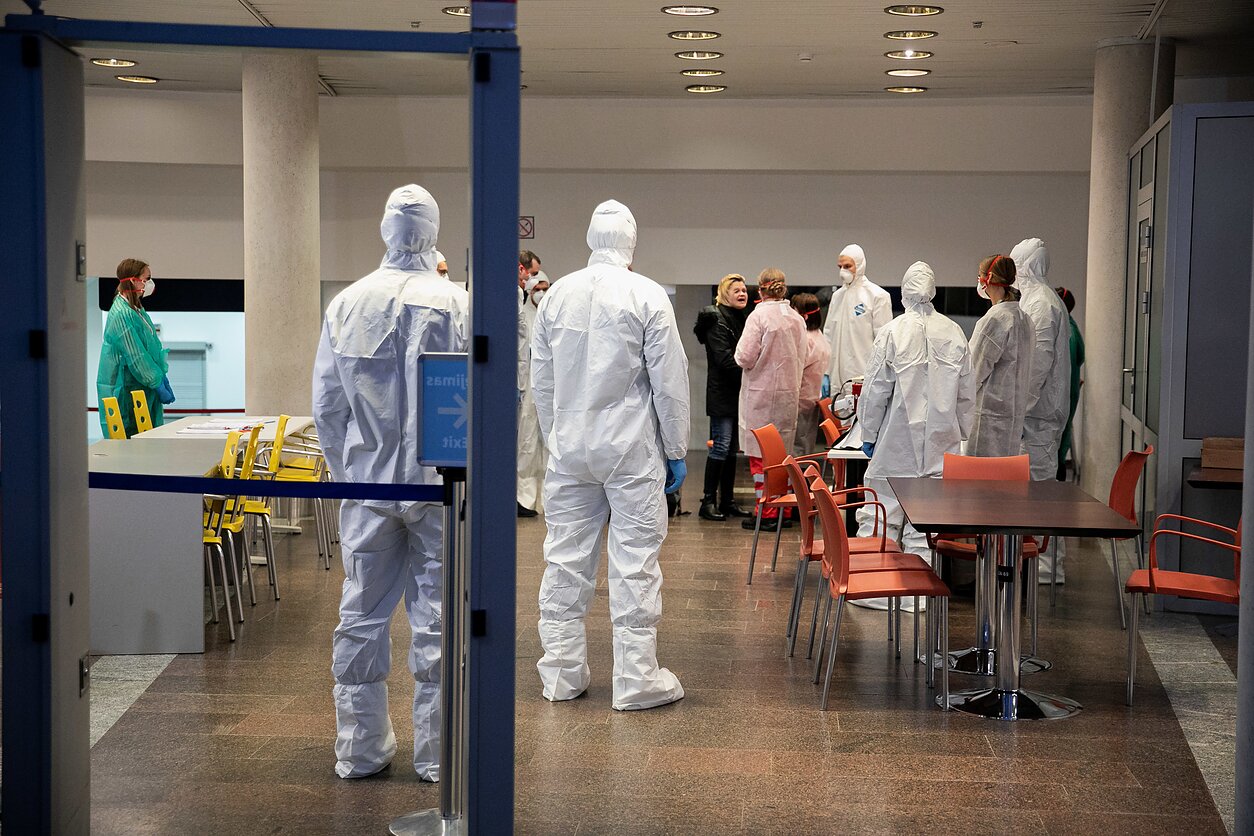 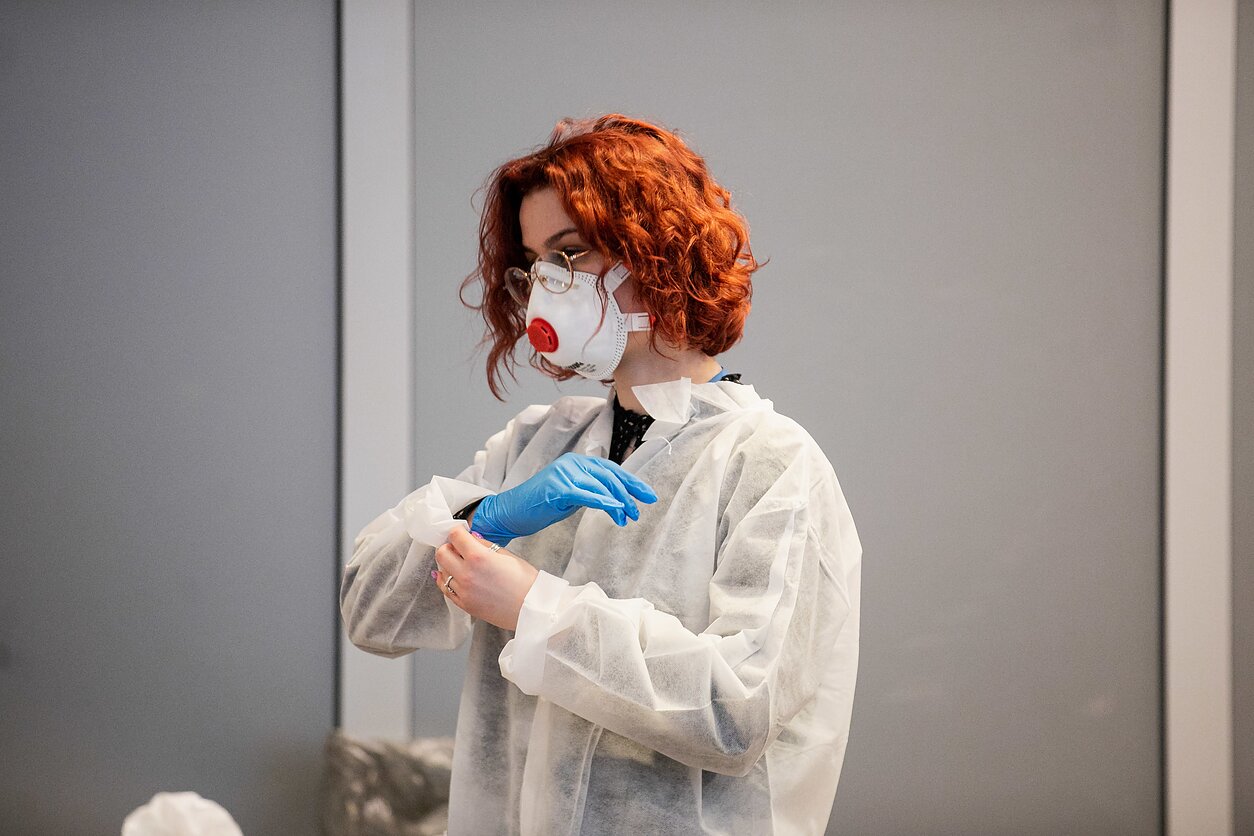 Lithuania has been put under quarantine
2 / 10D. Umbrasas/LRT 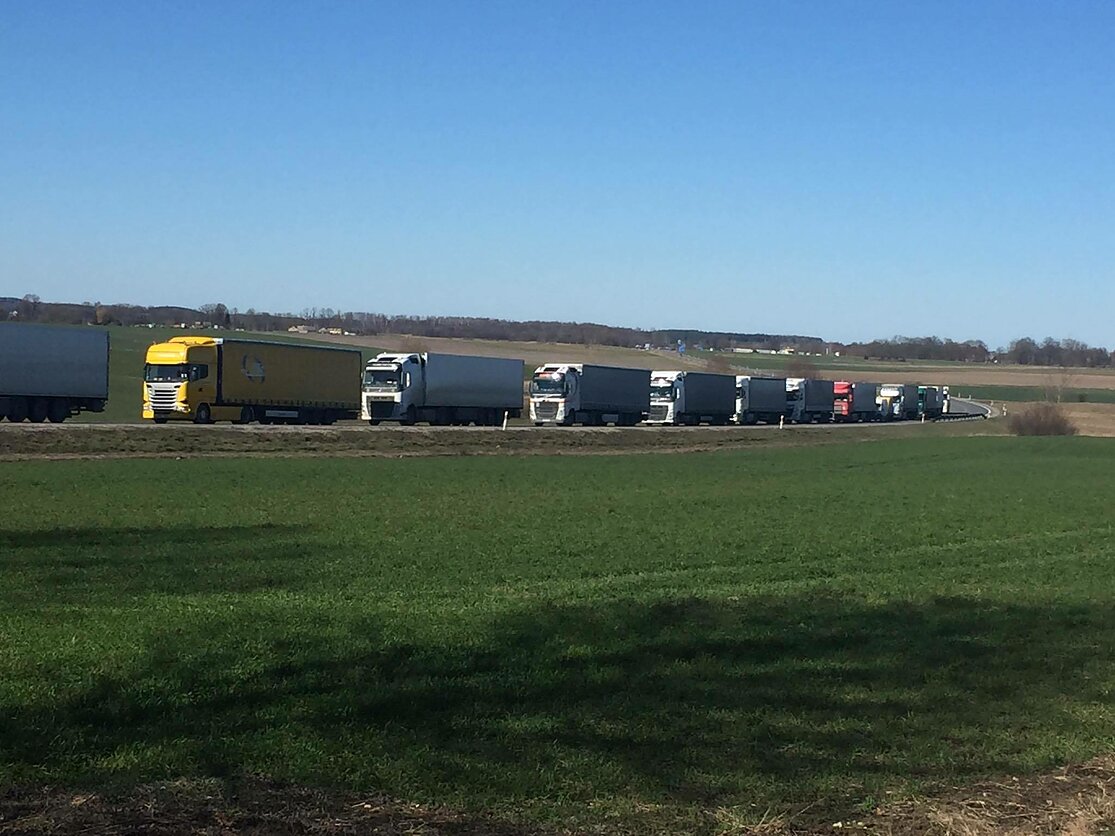 Queues of lorries have formed on the Lithuanian-Polish border
3 / 10 Image submitted by a LRT.lt reader 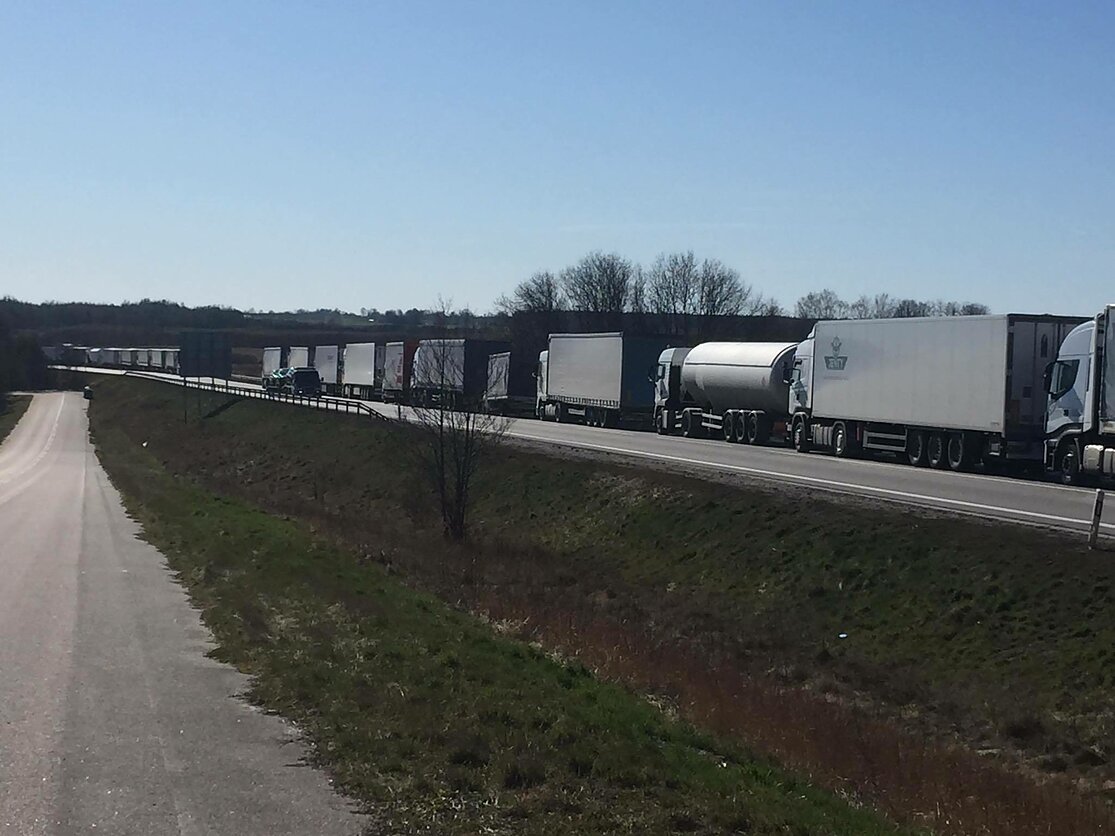 Queues of lorries have formed on the Lithuanian-Polish border
4 / 10 Image submitted by a LRT.lt reader 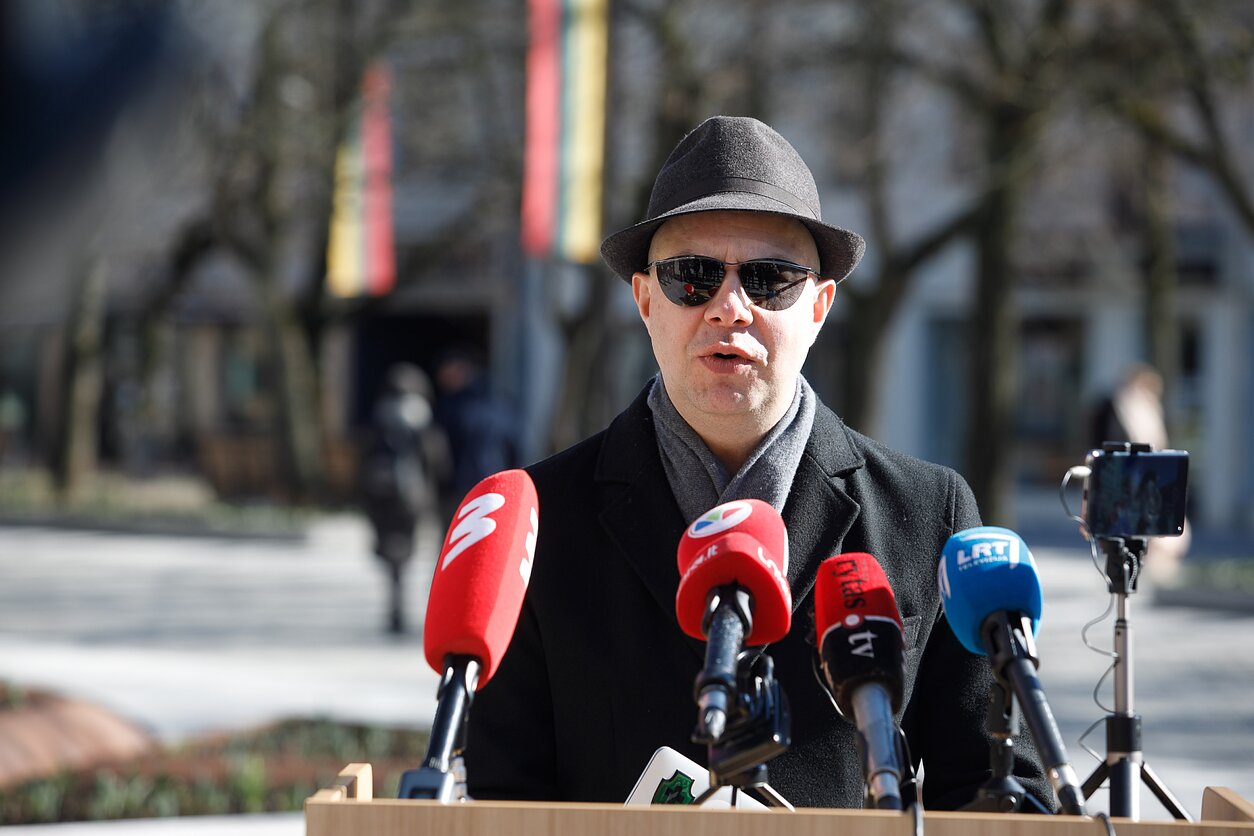 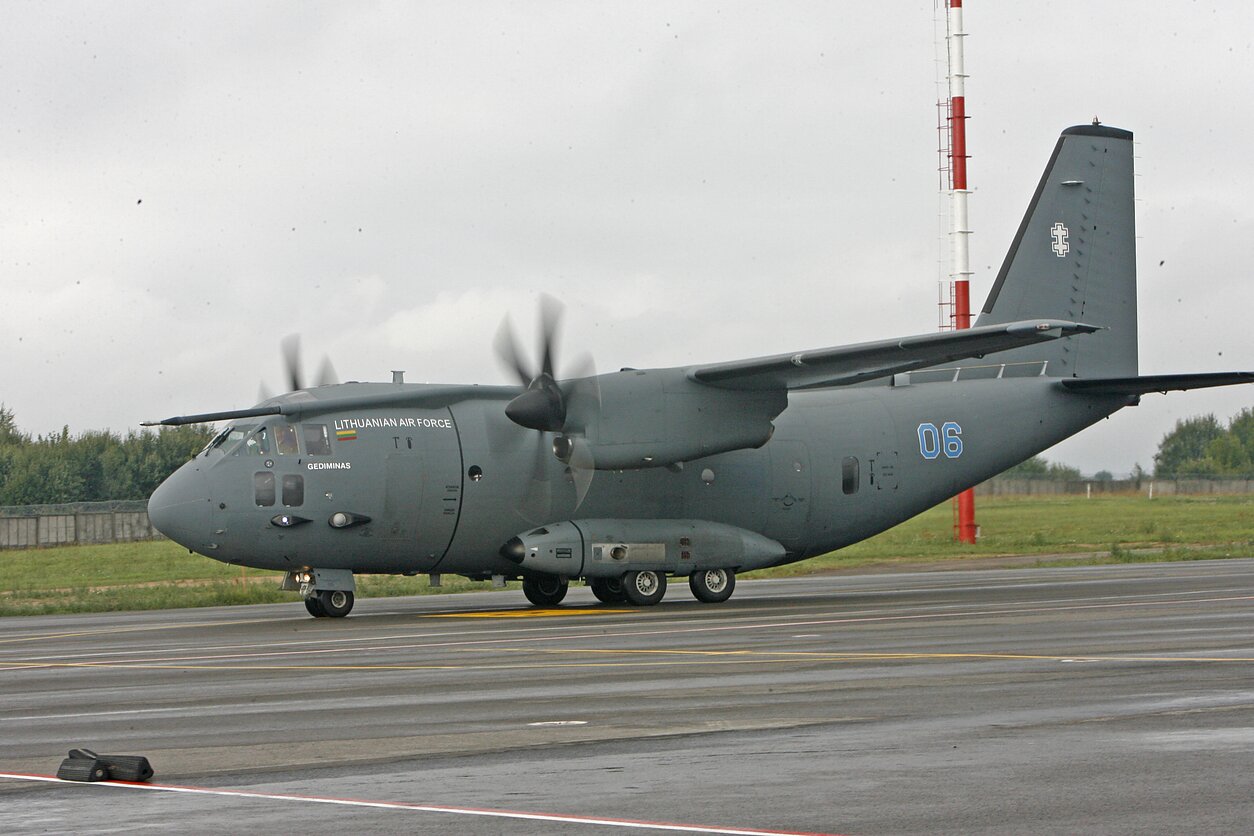 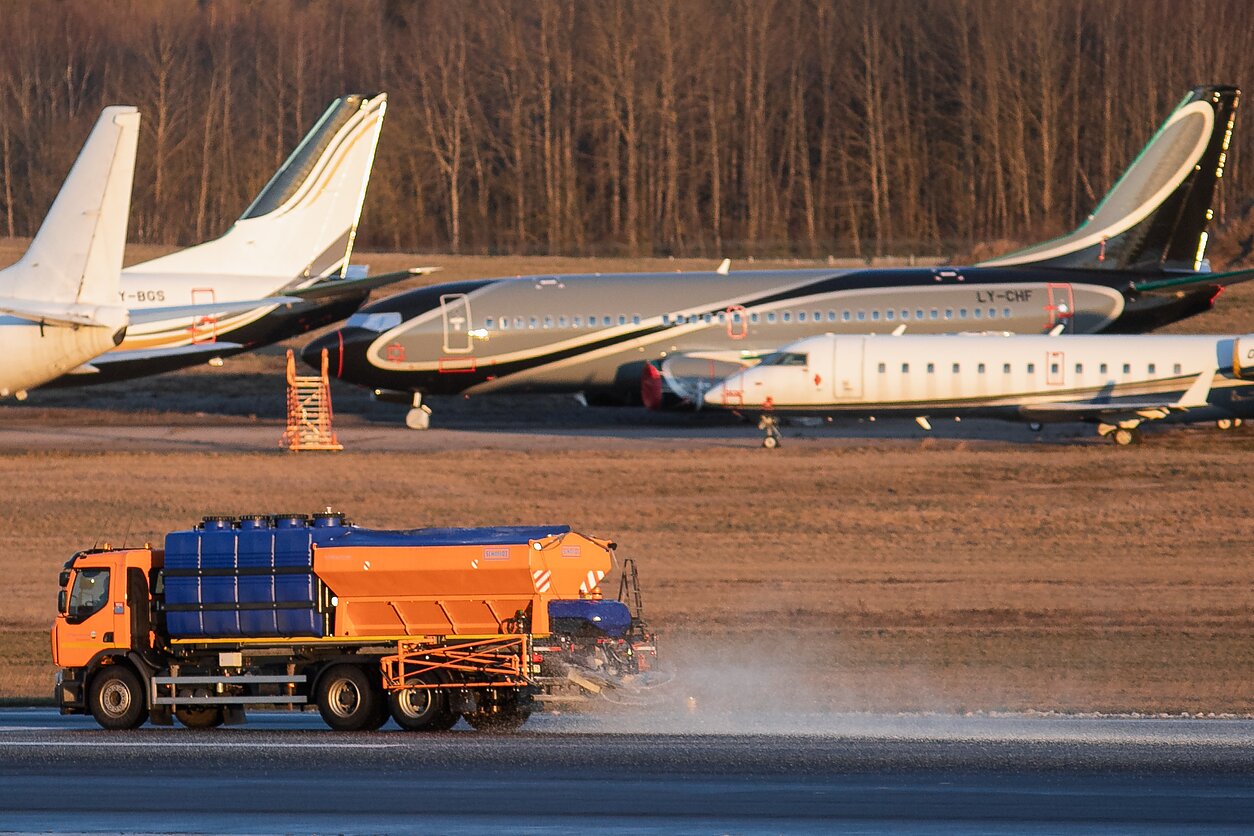 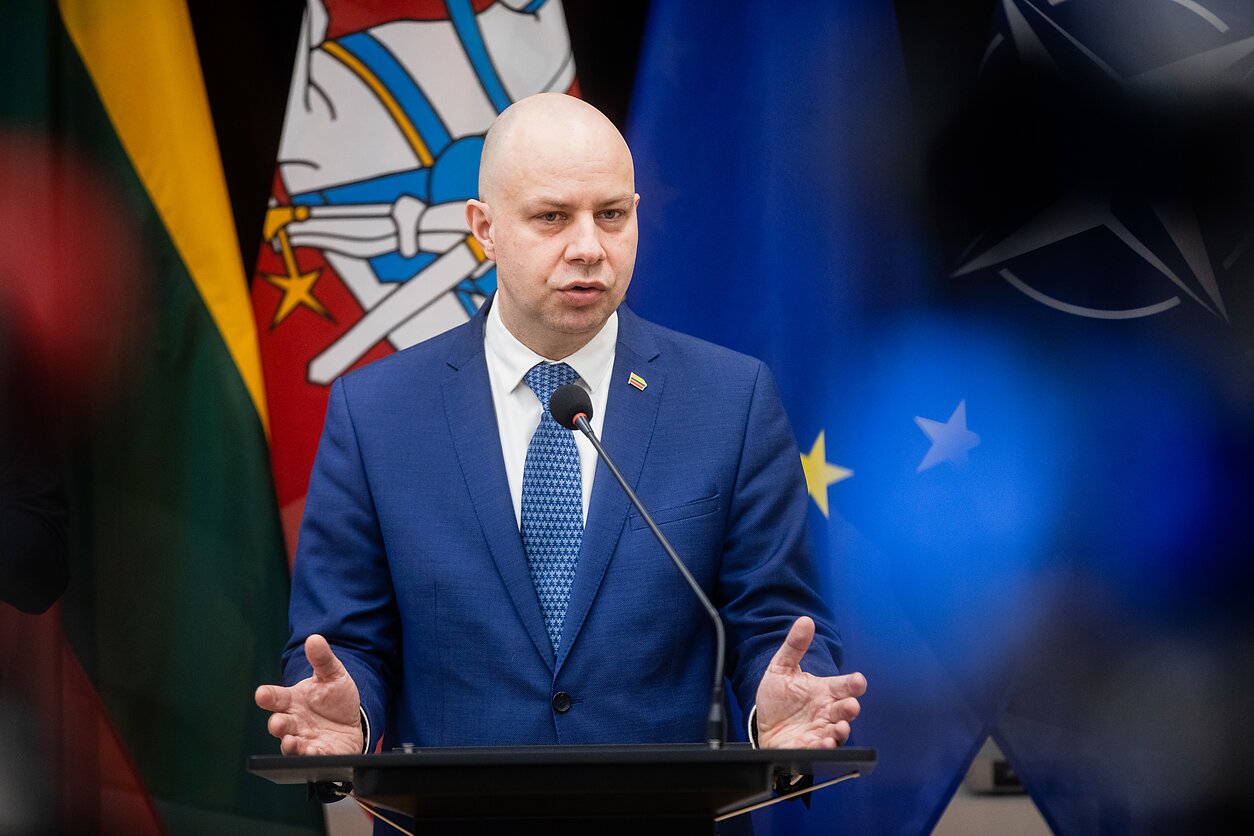 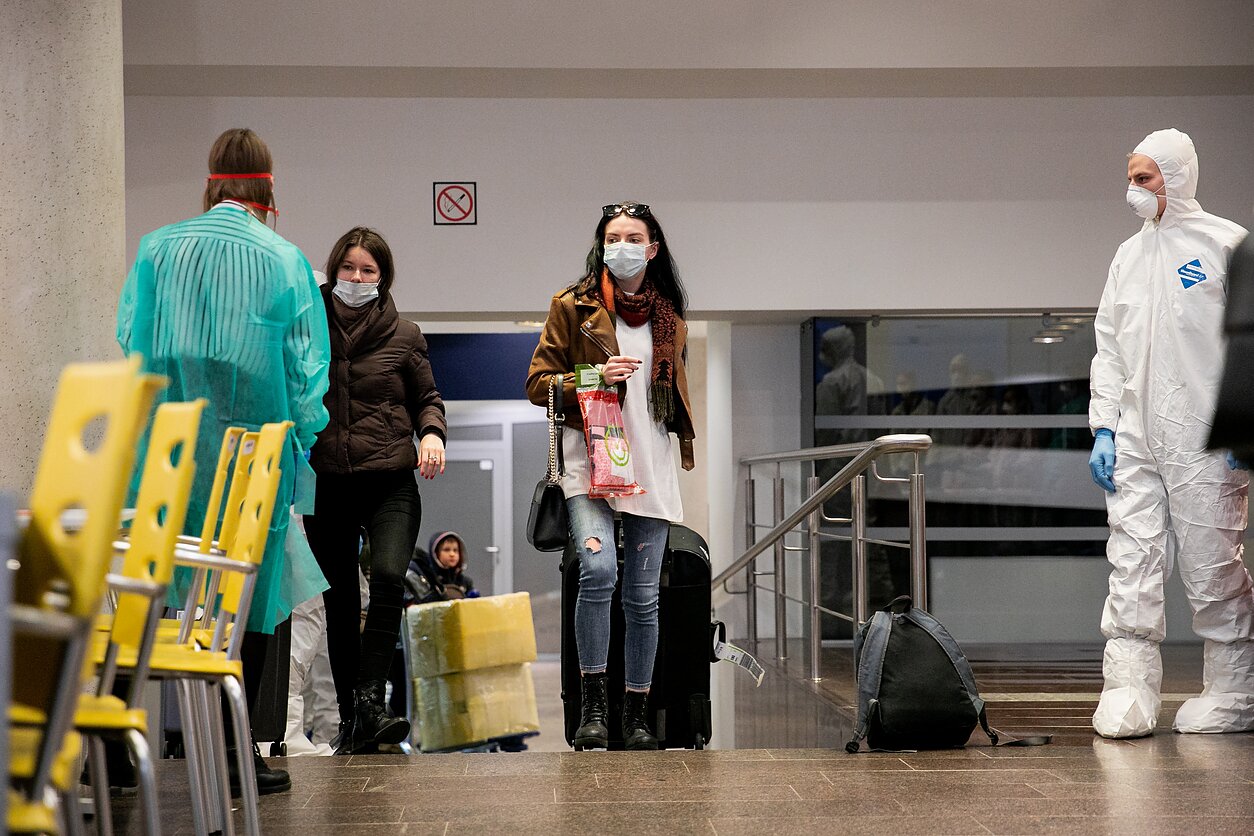 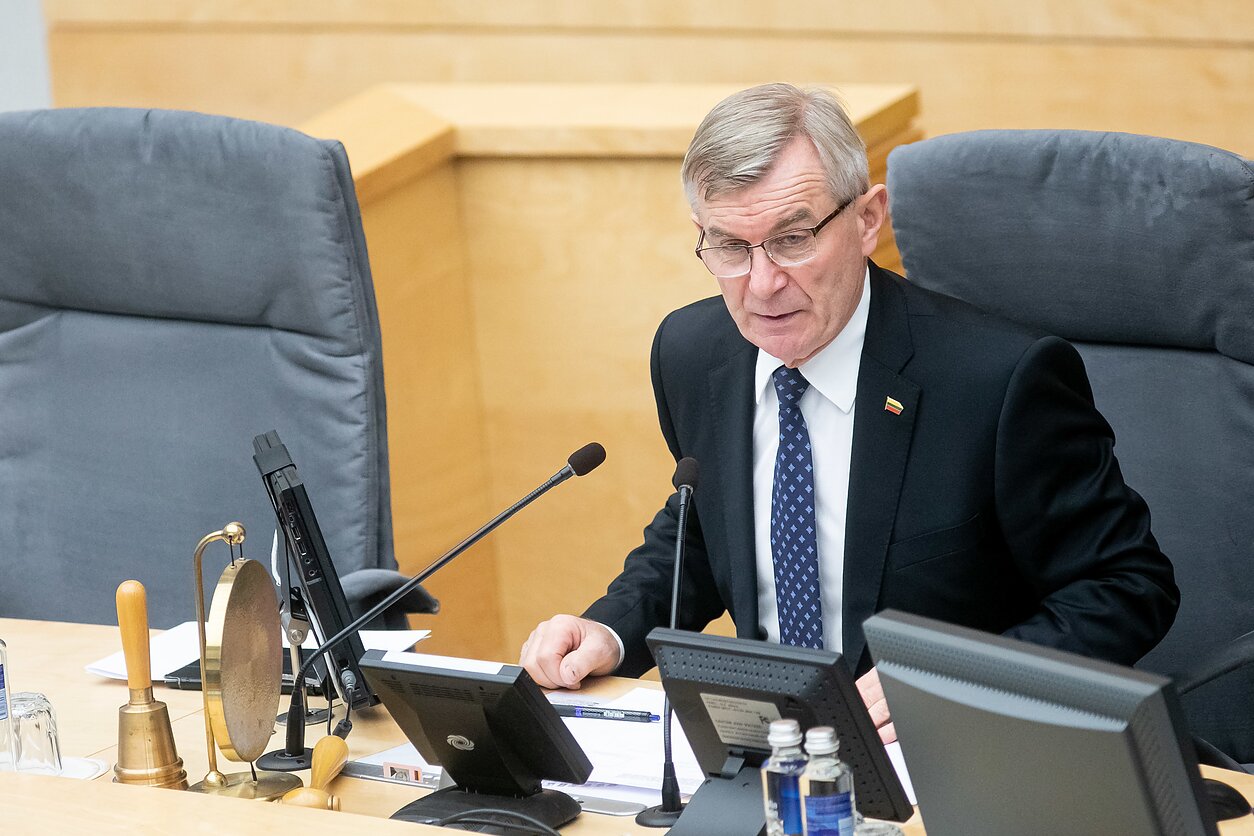