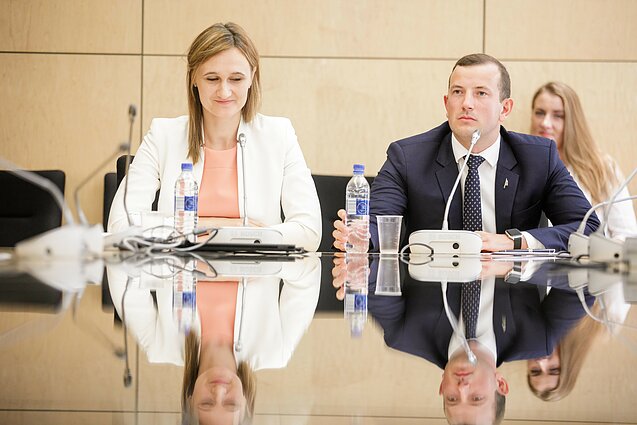 Virginijus Sinkevičius, right, and the leader of the liberal group in the Lithuanian parliament, Viktorija Čmilytė-Nielsen / E.Blaževič/LRT

Even though von der Leyen has reportedly asked countries to present a male and a female candidate for the EC, Sinkevičius says the issue was not raised during his meeting with the future EC president a few weeks ago.

“The president did not have questions [about gender equality], nor did I,” he told liberal members of parliament this week. “The president had expressed ambitions to have a gender-balanced cabinet. From what I see, I believe she will do it successfully, I've counted 12 women already.”

Sinkevičius, currently Lithuania's minister of economy and innovation, says that there is considerable gender equality in the country, despite a marked pay gap between men and women and the fact that only one minister in Lithuania's 14-member cabinet is a woman.

“We tend to focus too much on the government and neglect the general view,” Sinkevičius said. “The EU compiles the social [progress] index where Lithuania looks very well in terms of enabling women, one of the leaders in the EU. The biggest challenge is the pay gap. Women's incomes are markedly smaller than men's, but the overall image is not that bad in Lithuania,” the minister is quoted by the ELTA agency.

In 2018, the gender pay gap stood at 13 percent in the country, according to Statistics Lithuania. It contracted by 1.2 points since 2017.

Between December last year and this week, Lithuania was the only EU country without a single female minister in its government. This week, Rita Tamašunienė was appointed minister of agriculture.