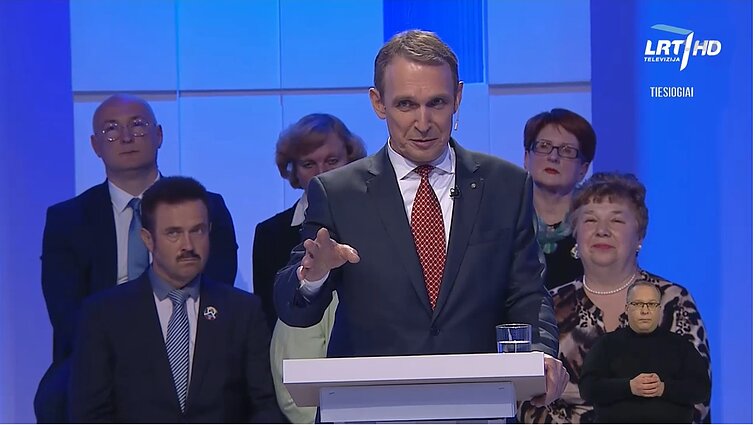 The third televised debate began with nine candidates running for the Lithuanian presidency on Thursday night, but one of them, Arvydas Juozaitis, left the event in the middle, claiming the public broadcaster treated him unfairly.

Juozaitis, an independent candidate, left the LRT studio during a live broadcast of the debate where the presidential hopefuls were discussing justice and fight against corruption.

“You are raising the question of corruption, but corruption is not just about bribery,” Juozaitis said before walking out.

He accused the public broadcaster of favouring certain candidates and ignoring others, including himself.

“[Gitanas] Nausėda and I announced at the same hour that we were running. The public broadcaster gave him twice as much time, like a national celebration, with kisses and all,” Juozaitis said.

Disproportionate media attention directly affected poll results, he insisted: “People will vote for a monkey, if you show it often enough.”

Juozaitis also accused the media of attacking his family.

Nausėda is another independent candidate, who until recently was front-runner in the polls.

The latest poll, published last Saturday by the pollster Vilmorus, put Juozaitis in the fifth position. He was favoured by 4.5 percent of the respondents.

Nausėda polled second with 21.9 percent, behind the conservative candidate Ingrida Šimonytė with 22.3 percent.

The presidential election is scheduled for May 12.

LRT has issued a response, rejecting Juozaitis' accusations. According to the public broadcaster, LRT TV's evening news show broadcast two stories about Juozaitis' campaign, giving him as much airtime as to Nausėda. Moreover, Juozaitis has rejected two invitations to appear on LRT TV.

The public broadcaster is also considering defending its reputation in court.