Alexander Lukashenko inside a Covid ward in Belarus. / AP nuotr.

Belarusian authorities have abolished mask mandates less than two weeks after they were introduced and a day after the country registered a record number of new coronavirus infections.

The decision came after authoritarian ruler Alexander Lukashenko dismissed the mask mandates and other measures to control the spread of Covid-19 as unnecessary.

The mask mandates were introduced earlier this month amid a new wave of infections and required Belarusians to wear medical masks in all indoor public areas, including public transport and stores.

Doctors who have been treating Covid-19 patients were shocked by the decision, especially after the country on October 21 reported 2,097 new confirmed daily infections, the highest number so far.

"Clinics and hospitals in all regions of the country have been overwhelmed with Covid-19 patients and suffered shortages of oxygen and medicines," he wrote on Facebook.

Lukashenko dismissed concern over the coronavirus as "psychosis" when the pandemic began and refused to impose any restrictions. 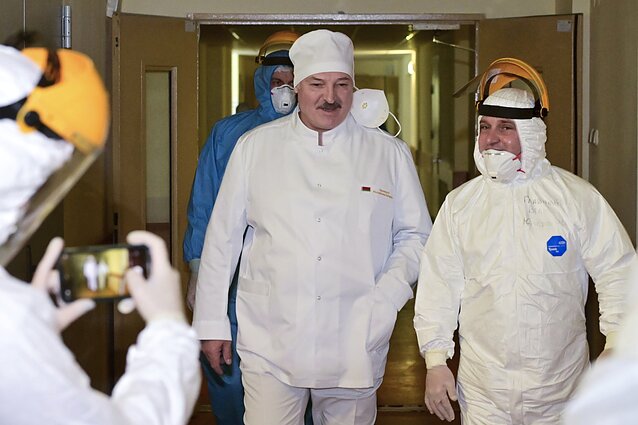 Alexander Lukashenko inside a Covid ward in Belarus. / AP nuotr.

His attitude angered many Belarusians and contributed to their outrage over the presidential election in August 2020 that handed Lukashenka a sixth term -- an outcome the Belarusian opposition and the West have refused to accept.

In announcing the end of the mask mandates, Lukashenko said: "This is the advantage of a dictatorship -- whoosh, and a wrong decision is no longer valid."

Opposition leader Svetlana Tikhanovskaya, who moved to Lithuania after the 2020 election fearing for the safety of her family, said people in Belarus don’t believe the government or official statistics.

"Belarus faces the worst wave of the coronavirus, and it’s not ready for that," Tikhanovskaya said during an online conference.

Countries across Eastern Europe have experienced a surge of infections in recent weeks, prompting authorities in the region to announce a raft of restrictions. 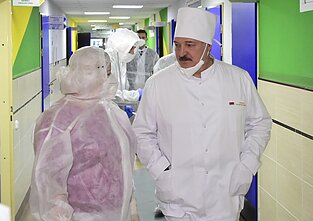 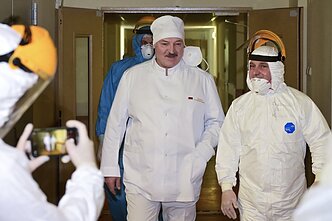