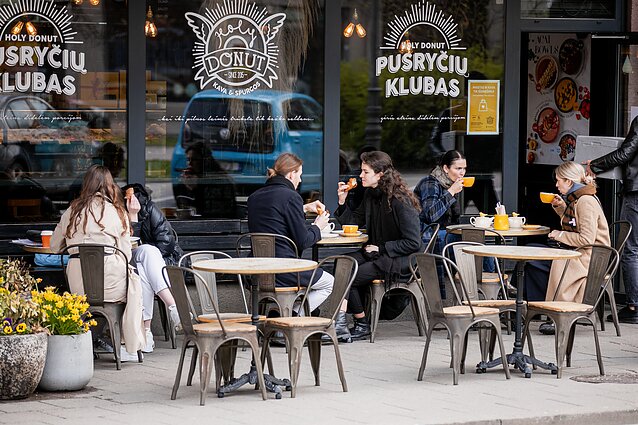 It’s early morning, June 1786. Ludwika Byszewska, a noble lady from Warsaw, is visiting Vilnius and opens her diary to write a few lines: “Since I agreed to accompany the respectable mister Strecki to Antakalnis at four in the morning, I woke up at three, following Voltaire’s advice drank a cup of black coffee, and was quite ready.”

The Voltairian method says that you may start enjoying coffee at five in the morning and not count the cups until three in the afternoon. Voltaire, his contemporaries said, was obsessed with coffee. Was he alone?

Coffee travelled with the army

Widely known and loved in the Muslim world since the 15th century, coffee was not popular in Europe until the 1600s. Unlike other invigorating substances, such as chocolate, tea, and nicotine that arrived from the Americas, coffee came to the Old World from Ethiopia through the port of Aden. Back then, it was considered a Turkish product, the concept not entirely lost in modern Lithuania too, since some still use small long-handled copper pots to brew coffee “Turkish style”.

After the Battle of Khotyn (1673) against the Ottomans in today’s Ukraine, the commanders of the Lithuanian army are believed to have brought some Turkish coffee back to Vilnius. Indeed, there are more legends linking war, Turks, and coffee. In 1683, after the Battle of Vienna when the legendary Hussar army sealed the outcome of the battle, an unknown soldier is said to have found as many as 300 bags of coffee among the Ottoman supplies. He took them and opened a café in Vienna.

A linguistic point of view also provides certain insights into the matter. A number of 18th-century inventories list filiżankas, or coffee cups, among the valuables owned by middle-class residents of Vilnius, fildżan being Turkish for a coffee cup. Similarly, the Polish word imbryk stands there for a coffee pot, embrek in Turkish. However, it is still unknown when such items became commonplace in Lithuania. 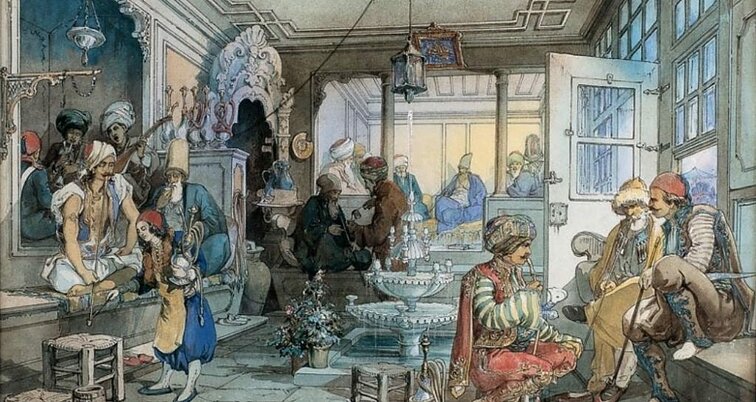 From Saxony to Poland and then to Lithuania

The vogue of coffee spread throughout Europe slowly but surely. Arguably, the French made the biggest impact in the first half of the 18th century, when coffee became more than an attribute of the royal court, and grew popular among aristocrats and students alike.

Although Louis XIV, the Sun King, was not a great fan of coffee himself, Ottoman diplomats in Paris are known to have introduced the ritual of coffee drinking into many elite homes. Later, when coffee became an important commodity, Louis XIV realised it could contribute to his coffers through taxes. To encourage consumption, he began sipping coffee in public. Soon the French craze reached other European courts and cities.

We know beyond reasonable doubt that at least some Lithuanians first developed a taste for coffee during the reign of August II (1697–1733), the king who tried to rule while residing in Dresden.

Here’s what historian Jędrzej Kitowicz (1728–1804) had to say: “The custom of drinking coffee spread in Poland during the reign of August II […]. In the morning, people consumed it with milk and sugar before indulging in vodka. Tea, believed to cause thirst and cool the stomach, was forgotten […]. Coffee, as an early morning drink, proved particularly popular among women.”

According to Stasys Samalavičius, a modern-day Lithuanian historian, coffee cups and pots were common among middle- and upper-class residents of Vilnius already in the 1750s. One Konstancja Honorska owned a tin coffee pot, a coffee grinder and a black coffee table in 1764. It is likely that coffee contributed to the popularity of Meissen porcelain that created a unique aesthetic in the manors of elite nobles. 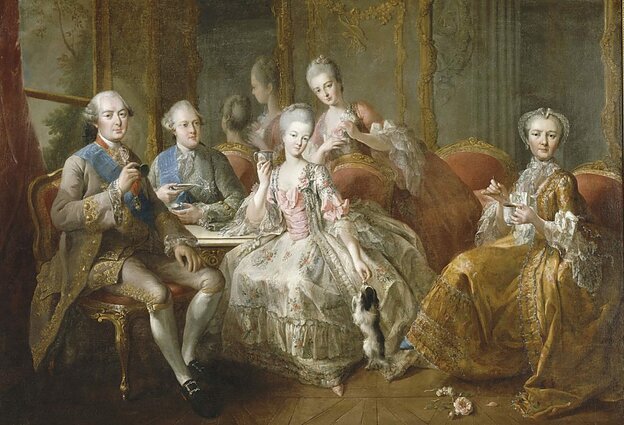 The family of the Duke of Penthièvre, La Tasse de chocolat. / Jean-Baptiste Charpentier the Elder, 1768. Palace of Versailles

Coffee very quickly turned into a drink loved by everyone, from monarchs to travelling musicians. Consumption and demand skyrocketed and Turkey soon found itself incapable to quench the thirst. Merchants from the Netherlands planted large sways of land in Batavia (Indonesia) with coffee trees in the 18th century and the French did the same in Martinique, but even that was not enough. The price of coffee was steadily growing, quality beans were rare, while the demand increased.

Stanisław Bonifacy Jundziłł (1761–1847), a professor of botany at Vilnius University, was just one of many looking for coffee substitutes, all in vain. Owners of local cafés would mix coffee beans with roasted cereals, beans, peas, fruits, and even certain vegetables, but the result, predictably, was unsatisfactory. Then some cafés invented the “secondary coffee” made by boiling already used coffee grounds in water.

In the early 19th century, a suburban woman told a traveller: “Good coffee nowadays is nowhere to be found. People forgot the vital secrets of brewing, which should involve a stag’s antler to stir the coffee; cream and almonds do make it better, and you should not forget chicory that gives flavour and gilds the cup, but make sure you limit it to one-fourth, the proportion that produces the best colour and does not make coffee taste bad. Now some people add a half, but is this coffee, God forbid? Roasting also requires skill, because it is easy to burn the beans.” 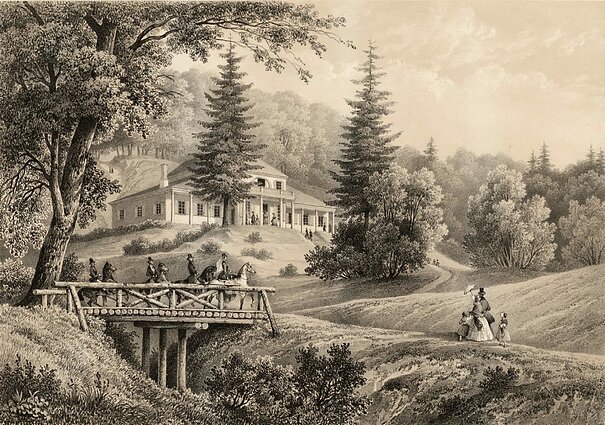 The café “Country coffee” that was established in Ribiškės manor near Vilnius in the beginning of the 19th century. / Orbis Lituaniae

The first café in Vilnius

Archival documents like the one quoted above indicate that by the turn of the 19th century the so-called coffee culture was already widespread in Vilnius. People indulged in coffee in palaces, ordinary homes and in public places. This development also came later than in Western Europe, but only slightly.

It is the French who insist on having invented the idea of a café. They say Le Procope, the year 1686 on its signboard, is the world’s oldest café still in operation in Saint Germain, Paris.

When and where did the first Vilnius café open? A dearth of historical data makes a precise answer complicated, but we can offer at least one version. At least fifty cafés, then known as kafenhauses, operated in different parts of Vilnius in the 1810s. At the end of 1787, neighbours filed a complaint to a local court of law against Simon and Barbara Klukowski who had fitted an illegal signboard to the house to advertise coffee they were selling. The Klukowski House, now number 5 or 7 on St John’s Street, is where, quite likely, Vilnius’ earliest café was.

In her 1786 diary, the aforementioned lady Byszewska tells us about another café in Pohulianka, the favourite walking area next to the present-day Basanavičius Street in the centre of the city. “We went to Pohulianka for coffee. The place there was built of wood but very decent. For nine złotys, we got plenty of coffee that would have cost us twenty-seven back in Warsaw. We spent there well over two hours.”

So, do you have a couple of hours for coffee? 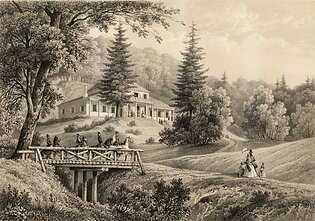 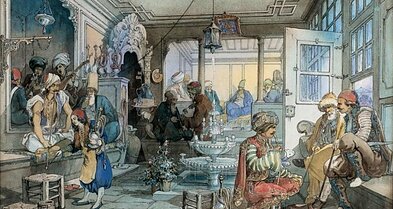 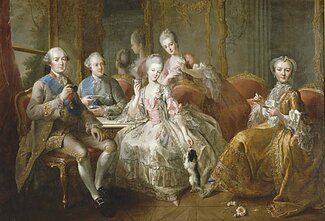