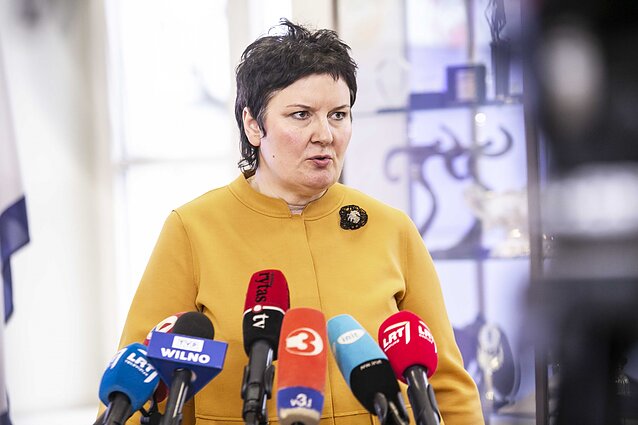 Lithuania's Deputy Health Minister Lina Jaruševičienė, who has been named a suspect in an abuse of office investigation, handed in her resignation letter on Monday, the health minister's spokeswoman said.

“Today, Vice Minister Lina Jaruševičienė came to the Ministry of Health and handed in her resignation letter. The request was registered. Health Minister Aurelijus Veryga will satisfy this request when he returns from vacation on Friday,” Lina Bušinskaitė, the spokeswoman, said.

Until then, the vice minister is on sick leave, the spokeswoman added.

The Health Ministry says it was cooperating with law enforcement institutions and will provide all necessary information.

The investigation by the Financial Crime Investigation Service (FNTT) centres around a 6-million-euro purchase of rapid coronavirus tests by the National Public Health Centre (NVSC) laboratory.

Six individuals, including Jaruševičienė and people from Profarma, a Lithuanian company that supplied the tests, have been named suspects.

Bušinskaitė said she could not comment on the ongoing investigation, but added she hoped it would not hinder the ministry's work.

“All my colleagues [at the Health Minsitry], including the vice minister, worked day and night and on weekends without rest to stop the spread of the coronavirus in the country,” Bušinskaitė said.

The FNTT says Jaruševičienė is suspected of abusing her office and exceeded her powers, leading to a large-scale damage to the state.

Profarma is suspected of having forged documents and provided false information about the producer of the rapid tests when signing the 6-million-euro contract, according to the investigation.

It is suspected that the buyer, the National Public Health Centre's laboratory, was misled and may have failed to research the market before signing the procurement deal and transferring the payment.