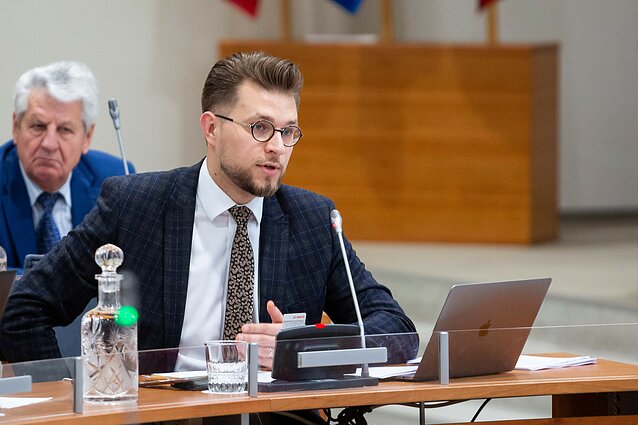 Lukas Savickas, an adviser to the Lithuanian prime minister and member of Vilnius Council, may take over as the country's minister of economy, a leader of the biggest ruling party says.

The ruling coalition is meeting to discuss a replacement for Virginijus Sinkevičius, who left to take up a job in the European Commission, on Tuesday evening.

Ramūnas Karbauskis, the leader of the Farmers and Greens Union, said he had discussed Savickas with Prime Minister Saulius Skvernelis.

“He is a member of Vilnius Municipal Council who has worked as the prime minister's adviser for a long time now,” Karbauskis told BNS about the candidate. “I have had personal contacts with him on numerous occasions and I have no doubts about his competence.”

“This issue will probably be raised and discussed by the ruling coalition this evening,” he said. “I have not heard any other names; no other options have been discussed.”

Karbauskis has said Savickas is a very strong candidate.

“With his age and experience, he is somewhat similar to former minister Sinkevičius. The community that worked with Sinkevičius will see a similar mentality and similar attitude, if Savickas becomes minister,” the politician said.

Speaking with BNS, Savickas confirmed to have discussed possibilities with the prime minister, but has refused to name his policy priorities in the new position.

Savickas has worked as an adviser to the prime minister on economic and strategic change matters since December 2016. He was elected to Vilnius Municipality Council under the Farmers and Greens Union's list earlier this year.

Following his studies, Savickas returned to Lithuania and worked for the country's foreign investment promotion agency Investuok Lietuvoje (Invest Lithuania). He also worked for the association Investor's Forum as head of policy and public affairs.

Savickas is a member of the WEF Global Shapers and several other public initiatives.