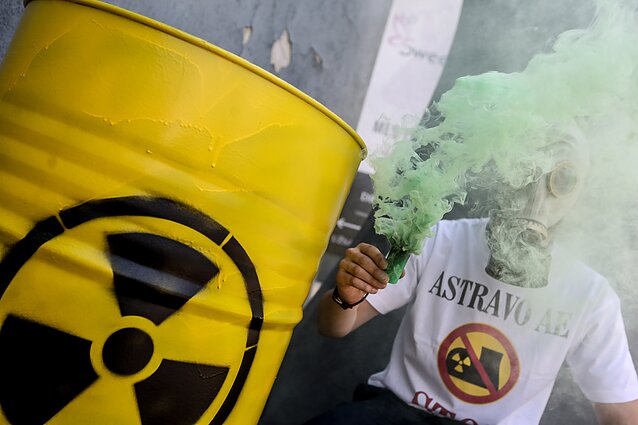 Protest against the Astravyets NPP in 2016 / BNS

Sections of Vilnius will be evacuated as part of a drill to test how the city is prepared to respond to a possible nuclear accident at the Astravyets Nuclear Power Plant in Belarus.

The simulation is planned for September 5.

Povilas Poderskis, the city's municipal administration director, says the aim is to prepare for a scenario where radioactive contamination covers an area of 30-kilometer radius around the nuclear facility, including Vilnius.

The drill will involve “an evacuation of a part of Vilnius; people will be directed to so-called decontamination stations,” Poderskis said.

“A station will be set up outside the Siemens Arena where we'll have people change their clothes, put them on buses and escort them along Ukmergė Street in the direction of Ukmergė,” he added.

The exercise will help evaluate the readiness of municipal companies and services to respond to threats and will also include a simulation of cyber-attacks.

“We'll disrupt the work of public institutions and we'll see how everyone of us is prepared,” Poderskis said.

The municipal official criticized national authorities for their sluggishness in preparing for the launch of the Astravyets nuclear power plant and potential incidents.

According to Poderskis, the city's administration sees “huge holes” in funding, equipment and interaction with other authorities.

For example, under the drill scenario, “civil defence personnel receive information about radiation contamination,” the director said, but “the government doesn't finance such on-duty staff”.

“So we will simulate that we have such staff, while in fact we don't,” he said.

Lithuanian authorities say the Astravyets plant under construction around 50 kilometers from Vilnius and less than 30 kilometers from the Lithuanian border fails to meet international safety and environmental standards, an allegation that Minsk denies.

Belarus plans to launch the first reactor at Astravyets NPP this autumn.