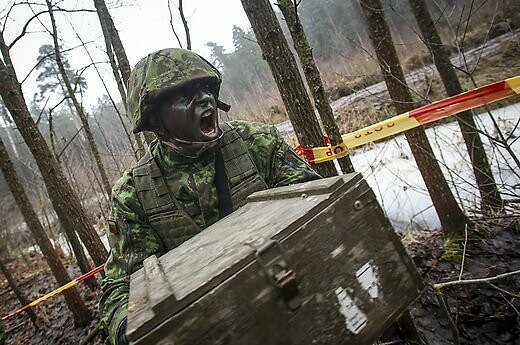 A scene from artificial town near Vilnius that has been recently built especially for training purposes shows that Lithuanian Special Forces are getting lift by the NATO helicopters.

This was repeated many times during real missions in Afghanistan, and now the training scenario envisions a threat in Lithuanian city, most probably modelled by Russian little green operations in Crimea and Eastern Ukraine.

Lithuania’s best strategic hope in a case of war lies within its own ‘green boys’. A term, however, has nothing to do with Russian little green men that acted in Crimea, but has historical roots in partisan warfare that Lithuanians fought in local forests against Soviet Union during 1944-1953.

Lithuanian ‘green boys’ or ‘forest brothers’, as they are also called, put up one of the longest resistance acts during the Soviet period.

‘We look how candidates act within an extremely stressful environment’, one of the modern ‘green boys’ explains the process of selections, not recealing his real name and asking to change his voice, because everything about Lithuanian Special Forces is secret.

They made their name after a decade of operations in Afghanistan where squadron named ‘Kite’ fought alongside Americans and other NATO partners, riding their motorbikes much faster, in various terrains compared to all conventional NATO vehicles.

‘An organization that was formed less than ten years ago, right know is one of our most capable partners’, said Commander of Unites States Special Operations Raymond A. Thomas who fought with Lithuanians in Afghanistan and now helps in training, back here in Lithuania.

In January, ‘The New York Times’ wrote that American Special Forces now have a “persistent” presence here with Baltic special operation troops, after forging close ties with them in Iraq and Afghanistan.

Lithuanian Special Forces counted on NATO helicopters back in Afghanistan, and they still lack their own air platform, hoping to get one in the nearest future.

‘Now we are looking to rent them and we will discuss the possibility to purchase them after 2022’, said Commander of the Lithuanian Army Jonas Vytautas Žukas.

In response to Russia’s annexation of Crimea and the clandestine war in eastern Ukraine, Lithuania has rapidly increased its defence spending, planning to reach 2 percent of GDP next year. It also created its own rapid reaction force that is capable to respond to any military threat immediately, and returned conscription.

NATO Allies sent battalions of around 1000 troops to each of the three Baltic States and Poland.

A soldier of the Lithuanian Special Forces, no name given, voice changed:

We have consistent selection when we select the most capable soldiers and then we have a basic training where we identify their characteristics that are to be developed during further training.

A soldier of the Lithuanian Special Forces, no name given, and voice changed:

We create special situations for candidates and we look how they act within an extremely stressful environment, make decisions, manage themselves, and not hesitate.

Lithuanian SOF jump out of the plane

We think about transport helicopters for Special Forces or rapid reaction forces, but our budged is already allocated for a couple of years to go, and now we are looking for the possibility to rent them, and we will discuss to purchase them after 2022.

RAYMOND A. THOMAS, Commander of the U.S. Special Operations Command:

I had a great pleasure working with Lithuanian special operation forces on several occasions, I worked with them in Afghanistan when I was a commander of NATO staff – just a tremendous organization. We are very proud of evolution of Lithuanian SOF. An organization that was formed less than ten years ago, right know is one of our most capable partners, both in a combat zone, where we work with them and certainly here with this challenging mission.

ALEKSANDRAS MATONIS, author of a book about Lithuanian Special Forces 'Soldiers of Gabriel':

You can find soldiers who had 10 or 12 missions in Afghanistan and that shows the price, which they paid not only as soldiers, but as family members or fathers.