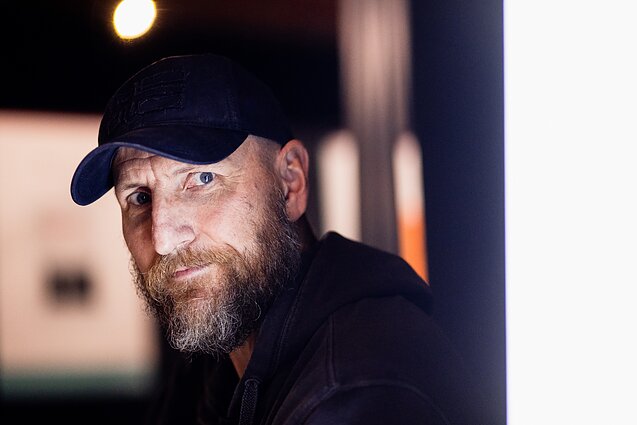 Darkness and Company by Sigitas Parulskis

In the second review of this series we once again reckon with the shadow of the Second World War, this time in Darkness and Company by Sigitas Parulskis. Here it is not just a presence looming in the background, as in Škėma’s White Shroud, but the immediate subject matter: the novel provides an unflinching, uncomfortable look at the Lithuanian experience of the war.

Originally published in 2012, and written by an author born in 1965, this is a historical novel and the horrors recounted are – unlike with Škėma – not based on personal experience. In any case, Parulskis’ aim goes well beyond personal reflection: what he attempts here is something that is both grander and blunter, like a national confessional – or a trial. “[I]t seemed to me to be an important act of consciousness to write a book in Lithuanian about Lithuanians who took part in the massacres of Jews,” he writes in the foreword to the novel, and it is impossible to assess the novel without reference to this social and political twenty-first-century context.

The novel tells the story of Vincentas, an impassive photographer of rather loose morals in Kaunas who finds his life spiraling out of control as the invading Nazis take over the city. He is half coerced to take up the task of recording executions and massacres for the benefit of a sadistic SS officer, in exchange for his own personal safety and that of his Jewish lover, Judita. From there, the story unfolds in a series of vignettes or scenes, most depicting individual assignments of a mostly Lithuanian extermination squad Vincentas follows around. Many of these, steeped in violence, are not for the faint of heart. 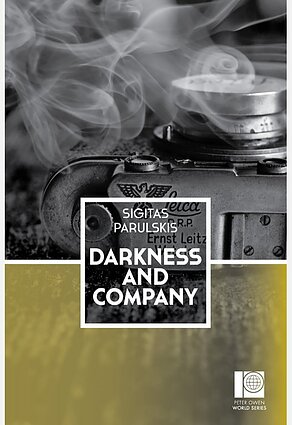 This central narrative is framed, at the very beginning and the end of the novel, with sections set in allied-occupied Germany just after the conclusion of the war. These passages see Vincentas reduced to the life of a vagrant and a refugee: a man on the run from his own past and entanglement in unspeakable crimes as much as any occupying forces. They also reveal the toll that relentless guilt has taken on his mental state. This way, the framing narrative strongly suggests that Vincentas is not quite a reliable narrator of his tale, which is told in the third person but through his eyes.

Parulskis has personally taken on the task of unravelling the myth of war-time Lithuania, but the theme has universal relevance.

The unreliability of Vincentas’ perspective is important for interpreting the prose, but also serves a symbolic function: stranded in a refugee camp, he attempts to reinvent himself as an innocent victim of the war, a bystander swept aside by events of historical magnitude. And is that not also, Parulskis seems to ask, the way with the stories that nations tell about themselves? Are they anything more than convenient fictions that serve to exculpate? Parulskis has personally taken on the task of unravelling the myth of war-time Lithuania, but the theme has universal relevance.

Thematically, Darkness and Company revolves around the concept of observation, as embodied in the central motif of photographs and the photographer. Is it possible to observe without participating? Is it possible to participate without sharing guilt? To stay neutral when war gnaws at society and humanity all around you? For Parulskis, the answer is crystal clear and stated without hesitation: no. In the face of irredeemable evil, the camera falls from Vincentas’ grip, depriving him of the comfort of an imagined excuse that he never really believed in anyway. 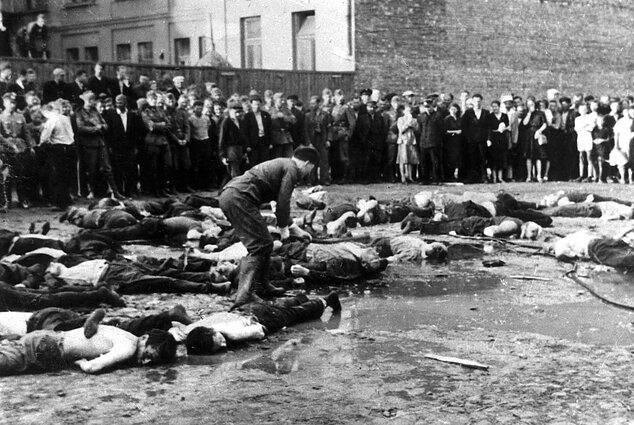 Lithuanian civilians and German soldiers watching the massacre of 68 Jews in the Lietūkis garage of Kaunas on June 25 or 27, 1941. The image was taken by a German soldier who reported that the Lithuanian crowd cheered and applauded with the killing of each Jew. / Wikipedia/Vilna Gaon State Jewish Museum

Family scenes provide an interesting complement to the atrocities. Vincentas’ mother, once a cabaret performer, whiles away the days medicating her ennui with alcohol, seemingly detached from reality. His ailing stepfather – who may be his real father after all – is a carpenter by trade, an allusion both to a recurring messianic motif and to woodcarving as a Lithuanian folk tradition. A sense of moral decay and lives built on lies seems to fill the air, with the dysfunctional family a thinly veiled allegory for Lithuania as a whole. Curiously, it is the character of Judita, in theory so important for driving the plot forward, that feels the least fleshed-out one, mostly appearing through the lens of Vincentas’ various obsessions.

A key flashback scene shows young Vincentas finding an unfinished cross in the home workshop and leaning back on it with closed eyes, imagining himself crucified. Later he equates his reportage for the Nazis with the image of the Saviour, and his observation with innocent victimhood: “Yes, he is only a witness. Like Him, that Other. He hangs on His cross and watches as villainy is committed in His name.” Parulskis returns to religion over and over again, always in this venomously ironic tone. It is an excuse – for an individual, for a nation – and not even a good one: the analogy makes Vincentas want to throw up.

The translation here, once again by Karla Gruodis, flows rather more smoothly than in White Shroud. It seems likely that this is due to the straightforwardness of the original, Parulskis being less given to experimentation and stylistic trickery than Škėma. Instead, in terms of form, the novel’s most notable feature is its episodic structure, with little connective tissue in between: the whole takes shape as a loose collection of moments rather than a steady step-by-step narrative. It is a good decision, allowing the reader to re-emerge between chapters for a breath of air amid all the grimness. 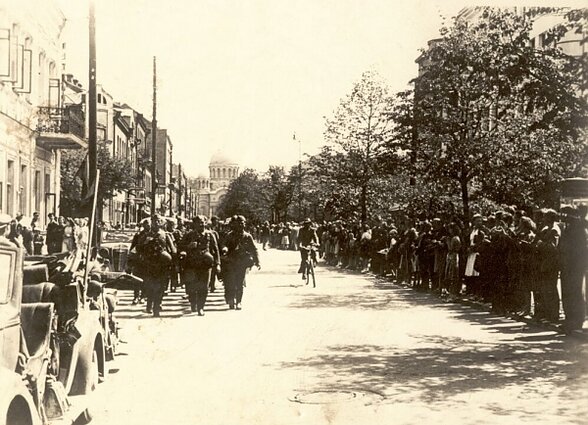 Nor is the text itself without its pleasures. At its best in a handful of moments, the novel is of great vividness: still and rich in atmosphere like the best photographs, yet shot through with the humanity’s capacity for cruelty and evil. One finds Vincentas sitting absentmindedly at breakfast while the radio drones on in the background, menacingly announcing new race laws. Later on, there is a quiet scene at dawn where he trails his camera on a boy desperately running away from an execution site after the soldiers have gone. These are tense, suspended instants that you feel will inevitably have to resolve themselves into violence sooner or later.

The figure of the perverted, philosophising SS officer – and the elision of sex and death throughout – comes across as a cliché drawn from decades-old Nazisploitation pulp fiction, or indeed from some postmodern Tarantino-esque regurgitation of the same

Not everything about the novel works quite so well. The figure of the perverted, philosophising SS officer – and the elision of sex and death throughout – comes across as a cliché drawn from decades-old Nazisploitation pulp fiction, or indeed from some postmodern Tarantino-esque regurgitation of the same. Worse, such sensationalism detracts from the seriousness of the underlying point being made. Sure, Parulskis can offer the unreliable narrator set-up as an excuse – what if this is all just Vincentas’ feverish imagination? – but we still have to read it; he still chose to write it.

It is perhaps also, in the twenty-first century, difficult to find fresh angles from which to write about the Second World War. The horrific logic of extermination and its everyday manifestations have been chronicled by first-hand witnesses like Primo Levi and Tadeusz Borowski, and Parulskis’ more detached depictions lack force by comparison. On the other hand, his cynical and occasionally fanciful tone recalls the work of Günter Grass, a shadow from under which the novel never manages to fully escape.

Arguably, the primary significance of Darkness and Company is as an intervention in the Lithuanian public sphere: a forceful discussion-opener for a specific national context that I, as an outsider, am not well-placed to assess. Yet the theme is universal: every nation has their historical taboos, many of them connected to the war. Parulskis’ ferocious single-mindedness in tearing open old wounds at the service of this kind of collective reckoning is admirable. It also suffuses the novel with a primal energy that ultimately sweeps aside any secondary shortcomings. 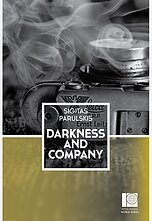 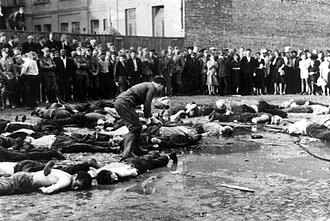 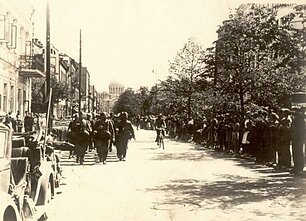 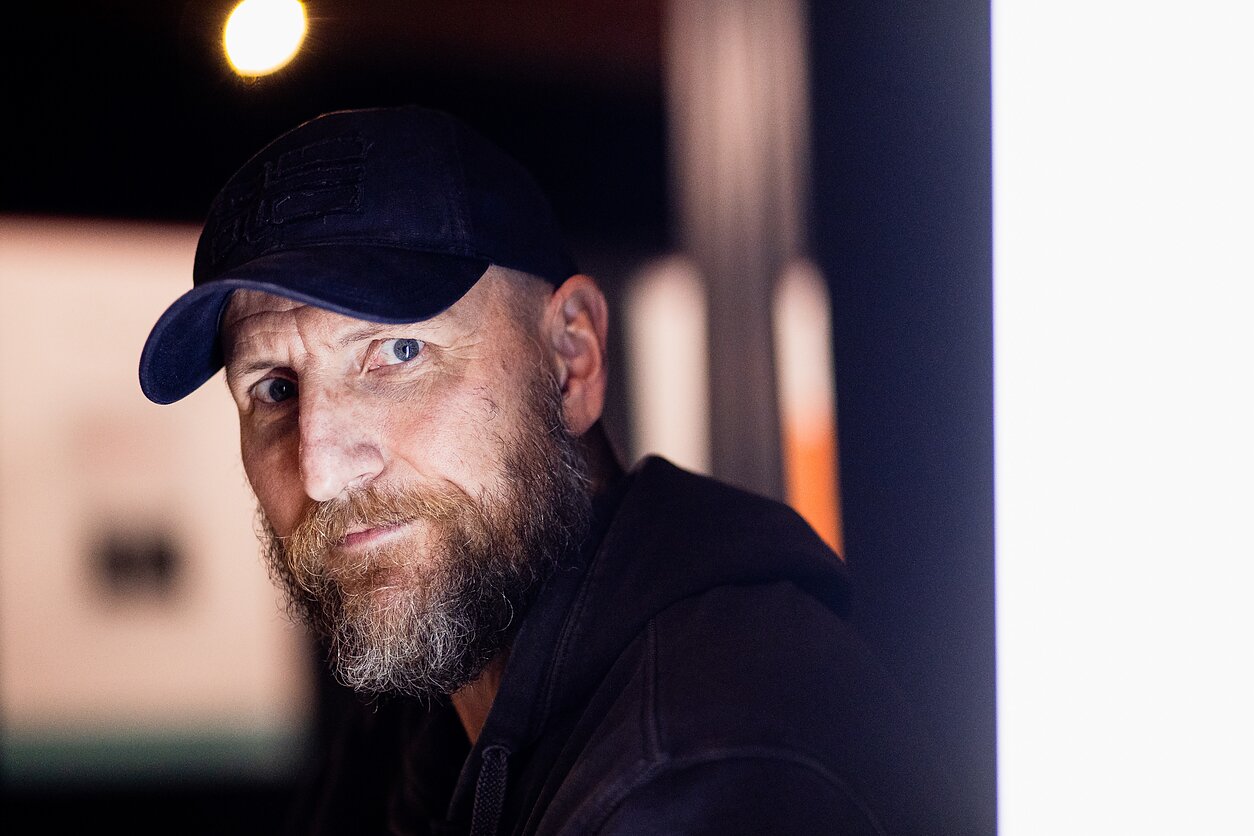 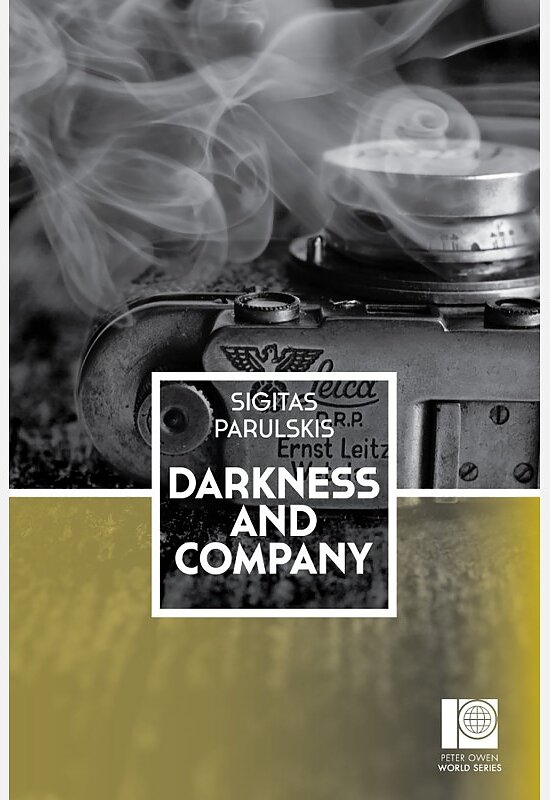 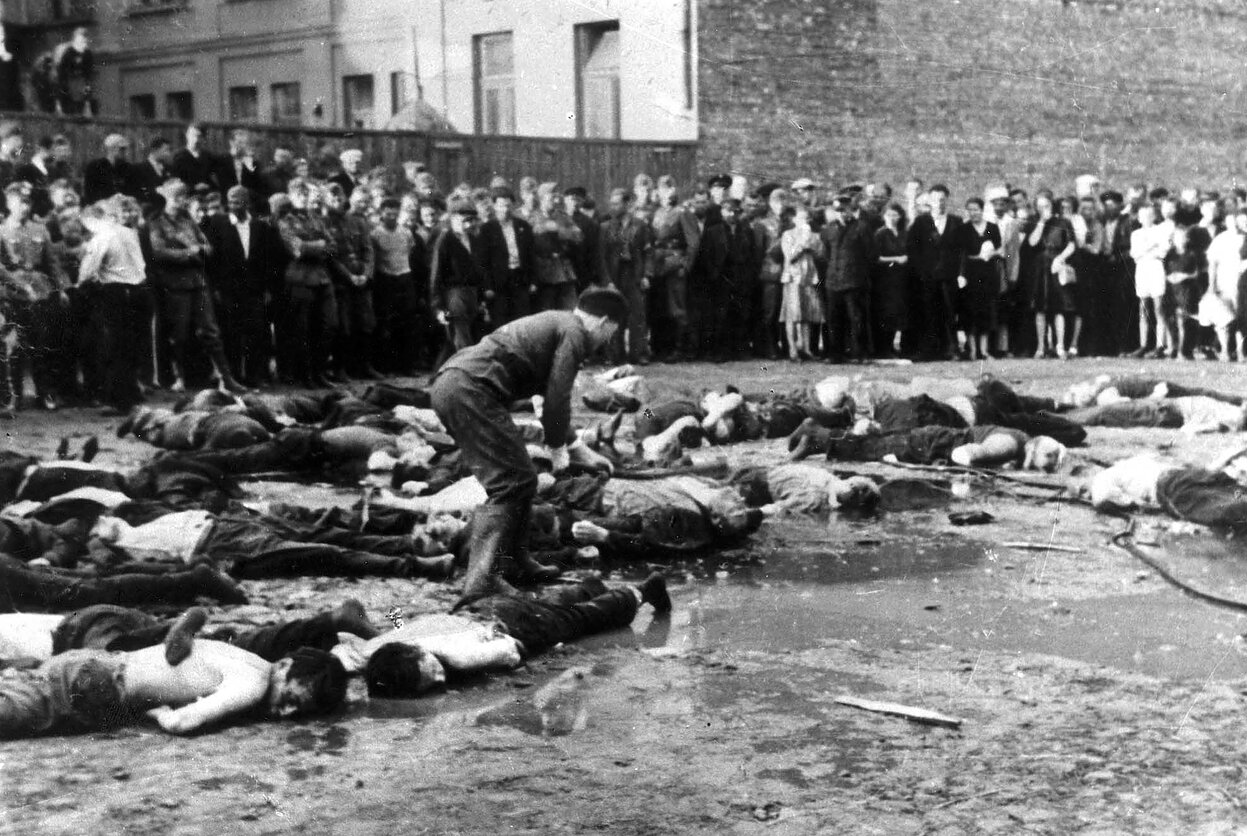 Lithuanian civilians and German soldiers watching the massacre of 68 Jews in the Lietūkis garage of Kaunas on June 25 or 27, 1941. The image was taken by a German soldier who reported that the Lithuanian crowd cheered and applauded with the killing of each Jew.
3 / 4Wikipedia/Vilna Gaon State Jewish Museum 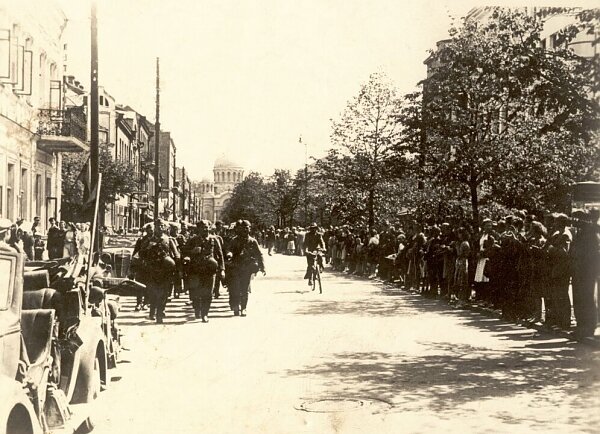