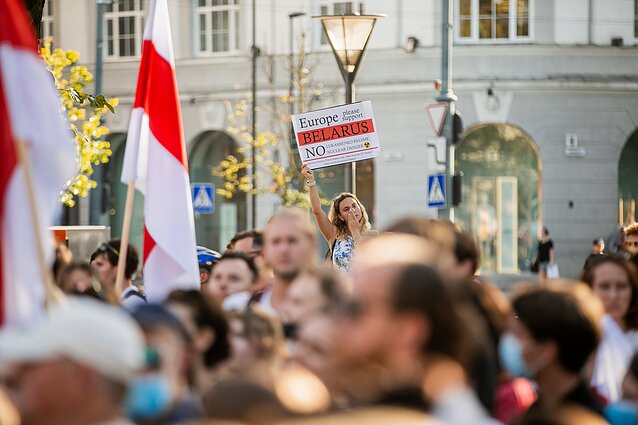 Demonstration in Vilnius to support the protesters in Belarus. / E. Blaževič/LRT

Lithuania will seek to introduce EU sanctions for Belarusian officials responsible for vote-rigging and violence against protesters, the country's Foreign Minister Linas Linkevičius said on Wednesday.

The issue will be raised at the extraordinary EU Foreign Affairs Council meeting on Friday, he said.

"First of all, we are seeking development of a common European position,” he told reporters.

"We usually find creative ways to condemn, strongly condemn and so on and so forth, but it's becoming hardly convincing and there should be some consequences, all the more so that everyone agrees that we need to reconsider our relations with Belarus and we need some leverage and liability formulated," Linkevičius said.

If no agreement is reached on a common EU position, Lithuania “will initiate national sanctions”, according to the minister.

Individual sanctions for Belarus would be ‘most effective’

Individual sanctions would be most effective, according to Lithuania’s European Commissioner Virginijus Sinkevičius.

"I believe various options will be on the table right now but, in my personal opinion, those individual sanctions for people who mostly contributed to election falsification and violence against peaceful protesters would probably be the most effective," Sinkevičius told the Žinių Radijas radio on Wednesday.

The European Union is now considering tough sanctions for Belarus, he said, adding that bolstering civil society could be one of EU's main goals.