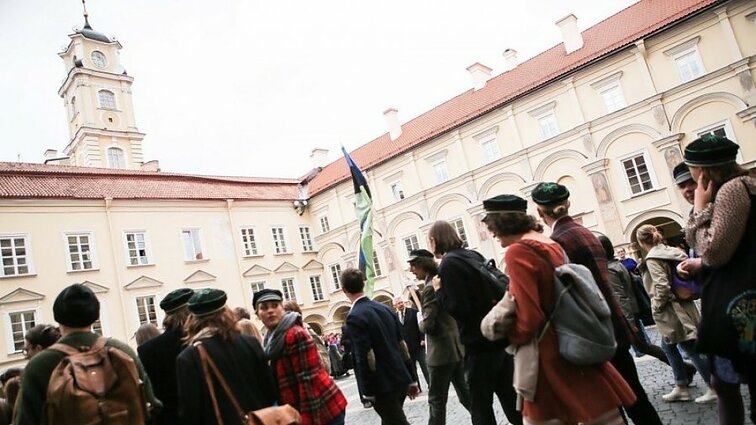 President Dalia Grybauskaitė has proposed law amendments, requiring students to pass at least one national-level graduation exam in order to be accepted into a college or university.

President Dalia Grybauskaitė has proposed law amendments, requiring students to pass at least one national-level graduation exam in order to be accepted into a college or university.

College and university entrance is currently determined by results of school graduation exams and students can choose whether to take school-level or national-level exams.

The president proposed the amendments after meeting with academic community, employers' and students' representatives.

The amendments are intended to improve education quality. Currently, students who have failed all graduation exams can still study in higher education institutions, if they agree to pay for tuition.

Grybauskaitė said that "there are three and a half times more higher education schools per capita in the region than in the EU. The orientation is therefore towards quantity, not quality."

Robertas Dargis, the president of the Lithuanian Confederation of Industrialists, noted that Lithuania spends as much on education, as a percentage of the GDP, as other EU states or even more. Money, according to Mr. Dargis, is therefore not the problem, but the way it is being spent is.

If the amendments were adopted, universities and colleges would have to coordinate their study programmes so that they are more in sync with labour market needs.

The amendments could only take effect in 2018, because students have to be informed about changes at least two years in advance.

Currently, universities and colleges in Lithuania offer around 1,800 study programmes, but almost a third of them attracted only 10 or fewer students this year.

There are currently 47 higher education institutions in Lithuania.

Rūta Kačkutė, the Chief Advisor to the President on Education, Science and Culture, says education funding is sufficient but is distributed inappropriately. According to her, legal amendments proposed by Grybauskaitė are only the first step in solving education policy issues.

The chief advisor says concrete actions must be taken because Lithuania's higher education quality indicators are declining every year, even though quantitative indicators are good.

"Our higher education has been devalued, its quality is insufficient. First of all, this is highlighted by admission results. This year school leavers who received even just 0.34 of the maximum of 10 points were admitted to higher education establishments. Forty-four percent of employers and over 50 percent of investors are dissatisfied with the graduates' knowledge. This shows that graduates are not prepared for the labour market. Furthermore, as many as 55 percent of graduates take lower qualified jobs," the chief presidential advisor told the radio Žinių Radijas on Tuesday.

According to the chief advisor to the president, education funding is sufficient, but is used inappropriately.

"We have noticed that spending on education and studies in higher education establishments is decreasing, whereas the cost of building upkeep is rising. This was affected by funding from structural funds as well. I think we have turned everything upside down - a university must first of all provide professional programmes. We have 47 higher education establishments, which is by four and half times more than the European Union's average, and we are financing all of this. Thus a question arises if the investment is purposeful," Kačkutė told the Žinių Radijas radio.