And then came the flood. A dispatch from Lithuania's biggest island 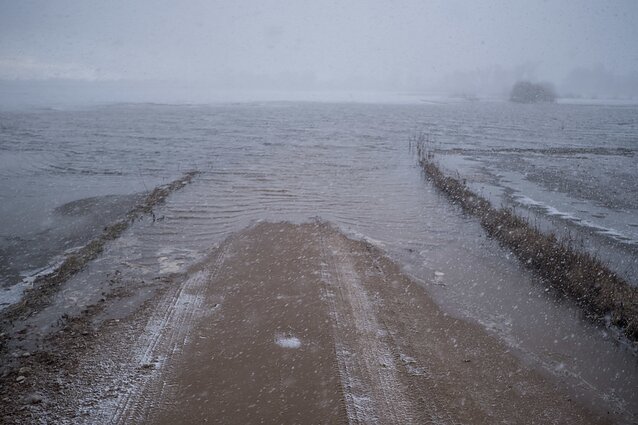 Flooded road in Rusnė. / A. Morozovas/LRT

For local residents of Rusnė, the annual spring flood is like a mythological creature. For some, it's a fascinating and regular adventure. Others, meanwhile, do their best to survive it without any major losses.

Often referred to as the largest island of Lithuania, Rusnė is situated in the delta of its biggest river, Nemunas. Almost every year, melting ice blocks the river, with water overspilling its banks and flooding the area.

People here address the flood as something alive. “Don’t park your car over there – it’s the territory of the flood. [...] The flood will probably come tonight.”

The annual flood of Rusnė is a social event that brings the community together – everyone is ready to help their neighbour. Even at night, people inform each other about rising water levels, and videos uploaded to the local social media group receive emotional reactions.

Many who choose to observe spectacular ice jams and the outburst of the river along the Rusnė promenade or travel to the Uostadvaris lighthouse.

During the thaw, the sense of the coming flood is in the air. When it finally begins, people start guessing how the situation will develop this year. The first signs of the flood come with the first shards of ice moving down the stream.

For outsiders, the meadows and roads in Rusnė look not much different from anywhere else, but the locals always see the landscape in the context of the flood – they know which roads will end up under water and which fields will turn into vibrant lagoons.

Boats kept in front of houses far from the river might raise eyebrows for visitors, but not for locals.

Edging along floating ice, I drive down a small meadow road straddling the Rusnaitė River. Suddenly, my wheels get stuck in the wet ground and the car grinds to a halt.

Help comes from Raimondas Plikšnys who quickly tows an unexperienced driver like myself with his SUV and suggests that I find the nearest dirt road – the water level is rising fast. 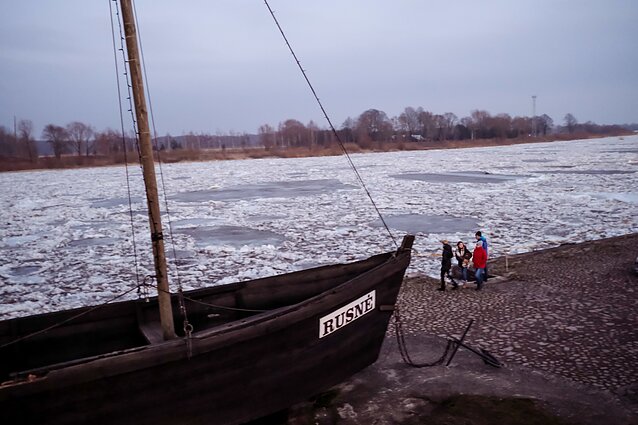 Just a few hours later, the unfortunate meadow road is under half a metre of water. Plikšnys, who is observing the flood from a deck in his yard, turns to prepare boards and move things still standing on dry ground.

“As there was no flood last year, lots of moles made it here,” he says observing a lawn perforated with heaps of black dirt left behind by moles. Later that evening, boats and the mole holes are surrounded by water.

After ice jams the river, the strength of the flood depends on many factors: on how much ice moves downstream, how much of the melting snow gets absorbed into the ground and how much streams into rivers.

Strong winds can also impact the direction of the flood water. If a dam in Kaunas opens its locks, a wave of water may also impact the situation some 200 kilometres down the river – the flood may rise or fall as a result. 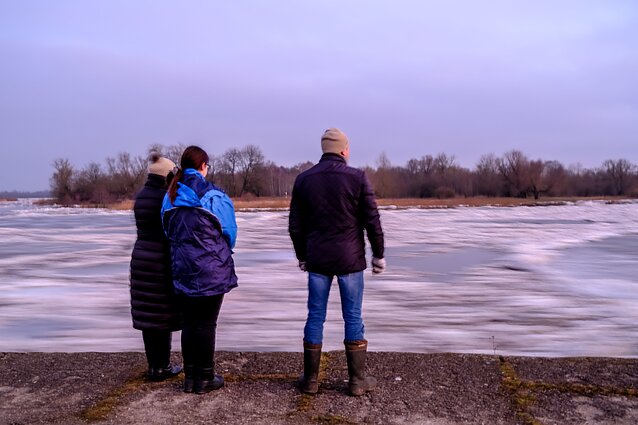 This mosaic of the possibilities in the delta involves everyone into an exciting exercise of guessing and making forecasts.

This year's flood is the first one when residents of Rusnė don’t have to worry about being cut off from the rest of the world. In May 2019, after decades of promises, the government finally built an overpass allowing local residents to safely drive over flooded areas. Without thinking about the danger, people from the island can reach the nearest town, Šilute, by the brand-new two-lane elevated road.

This year's flood is the first one to test the overpass. Its flooded pillars are clearly visible when one is driving on the road.

Most of the people living in the flood area are satisfied with the comfort provided by the overpass. In the morning, they no longer need to wait for an amphibian to carry their car across the flooded parts of the road or worry that an ambulance won’t make it to the island in time.

Yet some people are claiming that with the new overpass, the place has lost part of its charm and the romanticism of the flood. 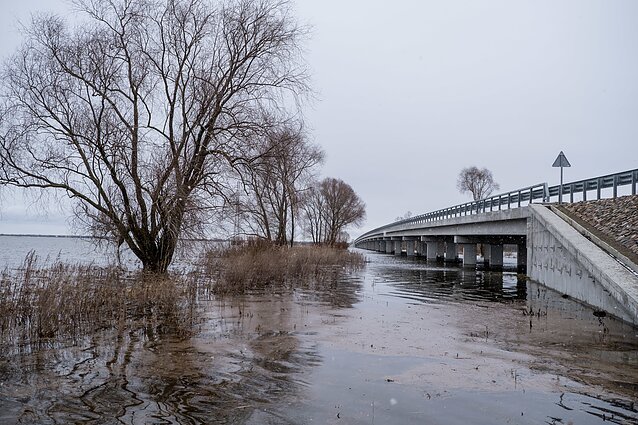 The newly-built highway linking Rusnė and Šilutė. / A. Morozovas/LRT

The flood as an adventure

Teresė Pukelienė lives with her son in a century-old house in Šyšgiriai village. On a sunny day, I meet them working outdoors. Flooded meadows are just a few metres away. After greeting me, they immediately ask if the path leading to the main road is already under water. I assure them it’s still dry and excited Teresė urges her son to cycle to the city.

“A spring without water is missing something. Last spring was bad, because the flood was very small. Now I start my day with checking if water has already risen. You can see it through the window. Sometimes I check how close water is even at night. You will see, if wind rises, more water from the lagoon will flow here,” she says.

For Teresė and her son, the flood is an anticipated adventure.

“Is it difficult for a person to live surrounded by water? It’s hard to say, but we don’t feel any difficulties. Over the years, I got used to it. I remember my first encounter with the flood. I was 16, walking back from the town, observing water getting closer, flooding meadows and roads. I tried to go as fast as I could to get home dry,” she remembers. 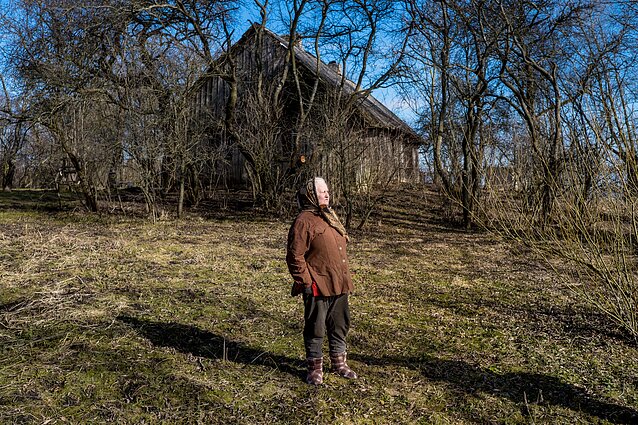 “Our house was built in 1903. I settled here more than 60 years ago. Since then, I have experienced some severe floodings. [...] Our homestead is the last one in the village, often we are completely surrounded by water. I remember when I was young, a neighbour would come with a boat and sail me to the old market in Šilutė,” says Teresė.

The flow of water carries the river’s fish into village canals. “Once they arrive, they remain here. In spring, fishermen can hardly find a place to sit. We catch pikes like smelts,” she smiles.

According to Teresė, the only time she hears about difficulties that people face in nearby villages is when she turns on the TV.

“Is it difficult to live in the countryside? I don't think so. It may not be easy for a young person, maybe strange. You know, I've worked and lived in the city for so many years. I wouldn’t want to live there.”

Teresė, like almost all the locals, was not born here. 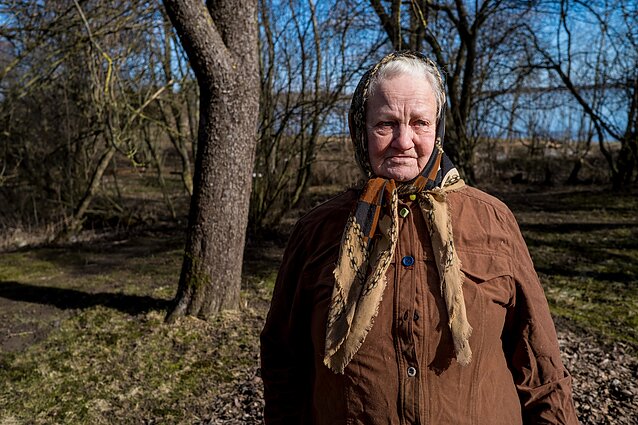 “This was German land as you know. Many families lived in this house before us. Their descendants used to come here in the past, but now it’s a place just like the rest of Lithuania. When permission was given to travel to Germany, people left en masse,” she remembers.

As we walk around Teresė's yard, she points to five homesteads that are still inhabited. Our conversation is interrupted by sounds of the LRT radio's news programme.

“We get our news from radio and television. We watch LRT and can also see 20 Russian TV channels. We are not disconnected – we listen, we follow,” she says.

“I don't have the internet and I am happy about that. I read books constantly, even when TV is on. Crime novels and historical books are my favourite. What I don't like is romance. I don’t watch romantic movies either. Over the years, I have collected over a hundred books. I bought most of them back in the old days. They used to be cheap, so after work in the city I would pass by the bookstore and get one,” says Teresė. 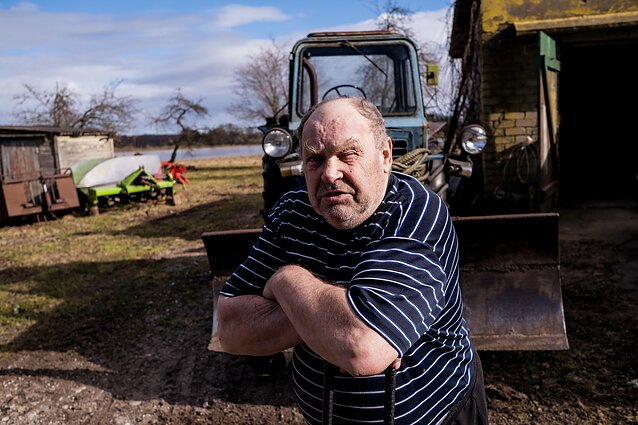 Bringing the community together

During the flood, Bronislovas and Aleonora never receive any visitors. Their house on a small hill is accessible only by crossing a few hundred metres of submerged road. In some places, water is almost a metre deep.

The family moved here from Kretinga some 40 years ago. According to them, after so many years, they are used to the floods and seclusion that it brings, usually lasting two to three weeks.

“A friend from the village of Šyša calls to tell us when his house is already flooded. This is how we get a warning about water coming. We get to the car and rush to the city to get essential goods: bread, meat, grains, flour, salt, oil. We have our own potatoes and some chickens,” says pensioner Jonas Bronislovas Krištupas. For many years he worked at a water pump station nearby.

Once, he almost lost his life during the flood. As he was driving on a flooded road with his tractor, the front wheels got into a deep ravine eroded by the current and the tractor overturned.

In the blink of an eye, water carried it off the road and Bronislovas was left trapped under water. Only by knocking out the windshield did he manage to swim out. He also rescued some wild animals trapped by the water.

“Bronius, are you mad?” Suddenly our discussion is interrupted by Aleonora bringing a sweater for her husband. 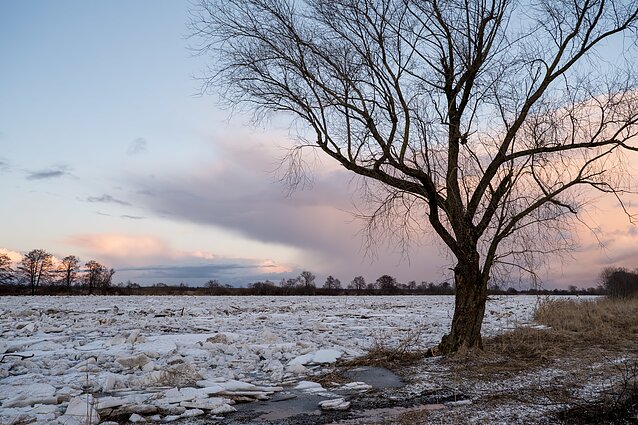 The couple describe the insular time during the flood: “In the morning we feed our chickens and dogs, bring back some firewood and do the rest of the housework. We got used to loneliness. We have two TVs and a phone. Several years ago, the flood was very big – it started in October and water stayed until spring.”

“When the flood starts, we’re on the watch constantly. Later it gets boring – a glance through the window is enough,” she says.

We sit surrounded by water and watch the news about the flood on TV. “This year they are trying to scare people more than ever. Perhaps you know if Kaunas Water Plant is planning to release water from the dam?” she asks.

Before moving here to live, Aleonora had been worried she wouldn’t fit into the unique local community.

However, she soon noticed how friendly people in the are were: “Everyone here is ready to help.”

“Due to the flood, people have to rely only on each other,” she says. “I've never argued with anyone here. The flood connects people.” 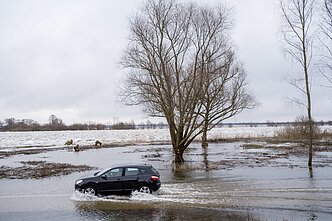 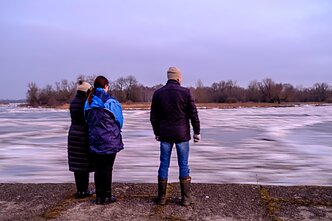 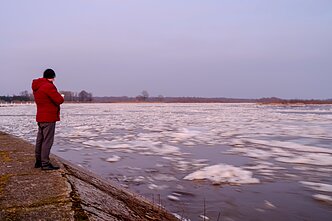 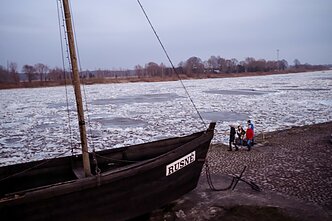 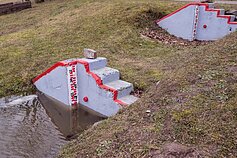 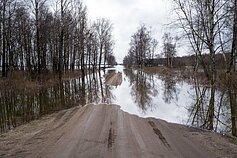 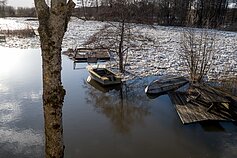