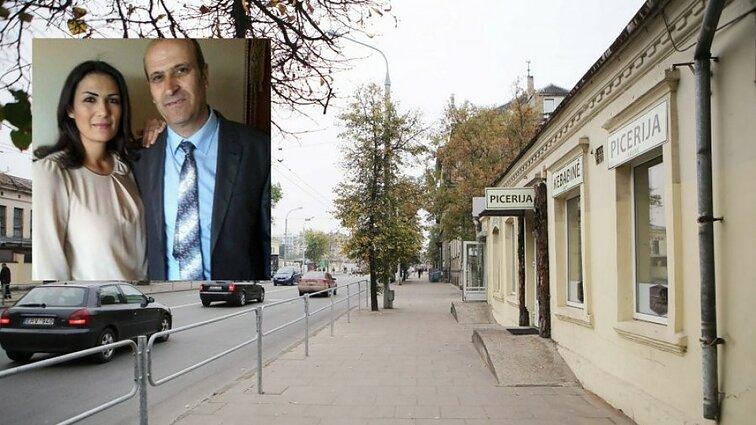 Pierre Naoum sold his property in Syria and invested the money into a pizza restaurant that he opened in Vilnius, Lithuania, where he was granted asylum.

Pierre Naoum sold his property in Syria and invested the money into a pizza restaurant that he opened in Vilnius, Lithuania, where he was granted asylum.

The business, unfortunately, did not take off and the Syrian, who had come to Lithuania with his family, had to close down without making any profit. He says, however, that the venture helped him understand what it takes to succeed in business, or at least find a job, in the country so far from home.

"Lithuania is at peace, very nice people. It's a fact that we, refugees, are treated well. When it comes to jobs and business, however, it's difficult. Those who want to get rich do not go to Lithuania, they do if what they seek are peace and friendly people," says 49-year-old Pierre who currently lives in Jonava with his wife and three children.

This small town you live in now offers even fewer opportunities to make a decent living, even for locals. How do you cope?

Initially, I opened a pizza restaurant in Vilnius, Kalvarijų Street, but I didn't do well.

There are many reasons, but two are key. First, Lithuania has a small population, even in the capital city people do not buy much because they haven't got much money. If there were, say, 10 million people and each spent a euro on food, that would amount to 10 million euros, enough to get things going.

The second reason is that people in Lithuania are used to shopping in giant malls, they buy things there, eat out, entertain themselves; which is why it's so difficult for small shops and inns to stay afloat.

Back in Syria, you ran several shops and were successful?

Yes. Not just in Syria, but in Europe - Belgium, Sweden, Germany - small businesses are thriving, although it's true that their owners must work hard to make profit. People there are accustomed to shopping in smaller boutiques, dining at family-run restaurants. It's less popular with Lithuanians. Those who do come are not enough to sustain a business.

Did you make any profit with your pizza place in Vilnius?

Frankly, no. I ran over 20-thousand-euro deficit. I purchased equipment, hired staff, but I didn't break even.

Did you invest savings or took out a loan?

I do not approve of loans. I invested the money I got in Syria from selling a piece of land by the sea. I bought it in peacetime, thinking of building a house there. Seven or eight years ago, it was worth about 100 thousand US dollars. Unrest in the country pushed real estate prices down and I sold it for 25 thousand dollars, almost all of which I spent trying to create a job for myself in Lithuania.

I looked into job opportunities while visiting my relatives who live in Germany, Sweden, Belgium, the Netherlands, but the temporary residence permit Lithuania gave me does not permit working in other European countries. I can go anywhere and stay for up to 90 days, but I cannot make any money during that time.

In Lithuania, I looked for a job online, in classifieds, I sent out my CV, but I wouldn't even get a reply. I looked for job on my own, but unsuccessfully. I went to other European countries, but I couldn't work there, so I tried opening a restaurant. Unfortunately, it didn't go as well as I hoped.

You and your family came to Lithuania as refugees three years ago. How do you support yourself?

At first, the government gave the five of us 600 euros a month. At the beginning of this year, we would get 480 euros and now we are entitled to 440 euros per month. We are very grateful for the state and people of Lithuania, although it's hard to survive on that for a family of five.

The most important thing, however, is that my family is safe here, my children attend a Lithuanian school and no one segregates them from other students - they are getting the same education as Lithuanian pupils, although they are Syrian.

Did your wife find a job that fits her qualifications?

In Syria, she was a teacher, but she had tougher time in Lithuania than I did. I at least speak Russian, while she didn't know either Lithuanian or Russian. After graduating from a cosmetology course, she had an offer from a beauty salon in Jonava. I hope she can stay on and have the job after her internship finishes.

We have offered our services as translators from modern Aramaic and Arabic to various organizations. I do some work as translator, but my services are not in great demand and it's not enough.

Do you know that a Facebook group, "Help for refugees in Lithuania", is using social media to find you a job?

For which I am very grateful. Lithuania has become a second home for my family and we will never forget it. I realize that I won't be able to work as engineer in Lithuania, but I'm open to any offers.

Lithuania is set to welcome 1,105 refugees, mostly from Syria. Is that many or few?

One's homeland is like a big house, so when you invite people, you must know who they are, so that your nation is not in discomfort. Taking in people without screening them is risky. Faith is also important.

The refugees who are coming to Lithuania will face the same problems you've spoken about: big cities offer more job opportunities, but there's not as much accommodation or rents are high. Smaller towns have fewer jobs.

Our family is in a similar situation. In Vilnius, renting a two-room or a three-room apartment would cost 400-500 euros. Sure, if you had a good job, you could afford it. But when you don't have a job, living in a city is very difficult.

What will be the priorities for refugees who will come here?

First, to learn at least some Lithuanian, which will not only give the opportunity for children to seek education, but will also help understand traditions, everything. If you don't know the language and can't talk to people, how are you to look for a job? So that's the priority.

Second, refugees coming to the country should know Lithuania's law. It would be disrespectful to live according to their own. After you get to know the language and the law, it's easier.

Do you think you left Syria just in time three years ago?

Yes, because neither money nor social status we had home mean anything when there's a war going on. You realize then that the most important things are your health and peace.

We decided to leave Syria after an explosion near our home rocked so hard that it shattered our windows. We lost relatives to the war, three women in the family and a daughter. It was a catastrophe and after several armed raids in a private Christian school, where we sent our kids as well, we decided there was nowhere to hide.

Our children still remember terrorist storming the school, firing their shotguns into the air. It was getting increasingly worse. We had several shops, but had to close down.

My brothers and sisters also fled to Europe, I have just one sister remaining in Syria. We talk to her when there's internet connection - you know, war is war.

When your family is in danger, you can't find peace yourself. As if my soul were still in Syria, just the body here. Each day I follow reports on the killed people: five people I know by sight one day, six the next day, neighbours, relatives, acquaintances.

There is only one way to solve the refugee problem - to somehow settle the situation in Syria. Ninety percent of the refugees do not have the goal of reaching Europe, they are fleeing war and atrocities. It's bad for everyone there right now: both Muslims and Christians. The latter are doubly disadvantaged.