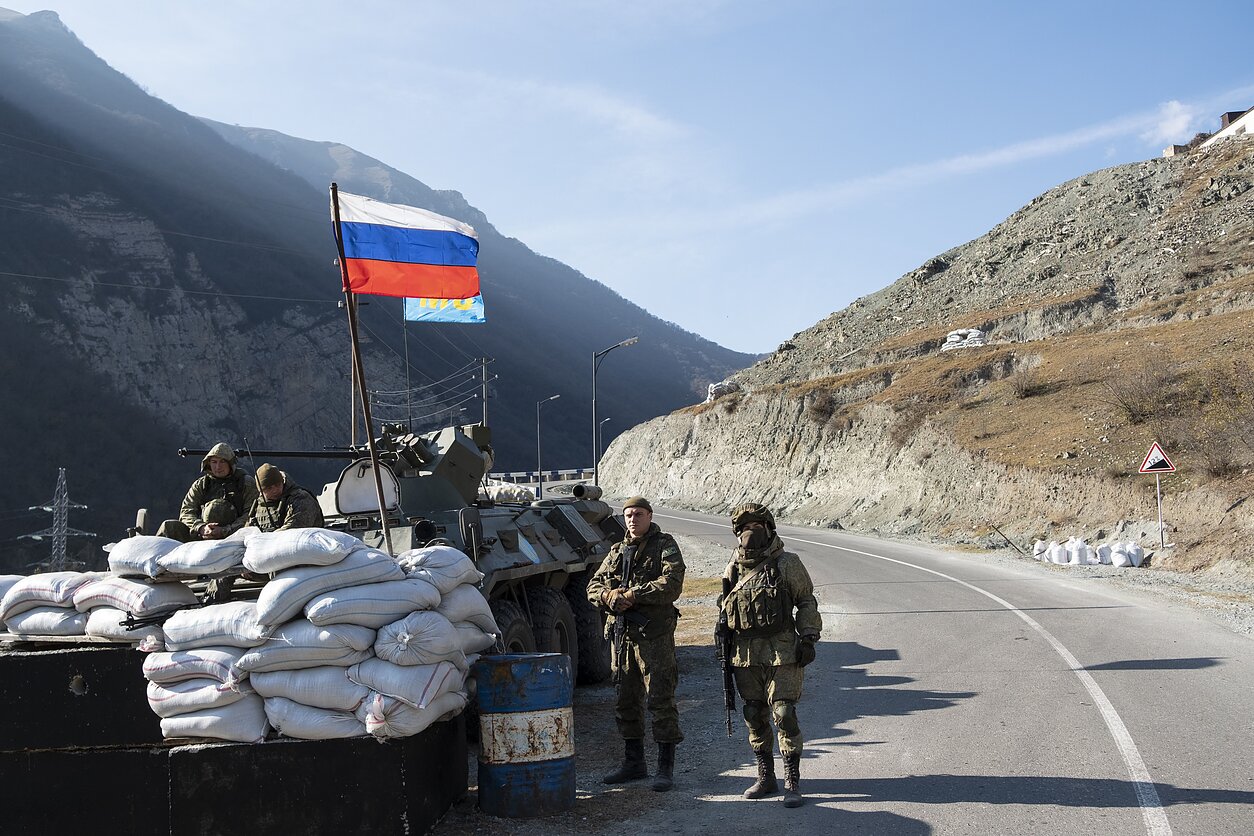 After brutal war, life and fear returns to Karabakh – through lens of Lithuanian photographer

A stream of refugees is returning to Karabakh after weeks of brutal conflict and on the heels of the scorched earth policy of the retreating Armenians. Lithuanian photographer Mykolas Juodelė was there to follow them.

A group of soldiers on a public bus leave the shattered frontline behind, back on their way to the Armenian capital Yerevan after a ceasefire deal that ceded almost three quarters of the pre-war territory to Azerbaijan.

They are bitter. The country was left isolated and without support as a Turkish-backed onslaught by Azerbaijan broke the decades-old frontlines. “The European Union was quick to put sanctions on Russia over the poisoning of Alexei Navalny, where is the EU now?” cursed one of them.

But not even Russia could halt the offensive that began on September 27. Azerbaijan, meanwhile, said it had merely recaptured its own territory lost to Armenia after the first Nagorno Karabakh War in 1988–1994 that left over 17,000 dead and 50,000 wounded on both sides.

Finally, on November 10, the Russian-brokered ceasefire came into effect. By many in Armenia it was seen as a sell-out.

Read more: How Baltics tried and failed to end war in Karabakh 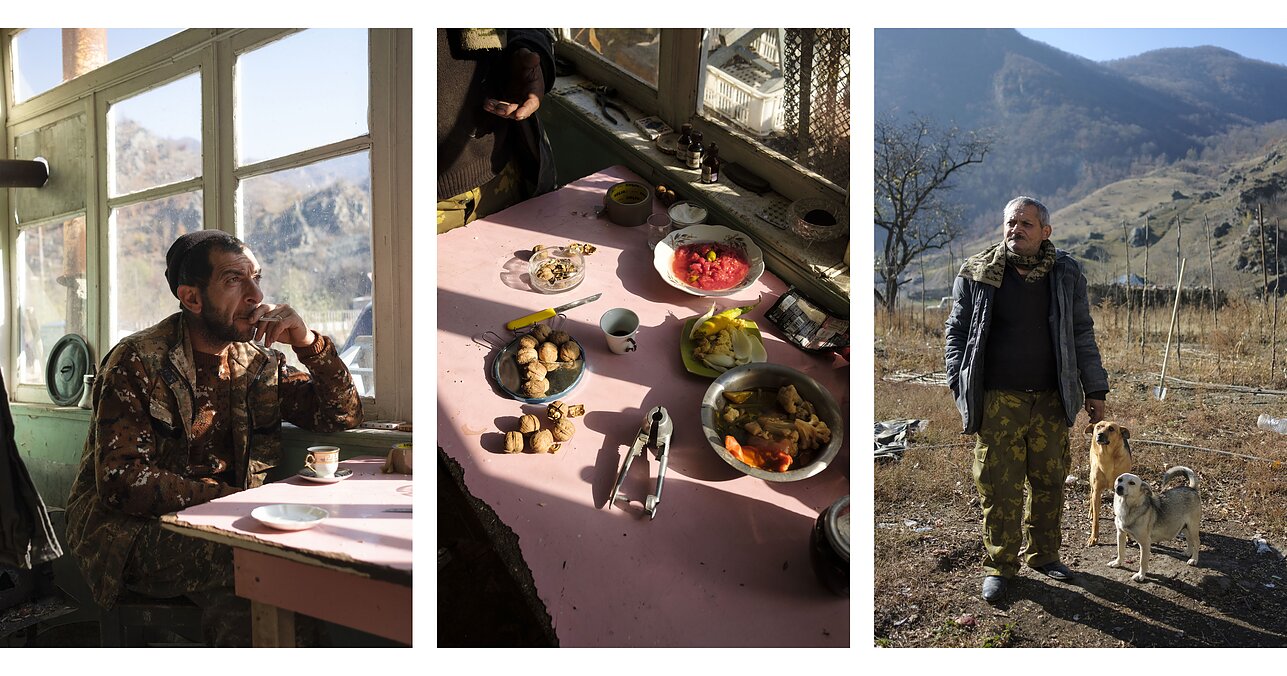 Residents of Kalbajar have their last breakfast at home before the area is handed over to Azerbaijan. On the right, Volodya and his dogs bid farewell to their garden in Kalbajar for the last time. / M. Juodelė

People pay a final visit to Dadivank Monastery, an important holy site for Armenians dating back to the 13th century, before the area is given to Azerbaijan. / M. Juodelė

While crowds were gathered around Yerevan’s Opera house calling for Armenian Prime Minister Nikol Pashinyan to step down, I took to the road and travelled to post-war Stepanakert, the capital of the breakaway republic.

I entered Artsakh’s Kalbajar – a district that was supposed to be passed on to Azerbaijan two days prior, but the deadline was extended to November 25 upon request of Armenia which was struggling to evacuate its citizens from the territory in time.

The stunning mountainous landscape was dotted with burned out houses in a land that only nine days later would be called Azerbaijan. 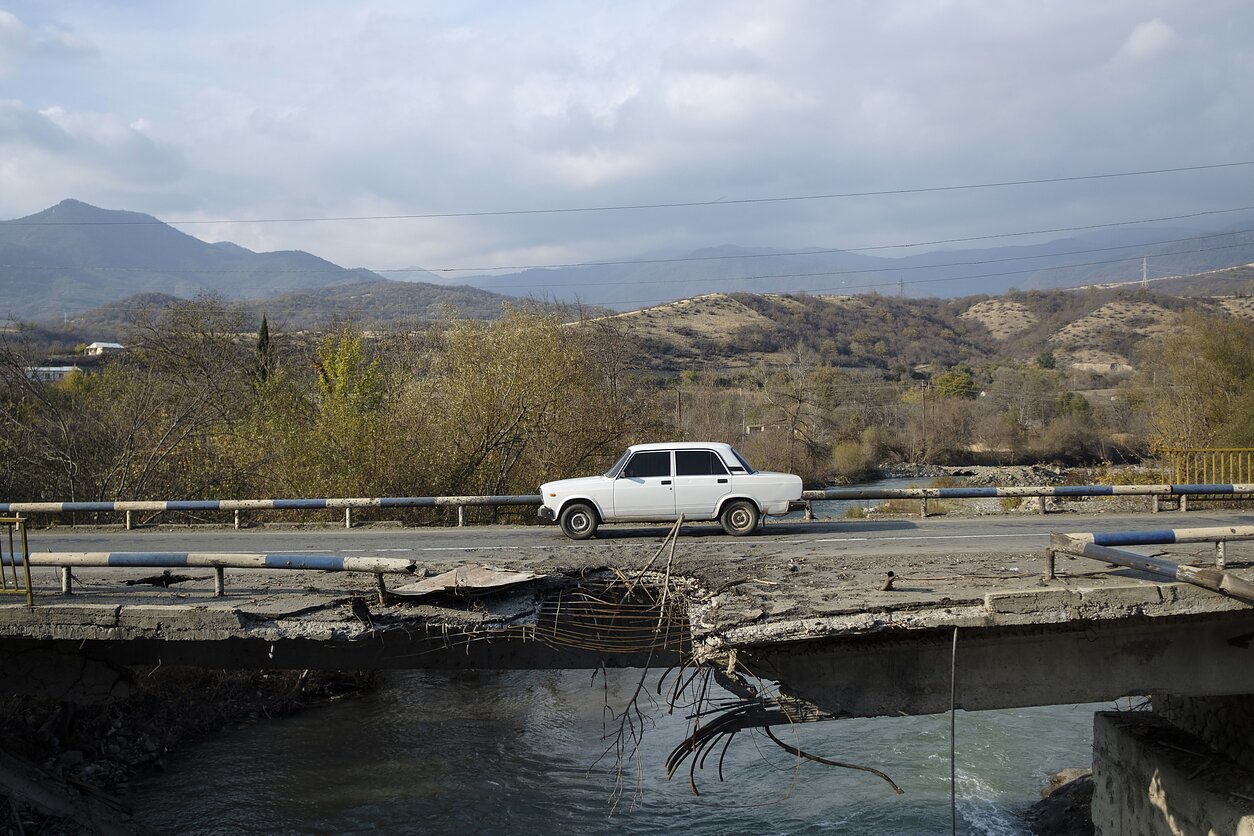 Displaced people reunite with their loved ones as they return to Stepanakert after the war. / M. Juodelė

Locals forced to leave their homes at short notice loaded their belongings onto trucks, ripped off rooftops of their houses, chopped down trees and set ablaze whatever else that could not be taken.

The insides of slaughtered cattle were piled up in front of the doors of some houses as if to give the nastiest possible welcome to the new residents.

A week after the ceasefire agreement had been signed, the city of Stepanakert remained largely abandoned. Solitary figures roamed misty streets still full of broken glass. There was no Internet, water or electricity.

Few shops were open, but they didn’t have much to offer besides biscuits and canned food. What is abundant in post-war Stepanakert, however, are fear and rumours.

Many were reluctant to come back, worried Azeris would shell them from their positions in Shusha, a city perched on a hilltop overlooking Stepanekert just five kilometres away. Some tell stories of dogs shot by Azeri snipers to intimidate the returning population. Others speak of a guerrilla resistance force ready to keep fighting. 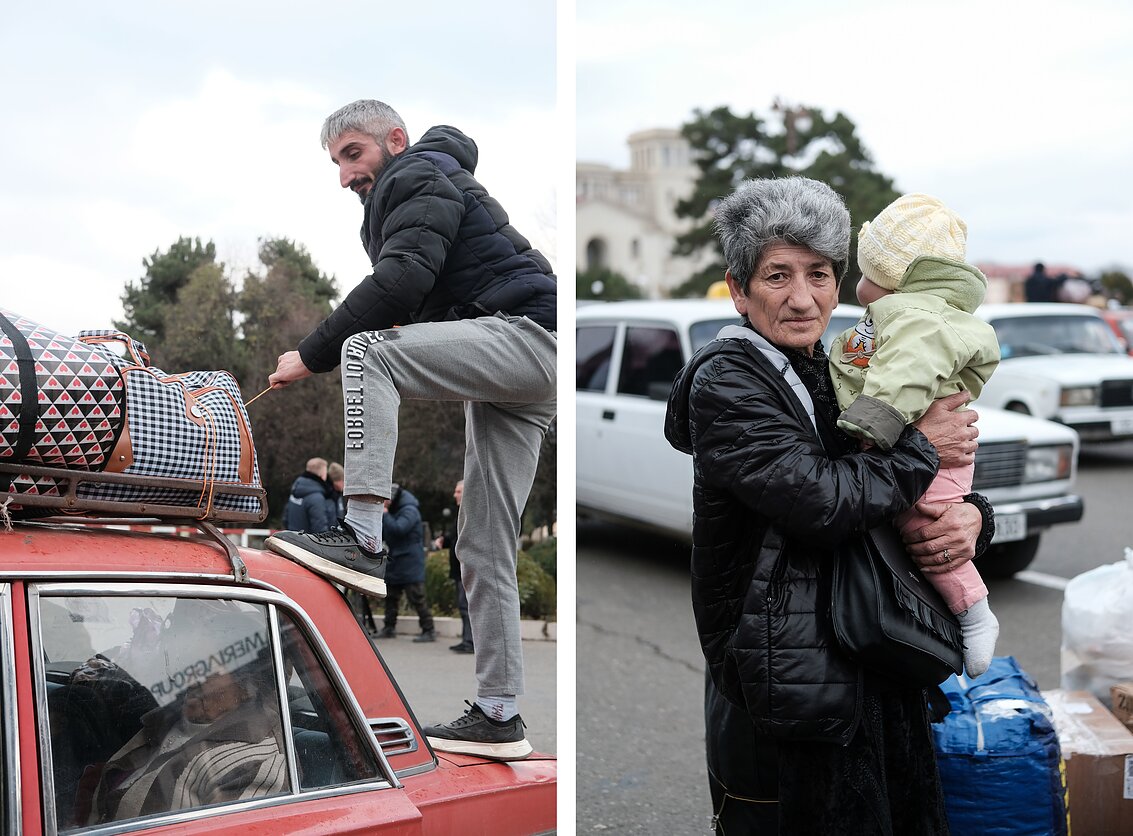 People queue in front of the municipality building in Stepanakert, waiting to receive food aid packages. On the right, a resident of Stepanakert returns to his grandparents’ home, empty since the war started. / M. Juodelė

As days went by, however, fear subsided, and Stepanakert’s central Renaissance Square was swamped with dozens of buses arriving from Yerevan every day, carrying displaced people back to their homes.

A young Armenian soldier whose wife and mother just arrived from Yerevan invites me for dinner at their place.

As soon as we enter their home, power goes out in the whole district. We cook dinner on a gas stove and raise glasses of wine to Arman‘s friends who died while fighting in Shusha, the same mountainous town that was considered impregnable by Armenians until Azeris took it on November 8. 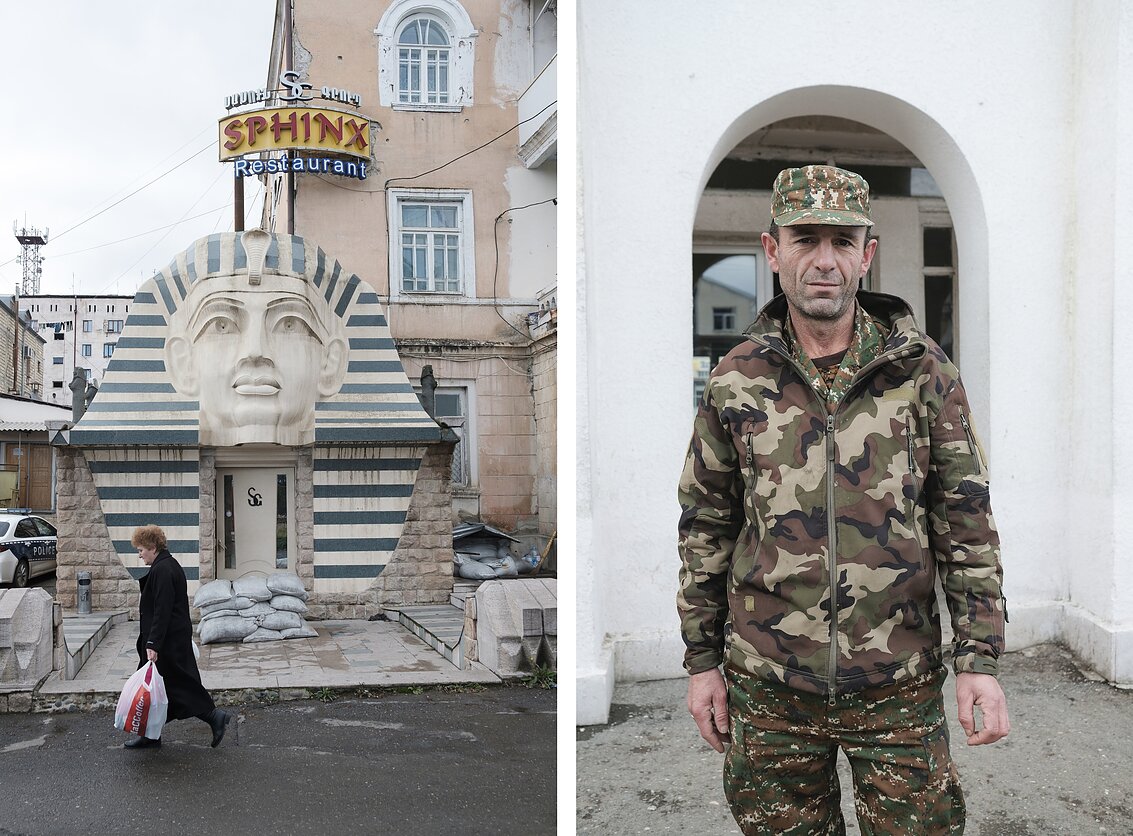 Sand bags – a sign of the recent fighting – in front of a restaurant in Stepanakert. Soldiers are still a common sight in the streets of Stepanakert. / M. Juodelė

Defense barricades remain on the streets of Stepanakert a few days after the war. / M. Juodelė

Valerik, a hairdresser, was one of the few people to remain in Stepanakert during the war. / M. Juodelė

Life returns to Stepanakert. On the right, electric cables are being reinstalled in Stepanakert. / M. Juodelė

Back in Yerevan, the same ceremony is repeated every day at Yerablur’s Military Memorial cemetery. From morning until daylight fades, a motorcade appears at the entrance, a coffin of a young soldier is brought in by young servicemen, a priest conducts the service, and soldiers fire a three-round salute.

The coffin is lowered down amid people throwing handfuls of soil and flowers. Moments later, a tractor shows up to finish off the job quickly. A mere 15 minutes passes and another motorcade appears; the procedure repeats. 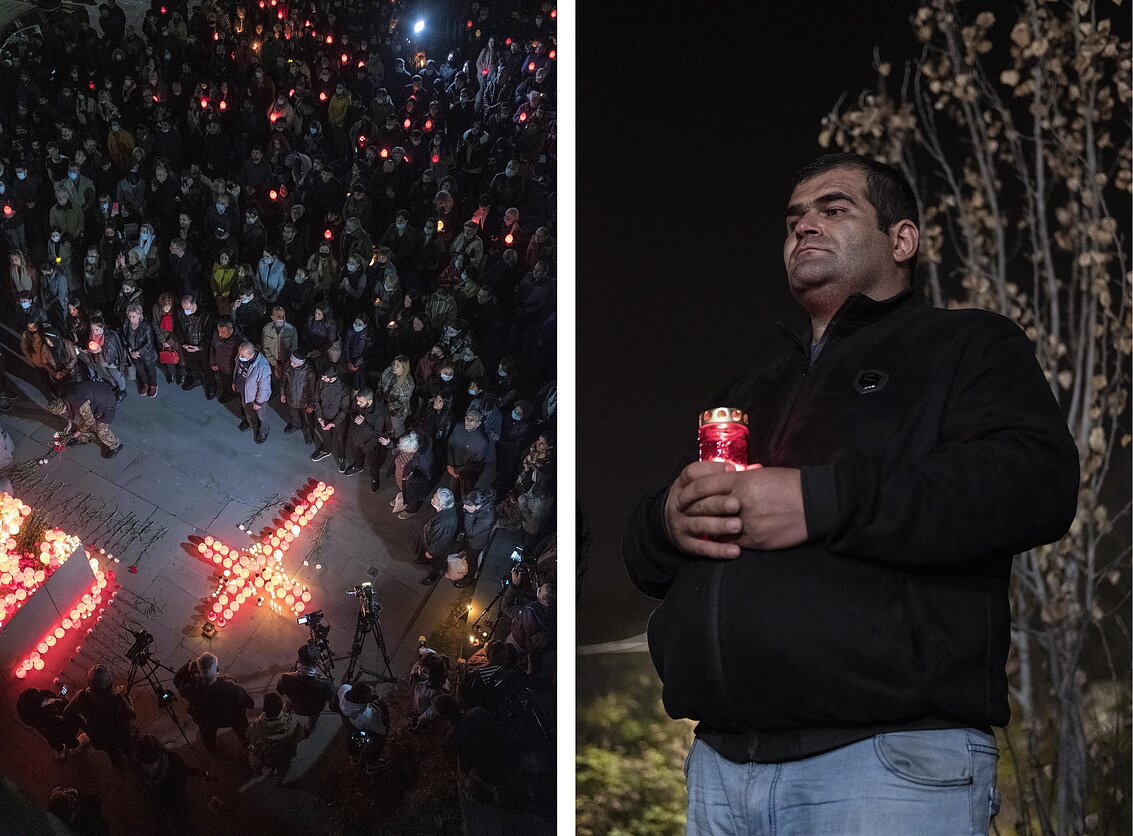 Thousands of Armenians in Yerevan held a vigil for the soldiers that died in the war. / M. Juodelė

A month after the ceasefire, as Armenia and Azerbaijan exchange bodies and calculate their losses, there are few signs of reconciliation.

A sudden ceasefire agreement has sparked a vicious reaction from the Armenian opposition supporters who called for Armenian Prime Minister Nikol Pashinyan to resign. / M. Juodelė 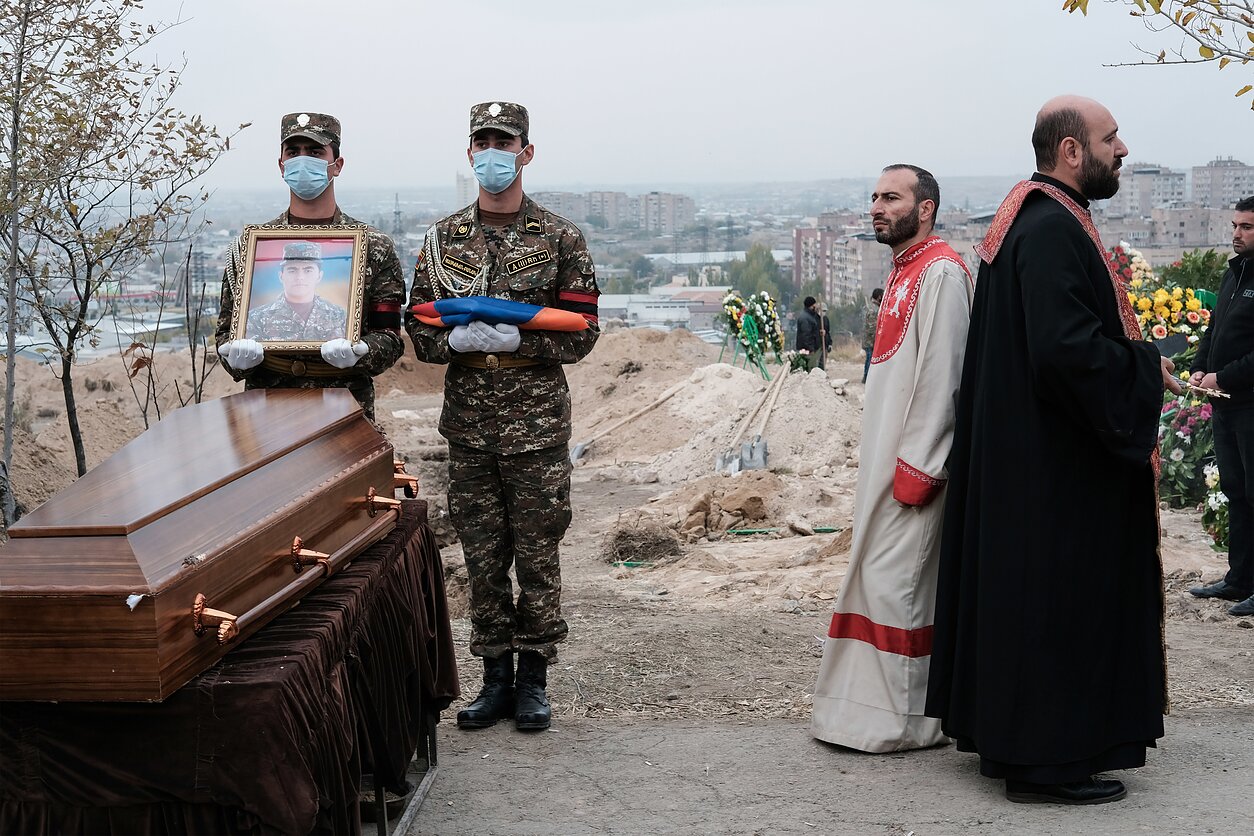 The burial ceremony of a killed soldier at Yerablur’s Military Memorial Cemetery in Yerevan. / M. Juodelė

According to the official figures given by the Armenian government, the country has lost 2,718 men, most of them are laid to rest at Yerevan’s Yerablur Military Memorial Cemetery. / M. Juodelė