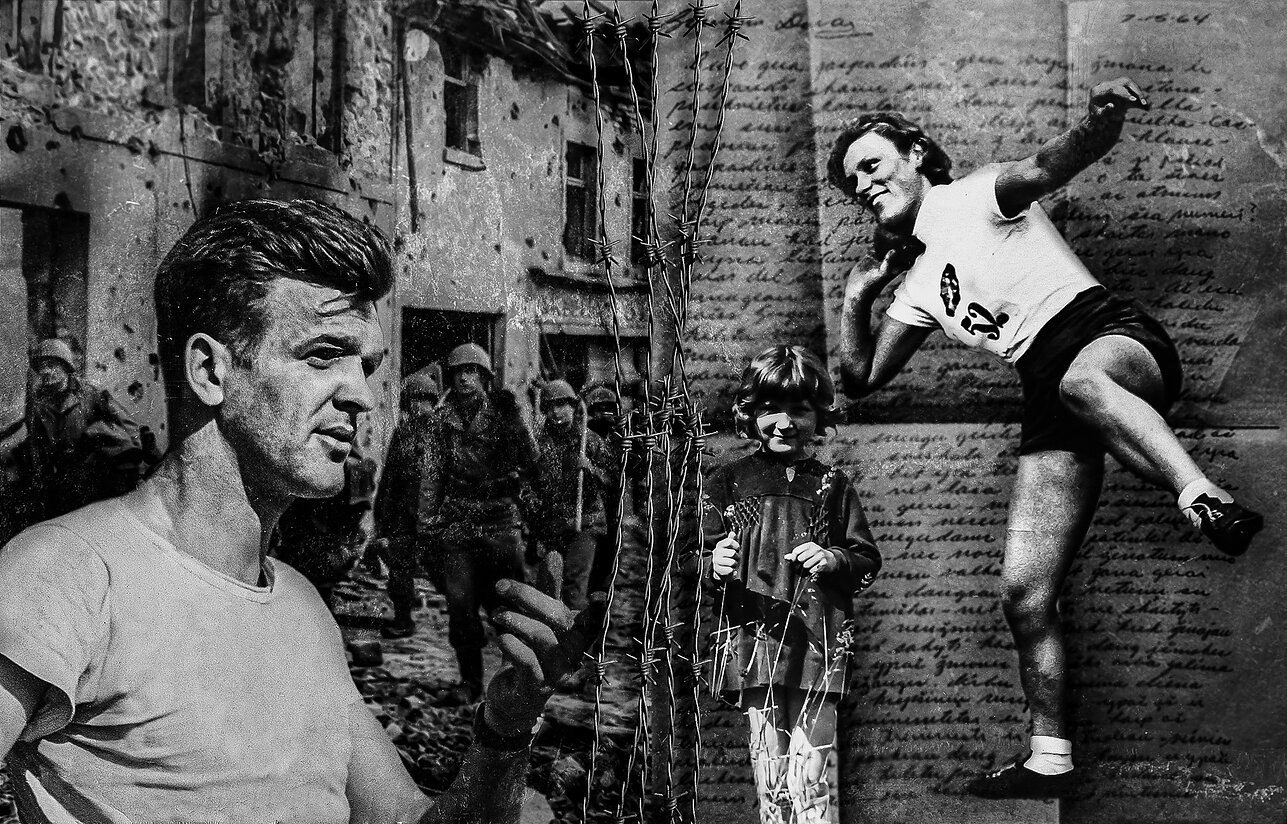 Champion who disappeared. Wife begged to save daughter from Siberia as he fought Nazis in Europe

American-Lithuanian basketball player Mykolas Ruzgys spent almost two years in Lithuania. During this time, he became a European champion and married his first wife Danutė. But as the Second World War dawned, the family’s misfortunes began.

The Soviet occupation in Lithuania forced Ruzgys to leave his family and go back to the United States. While he became a successful basketball coach in Western Europe, his loved ones suffered repressions in occupied Lithuania.

LRT.lt presents the newly discovered tragic life story of Mykolas Ruzgys, an American-Lithuanian basketball player and a European champion. The second part of the story talks about the fate of Ruzgys’ family after their separation. Read the first part here.

Military service and life in France

The first story in the series talked about Ruzgys’ return to the US after the Red Army entered and occupied Lithuania on June 15, 1940.

Until the very minute he had to board a train and leave Lithuania, Ruzgys hoped that he could take his pregnant wife Danutė Vitartaitė-Ruzgienė along. But the occupational government complicated the woman's departure. 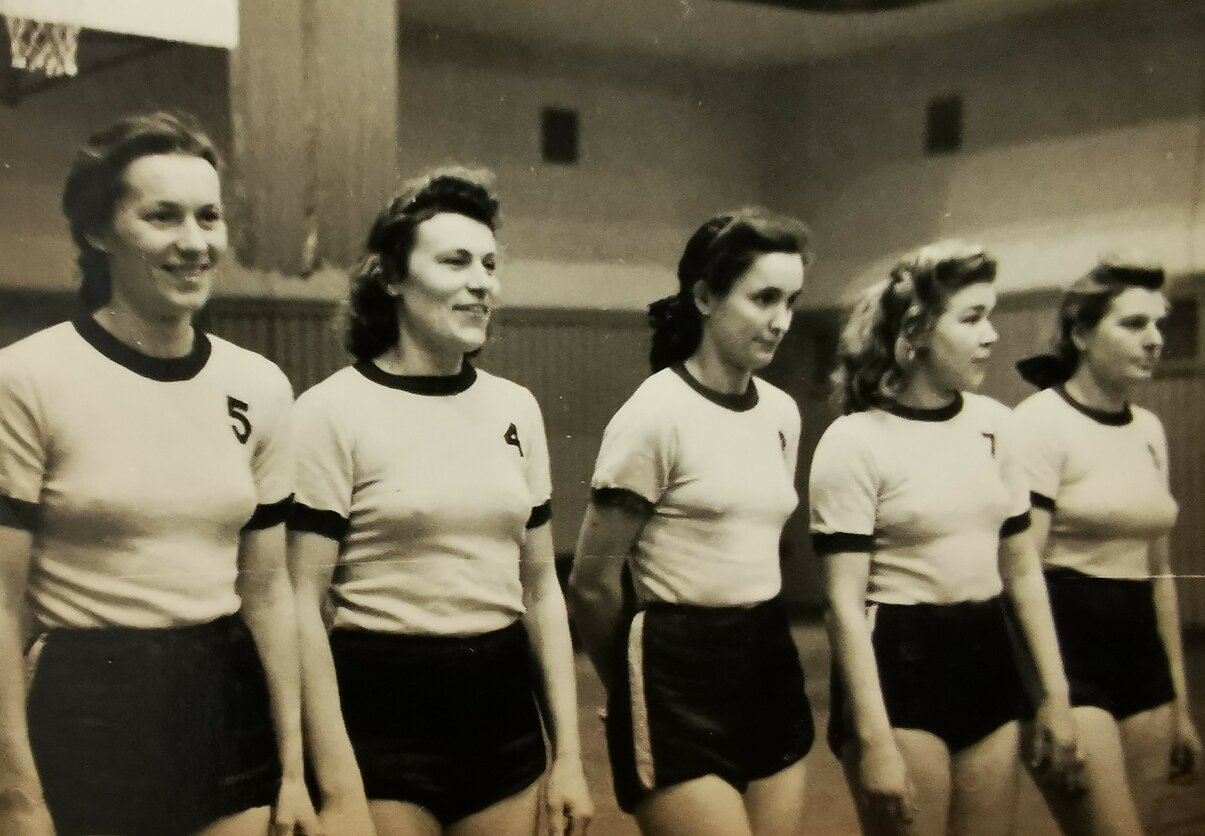 American citizens could freely escape occupied Lithuania, with the US embassy in Kaunas covering their travel expenses. Vitartaitė-Ruzgienė also talked to various institutions, but she was not allowed to leave, even though her newborn daughter was entitled to the American citizenship.

Hopeless, the woman returned to her parents’ house in Girelė village near Šiauliai.

In 1941, when the Nazis captured Lithuania from the Soviets, Vitartaitė-Ruzgienė was appointed to work as an English teacher in Telšiai. Two years later, she came back to Šiauliai and worked at a girls’ school.

There isn’t much information about Ruzgys’ life after his return to the US. It is known that, for some time, he worked at a company called New York Life Insurance.

Documents found at the Balzekas Museum of Lithuanian Culture in Chicago revealed that Ruzgys started his service in the US military on October 31, 1942. On the service card, he noted that he was married to Dana Anna Ruzgis. 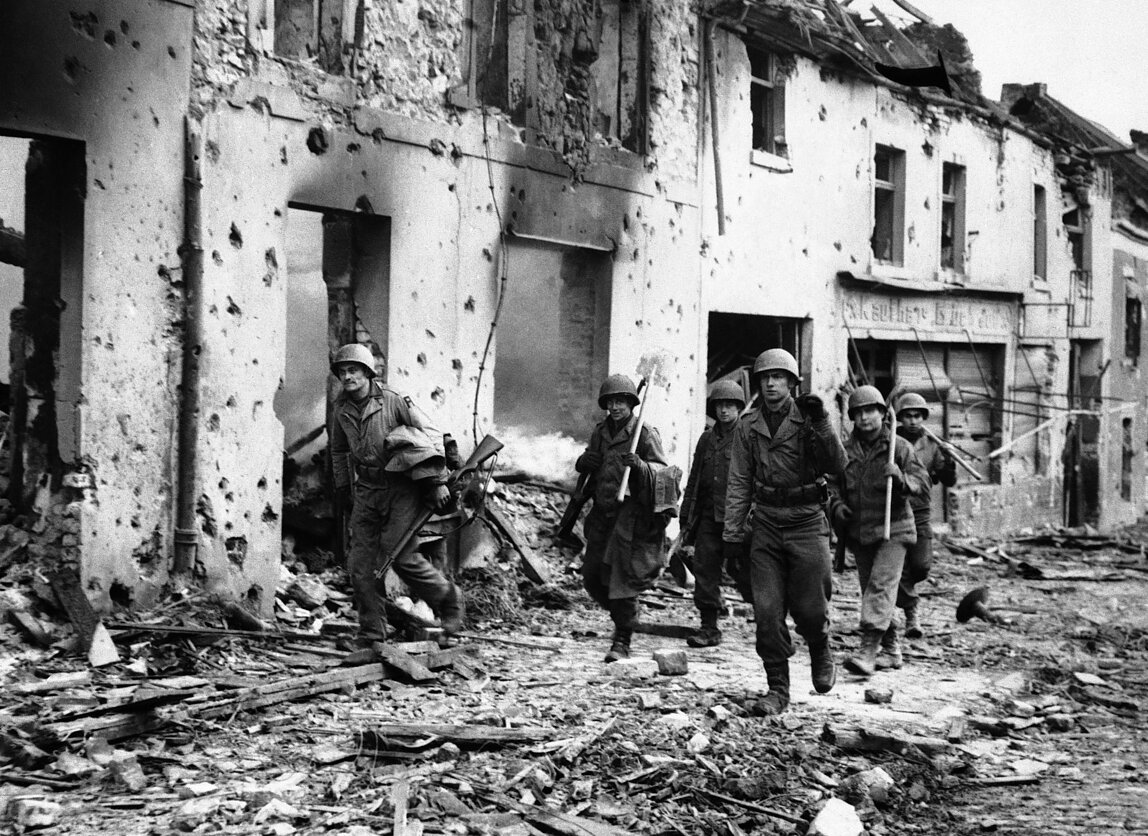 Ruzgys’ division was transferred to Europe on January 21, 1945. They crossed the Rhine and moved deeper into Germany that was getting closer to capitulation. He also took part in the liberation of Ohrdruf concentration camp in April 1945.

Germany surrendered on May 8, 1945, but Ruzgys remained on the active US army list until February 26, 1946. After the war, the athlete settled in France and started coaching its national basketball team.

Many French basketball professionals died or were injured in the war, while those who survived were not focused on sports anymore. Therefore, the American-Lithuanian player contributed to the resurrection of the game that had been forgotten during the war.

Ruzgys and his wife Danutė were exchanging letters for some time, but their correspondence was monitored by the Soviet secret services. The regime saw an opportunity – they tried to use Ruzgys’ family in Lithuania to entice him to coach the Soviet national basketball team.

The athlete’s wife found out about this offer much later from a letter sent by Leonas Baltrūnas, a 1939 European champion and Ruzgys’ teammate. Danutė’s sister, Laimutė, remembered the story. 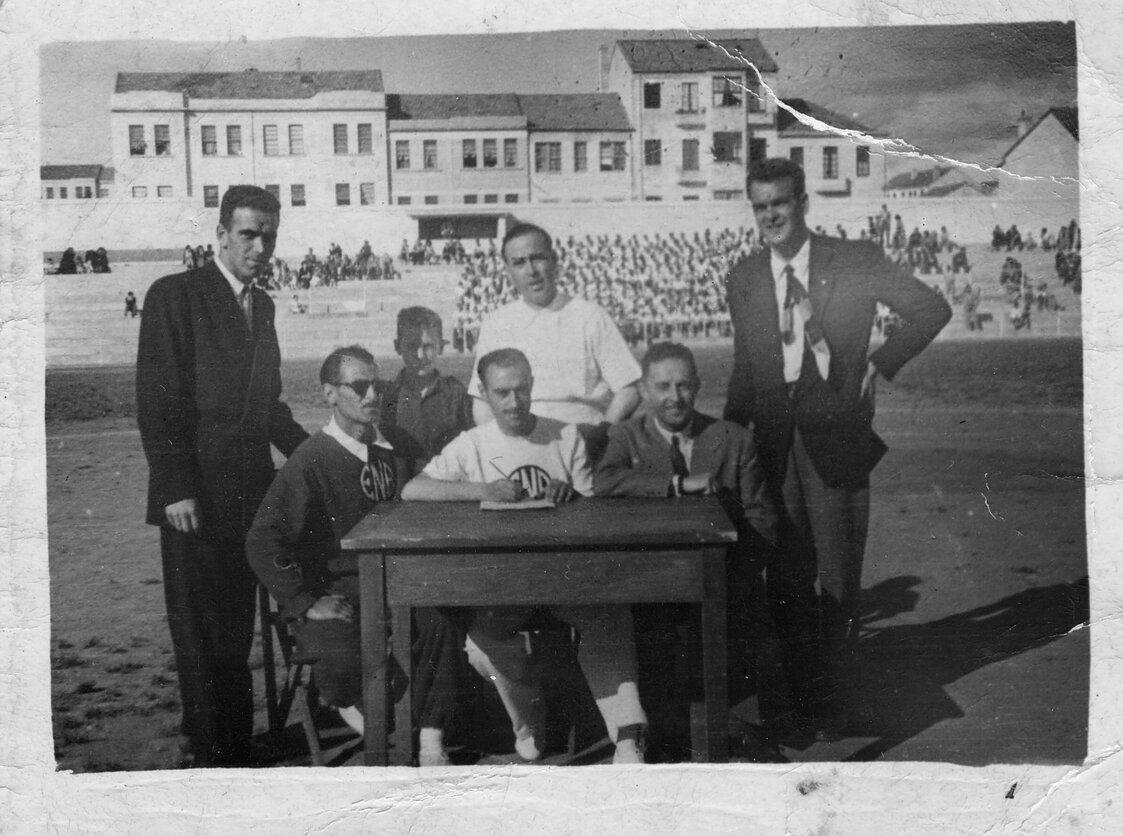 Mykolas Ruzgys (first on the right), in western Europe after the war. / Personal photo archives

“My sister was trying to go to the US and was sending letters to various institutions,” the woman said. “Then, the Soviets decided to contact Ruzgys with an offer to come and train Russian basketball players in Moscow. He was promised a flat and an opportunity to live with his wife and daughter.”

“Baltrūnas later told Danutė that Ruzgys did not accept the offer, saying ‘I will not go to the country of criminals’,” she added.

Later, Danutė was punished for her connections with Ruzgys who refused to work for the Soviets. The woman was pressured to renounce her marriage and was threatened to be left jobless.

In 1988, during the Perestroika period in the Soviet Union, Vitartaitė-Ruzgienė received permission to go to Australia, where she participated in a sports veterans’ event. The travel request submitted to the KGB, now located in Lithuania’s archives, revealed interesting details.

“Vitartaitė’s ex-husband Ruzgus Mykolas Mikalovič lived in Lithuania in 1938–1940 and left for the US in 1940. He was declared missing in 1953 and the couple was divorced,” the KGB document said.

After the war, Vitartaitė-Ruzgienė’s life was complicated. She moved to Vilnius in 1948 and worked as a physical education teacher at the Žalgiris sports association. Her daughter Lidija became deaf after falling out of a cradle as a baby. Every Monday, her mother would take her to a boarding school for the deaf, where she stayed until weekend. 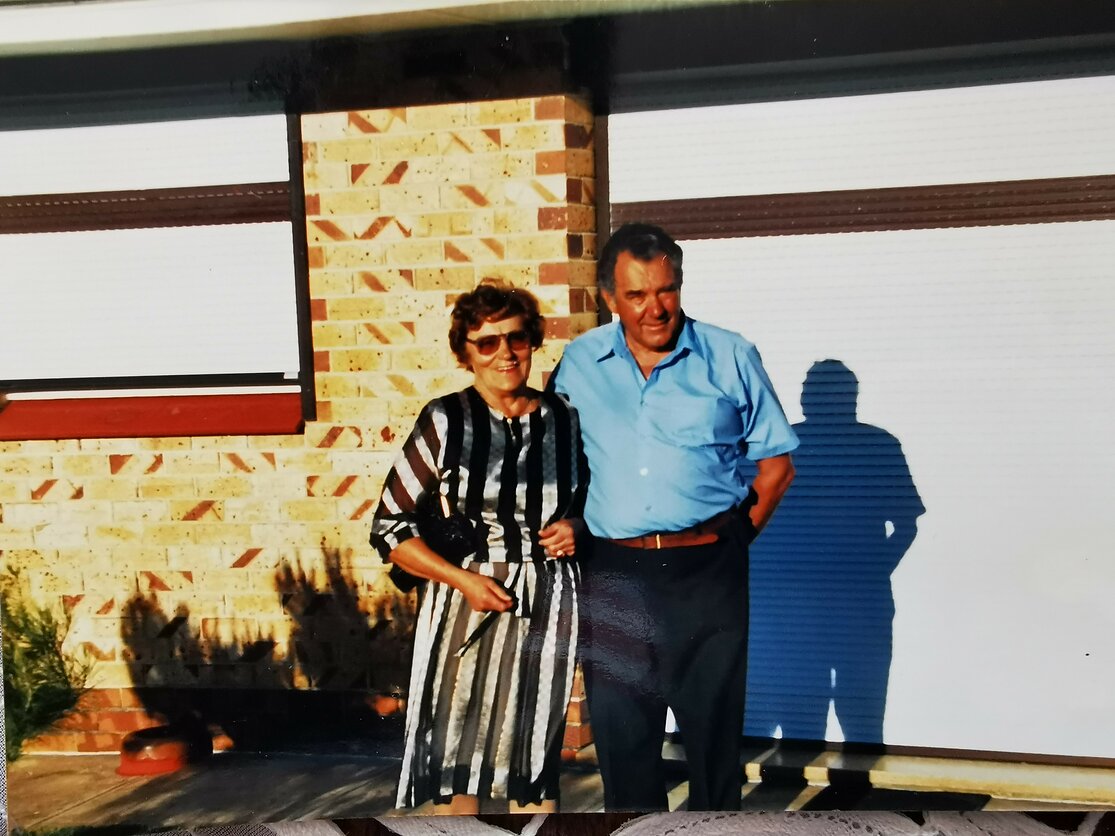 Ruzgys’ wife recalled this period in a 1997 interview with the daily Lietuvos Žinios.

“Life wasn’t successful. Mykolas left. I was alone with the baby. My husband was sending letters, inviting me to come [to the US], but we were not allowed to leave. Soviet secret agencies were constantly following us,” she said.

“Little Lidija accidentally hit her head. She became deaf and lost her speech. My parents helped me raise the child, but they were deported. I did not have a normal job for a long time,” the woman added.

Laimutė Vitartaitė-Poželienė recalled more details about the exile to Siberia that her sister mentioned in the interview.

In March 1949, Lidija, who was eight years old at the time, visited her grandparents and teenage Laimutė in Girelė village where they lived.

One evening, their neighbour Stasys informed the family that they would soon be deported to Siberia. Laimutė’s father could not understand why the Soviets wanted to deport him, as he was only a small farmer.

Nevertheless, the Soviets came for the family three days after the mysterious message from Stasys. According to Vitartaitė-Poželienė, their connection to Ruzgys had nothing to do with the family’s deportation. 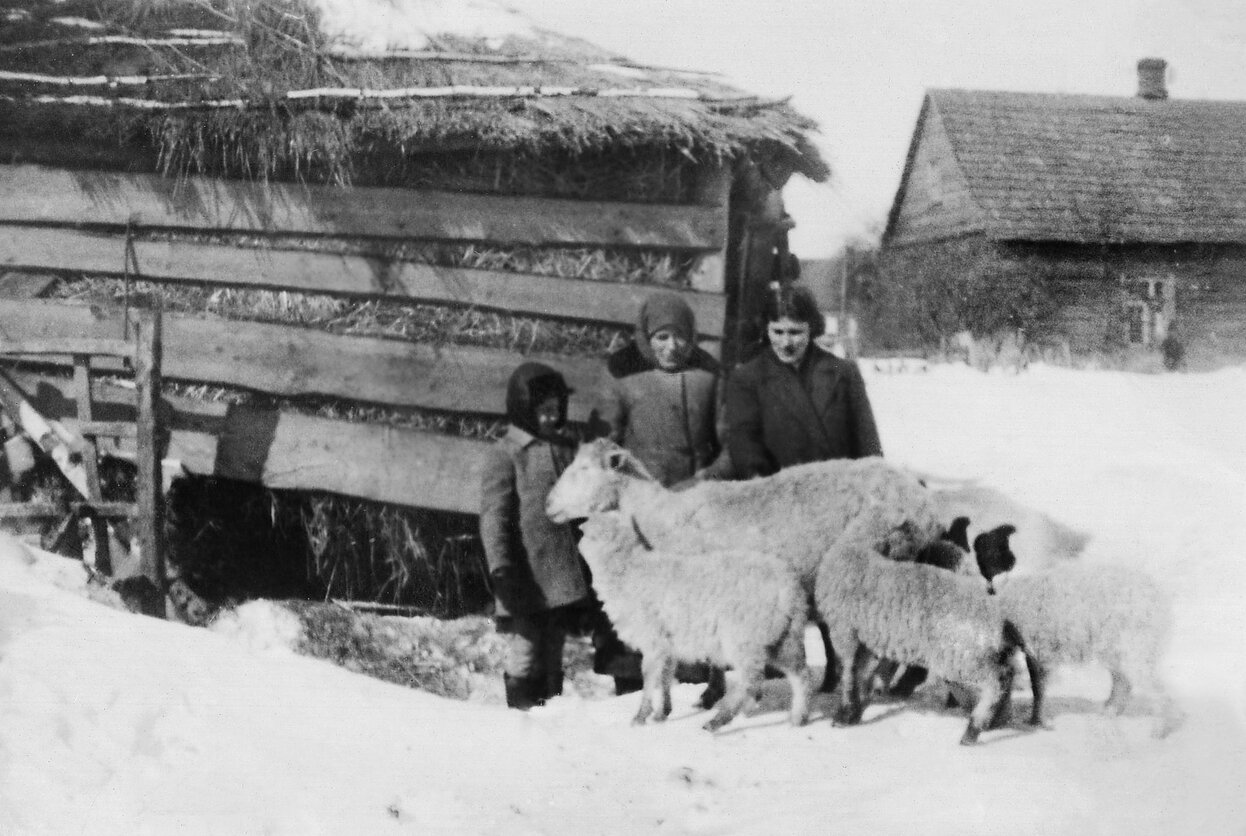 She said that her father had a sister whose husband was a drunkard and collaborated with the Soviets. He was jealous of Vitartai, who were successful farmers, and decided to slander them as supporters of Lithuanian freedom fighters, exposing them to deportation.

The Soviet soldiers that showed up at the family’s door allowed them to pack all the necessary things, as well as some food for the trip. The Vitartai, along with their daughter Laimutė and granddaughter Lidija, were then put in a truck that brought them to Šiauliai railway station.

There, it turned out that Lidija was not on the list of deportees. But the family could not get in touch with her mother, who was in Vilnius, and did not want to leave the girl to strangers. Her grandmother begged the soldiers not to separate the family. Eventually, they allowed the girl to travel together.

The family spent a month in a train car used for animal cargo before they reached their destination – Alzamay town in the Siberian Irkutsk province.

Danutė, who stayed in Vilnius, had to be informed about her family’s deportation. The way she found out about it sounds like an excerpt from a movie.

“We were in the carriage. Dad told me to find a piece of paper and a pencil. I wrote a letter addressed to Danutė and threw it through the window as we were passing Vilnius,” the sister said. “That piece of paper was found by a good person and delivered to Danutė.”

Later, Danutė told her family about the shock she experienced when a stranger passed her the letter with a note about her relatives’ deportation. She immediately went to Girelė village, where she found out that it was true.

Vitartaitė-Ruzgienė used her status as an accomplished sportswoman to bring her family back. At first, she contacted the head of the Sports Committee. He advised the woman to talk to Justas Paleckis, the chairman of the Presidium of the Supreme Soviet of the Lithuanian SSR whom she knew.

In his office, Vitartaitė-Ruzgienė fell on her knees and begged Paleckis to save her relatives. The chairman promised to resolve the issue and soon the family received permission to return.

A dossier found at the Lithuanian special archive confirms that four members of the Vitartai family were deported to Siberia on March 25, 1949. The file says that they were released on June 3 after the request from Danutė Vitartaitė-Ruzgienė was granted.

“If it weren’t for Lidija, we would not have been saved,” the sister said. 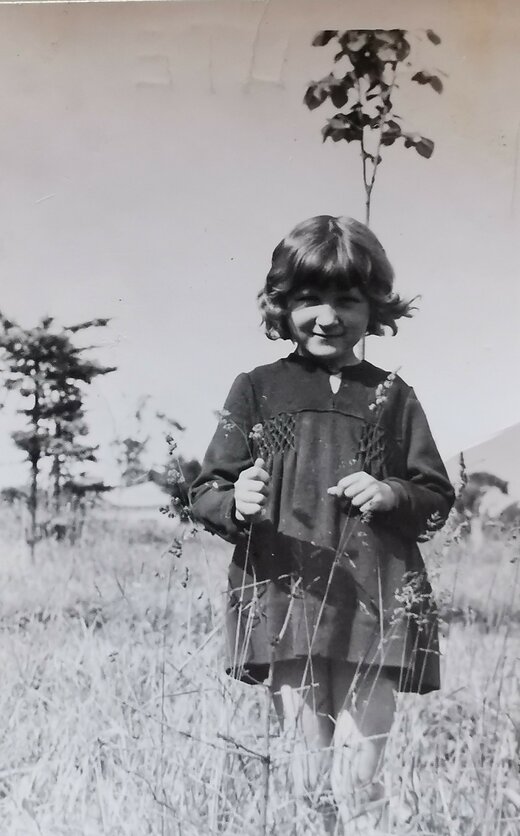 While his family was facing deportation, Ruzgys was starting his career in Western Europe. In 1950, the American-Lithuanian newspaper Draugas (Friend) ran an article about Ruzgys’ success in France.

“After the war, demobilised Ruzgys settled in Paris. He advocated for a much slower and thought-through basketball technique,” the article wrote.

“By organising courses and lectures in a number of French cities, producing leaflets on this modern technique, and demonstrating his skills in movies, he helped bring French basketball to a new level,” it added.

Except for this publication, there was not much information about Ruzgys’ life in Western Europe. But as I was considering to wrap up the investigation, the story suddenly picked up again.

“You could try looking into the internet forum where people are looking for relatives. Somebody there was looking for a person called Michel Ruzgis,” the message said.

The link attached to the response led to the Little Lithuania website. But the query about Ruzgys was written 15 years ago, which was not very promising.

However, I decided to search for the person who posted the message on the forum. A Google search directed me to the Swiss phone book which gave a phone number.

I called the number. An English-speaking woman who answered the phone was suspicious and thought I was a scammer. Only after telling her everything I knew about Ruzgys did I earn her trust.

“Yes, Ruzgys left Spain and came back to the US. His family hadn’t heard from him since,” the woman said finally.

“Are you talking about his family in Lithuania?” I asked.

“No. Mykolas Ruzgys had a family in Spain,” she replied. “He is the father of my husband.” 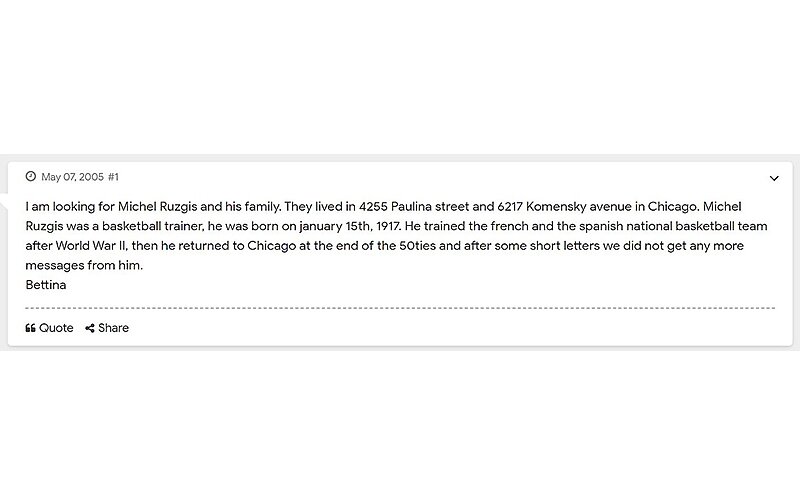 Screenshot of a forum entry. / LittleLithuania/screengrab

Part three of the story is coming soon. Read part one here.

Champion who disappeared. Wife begged to save daughter from Siberia as he fought Nazis in Europe