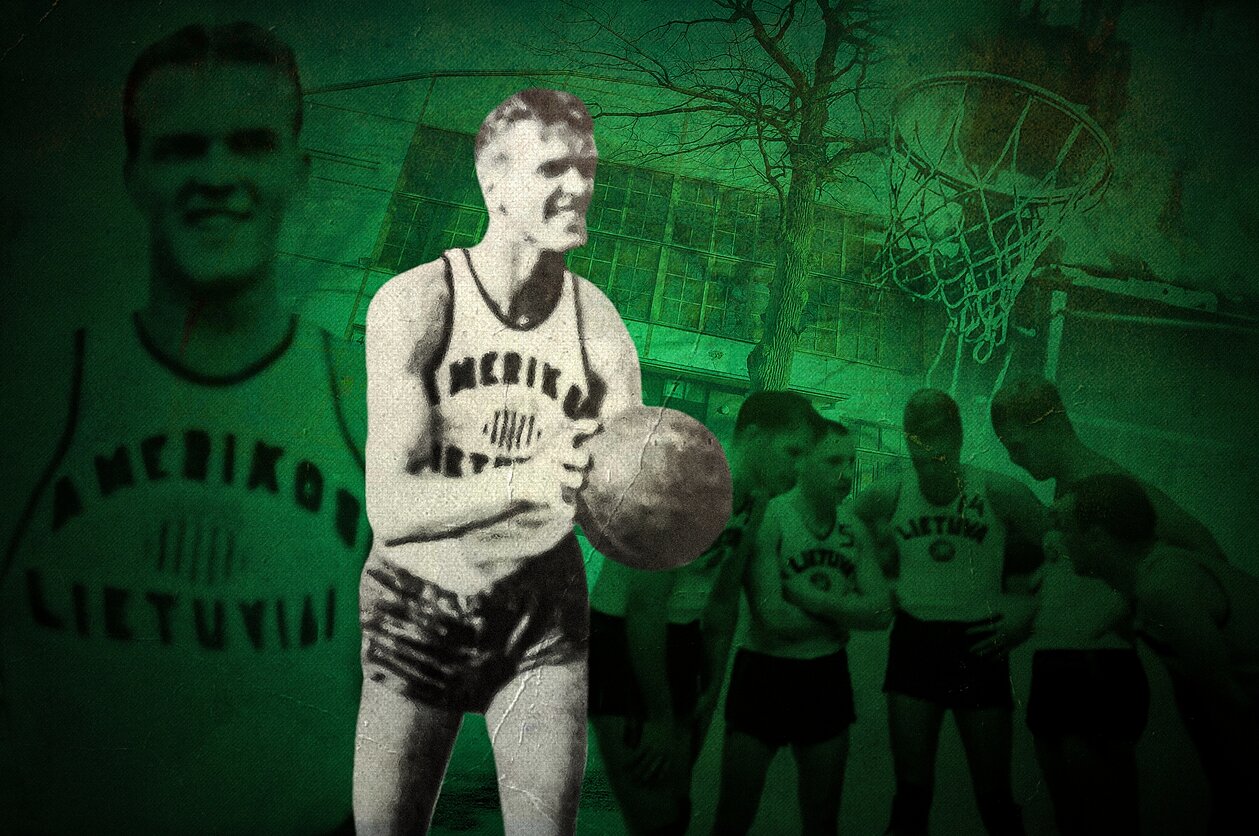 The life of Mykolas Ruzgys, an American-Lithuanian basketball player and European champion, reminds of a jigsaw puzzle with pieces spread all over the world. Fate dealt him a tragic hand, the consequences of which were also felt by his family.

LRT.lt presents a series on a newly discovered tragic life story of Mykolas Ruzgys. The first story covers his visit to Lithuania, sports achievements, and family.

Before the coronavirus crisis, I did not know much about Ruzgys. At the back of my mind was the fact that he played in the Lithuanian basketball team during the interwar period.

Then, I received a message from my friend Benas: “During the quarantine, I came across an astonishing basketball-related fact. Mykolas Ruzgys, who became a European champion in 1939, is alive and he is 105 years old,” he quoted a Wikipedia article on the basketball player. 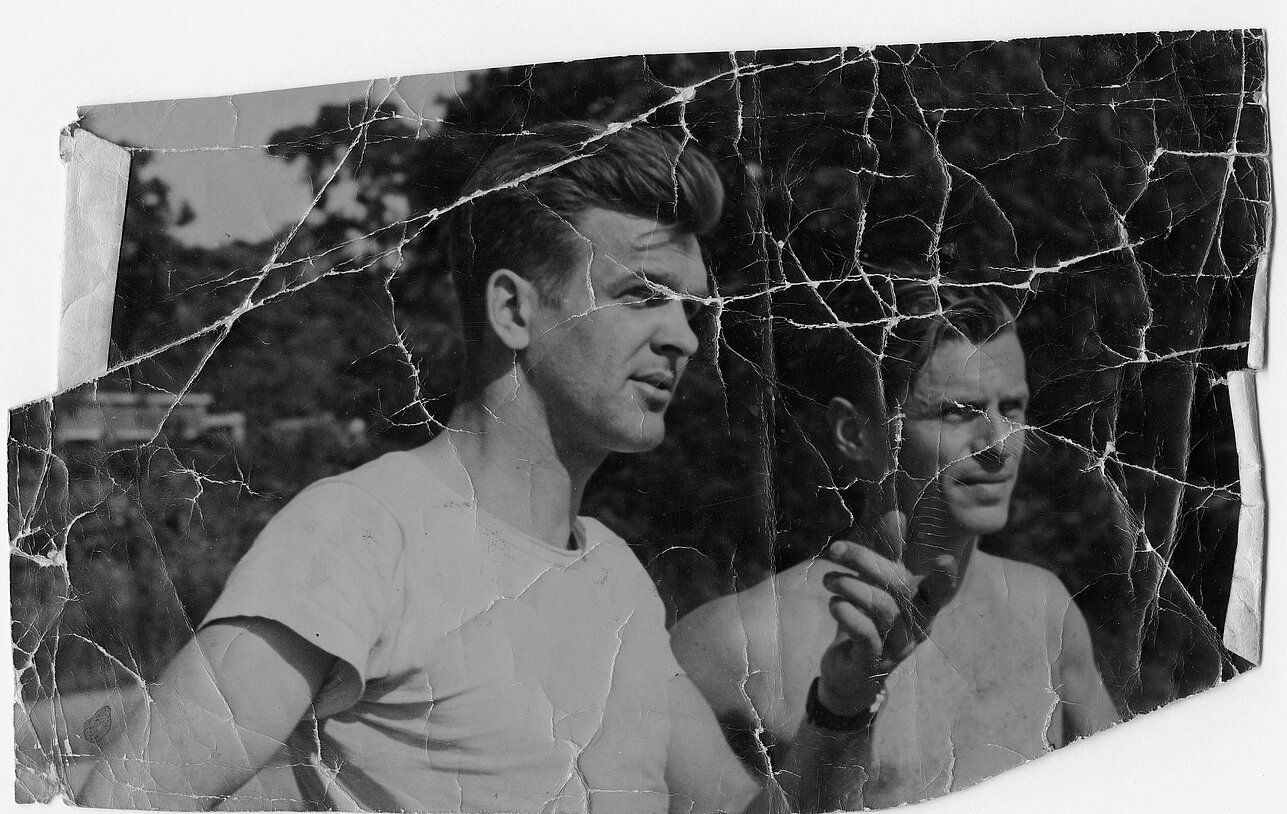 A search on the internet did not return Ruzgys’ death date but confirmed that all members of the 1939 Lithuanian basketball team have already passed away.

In the interwar period, the athlete trained French and Spanish national basketball teams. So why was he not remembered at the end of his life? This puzzling fact made me look closer into Ruzgys’ life.

First, I reached out to former Lithuanian president Valdas Adamkus. He was an active member of the post-war Lithuanian diaspora and sports organisations during his time in Chicago.

“Ruzgys was a very nice person. We spoke and met often,” Adamkus said. “He was talking about the beautiful time he spent in Lithuania, especially the 1939 championship. Lithuania was very dear to him.”

Adamkus remembered going to Ruzgys’ funeral, but could not give an exact date of when this happened.

A conversation with Algimantas Bertašius, a sports statistics enthusiast, revealed that during his short time in Lithuania, Ruzgys married Danutė Vitartaitė, who later gave birth to their daughter.

Algimantas remembered that Ruzgys’ daughter had a son, Tomas Preišgalavičius, who played in the Lithuanian national basketball league until his career was interrupted by an injury. He could not say much about his grandfather either.

“When I was 16, I went to the US and looked for my grandad’s grave in Chicago, but I could not find it,” Preišgalavičius said. “My mom and grandmother did not know his death date either.” 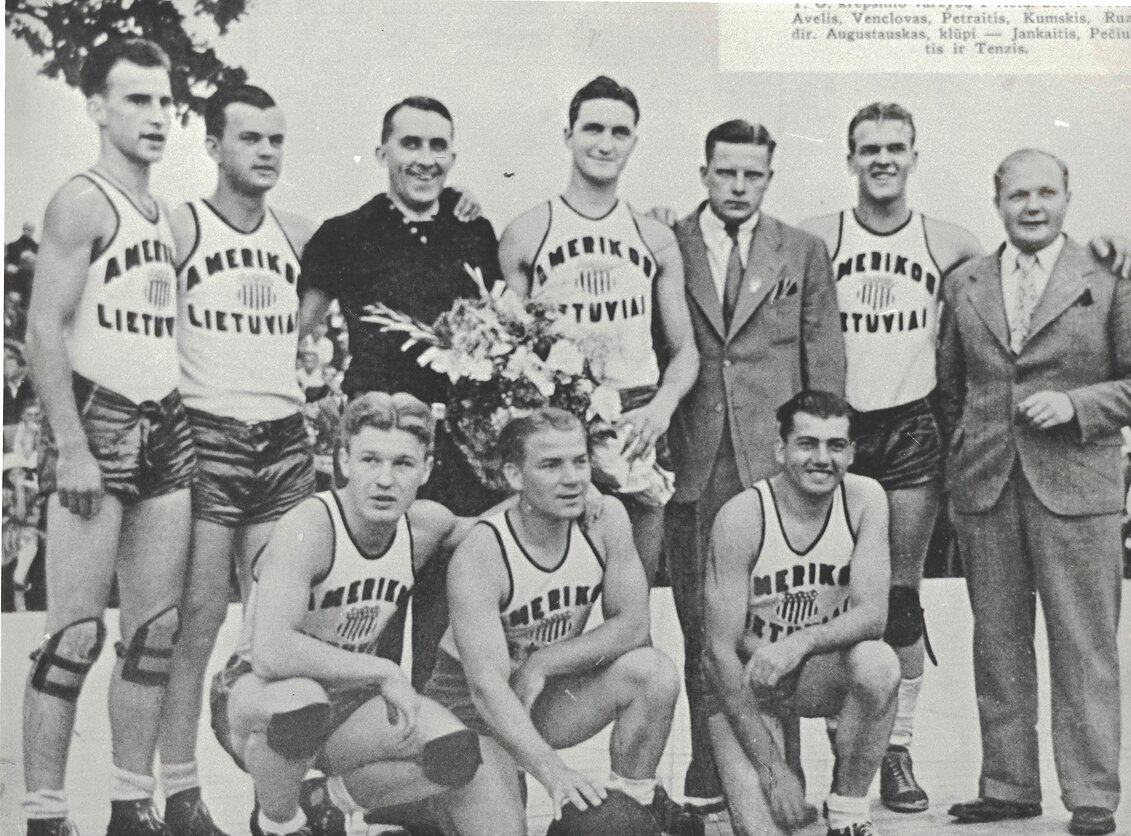 Ruzgys (second on the right) with the Lithuanian-American basketball team. / Lithuanian Sports Museum

Getting in touch with Karilė Vaitkutė, the head of Genealogy Department at Balzekas Museum of Lithuanian Culture in Chicago, gave a few more leads.

Documents discovered by Vaitkutė in museum archives said that Mykolas Paulius Ruzgys (Michael Paul Ruzgis) was born on January 15, 1919, although other sources often gave 1915 as his birth year. Ruzgys’ parents immigrated to the US from Tauragė, a town in western Lithuanian, at the end of the 19th century. The couple had seven children.

Museum archives also helped to establish Ruzgys’ death date. Documents showed that he died on December 15, 1986, in Chicago. They also assisted me in drawing a picture of the basketball player’s early life.

Ruzgys probably heard about the Lithuanian basketball team in 1937, during the European Championship. Before the tournament, Lithuanians were considered to be the weakest team to compete.

But the Lithuanians had strengthened their team by inviting Lithuanian-American basketball players to join. Such well-known athletes as Feliksas Kriaučiūnas (Phil Krause) and Pranas Talzūnas (Frank Talzunas) accepted the offer and helped Lithuania win the championship.

The historic victory made Lithuanians crazy about basketball. The following year, in 1938, the Lithuanian National Olympics, the largest interwar sports event, was organised in Kaunas. More than 2,000 sportsmen and sportswomen of Lithuanian origin from all around the world came to compete. The delegation from the US brought 25 athletes, including Ruzgys.

Ruzgys’ first performance in the country of his parents was very successful. The American-Lithuanian basketball team won the national Olympics, while Ruzgys scored almost half of the entire team points in the final.

After the Olympics, Ruzgys decided to stay in Lithuania a little longer and became a basketball coach. 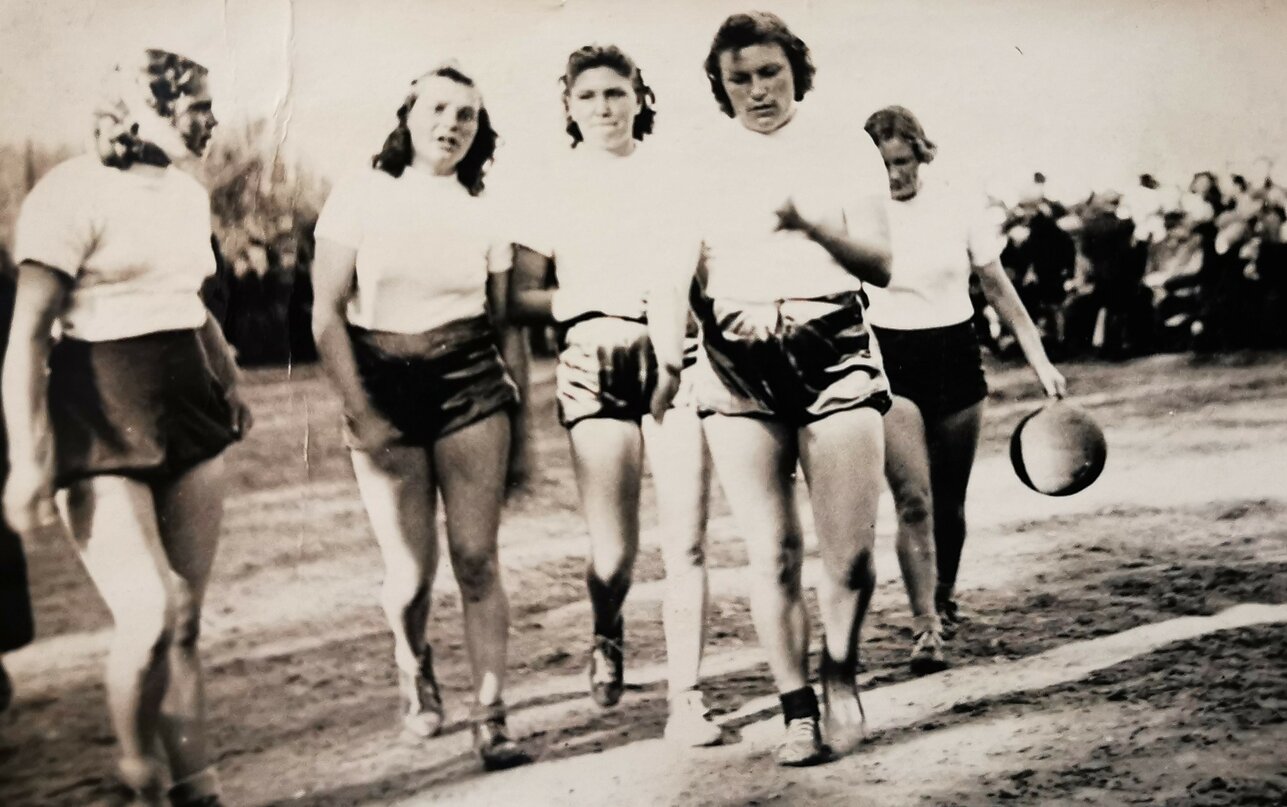 During his time in Lithuania, Ruzgys met his first wife Danutė Vitartaitė. They met accidentally through Leonas Karaliūnas, the founder of the basketball museum in Joniškis, a town in northern Lithuania.

I called Karaliūnas, who invited me to come to Joniškis. There, I found out about Laima Vitartaitė-Poželienė, the 89-year-old sister of Ruzgys’ wife, who was still alive and lived in Šiauliai. The following day, I was on the way to meet her.

The woman had a very lucid memory about events from 81 years ago. Her sister was born in 1919 and was a talented athlete. At the age of 19, she won one gold, four silver, and three bronze medals at the Lithuanian National Olympics.

Vitartaitė met Ruzgys in Kaunas, where she was studying the English language. They fell in love and got married in 1939. Initially, Vitartaitė’s parents opposed the marriage because they thought that Ruzgys’ profession was not serious enough. But the communicative and good-looking groom quickly turned them around, Vitartaitė’s sister said.

The woman remembered that Ruzgys always had a photo camera in his hands and was capturing everything around him. The sportsman, who came from Chicago with a population greater than the entire Lithuania, was fascinated by his parents’ country and planned to stay there. 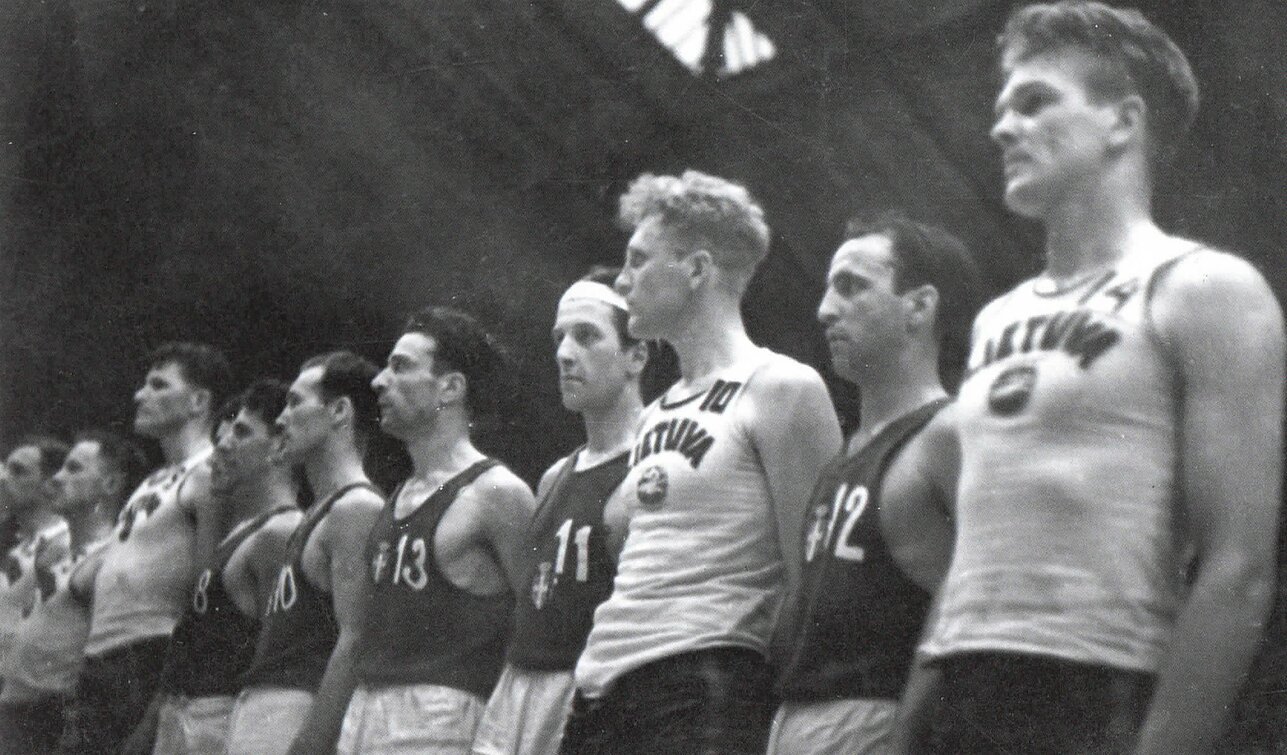 Mykolas Ruzgys, first on the right / Basketball Museum in Joniškis

Victory of a lifetime

In May 1939, the European basketball championship took place in Lithuania for the first time. Ruzgys played with the Lithuanian national team, was one of the best players of the tournament, and significantly contributed to Lithuania’s victory.

After the championship, Ruzgys’ life started to change. In March 1940, he played in the last national team match against Estonia and together with CJSO, a basketball club from Kaunas, became the Lithuanian basketball league champion.

On 15 June, the Red Army entered Lithuania and occupied the country. Americans who were in Lithuania at the time received a notice from the embassy about the worsening political situation, advising them to go back to the US. Initially, Ruzgys did not understand that he had to leave Lithuania and his pregnant wife behind.

This was confirmed by a letter written by Vitartaitė’s father to his granddaughter in which he refers to the events of 1940.

“Your father was an American citizen. He received a telegram from Kaunas. And then another one. But he did not go. When he received the third telegram, he started crying and I brought him to Šiauliai station. He went to Kaunas, was given 300 dollars, and returned to the US,” the letter read.

The sister of Ruzgys’ wife also recalled the day when she and her father brought her brother-in-law to the station.

“It was the last day of his visit to our village. He and Danutė cried when saying their goodbyes. My dad harnessed a horse […]. Danutė couldn’t come with us because the separation was too hard for her,” the woman said.

“He cried the entire way to Šiauliai railway station. […] He could not wait for the baby to be born. He expected a girl and wanted to call her Lidija,” she added.

The US immigration archives revealed that Ruzgys reached New York on August 28. His daughter Lidija was born on August 30. He never met her.

After his return to the US, Ruzgys put a lot of effort into trying to bring his family to the country. But while he was looking for ways to reunite with his wife and daughter, the family in Lithuania were hit by one tragedy after another.