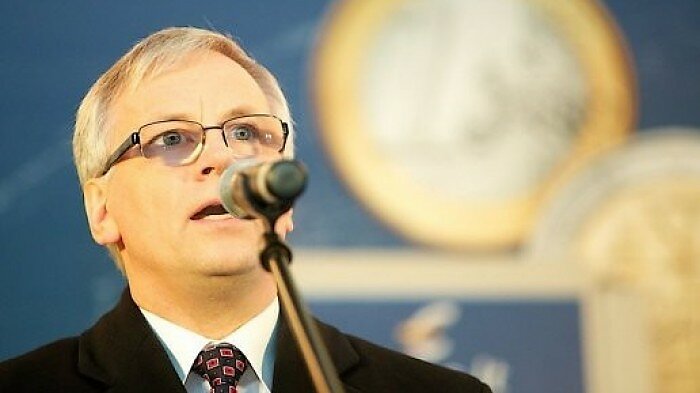 Lithuania has become the eurozone's 19th member, but only half of Lithuanians are in favour of the new currency. That will change, Finance Minister Rimantas Šadžius told DW, the Ministry of Foreign Affairs reports.

Lithuania has become the eurozone's 19th member, but only half of Lithuanians are in favour of the new currency. That will change, Finance Minister Rimantas Šadžius told DW, the Ministry of Foreign Affairs reports.

According to Šadžius, people have been talking about the euro crisis for quite a long time and during all that time, the eurozone has proven that it is resilient to external shocks, to internal tensions and strains. The finance minister believes that the eurozone has achieved a state where it can cope with the crisis by itself.

Šadžius said that Lithuania had a currency peg to the euro since 2002. The country has undergone all the challenges that the eurozone has had - internal devaluation, salary cuts, social benefit cuts during the financial crisis in real terms. But Lithuania could not use the benefits of the eurozone.

When asked what would change for Lithuanians after the euro adoption, the minister said that people would not have to pay exchange fees, while the state, private firms and individuals will have lower interest rates for borrowing. Meanwhile, investors used to calculate the return on investment by including risk premiums. Now the risk of the devaluation of the currency is removed, so the return on investment could be higher.

The minister added that although only half of the population thought that the changeover to the euro is good, the example of Estonia showed that the number supporters of the euro increased to 85 percent in two years. Šadžius believes that public support for the euro in Lithuania will be equally high.

Speaking about preventing price hikes, the finance minister said that prices were monitored very carefully. "What we see is higher prices in services. But that can be explained through pay rises of 4 to 5 percent annually. It is clearly not because of the euro. Other prices are stable or even decreasing because of many international economic factors like cheaper fuel and food. We also have very strict controls and there is also competition. We shall see, but monitoring of prices will continue throughout 2015," said Šadžius.

Furthermore, the finance minister was asked about Lithuania's economic situation in relation to the Russian sanctions. According to him, Lithuania had to downgrade its economic outlook quite considerably. For next year, just 0.9-percent growth is expected. Lithuanian firms that are exporting goods to Russia face difficulties. Lithuania had quite a significant flow of re-exports, the transit of goods, through Lithuania to Russia, which decreased as well.

On the other hand, Šadžius noted that just like after the first Russian crisis in 1998, firms were able to find new markets. They go west and euro adoption is a very favourable factor for them to look better for European markets.