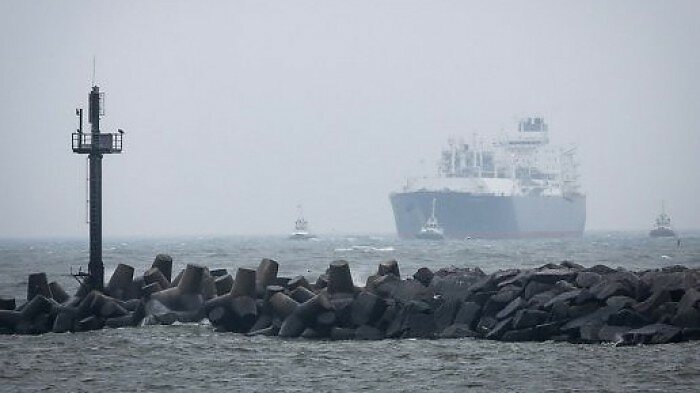 Launching of the liquefied natural gas (LNG) terminal that put an end to the monopoly of Russian and re-election of Dalia Grybauskaitė as Lithuania's president for the second term were the most important events of the year 2014, Lithuanian journalists and editors say.

Launching of the liquefied natural gas (LNG) terminal that put an end to the monopoly of Russian and re-election of Dalia Grybauskaitė as Lithuania's president for the second term were the most important events of the year 2014, Lithuanian journalists and editors say.

In a traditional survey carried out by BNS, respondents also referred to the decision on adoption of the euro, increase of defense spending, the failed referendum on land sale to foreigners and the Song Festival as other important events.

Journalists say the biggest effects on the global arena were this year caused by Russia's actions in Ukraine and the Islamic State group in Syria and Iraq.

"This year, Lithuania was largely influenced by aggressive actions of Russia. Security issues were high on the agenda during the welcoming of the LNG ship, the presidential election campaign and the discussions on euro adoption. The Crimean annexation by Russia shocked the international community, however, many in the West are even more concerned about the stronger grounds gained by the Islamists and the increased threat of terrorism," BNS editor Vaidotas Beniušis said.

The end of Gazprom era

Independence, the floating storage and regasification unit (FSRU), arrived in the Lithuanian port city of Klaipėda on Oct. 27, ensuring the first alternative to the Russian gas concern Gazprom that Lithuania has been accusing of raising prices for political reasons.

Lithuania will next year import 500 million cubic meters of LNG from Norway's Statoil next year, which accounts for about a fifth of the gas consumed in Lithuania per year.

Aurimas Perednis of the Žinių Radijas news radio noted that Russia often used the gas weapon against other countries, therefore, Lithuania "knocked out the manipulation ace from Gazprom, although it was a hasty move taken at a high cost."

The presidential elections in May proceeded without a major intrigue, however, Grybauskaitė, unlike five years ago, this time needed a run-off vote to defeat Social Democratic candidate Zigmantas Balčytis.

After the election, the president demanded sacking of suspicious vice-ministers, with non-affiliated candidates appointed as ministers of energy and interior affairs. Consequently, some political scientists started saying that the president is taking over government control functions from the parliament.

"Growing powers of the President's Office, as compared to other governance branches, is a tendency and a very important process, which proves that the system is restructuring in response to a fragmented coalition guided by dubious political values and a weak government," said senior editor at lrytas.lt news portal, Liudas Dapkus.

Rita Miliūtė of the national television LRT said Grybauskaitė's re-election proves that parties of Lithuania are at a political standstill.

BNS editor Jūratė Skėrytė and Klaipeda daily editor Saulius Pocius emphasized that the presidential elections were extremely important to the course of Lithuania's foreign policy in the context of the Ukrainian crisis.

Senior editor at alfa.lt news portal, Tadas Marciukaitis, noted that this was the first time when an incumbent president was re-elected for a second term in Lithuania's history, which means no major changes to the country's strategic policies.

Marielle Vitureau, a journalist at RFI (Radio France Internationale) radio station, then said adoption of the common EU currency will provide Lithuania with new opportunities and tie it closer to the European family.

Meanwhile, Anykšta daily's senior editor Gražina Šmigelskienė said that Lithuania's move to give up the national currency, litas, and sell land to foreigners, which was not stopped by referendum, are farewell to symbols of Lithuania's statehood.

Audrius Matonis, director of the LRT television news service, said the key events included "the breakthrough in the reinforcement of Lithuania's defense capacities and increased defense spending." Lithuania's defense budget is growing by a third in 2015.

Many journalists noted that increased military activity on Russia's side caused Lithuania to focus.

"The Baltic states are in the direct field of Russia's interest and in the closest zone of threat, furthermore, Lithuania is excessively dependent on Russia in fields of energy and economy. This caused us to concentrate and rethink our values and security as citizens and a state, as well as consider shifting our focus on other markets," said senior editor at DELFI news portal, Monika Garbačiauskaitė–Budrienė.

The revolution in Ukraine, subsequent annexation of Crimea and Russia's support to separatists were listed among key events of 2014 by all journalist and editors interviewed by BNS. Some of them also highlighted the downing of the Malaysia Airlines passenger jet above Eastern Ukraine controlled by separatists in July.

"The Russian aggression against Ukraine continued throughout 2014 and led to major changes to how we – European and Americans – view the relations with Russia, it destroyed the illusion that was is impossible in the 21st century and escalated the concerns in our security and made us recall the fundamental values of Western liberal democracy," said Romas Sadauskas-Kvietkevičius, editor at Druskininkų Naujienos daily and a columnist at DELFI news portal.

The sanctions introduced by the Western world following the developments in Ukraine and the decline in oil prices delivered a major blow on Russia's economy, and reviewers worldwide are trying to guess the effects it will have on Russia's policies next year.

Journalist at Lietuvos Rytas, Vytautas Bruveris, says "the process raises a reasonable question – is it the start of the latest phase of the collapse of the Soviet Union as the reconstructed dictatorship and imperialist Russian state, and the phase may have completely unpredictible and destructive consequences."

Struggle against the Islamic State, which the Western world is so far trying to undermine by airborne attacks and training of Iraqi forces, will remain among the most important challenges for the international community in coming years.

Foreign news editor at Lietuvos Rytas daily, Vaidas Saldžiūnas, said that Western countries fear "brainwashed terrorists" holding their citizenship, and the efforts against Islamists will deplete US resources, which would otherwise go to Southeastern Asia and the Baltic states

According to the survey, other key global events included the outbreak of the Ebola virus in Africa and the start of diplomatic relations between the United States and Cuba.

In an analogous poll a year ago, respondents said that Lithuania's presidency of the EU Council was the key event in Lithuania, while election of Pope Francis was the most important global event of 2013.